Where does Chicken Little invest?

Editor’s Note: If there’s one thing Terry Burnham is known for on this page it’s predicting a plunge in the stock market. Specifically, he first forecast in July 2013 that the Dow Jones Industrial Average would hit 5,000 before it hit 20,000. He stood by that expectation in May 2014, again in July, when the Dow was above 17,000, and just this past February, after the Dow had surpassed 18,000.

Burnham’s the first to admit that his steadfastness in the face of the Dow’s rise has taken a toll on his emotional and physical well-being. “I feel a deep malaise, causing (in my mind at least), a low grade cough, sallow complexion, irritability and an impaired immune system,” he wrote earlier this year.

A long-time critic of the Fed’s bond-buying program, Burnham is a former Goldman Sachs trader, biotech entrepreneur, money manager and economics professor at Harvard’s Business School and Kennedy School of Government. He’s the author of “Mean Genes” and “Mean Markets and Lizard Brains” and now teaches at Chapman College.

Today, Burnham returns to Making Sen$e to explain more about his own investing philosophy. Keep reading to find out how this Wall Street doomsayer is building his nest egg.

Paul Solman has dubbed me the “Chicken Little of Finance.” I have tentatively embraced this nickname since it seems better than the “Finance Professor who Cried Wolf.”

Why would I disclose something as personal as my own investments? Economists love the idea of ‘revealed preference,’ which means that behavior reveals actual interests better than words. For example, I may say that I hate U.S. stocks, but you will see below that I own a few of them. In addition, my experience as a professor has taught me that most people learn by accumulating individual stories, and not from grand theories. So here is some of my story as an investor.

One note of caution, however. No one should copy my investments. I believe that each investor should develop a set of investments that fits with his or her circumstances and psychology. Even if you agree 100 percent with my heterodox view of the world, I suggest you make changes in your own financial position in a gradual and thoughtful manner.

With that motivation, the following chart represents my current investment position. This is my real financial position, not some target allocation or paper recommendation for other people. 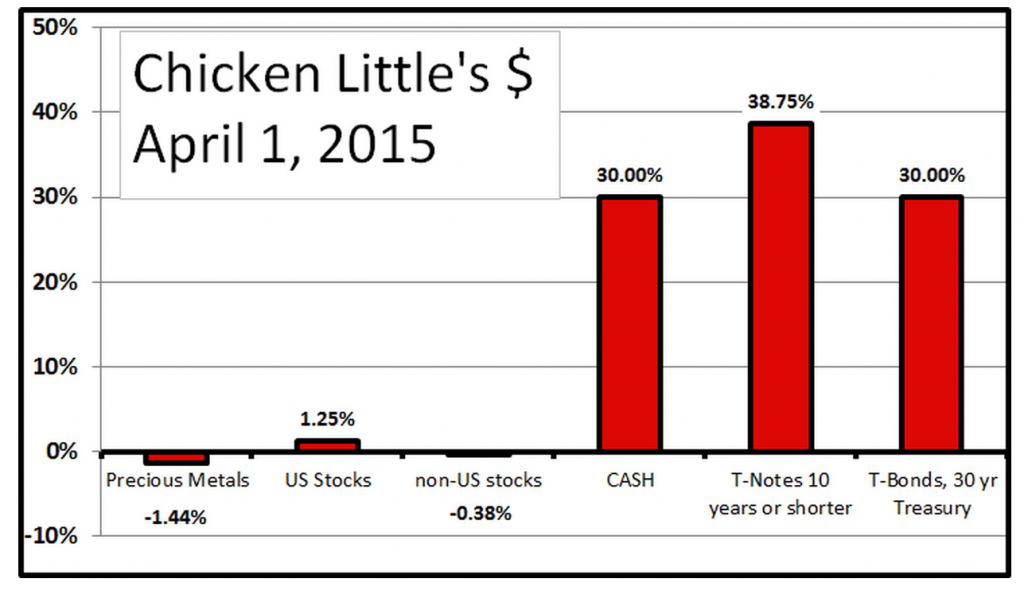 Let me explain the positions, and then provide a very brief summary of the investment logic.

Whenever I make trades in my real investment account, I will mirror those trades in my account on howthemarketworks.com. The two accounts will not have the exact same return because, for example, I buy my Treasury bonds directly from the U.S. government with no commission or fees. In the public portfolio, I cannot buy bonds from the government. Instead I have to buy a proxy for those bonds (in this case managed by Vanguard). The Vanguard Exchange Traded Fund has some fees, and will not have exactly the same return as the bonds that I own directly. In most cases, the public portfolio and my actual investments will have returns that are very close to each other.

I believe that an economic depression is coming that will be worse than the Great Depression of the 1930s.

The short version of my investment approach is: one, invest consistent with a macroeconomic opinion, and two, invest with momentum.

So what do I mean by a macroeconomic opinion? I believe that an economic depression is coming that will be worse than the Great Depression of the 1930s. Its form is not yet determined, but much like Dan Akroyd chooses the Stay Puft marshmallow man as the destroyer in “Ghostbusters,” the Federal Reserve can choose between an inflationary or deflationary U.S. depression.

I continue to expect that the U.S. economy will disappoint and the Dow will hit 5,000 before it hits 20,000 (here is a fairly recent TV interview that iterates my original prediction on Making Sen$e). If and when that economic disappointment is recognized by the asset markets, I expect Treasury bond prices to rise and U.S. stock prices to fall.

Markets have momentum. When I teach investments, I allow my elementary-school-aged children to compete secretly against my college students. My children are trained only in technical analysis and pick their positions by looking at price charts. One year, my then six-year-old daughter won first place in the contest (beating me, 60+ college students, and her older sister, who came in second). My winning daughter gave her victory speech saying, “The trend in silver was so clear that a blind man could see it.”

Momentum is an attribute of asset markets. For example, gold prices went down for more than 20 years beginning in 1979, then gold prices rose every year for a decade before peaking in 2011. After World War II, and before the financial crises, U.S. housing prices rose for more than half a century. U.S. Treasury bond prices have been rallying for more than 30 years. U.S. stock prices are in their sixth year of increase.

My approach is to invest with momentum. If I feel a market is near some turning point, I will generally move away from that market, but I do not try to gain directly from predicting a turn.

How does a macro momentum investor invest in the shadow of a looming economic depression? Courtesy of bigcharts.com, here are charts for ETFs for the Dow Jones Industrial Average for long-term U.S. Treasury bonds. 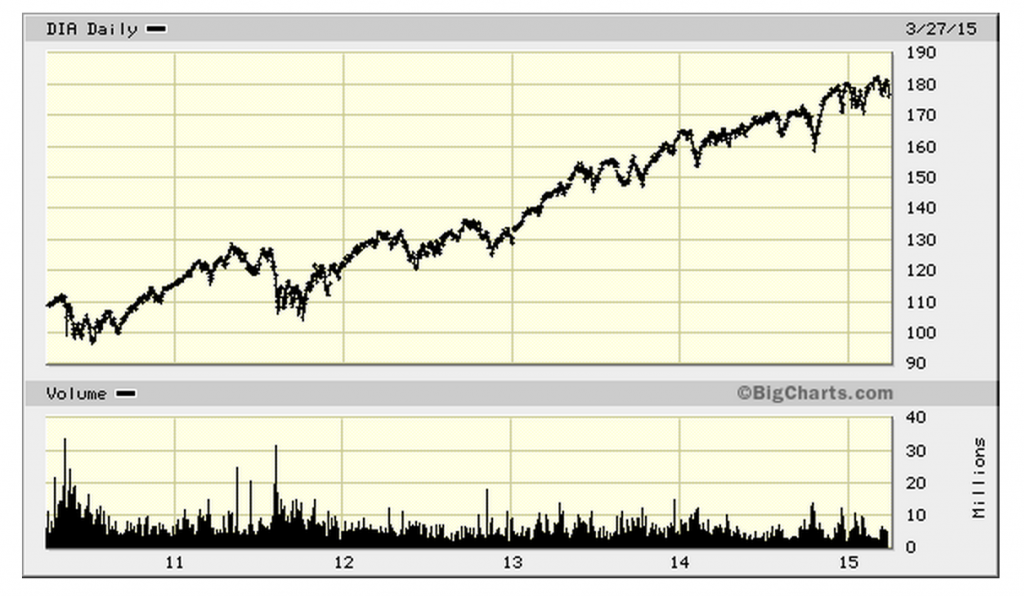 The Dow Jones Industrial Average ETF chart goes from lower left to upper right. This is a bull market in U.S. stocks. Courtesy of bigchartsmarketwatch.com. 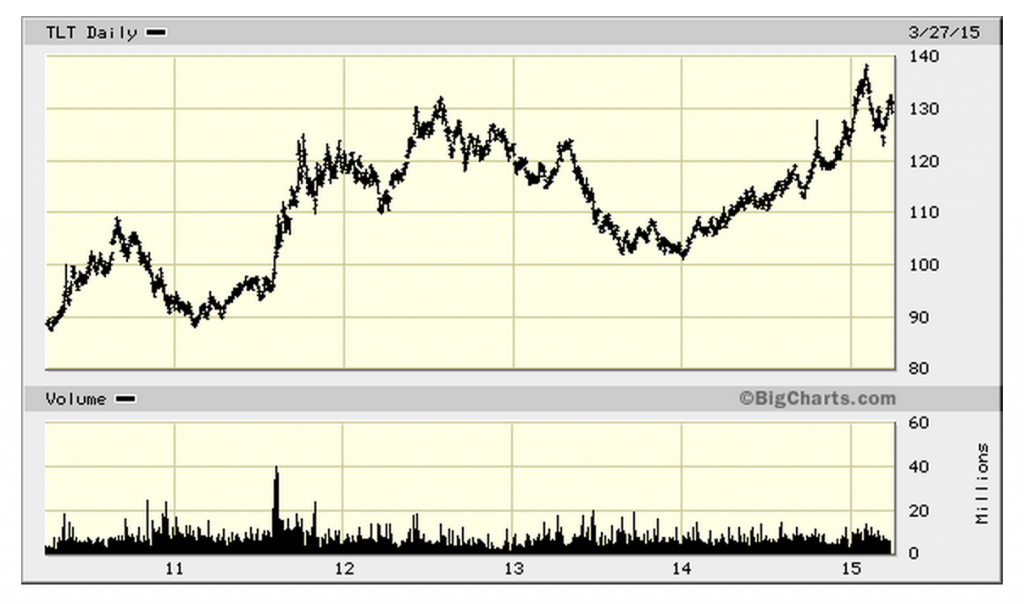 The long-term Treasury bond ETF chart goes from lower left to upper right. Although the chart is not as easy to read as the chart of U.S. stocks, I interpret this as a bull market in U.S. Treasury bonds. Courtesy of bigchartsmarketwatch.com.

My macroeconomic views predict falling U.S. stock prices and rising U.S. Treasury bond prices. I choose to make my one risky investment in the U.S. Treasury market because that investment is consistent with momentum. I continue to believe that U.S. stocks will fall, but claim no ability to know when that decline will begin. To paraphrase “The Grandfather”‘s Don Corleone, predicting market turns is a little bit dangerous.

There are three risks to any bond position:

Whether she will or not remains to be seen. But it’s a risk that I am taking.

Left: Paul Solman calls Terry Burnham the "Chicken Little" of finance because of his repeated predictions that the Dow will plummet. So how does Burnham invest his own money? Today, he explains. Photo by Chris Clor/Blend Images via Getty Images.