This year, laws with roots to the Civil War prevented 6.1 million from voting

Donald Trump won the presidential election on Tuesday as millions of people were prevented from voting this year by rules that root back to the Civil War and were made to maintain white male political dominance.

About 6.1 million people who were convicted of breaking laws could not cast ballots because of policies that keep felons off voter rolls, according to justice reform organization The Sentencing Project. And according to the most recent numbers from Florida, Wisconsin and Michigan, which is still counting, Hillary Clinton lost by a margin smaller than those banned from voting — many of whom are poor or black or both, which are groups that tend to vote Democrat.

At the same time, Clinton garnered at least half a million more votes than Trump, but lost the Electoral College. This system gives each state a number of votes roughly proportioned to population — 538 in total — and the candidate who wins the majority of them, which will be officially counted in January, wins the election. The last time such an anomaly happened was during the hotly-contested 2000 presidential election, when Republican George W. Bush won the Electoral College, defeating Democrat Al Gore, who won the popular vote.

In 1787 James Madison introduced the Electoral College as an alternative to a popular vote system because, “Negroes” in the South presented a “difficulty … of a serious nature.”

A constitutional scholar says that these historical laws may have helped elect Trump, who is lauded by the Ku Klux Klan, an endorsement he renounced this month.

“To the extent that people are surprised by this result, it is because liberal whites have underestimated the past and continuing importance of racism and sexism as founding principles of the country,” said Juan Perea, a law professor at Loyola University Chicago.

Perea recalled the history of black disenfranchisement, which was safeguarded when several Southern states resisted the abolition of slavery and formed the Confederacy, following the 1860 election of Abraham Lincoln. Then came the Civil War.

Photo from the “Proceedings of the Constitutional convention of South Carolina, held at Charleston, S. C., beginning January 14th and ending March 17th, 1868.” Book in the collection of University of South Carolina Coleman Karesh Law Library, courtesy of Internet Archive

As more than half a million soldiers and slaves died and the Confederacy lost, the U.S. passed the 13th Amendment to the Constitution, formally abolishing slavery. But there was one catch – they could only be free if they had not committed a crime.

A South Carolina constitutional convention chairman reminded his colleagues in 1868 that disenfranchisement allowed them to, “deprive every colored man of their right of citizenship” by making “the most trivial offence a felony” in the state.

By 1869, 29 states had enacted disenfranchisement laws. 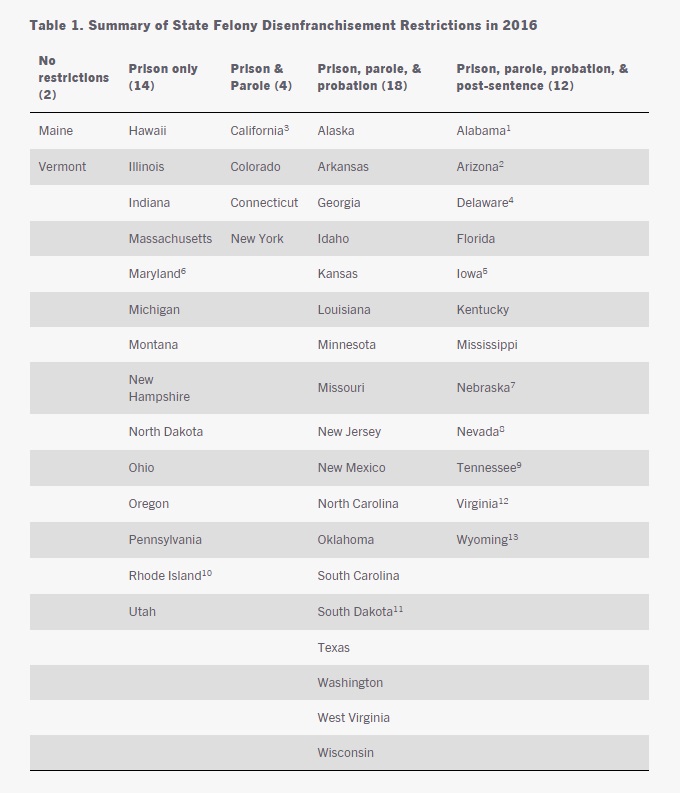 Notes:
1. Alabama – In 2016, legislation eased the rights restoration process after completion of sentence for persons not convicted of a crime of “moral turpitude.”
2. Arizona – Permanently disenfranchises persons with two or more felony convictions.
3. California – In 2016, legislation restored voting rights to people convicted of a felony offense housed in jail, but not in prison.
4. Delaware – The 2013 Hazel D. Plant Voter Restoration Act removed the five-year waiting period. People convicted of a felony, with some exceptions, are now eligible to vote upon completion of sentence and supervision. People who are convicted of certain disqualifying felonies – including murder, bribery, and sexual offenses – are permanently disenfranchised.
5. Iowa – Governor Tom Vilsack restored voting rights to individuals who had completed their sentences via executive order on July 4, 2005. Governor Terry Branstad reversed this executive order on January 14, 2011 returning to permanent disenfranchisement for persons released from supervision after that date.
6. Maryland – Eliminated the ban on voting for persons on probation or parole supervision in 2016.
7. Nebraska – Reduced its indefinite ban on post-sentence voting to a two-year waiting period in 2005.
8. Nevada – Disenfranchises people convicted of one or more violent felonies and people convicted of two or more felonies of any type.
9. Tennessee – Disenfranchises those convicted of certain felonies since 1981, in addition to those convicted of select crimes prior to 1973. Others must apply to Board of Probation and Parole for restoration.
10. Rhode Island – A 2006 ballot referendum eliminated the ban on voting for persons on probation or parole supervision.
11. South Dakota – State began disenfranchising people on felony probation in 2012.
12. Virginia – When the Virginia Supreme Court overturned Governor Terry McAuliffe’s blanket restoration of voting rights for people who had completed their sentences, he individually approved voting rights for 12,832 individuals in August, 2016.
13. Wyoming – Voting rights restored after five years to people who complete sentences for first-time, non-violent felony convictions in 2016 or after. Courtesy of The Sentencing Project

“Fast forward to the present, and, in this election, 6 million otherwise-eligible voters were unable to vote because of felon disenfranchisement,” said Perea. “Had these felons been able to vote, and if they voted as their non-felon people of color did, the results of the election would have been different.”

Trump supporters are primarily white, and historically, white people have felt threatened by change, responding by creating laws and voting to maintain supremacy, he said.

“The election of Barack Obama and changing demographics pose a very direct threat to these core founding values, held by many Americans,” Perea said. “The failure to understand and acknowledge the deep history of American racism leads to underestimation of its current existence and impact.”

According to The Sentencing Project, all but two states have disenfranchisement laws that strip people convicted of felonies of rights such as being able to run for office, sit on a jury or vote.

In Florida, once a Confederate state that now has some of the strictest voting rights policies, one in every four black people are disenfranchised, among one of the highest ratios in the nation, according to The Sentencing Project.

It also has the most disenfranchised voters – about 1.6 million, with one-third of them black – and is a state where Clinton needed approximately 120,000 more votes to win its 29 electoral votes.

“It would be too hard to say precisely how they would vote,” said Executive Director Marc Mauer. “[But] these are disproportionately low income people and that’s viewed as more Democratic in general.” 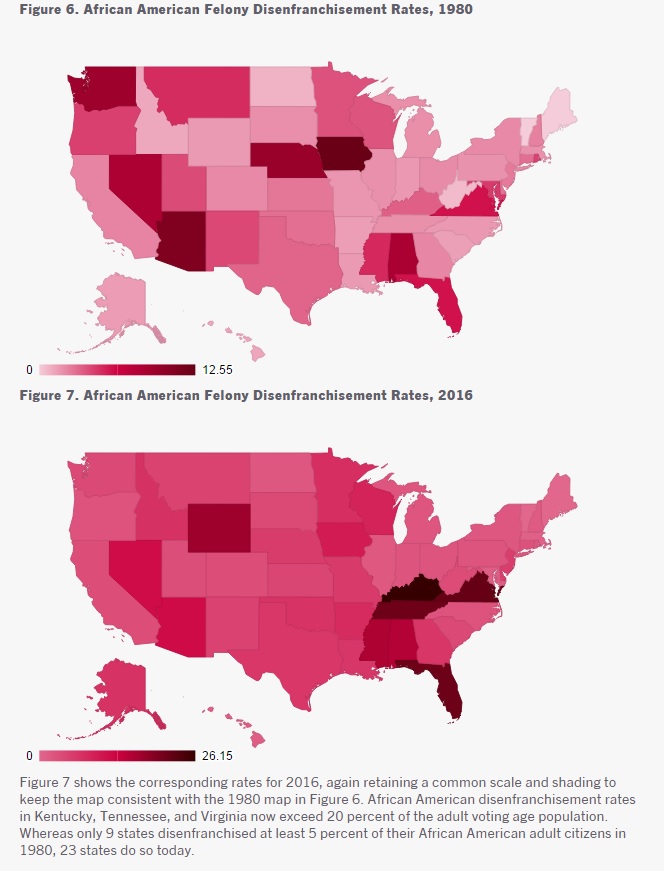 Courtesy of The Sentencing Project

The question frustrates black Florida resident Desmond Meade, who lived on the streets after serving time for aggravated battery and possession of a firearm.

Meade, President of the Florida Rights Restoration Coalition, said that stories about disenfranchised voters too often focus on black people, when especially in Florida, a large percentage of them are white.

“My problem is, is that however an American citizen may vote or may think, should have no factor in if they had a right to vote,” he told the NewsHour Weekend. “Americans from all walks of life believe in second chances … I met an old white lady who said her greatest fear was that she was going to die before she had the opportunity to vote again.”

Florida is also the same state that was contested in 2000, when Gore lost the election. Researchers Christopher Uggen and Jeff Manza estimated in an article for the American Sociological Review that if disenfranchised voters had been able to vote, they could have overwhelmingly swung the state.

But Perea said liberals should be more shocked about the disproportionate number of disenfranchised voters and restrictions in the South than of Bush’s or Trump’s win.

The Sentencing Project has estimated that the number of people affected by these laws has grown from 1.1 million in 1976 to approximately 2.5 percent of the country’s voting-age populace today. Mauer said 23 states have enacted some kind of reform, but Florida is unique because their policy is embedded in the state Constitution that was drafted in 1838.

“It’s quite difficult to change the Constitution,” he said.

Cartograms distort the land area on the map according to an alternative statistic, in this case the total felony disenfranchisement rate. Southeastern states that disenfranchise hundreds of thousands of people who have completed their sentences, such as Florida, Kentucky, and Virginia, appear bloated in the cartogram. In contrast, the many Northeastern and Midwestern states that only disenfranchise individuals currently in prison shrivel in size. Courtesy of The Sentencing Project

There has been a movement for a National Popular Vote Interstate Compact that has gained traction since Gore lost in 2000. New York overwhelmingly agreed in 2014 to join nine other Democratic states and Washington, D.C. Together, they have 165 electoral votes. If they gain a total of 270 — the majority needed to elect a president — the nation will move to a popular vote.

“Still, nobody cared about felons,” Perea said. “The only reason liberals might care now is because they lost.”