The statistic is stark, heartbreaking and unacceptable. According to the Department of Veterans Affairs, 18 veterans commit suicide every day — about one every 80 minutes. Many suffer from post-traumatic stress disorder, which plagues their thoughts, invades every aspect of their lives and disables some to the point where death is preferable to living through the nightmare. It was once called shell shock and thought to be a byproduct of cowardice. It is now understood to be a natural reaction to astonishing stress, to seeing things that no one ought to ever see.

“There’s a lot of things that I’ve seen, a lot of things that veterans see during war in a combat zone that are honestly some of the ugliest things you would ever see, that you could ever even imagine — inhumane actions that are done by a veteran themselves that just make them feel like monsters,” said Marine Corps veteran David Keefe. “The only people who are going to understand are veterans themselves. They feel like a community, so they can integrate into society.”

Keefe is the director of the Combat Paper Project at the Printmaking Center of New Jersey. Combat Paper started in 2007 by Drew Cameron, an Iraq War veteran and artist, and Drew Matott, a paper-maker, to reckon with Cameron’s service. They cut the uniform off Cameron’s body, made pulp and turned the pulp into paper.

During the past five years, Combat Paper has helped many veterans make sense of their experiences in a constructive, safe and artistic environment. Now, Combat Paper has its first permanent East Coast home at the Printmaking Center of New Jersey, about 45 minutes west of New York City. Another project is underway on the West Coast.

At first blush, cutting up a military uniform may seem like an unsettling concept. Could this be seen as disrespect toward the uniform? In no uncertain terms, Keefe said no. “They are taking that uniform and transforming it into something better so they can live a healthier life. I find no disrespect in that,” Keefe said.

Keefe outlined a four-stage process, a full-spectrum experience where the physical and emotional remnants of service are made one. 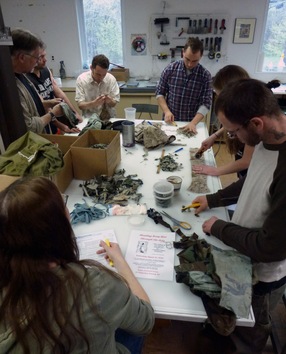 A veteran first cuts up his or her uniform. This represents the deconstruction of past military experiences. The paper-making in the second stage marks the reclamation phase. The veteran is making something new — paper — out of something that is old — a uniform and all experiences good or bad associated with it. In the third stage, the paper is used to create art and marks the communication phase. This is where the veteran can tell their stories through art and poetry. The paper provides the platform, the larger community of veterans provides the confidence and support to undergo this transformation.

I’d heard about the Combat Paper Project from Kyle Conley, a former Marine and combat comrade of Keefe’s who I’ve known for more than 30 years. After Sept. 11, Conley volunteered for the Marine Reserves. In early 2003, Conley was in that first wave of troops who raced in across the deserts of Iraq. He later served with Keefe in Iraq’s Anbar Province and patrolled the Euphrates River during 2006-2007, a harrowing era of a barely contained civil war.

Conley had told me of those days on the river, of close-quarter combat where insurgents lurked 15 feet away. He spoke of a creeping, episodic sensation that he’d seen and felt things there — awful things — that echo at home. He wrote me in mid-March to tell me about Combat Paper, and soon after, I sat in an empty, suburban New Jersey art studio on the first Sunday in April as the soft strains of bluegrass pickin’ drifted through the room.

The first veteran to arrive was Sarah Mess, who served in Somalia at a field hospital in 1993. She also was pressed into combat duty. You can see in her face and eyes a strain still present nearly 20 years after that “humanitarian mission” in the Horn of Africa. It should also be known for the war it was, Mess said.

“I never fed one (expletive) kid,” she said with a rueful, sardonic tone. “We were sent there not even having a clue or being briefed that we were going into combat.” Mess said the “grim reaper” — as she called PTSD — rears its ugly head when triggered by certain circumstances. She comes to the Combat Paper Project in part to quell that feeling of dread.

Veterans of four American conflicts — Vietnam, Somalia, Afghanistan and Iraq — ranging in age from the mid-20s to late 60s eventually trickled in. There were occasional tears but surprisingly more broad smiles and cheer. The veterans gathered around the cutting table, shredding uniforms and letting the stories flow. An unburdening that is itself a catharsis many have sought and, before now, not found.

Walter Zimmerman, a Vietnam-era Air Force veteran, never saw combat — he was at a computer work station in Iceland — but he came to honor a friend’s son who was horribly disfigured in Afghanistan. 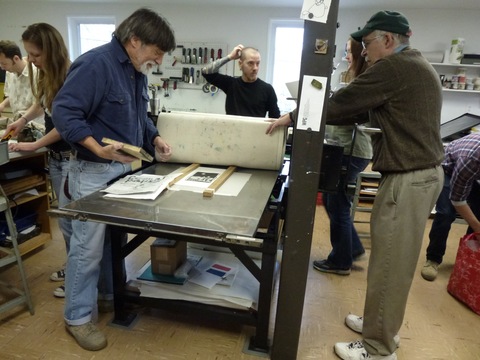 “He was driving a truck along with six or seven other people, and they hit a roadside bomb,” Zimmerman said. “Two people were instantly killed, and my friend’s son was so badly burned that they were sure that he was dead — but he wasn’t. The only skin that was left on his body was underneath his helmet.”

Zimmerman sat with his friend as she cared for her son at a San Antonio military hospital. “I was thinking … that this is one room, you know, one room — one person in one room in a hospital. You multiply that — you just multiply that,” he said.

Zimmerman said the Combat Paper Project offers him and — more importantly — younger veterans the chance to unburden themselves of the suffering they have witnessed and endured.

Nearby, Vietnam veteran Walt Nygard worked with Iraq veteran and early Combat Paper acolyte Eli Wright on a linoleum block print Nygard made of a soldier walking toward the horizon. It’s entitled “Pacem in Terris” — Peace on Earth.

On this morning in New Jersey, there is some.

Photos by Morgan Till.

Tune in to Monday’s NewsHour broadcast for more on the Combat Paper Project. You can get a sneak peek of the report here: