The U.S. Army Corps of Engineers announced Sunday it will temporarily halt construction of the controversial Dakota Access pipeline as it awaits a full environmental impact review of the project in North Dakota.

The Corps on Sunday announced it would not approve permits for an easement through federal land that were filed by the Texas-based pipeline owner, Energy Transfer Partners LP, which plans to run a portion of a crude oil pipeline under a reservoir near the Standing Rock Sioux Reservation.

The announcement comes a day before the evacuation deadline set by the U.S. Army Corps of Engineers and the North Dakota governor’s office, which ordered protesters stationed for weeks near a pipeline construction site to leave the encampment by Dec. 5, and as thousands of U.S. military veterans vowed to protect the group, comprised of members of the Standing Rock Sioux Tribe and supporters.

“The department of the Army will not approve an easement that will allow the proposed Dakota Access Pipeline to cross under Lake Oahe,” said Standing Rock Sioux Tribal Chairman Dave Archambault. “Instead, the Corps will be undertaking an environmental impact statement to look at possible alternative routes.”

The $3.8 billion pipeline would stretch nearly 1,200 miles through four states, including portions of federal land in North Dakota that the Standing Rock Sioux Tribe considers sacred ground and part of their land under the terms of a 1851 treaty. The planned route also would run under Lake Oahe, which was created through a dam along the Missouri River. Lake Oahe runs for 231 miles from Oahe Dam in South Dakota to Bismarck, North Dakota.

The project, which would transfer more than 500,000 barrels of crude oil each day 90 feet below the Missouri River, has been widely criticized by protesters for posing a risk to clean drinking water and disregarding tribal sovereignty. 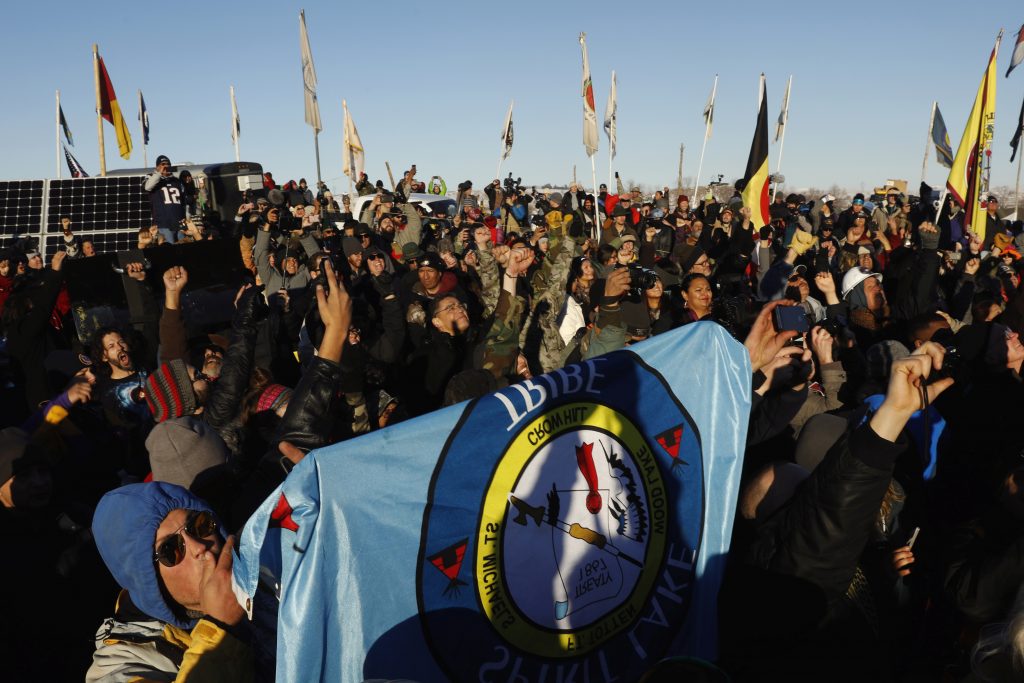 Native American and visiting “water protectors” celebrate that the Army Corps of Engineers has denied an easement for the $3.8 billion Dakota Access Pipeline inside of the Oceti Sakowin camp as demonstrations continue against plans to pass the Dakota Access pipeline near the Standing Rock Indian Reservation, near Cannon Ball, North Dakota on Dec. 4, 2016. Photo by Lucas Jackson/Reuters

On Sunday, U.S. Attorney General Loretta E. Lynch said the Department of Justice would continue to monitor a standoff between police and protesters and would “stand ready to provide resources to help all those who can play a constructive role in easing tensions.”

“The department remains committed to supporting local law enforcement, defending protesters’ constitutional right to free speech and fostering thoughtful dialogue on the matter,” she said, in a statement. “We recognize the strong feelings that exist in connection with this issue, but it is imperative that all parties express their views peacefully and join us in support of a deliberate and reasonable process for de-escalation and healing.”

U.S. Secretary of the Interior Sally Jewell said in a statement Sunday that she supported the decision to delay construction of the pipeline.

“The thoughtful approach established by the Army today ensures that there will be an in-depth evaluation of alternative routes for the pipeline and a closer look at potential impacts, as envisioned by NEPA (National Environmental Policy Act),” she said. “The Army’s announcement underscores that tribal rights reserved in treaties and federal law, as well as Nation-to-Nation consultation with tribal leaders, are essential components of the analysis to be undertaken in the environmental impact statement going forward.”

In a statement, U.S. Sen. Bernie Sanders lauded President Obama “for listening to the Native American people and millions of others who believe this pipeline should not be built.”

“In the year 2016, we should not continue to trample on Native American sovereignty,” he said. “We should not endanger the water supply of millions of people. We should not become more dependent on fossil fuel and accelerate the planetary crisis of climate change. Our job now is to transform our energy system away from fossil fuels, not to produce more greenhouse gas emissions.”

Left: Native American demonstrators celebrate that the Army Corps of Engineers denied an easement for the $3.8 billion Dakota Access Pipeline inside of the Oceti Sakowin camp as demonstrations continue against plans to pass the Dakota Access pipeline near the Standing Rock Indian Reservation, near Cannon Ball, North Dakota, on Dec. 4, 2016. Photo by Lucas Jackson/Reuters