Death toll from wildfires reaches 33 on the West Coast

SALEM, Ore. — Nearly all of the dozens of people reported missing after a devastating blaze in southern Oregon have been accounted for, authorities said, as crews continued to battle wildfires that have killed at least 33 victims from California to Washington state.

The flames have destroyed neighborhoods, leaving a barren, gray landscape in their wake, driven tens of thousands of people from their homes and cast a shroud of smoke over the region.

The crisis has come amid the coronavirus outbreak, the economic downturn and nationwide racial unrest that has led to protests in Portland for more than 100 days.

“What’s next?” asked Danielle Oliver, who had to flee her home outside Portland. “You have the protests, coronavirus pandemic, now the wildfires. What else can go wrong?”

Late Saturday, the Jackson County Sheriff’s office said that four people had died in the wildfire that burned in the Ashland area. Authorities earlier this week said as many as 50 people could be missing from the blaze. But they said the number of people unaccounted for is now down to one. 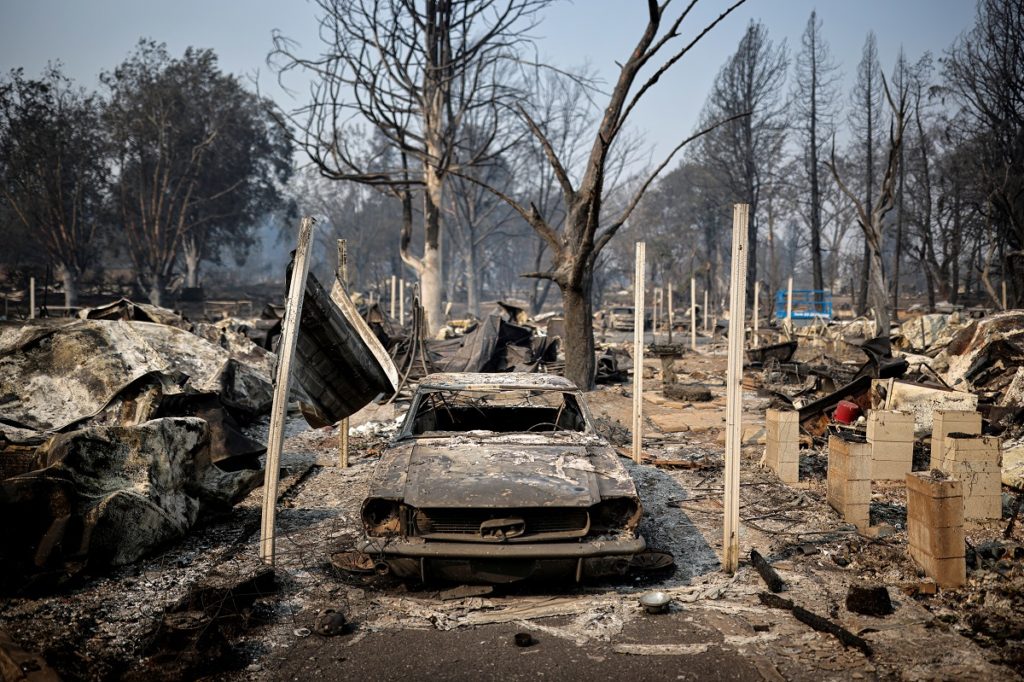 Burned car is seen in a neighbourhood after wildfires destroyed an area of Phoenix, Oregon, U.S., September 10, 2020. REUTERS/Carlos Barria

At least 10 people have been killed in the past week throughout Oregon. Officials have said more people are missing from other blazes, and the number of fatalities is likely to rise. Twenty-two people have died in California, and one person has been killed in Washington state.

Among the people killed was Millicent Catarancuic, who was found near her car at her five-acre home in Berry Creek, California. At one point she was ready to evacuate with her dogs and cats in the car. But she changed her mind as the winds seemed to calm and the flames stayed away.

Then the fire changed direction, rushing onto the property too quickly for her to leave. She died, along with her animals.

“I feel like, maybe when they passed, they had an army of cats and dogs with her to help her through it,” said her daughter, Holly Catarancuic.

George Coble lost everything just outside Mill City, Oregon — his fence-building business, five houses where his family lived and a collection of vintage cars, including a 1967 Mustang.

“We’ll just keep working and keep your head up and thank God everybody got out,” Coble said. 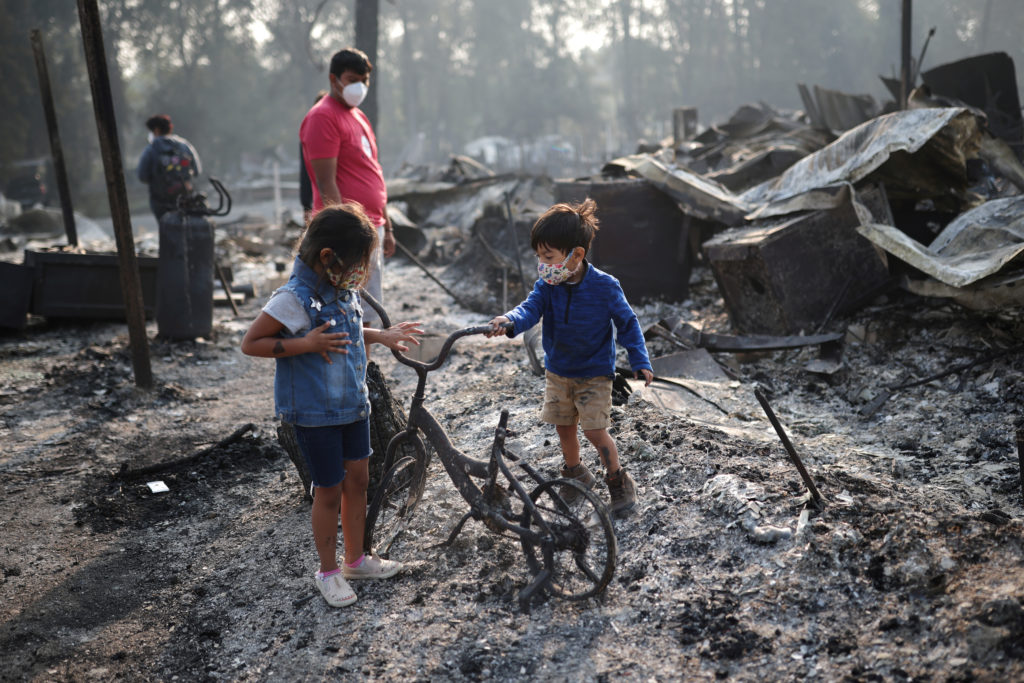 In a town nearby, Erik Tucker spent the day coated in ash and smudged with charcoal, hauling buckets of water through what remained of his neighborhood to douse hot spots.

Fire-charred landscapes looked like bombed-out cities in Europe after World War II, with buildings reduced to charred rubble piled atop blackened earth. People caught in the wildfires died in an instant, overcome by flames or smoke as they desperately tried to escape.

The Democratic governors of all three states have said the fires are a consequence of global warming.

“We absolutely must act now to avoid a future defined by an unending barrage of tragedies like the one American families are enduring across the West today,” said Democratic presidential candidate Joe Biden.

The dry, windy conditions that fed the flames in Oregon were probably a once-in-a-generation event, said Greg Jones, a professor and research climatologist at Linfield University in McMinnville. The warmer world can increase the likelihood of extreme events and contribute to their severity, he said.

There was some good news Saturday: The same smoke that painted California skies orange also helped crews corral the state’s deadliest blaze this year by blocking the sun, reducing temperatures and raising humidity. 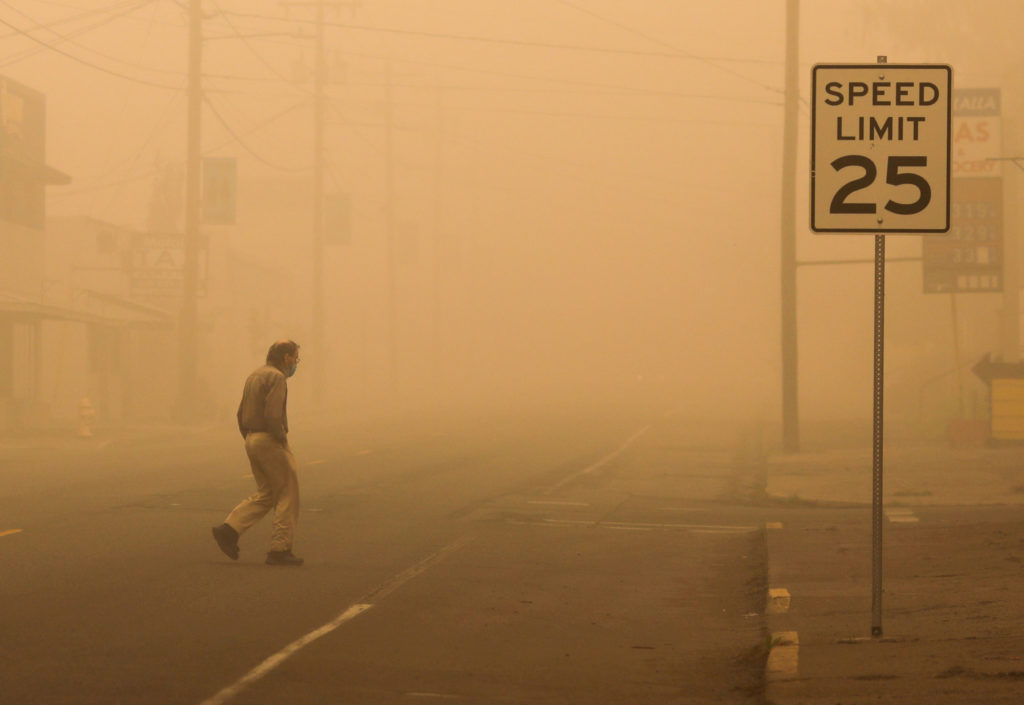 A man walks through a street in the town where about 10,000 residents were evacuated as the fire continues, in Molalla, Oregon, U.S., September 11, 2020. Photo by Carlos Barria/Reuters.

Smoke created cooler conditions in Oregon as well. But it was also blamed for creating the dirtiest air in at least 35 years in some places, “literally off the charts,” the state’s environmental quality spokesperson, Laura Gleim, said.

In Portland, smoke filled the air with an acrid metallic scent like pennies. It was so thick that Ashley Kreitzer could not see the road when she headed to work as a driver for a ride-hailing service.

People stuffed towels under door jambs to keep smoke out or wore N95 masks in their own homes.

Meanwhile, there was political turmoil as Oregon’s fire marshal was forced out while a half-million state residents were ordered to evacuate or warned to be ready to leave. Details were scarce on why he was put on leave, then resigned.

Left: Tracy Koa puts her hands together in gratitude as she and her partner David Tanksley arrive to find their home gutted by the Almeda fire in Talent, Oregon, U.S., September 12, 2020. “We lost everything but at least we have our family. Thank God we left when we did,” Koa said. Photo by Adrees Latif/Reuters.