Just after 10 a.m. EDT on Feb. 1, a group of inmates took four staff hostage as they seized control of Building C at the James T. Vaughn Correctional Center in Smyrna, Delaware, with 120 prisoners inside.

By the end of the 18-hour standoff, Sgt. Steven Floyd Sr. was dead.

The state has shared little information about the attack and now, “All 120 are considered suspects,” said Jayme Gravell, a corrections spokeswoman. But lawmakers and human rights groups tell completely different stories about what led to the uprising and how to move forward.

“We have been begging for help for years.” — Correctional Officers Association of Delaware union president Geoff Klopp

Republican Rep. Steve Smyk said corrections officers had recently been on the receiving end of a one-two punch. The first came in August, when the state Supreme Court ruled that Delaware’s death penalty was unconstitutional because it allowed a judge’s sentence to supersede a jury’s. One month later, the state settled a lawsuit, agreeing to improve mental health care for inmates and significantly reduce how much time they spend in solitary confinement.

Correctional officers were already overworked and understaffed, Smyk said, and the settlement piled on more responsibility while empowering inmates, many of whom claim mistreatment by the officers.

“The reality is that inside the facility you have people that are very dangerous and that’s why they are in the facility and they have nothing to lose,” he said. “And now they can make a great statement by taking the life of one of the [correctional officers].”

At the same time, national and local human rights lawyers who are in collaboration say that such a narrative is detached and dismissive of the people most affected by prison policies: inmates.

A ‘combustible’ situation in Delaware prisons

Delaware is the country’s second-smallest state, with a population of just under 1 million, but incarcerates at a rate about 15 percent higher than the national average. It houses approximately 7,000 inmates across four state facilities that have been understaffed for many years, a key focus in annual reports by the Delaware Department of Correction. In 2015, there were 86 staffing vacancies among the prisons — an improvement from the previous year, when there were 132. 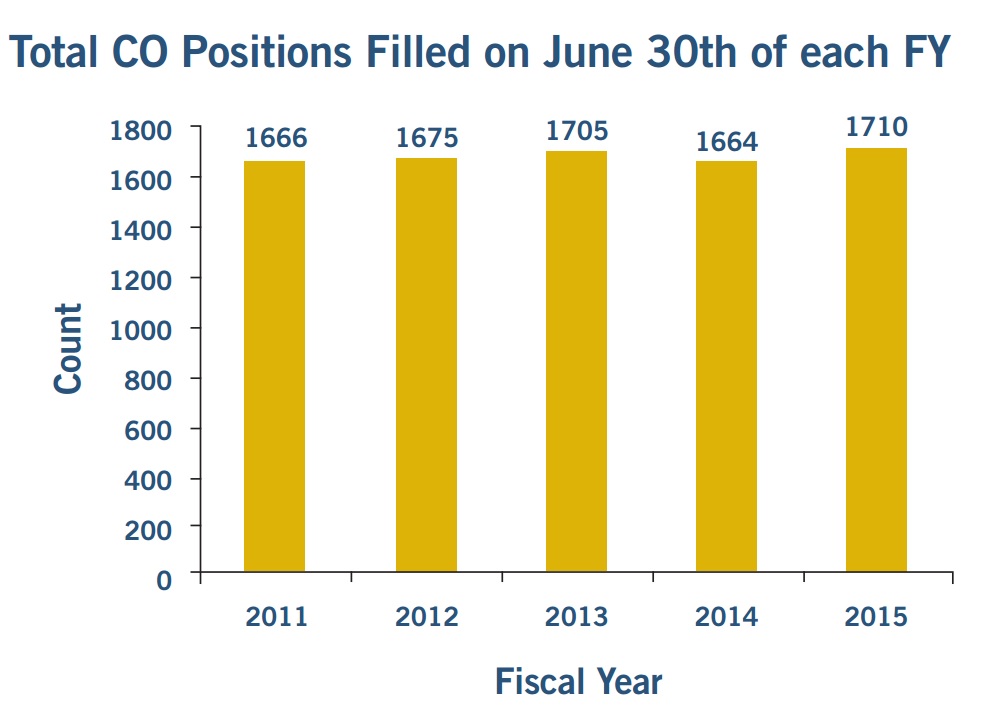 Graphic courtesy of Delaware’s Department of Correction 2015 annual report. “While staffing levels have increased incrementally since 2011, it should be noted that the Department continues to operate at a substantial vacancy rate,” the report notes.

Starting salaries for corrections officers are in the low thirties, which contributes to a high rate of staff turnover — the work is too stressful to accept these wages, said Correctional Officers Association of Delaware union president Geoff Klopp.

“We have been begging for help for years,” Klopp said. “A lot of basic security operations are overlooked and superseded and when it goes on for so long, it’s a cancer that continues to eat at you.”

This also has a direct effect on how people on the inside are treated, says a swath of human rights lawyers who started comparing notes as soon as they heard about the uprising. The National Lawyers Guild assembled a team to sift through summaries of hundreds of letters written to local groups by inmates over the years and is talking to people documenting what is going on inside the prisons.

“The focus of discussions of the Vaughn uprising thus far has been misplaced,” said Stanley Holdorf, supervising attorney for the guild’s Prisoners Legal Advocacy Network. “The emphasis should be on the conditions that preceded the uprising: what factors precipitated the incident, and how conditions of confinement at Vaughn can be improved.”

Holdorf said he has entered more than 500 letters into a database from just the last year, documenting whether they include complaints about discrimination, excessive force or one of 17 other forms of mistreatment.

“Staff was underpaid and overworked … You mix that up, you have a combustible kind of situation.” — Rev. Christopher Bullock of the Delaware Coalition of Prison Reform and Justice

“We are receiving consistent and widely-corroborated reports of flagrant and ongoing abuses inside the facility, to include physical abuse of prisoners by staff and other serious rights violations,” Holdorf said. “Such acts can only worsen the situation.”

These stories are decades old to the local chapter of the American Civil Liberties Union and the Delaware Coalition of Prison Reform and Justice, which includes the National Association for the Advancement of Colored People and political officials.

One Sunday morning in 2003, an elderly woman told Rev. Christopher Bullock, who founded the Canaan Baptist Church and the Delaware Coalition of Prison Reform and Justice, that her grandson in prison had a headache, but the prison refused to give him Tylenol.

“I said, ‘OK, I’ll pray for him,’” Bullock said. “Then she came back the next week and said the same thing.”

Bullock started talking to inmates and hearing that people with serious medical conditions such as HIV/AIDS were being neglected.

“Inhumane violations of human and civil rights, not to mention moral rights,” he said.

Then in 2004, a prisoner at the Vaughn facility held a counselor hostage in her office and raped her. After nearly seven hours, officers shot and killed the offender.

The correctional officer sued the state, saying it willfully ignored staffing shortages and security lapses that contributed to the incident. The state settled in 2005 for $1.65 million.

Amid damning news reports, the state started issuing a series of recommendations to improve safety that highlighted understaffing and the lack of mental health resources in prisons.

In 2006, after being called on to investigate some of the problems, the U.S. Department of Justice signed an 87-point agreement with the state, agreeing to overhaul the prison healthcare system. In 2012, the department confirmed that Delaware had complied with the terms of the agreement.

But Bullock said the letters continued to get grislier and more frequent – people wrote that they were being beaten, prevented from using hot water or having hot meals withheld in the dead of winter. Instead of getting one or two letters from inmates a month like he did in 2003, he started getting as many as 10 every month.

“Staff was underpaid and overworked,” he said. “You mix that up, you have a combustible kind of situation.”

In 2015, the ACLU with another human rights group filed a lawsuit on behalf of more than 100 prisoners with mental illness being held in solitary confinement, which the lawsuit said exacerbated their ailments.

And then the Supreme Court, after finding the death penalty unconstitutional, ruled that the 12 inmates on death row at Vaughn would not be executed.

Smyk said this is why, “the inmates know they have the upper-hand.”

Some lawmakers want to bring back the death penalty

Regardless of the cause, Bullock says that the uprising has made a bad situation worse. His church held a town hall meeting with hundreds of people who were either formerly incarcerated or related to people who are. He likened some of the complaints he heard to torture.

Inmates are being rounded up by people in masks, pepper-sprayed and not just beaten, he said, but humiliated.

A Delaware Department of Correction spokeswoman said the latter complaint was untrue, but did not provide comment on the former. Gov. John Carney’s office declined to comment on specific claims citing pending litigation.

The attorney representing Floyd’s wife and family as well as the other hostages also said he is planning to file a federal lawsuit on their behalf this coming week.

Bullock has written two letters to the U.S. Department of Justice, asking it to intervene again, to which it has said it will use consider whether to open another investigation.

Then on March 27, even though Carney said during his campaign last year that he opposed capital punishment and would let the Supreme Court’s ruling stand, he revised his stance. 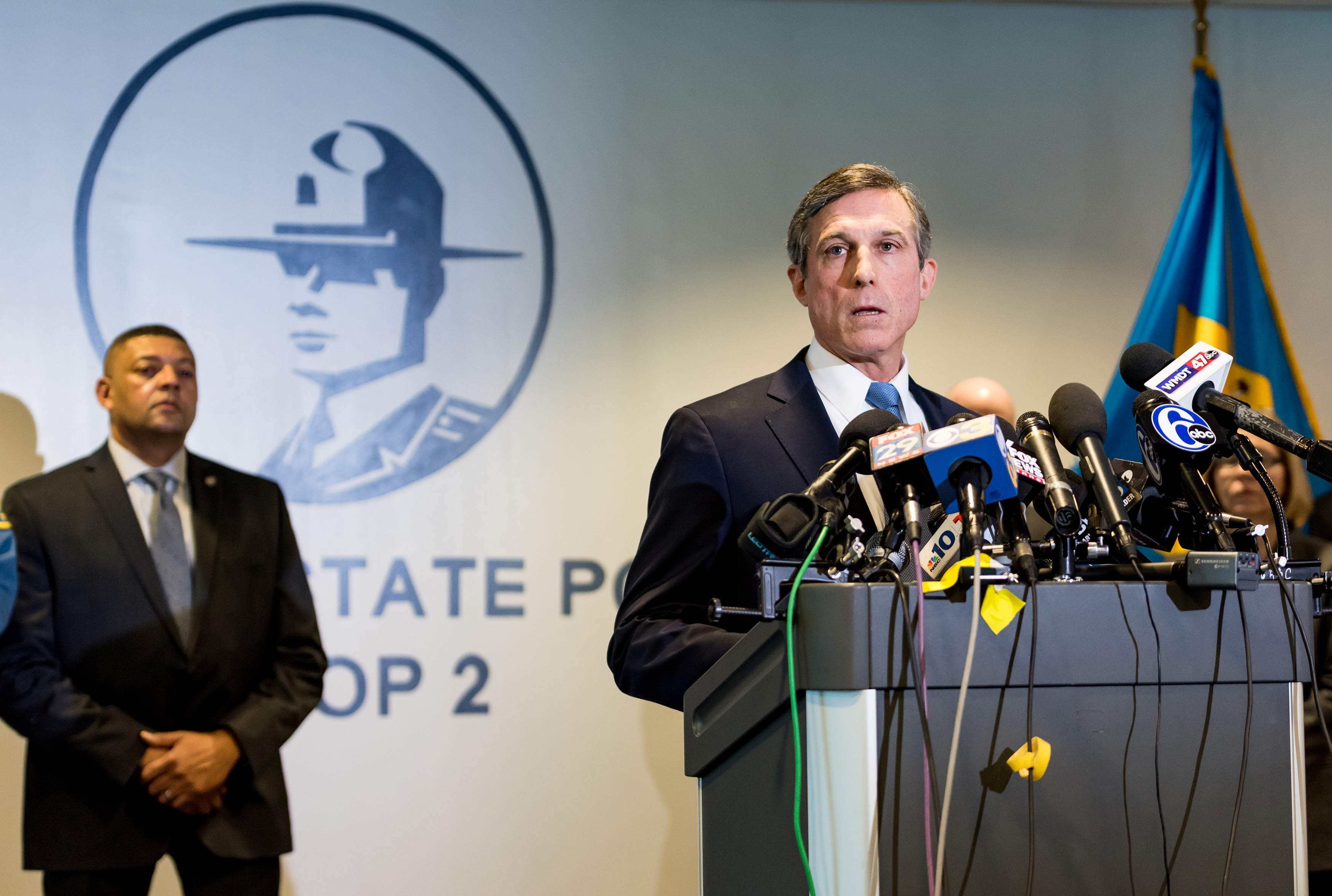 Delaware Governor John Carney speaks during a news conference about a hostage incident and killing of a prison guard in Glasgow, Delaware, on Feb. 2, 2017. Photo by Doug Curran/Reuters

“I wouldn’t rule out, however, supporting a death penalty that applied only to those convicted of killing a member of law enforcement,” Carney said in a statement responding to reports about reviving the death penalty. “In some cases – specifically behind prison walls – capital punishment may be our only deterrent to murder.”

Seven days later, Smyk introduced House Bill 125, calling it the Extreme Crimes Protection Act, to ensure the state’s capital punishment process abides by constitutional standards. If it passes and Carney signs it into law, it would revoke Delaware’s status as the 19th and most recent state to abolish the death penalty.

No one interviewed for this piece disagrees that prison workers in Delaware are underpaid and overworked, nor did anyone say they support abuse or retaliation either by the inmates or the correctional officers.

But now Smyk, who had planned to support a bill to reinstate capital punishment ever since the state Supreme Court ruling, says he thinks the uprising has given some state lawmakers who initially opposed the death penalty a new outlook.

“What I am hearing is that they’ve had a change of heart, so I think that this bill has a great chance in the House and the Senate,” he said.

Holdorf, however, was nearly speechless when asked about whether the elimination of the death penalty could have encouraged people to participate in the uprising.

“It sounds like nonsense. I really can’t, I don’t understand. It doesn’t make sense,” he said.

Delaware’s Chief Public Defender Brendan O’Neill, whose lawyers successfully argued against the death penalty at the Supreme Court, said that the Vaughn uprising does not change that capital punishment is expensive, error-prone and racially discriminatory.

“We’ll make the same arguments we’ve been making for a long time,” he said. “Despite supporter claims, there’s no evidence that the death penalty works.”

Left: After an uprising in a Delaware prison, lawmakers and human rights groups are casting blame in different directions. Photo via Getty Images