Baltimore officer who transported Freddie Gray will keep job, after police panel finds him not guilty

A police trial board in Baltimore found police officer Caesar Goodson Jr. not guilty of all 21 administrative charges he faced in the death of Freddie Gray, the 25-year-old black man who died while in police custody more than two years ago.

Goodson, 48, is the first of several Baltimore officers to face the police trial board over Gray’s death. The administrative trial, held at the University of Baltimore, began last week. The three-member board said Goodson had not violated police department protocol in the case.

Goodson, who was driving the van that transported Gray to the police station after his arrest, previously faced the most serious charges of six officers involved in Gray’s death, including second-degree “depraved-heart” murder.

Goodson looked stoic until the 21st "not guilty." A single conviction could have ended his career. Upon the 21st, he broke into a smile.

In opening arguments last week, city attorney Neil Duke said Goodson did not take actions on April 12, 2015, to make sure Gray was safe in the back of the van, including a failure to restrain Gray with a seat belt.

“After writing the words ‘DUTY,’ ‘RESPONSIBILITY’ and ‘INTEGRITY’ on a whiteboard during his opening remarks, Duke told the three-member panel hearing the case that Goodson had failed in all three regards,” The Baltimore Sun’s Kevin Rector wrote during the first day of the trial.

Duke also argued that the officer failed to alert a medic to help Gray and that he made false statements about the timeline of the arrest to investigators.

Goodson’s lawyers, on the other hand, laid blame on city and department leadership for failing to properly train officers and for not adequately communicating a change to department policy instituted days before Gray was arrested, which made seat belts for suspects mandatory.

“We believe in our heart of hearts, had they simply been told what the order was, they would have acted in accordance with that general order,” Sean Malone, Goodson’s attorney, said during the trial, according to WBAL-TV. 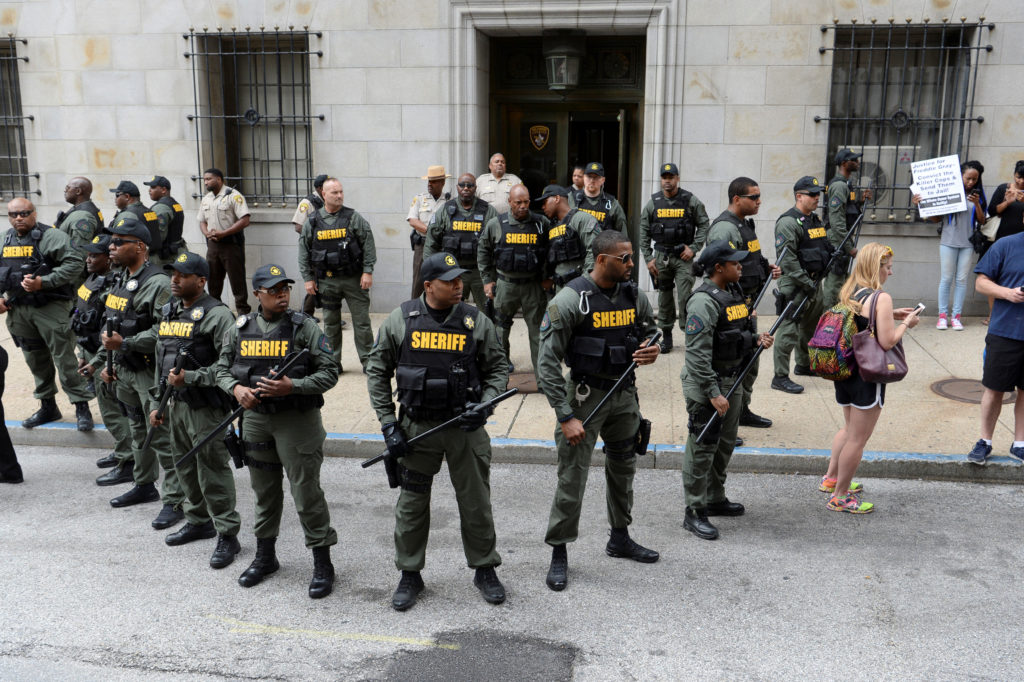 Sheriff deputies stand outside the courthouse in Baltimore, Maryland, in June 2016. Then, officer Caesar Goodson was found not guilty of all charges related to the death of Freddie Gray. Photo by Bryan Woolston/Reuters

“This is a vindication of this officer, and what was done that day is a tragic accident that happened. We are sorry for the loss of Mr. Gray. We are glad our client is not going to be the face of this incident,” Malone said.

Last year, Goodson was acquitted of murder during a state criminal trial over Gray’s death. After Goodson and two other Baltimore officers were cleared of all wrongdoing in Gray’s death, state prosecutors dropped criminal charges against the three remaining officers in the case.

During that trial, state prosecutors said Goodson gave Gray a “rough ride” and failed to properly secure him with a seat belt. Authorities later found Gray, who was handcuffed and shackled, unconscious after he suffered a spinal cord injury in the back of the police van. Gray died a week later.

In September, the Department of Justice said there wasn’t enough evidence to bring federal civil rights charges against the six officers.

A police union attorney told the Sun that two officers are fighting the administrative charges against them, while two others received “minor discipline.” The newspaper reported that Maryland law keeps the details of the punishment against the officers private. William Porter, the sixth officer, was not charged administratively.

The next administrative trial, for Lt. Brian Rice, is set to begin Nov. 13.

Left: Police observe a 2016 protest in Baltimore over the death of Freddie Gray while he was in police custody. Photo by Andrew Kelly/Reuters