The first U.S. fatality using self-driving technology took place in May when the driver of a Tesla S sports car operating the vehicle’s “Autopilot” automated driving system died after a collision with a truck in Florida, federal officials said Thursday.

The government is investigating the design and performance of Tesla’s system.

The company said this was the first known death in over 130 million miles of Autopilot operation.
Preliminary reports indicate the crash occurred when a tractor-trailer rig made a left turn in front of the Tesla at an intersection of a divided highway where there was no traffic light, the National Highway Traffic Safety Administration said. The Tesla driver died due to injuries sustained in the crash, which took place May 7 in Williston, Florida, the agency said. The city is southwest of Gainesville.

Tesla said on its website that neither the driver nor the Autopilot noticed the white side of the trailer, which was perpendicular to the Model S, against the brightly lit sky, and neither applied the brakes.

“The high ride height of the trailer combined with its positioning across the road and the extremely rare circumstances of the impact caused the Model S to pass under the trailer,” the company said. The windshield of the Model S collided with the bottom of the trailer. 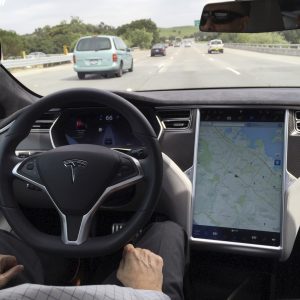 The company said this was the first known death in over 130 million miles of Autopilot operation. It said the NHTSA investigation is a preliminary inquiry to determine whether the system worked as expected.

Tesla says that before Autopilot can be used, drivers have to acknowledge that the system is an “assist feature” that requires a driver to keep both hands on the wheel at all times. Drivers are told they need to “maintain control and responsibility for your vehicle” while using the system, and they have to be prepared to take over at any time, the statement said.

Autopilot makes frequent checks, making sure the driver’s hands are on the wheel, and it gives visual and audible alerts if hands aren’t detected, and it gradually slows the car until a driver responds, the statement said.

Tesla conceded that the Autopilot feature is not perfect, but said in the statement that it’s getting better all the time. “When used in conjunction with driver oversight, the data is unequivocal that Autopilot reduces driver workload and results in a statistically significant improvement in safety,” the company said.

The Tesla driver was identified as Joshua D. Brown, 40, of Canton, Ohio. He was a former Navy SEAL who owned a technology company, according an obituary posted online by the Murrysville Star in Pennsylvania.

Tesla’s founder, Elon Musk, expressed “our condolences for the tragic loss” in a tweet late Thursday.

Our condolences for the tragic loss https://t.co/zI2100zEGL

NHTSA’s Office of Defects is handling the investigation. The opening of the preliminary evaluation shouldn’t be construed as a finding that the government believes the Model S is defective, NHTSA said in a statement.

The Tesla death comes as NHTSA is taking steps to ease the way onto the nation’s roads for self-driving cars, an anticipated sea-change in driving where Tesla has been on the leading edge. Self-driving cars have been expected to be a boon to safety because they’ll eliminate human errors. Human error is responsible for about 94 percent of crashes.