The number of earthquakes in Oklahoma have decreased since peaking last year, a development geologists have said this month may be linked to stricter regulations on wastewater created by the oil and gas industry.

The U.S. Geological Survey announced that the state has experienced 461 3-magnitude earthquakes or larger in 2016, down from 592 during the same period a year ago.

After historically averaging two 3-magnitude earthquakes or above each year, Oklahoma saw those numbers surge around 2013, soon after domestic production of oil and gas grew along with the price. That year, 109 earthquakes were recorded and by 2014 that number shot up to 585. “We’re slowing down, but nobody is breathing super easy yet.” — Todd Halihan, professor of geology at Oklahoma State University

By 2015, more than 900 earthquakes were documented on that scale, as growing consensus among scientists pointed to wastewater injection as the reason behind the uptick.

After companies extract the gas and oil from water found deep underground, they often inject the leftover wastewater back into the earth through disposal wells, which has been connected to the rapid increase in earthquakes.

The wastewater is routinely pumped deep within the earth and into the nooks and crannies of the vast Arbuckle formation, a 7,000-foot-deep sedimentary rock layer under Oklahoma. Fault lines rooted in place, sometimes for millions of years, lie below it.

“It looks like the majority of water, about 68 percent, was going into the Arbuckle zone,” Kyle Murray, a hydrogeologist with the Oklahoma Geological Survey, said.

The water fills into holes in the rock, increasing pore pressure, according to George Choy, a USGS seismologist. “So you have a fault that might have been locked for millions of years and would have stayed that way indefinitely,” Choy said. “[The wastewater] counteracts the pressure that’s holding these faults together.”

As the NewsHour Weekend reported in January, more than 1.5 billion barrels of wastewater were injected into disposal wells last year.

The phenomenon caused state regulators to take a hard look at the process of disposing of wastewater underground, headed by the Oklahoma Corporation Commission (OCC), which regulates oil and gas production in the state. The OCC began installing limits on a small number of disposal wells in 2013, before imposing stricter regulations in January this year.

Despite common misconception, the wastewater generated by hydraulic fracturing, known as fracking, “represents only a small percentage of the total volume of wastewater injected in disposal wells in Oklahoma,” according to the Oklahoma Geological Survey.

Todd Halihan, a professor of geology at Oklahoma State University, said the vast amount of water reduced friction between faults, releasing energy and causing the the earth to shudder.

“We’re slowing down, but nobody is breathing super easy yet,” he said. 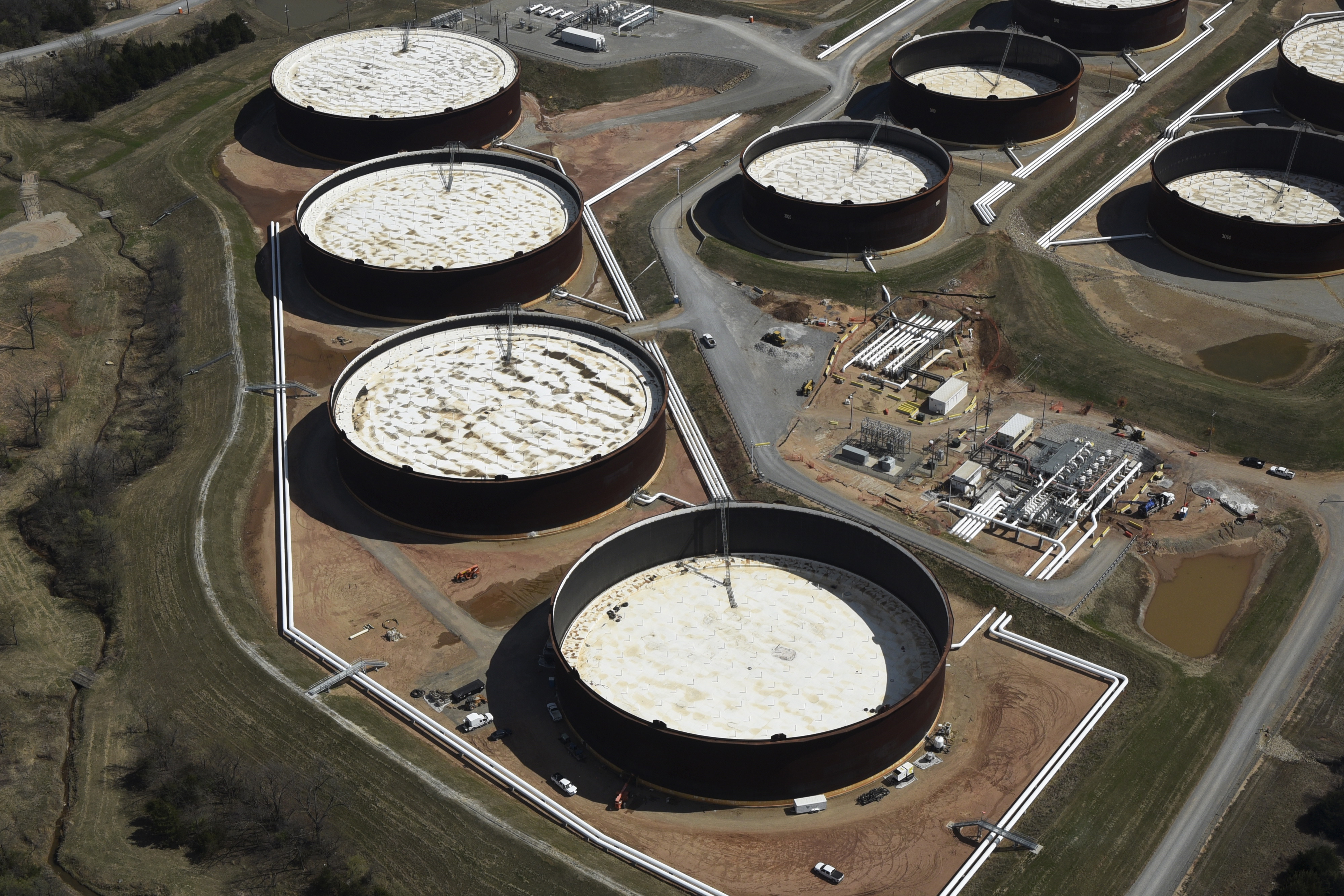 Crude oil storage tanks are seen from above at the Cushing oil hub, appearing to run out of space to contain a historic supply glut that has hammered prices, in Cushing, Oklahoma, March 24, 2016. Photo by Nick Oxford/Reuters

Have new regulations made a difference?

During the last two years, the USGS and others released findings that the process of injecting wastewater at such high volumes were linked to the dramatic increase in earthquakes.

In 2015, the Oklahoma Geological Survey found that most of the earthquakes documented during the last several years “are very likely triggered by the injection of produced water in disposable wells.”

Stricter regulations overseen by the OCC soon followed. Since late January, the OCC said it has targeted areas in central Oklahoma with high rates of seismic activity, shuttering or limiting the amount of wastewater pushed into the Earth at more than 600 injection wells in the central portion of the state. Oklahoma has approximately 3,600 injections wells overall.

Matt Skinner, a spokesman for the OCC, said so far those targeted areas have reduced wastewater injections by roughly 40 percent. Skinner said the state had previously placed restrictions on a smaller number of wells.

“One of the strategies that the corporation commission has is to try and reduce volumes back to where they were in 2012 when we had a pretty moderate seismicity in Oklahoma,” Murray said.

In a statement issued in March, Chad Warmington, president of Oklahoma Oil & Gas Association, a group composed of industry representatives, said while “Oklahoma researchers and regulators have already determined that there are specific areas of increased seismic activity in parts of the state that need to be addressed,” the OCC should expect the results of the new regulations on wastewater to take up to two years.

“It’s important to keep in mind that the state has been repeatedly advised by independent experts that the actions taken by the OCC should not be expected to have instant results,” he said.

While some are attributing the drop to new regulations overseen by the OCC, others posit the decrease in oil and gas production caused by lower prices may also have been a factor.

“It seems to be a combination of both,” he said. “The jury is still out as far as what exactly contributes to the decrease.”

Choy, of the USGS, told the NewsHour that there are case histories in Texas, Colorado, Arkansas, Ohio, Kansas and New Mexico where various restrictions on oil and gas production have affected the number of earthquakes taking place.

‘There’s a correlation,” he said. “If you increase injection it’s followed by an increase or decrease in seismicity.”