Editor’s Note: The last remaining American with Ebola may have just been released from the hospital, but spread of the disease hasn’t abated everywhere. As reported on the NewsHour this week, cases have increased this month in Sierra Leone, while Mali has reported a second larger outbreak. “As long as the disease is spreading in West Africa, it’s likely we’re going to see more cases in the U.S.,” CDC spokesman Tom Skinner said this week. 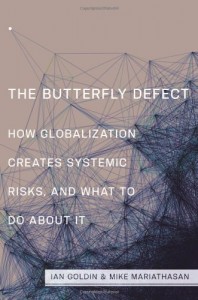 This year’s Ebola outbreak illustrates what former World Bank vice president Ian Goldin calls “The Butterfly Defect.” His new book of the same title, co-authored with University of Vienna assistant professor of finance Mike Mariathasan, explores the systematic risks that come with globalization, like the international spread of contagious diseases.

The outbreak in West Africa has caused paranoia and infection far away in the United States and Spain. In short, local risks now have international repercussions. And it’s not just contagious diseases that transcend geographic and disciplinary borders, but climate change and financial crises, too.

The problem, according to Goldin in the following column on Making Sen$e, is that globalization’s systemic risks are not being managed, in large part because the intergovernmental and international institutions that would do the managing aren’t getting enough support from nations already wary of their existence.

Goldin knows of what he speaks. Before his tenure at the World Bank, he worked for the Development Bank of South Africa, the European Bank for Reconstruction and Development and the Organization for Economic Cooperation and Development, and he has also served as an adviser to former South African president Nelson Mandela. He’s now the director of Oxford’s Martin School. His other books include “Divided Nations: Why Global Governance Is Failing and What We Can Do About It.”

Globalization has delivered immense health benefits, enabling more people than ever to live longer, healthier lives. But globalization is also leading to a number of escalating threats to health. Ebola is just the latest example.

Ironically, though, in an era when we’re all more connected internationally, national support for international organizations, like the World Health Organization, has waned, limiting our ability to mitigate the systemic risks and spill-over effects of globalization.

The spread of disease and its potential economic impacts are just a few of the effects of globalization. And even though non-communicable diseases, like diabetes, now take the greatest toll on life and strain already stretched health budgets, infectious diseases and pandemics continue to pose the greatest threat to humans in a globalized world.

Is Globalization Wiping Out the American Surfboard Industry?

Yes, we’ve come a long way in containing the spread of disease. But the recent successes in containing Severe Acute Respiratory Syndrome (SARS), H1N1 (“swine flu”) and H5N1 (“bird flu”), and the fact that we have not seen a globally devastating pandemic in recent decades, are not excuses for complacency.

Already this outbreak of Ebola has killed more people than all previous episodes of Ebola. Infection rates exceed 13,000 total cases as of the latest World Health Organization update on Nov. 7. In September, with the number of cases doubling every 20 days, the Centers for Disease Control and Prevention (CDC) estimated that without additional interventions or changes in community behavior by Jan. 20, there could be up to 1.4 million cases of Ebola in Liberia and Sierra Leone alone.

Peter Piot, the director of the London School of Hygiene and Tropical Medicine, who co-discovered the Ebola virus in 1976, has emphasized that the threat requires a far greater all-out effort to prevent Ebola from becoming endemic in West Africa, which would create a reservoir for its spread to other parts of Africa and beyond.

Since no reliable vaccine exists, and because Ebola has an incubation period of over two days, individuals can escape detection and isolation before the symptoms are identified and they are contagious. Nigeria and Senegal have demonstrated that the combination of effective intervention by local health officials, adequate resources and support from the local community, can contain Ebola. That the worst outbreaks and least effective responses to the crisis have been in the West African countries ravaged by decades of civil war and with the most under-resourced health systems is no coincidence.

Like Any Positive Force, Globalization Has an Equal and Opposite Force

When it comes to health, the higher levels of connectivity and integration between societies highlight the fact that globalization does not only lead to the spreading of “goods,” such as economic opportunity and vaccines, but also to the spreading of “bads,” such as diseases, financial crises and cyber attacks. Short-sighted policy making in business, as well as in politics, is an unintended consequence of globalization that has made the management of these “bads” more difficult.

Globalization and its related health risks have put resources in greater demand, and yet budgetary and accounting pressures are making them even scarcer. National health systems have had to reduce their stockpiles of resources, while international agencies and pharmaceutical companies have reduced investments in research and development on infectious diseases and antimicrobial resistance.

With private research concentrated in the hands of fewer companies, whose business models rely on a handful of blockbuster patented drugs, the development of antibiotics as well as vaccines for infectious diseases, especially those that afflict poor people in developing countries, is lagging further and further behind the needs of our societies. This widening gap is not being closed by the public sector at either the national or international level.

“Even before the Ebola crisis, national governments kept the WHO and other global institutions on financial drip-feed. Hand-to-mouth budgets don’t allow these organizations to prevent, let alone respond to, crises.”

In the age of austerity, the WHO and its regional and national counterparts, which are critical to the control of pandemics, are being starved of funds. A breakdown or absence of public health infrastructure is the driving factor in over 40 percent of infectious disease outbreaks internationally (see page 30 of hyperlinked report).

Even more important than dealing with the immediate threat is ensuring that this Ebola outbreak encourages greater levels of preparedness against the future spread of infectious diseases, of which the threat is growing rapidly with rising population density and international travel.

Systemic risks propagate along the arteries of globalization. As our economies become more interconnected, we also become more vulnerable to disruption. Ebola is an example of how that disruption can go global, and how the economic impact compounds the immediate health consequences.

Up to a quarter of the government budgets in these countries now needs to be spent on health (compared to around 8 percent previously). And just when expenditures need to be ramped up, tax and other revenues are declining sharply due to the Ebola-induced economic shock. Production and transportation of crops have collapsed as workers are told to stay home and vital routes are closed. Food prices are spiking and are already 150 percent higher than before Ebola struck. Malnutrition is rising and incomes are collapsing in both rural and urban areas. For a region that is trying to shake off the legacy of a series of terrible civil wars, the shock of Ebola is a particularly devastating set back.

The United States and other advanced economies, like Spain, where Ebola has now been transmitted, are unlikely to suffer the same widespread outbreaks. But because of globalization, infectious diseases pose a real economic threat to developed economies.

There is a significant probability that a pandemic could strike major financial centers, such as London and New York, which, due to the 40-plus daily flights between them, are among the most connected metropolises in the world. The spread of disease, followed by panic, quarantine, the collapse of secondary services (transport, energy, food, information technology) and other unanticipated consequences could lead to a sharp collapse, followed by the seizing of financial markets, with subsequent cascading and amplifying effects for production, consumption and services across all economies.

How cocoa traders make money on the Ebola scare

Regulation in the wake of the 2008 financial collapse has been oriented toward preventing the financial system from repeating past mistakes. But we can’t just look backward. We need to understand that, in a globalized world, systemic risks won’t be constrained to one area, like health; they can jump across our disciplinary and organizational boundaries and easily cascade into another area, such as finance.

Over the past 25 years, the opening of global markets and the physical and virtual integration of the global economy have coincided with the most rapid rise in incomes and population in history. The financial crisis was just the first demonstration of the new forms of risk that have been unleashed by technologically enhanced globalization.

The Importance of Global Cooperation

Yes, globalization expands opportunity, but it also exacerbates risks, and as those opportunities and risks are increasingly distributed in an unequal way, divisions within societies widen. People and societies that fail to get on the turbo-charged globalization train are left further and further behind. That’s a spill-over effect of globalization that, unless managed, threatens to overwhelm our political institutions and national economies.

It’s not just inequality that poses a systemic risk to the economy. As individuals and societies get richer, they become closer, both physically, through population growth, urbanization and travel, and virtually, through the Internet. Simultaneously, as the consumption of food, energy and medicines rises, the externalities, or spill-over effects, of individual choices grow. The integration and connectivity of global systems widen the range and amplify the impact of antibiotic resistance, climate change, pandemics and financial crises. These issues, which may compound each other, transcend national and organizational borders. A pandemic, flood or cyber-attack could provoke a global financial crisis or a political crisis. The vectors of our connectivity – such as cyberspace, financial markets, airport hubs or logistics centers – have become the source of “super-spreading” of both the positives and the negatives of globalization.

The other Ebola scare: the rising cost of chocolate

Growing interdependencies require more coordination than previously was the case, within countries and between them. Yet, politics is pushing in the opposite direction and becoming more fractious. Countries are becoming less cohesive as a result of rising inequality, making it difficult to make tough decisions, especially in some of the democracies that are turning their backs on regional and global institutions. In the United Kingdom, for example, there’s been a rapid growth in support for the UK Independence Party (UKIP), which favors withdrawing from the European Union and supports much tighter immigration controls. Increased support for the National Front in France and similar parties across Europe, as well as the political gridlock in the U.S., poses similar challenges.

Even before the Ebola crisis, national governments kept the WHO and other global institutions on financial drip-feed. Hand-to-mouth budgets don’t allow these organizations to prevent, let alone respond to, crises. And because national governments have stymied vital reforms of the WHO, International Monetary Fund, World Bank and UN Security Council, these institutions increasingly lack the leadership, legitimacy or capability to manage the spill-overs of globalization or emergent threats.

National governments attempting to wrest power back from what they think are mysterious, distant institutions will only compound the problem. If we don’t address globalization’s risks, expect to see the spread of more threats like Ebola. In order to harvest the “goods” of globalization we need to invest in the institutions that manage the “bads.”