DAYTON, Ohio — A man who died in the arms of his son in a mass shooting in Ohio was remembered Saturday as a loving family man who painted houses and loved to fish and cook.

The funeral for Derrick Fudge, 57, was among several being held Saturday for people who died in mass shootings last weekend in Dayton, Ohio and El Paso, Texas. Investigators say a shooter opened fire in a Walmart store on Aug. 3, targeting Mexicans and killing 22 people. Less than 24 hours later, another gunman killed nine people in a popular Dayton nightlife area. 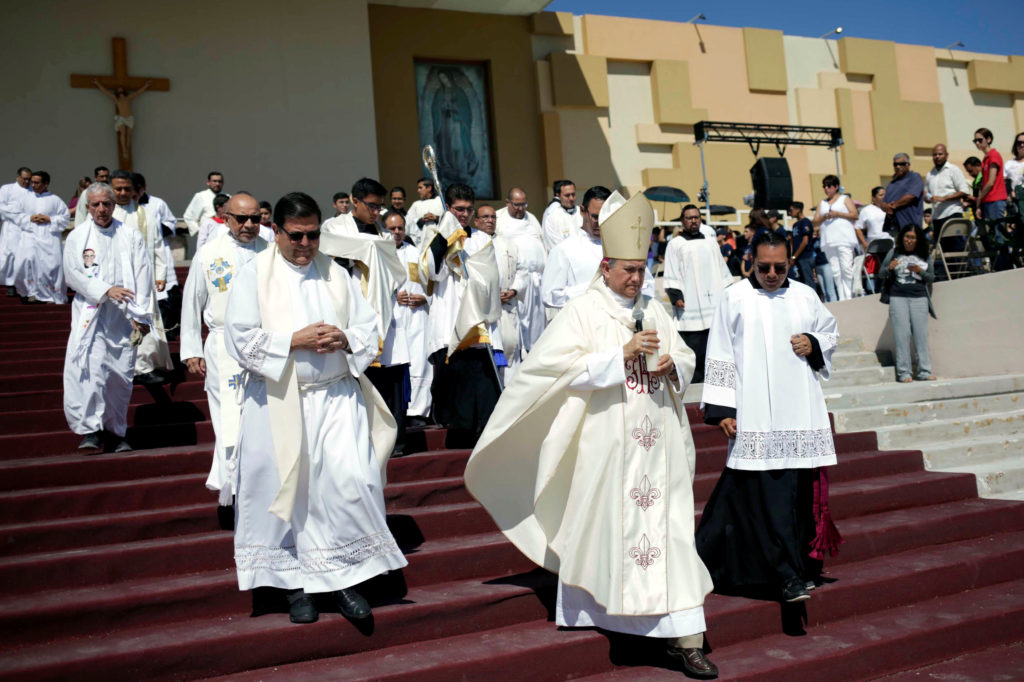 Jose Guadalupe Torres, Bishop of Ciudad Juarez, heads a “Mass for the Peace” a week after a mass shooting at a Walmart store in El Paso, Texas, U.S., at the border between Mexico and the U.S. in Ciudad Juarez, Mexico, August 10, 2019. Photo by Jose Luis Gonzalez/Reuters

Fudge’s son, Dion Green, said his father spoke often of his willingness to die for him. Green previously told the Springfield News-Sun he believes his father protected him from being killed. Green told mourners his father was a great person who was always there to help when needed.

Burial services for 38-year-old Saeed Saleh were also held Saturday morning in Dayton, according to the Daily News. Saleh, who was originally from Eritrea and recently immigrated to the U.S., was remembered as a “humble and quiet person” by a spokesman for the family.

In El Paso, a requiem Mass was offered for 15-year-old Javier Amir Rodriguez, a high school sophomore and avid soccer player who was at the Walmart with his uncle when he was killed.

Burial was also scheduled for Jordan Anchondo, who died shielding her infant son from gunfire. Her 2-month-old son was treated for broken bones, but was orphaned after Jordan and her husband, Andre, were killed.

Left: A picture of Derrick Fudge, 57, is prepared outside of St. John Missionary Baptist Church before his visitation and funeral service on August 10, 2019 in Springfield, Ohio. Fudge was one of nine people killed when 24-year-old Connor Betts opened fire with a AR-15 style rifle in the Oregon District in nearby Dayton. Fudge was out in the popular entertainment district with his only son, Dion green, when he was shot. He died in his son's arms. Photo by Scott Olson/Getty Images