Federal officials lost track of nearly 1,500 migrant children last year after a government agency placed the minors in the homes of adult sponsors in communities across the country, according to testimony before a Senate subcommittee Thursday.

The Health and Human Services Department has a limited budget to track the welfare of vulnerable unaccompanied minors, and realized that 1,475 children could not be found after making follow-up calls to check on their safety, an agency official said.

Federal officials came under fire two years ago after rolling back child protection policies meant for minors fleeing violence in Central America. In a follow-up hearing on Thursday, senators said that the agencies had failed to take full responsibility for their care and had delayed crucial reforms needed to keep them from falling into the hands of human traffickers.

“You are the worst foster parents in the world. You don’t even know where they are,” said Democratic Sen. Heidi Heitkamp of North Dakota. “We are failing. I don’t think there is any doubt about it. And when we fail kids that makes me angry.”

“These kids, regardless of their immigration status, deserve to be treated properly, not abused or trafficked” – Sen. Rob Portman

Since the dramatic surge of border crossings in 2013, the federal government has placed more than 180,000 unaccompanied minors with parents or other adult sponsors who are expected to care for the children and help them attend school while they seek legal status in immigration court.

An AP investigation found in 2016 that more than two dozen unaccompanied children had been sent to homes where they were sexually assaulted, starved or forced to work for little or no pay. At the time, many adult sponsors didn’t undergo thorough background checks, government officials rarely visited homes and in some cases had no idea that sponsors had taken in several unrelated children, a possible sign of human trafficking.

Since then, the Health and Human Services Department has boosted outreach to at-risk children deemed to need extra protection, and last year offered post-placement services to about one-third of unaccompanied minors, according to the Senate Permanent Subcommittee on Investigations.

But advocates say it is hard to know how many minors may be in dangerous conditions, in part because some disappear before social workers can follow up with them and never show up in court. 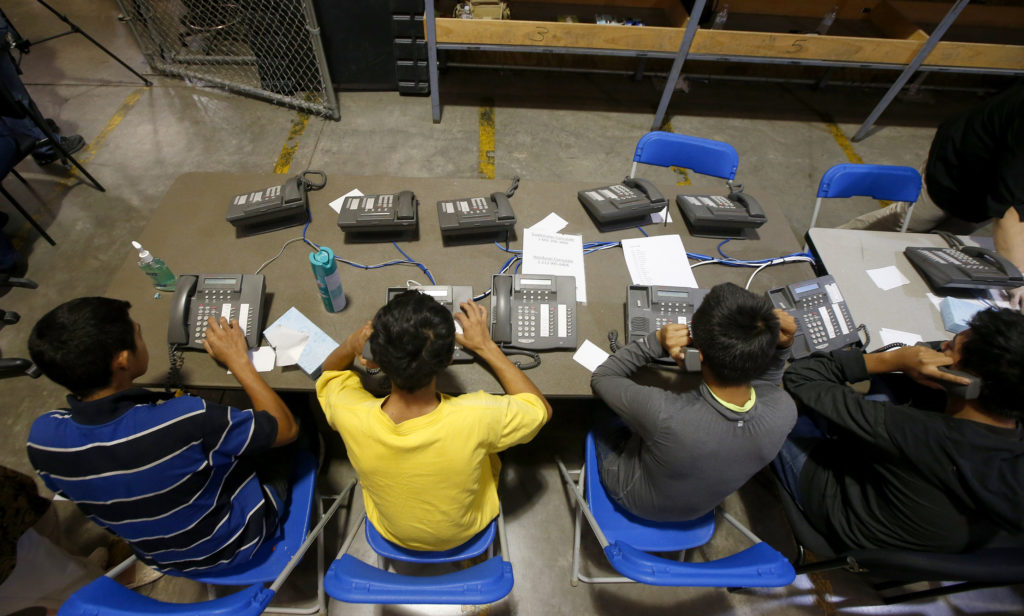 From October to December 2017, HHS called 7,635 children the agency had placed with sponsors, and found 6,075 of the cPhildren were still living with their sponsors, 28 had run away, five had been deported and 52 were living with someone else. The rest were missing, said Steven Wagner, acting assistant secretary at HHS.

Republican Sen. Rob Portman gave HHS and the Department of Homeland Security until Monday to deliver a time frame for improving monitoring.

“These kids, regardless of their immigration status, deserve to be treated properly, not abused or trafficked,” said Portman, who chairs the subcommittee. “This is all about accountability.”

Portman began investigating after a case in his home state of Ohio, where eight Guatemalan teens were placed with human traffickers and forced to work on egg farms under threats of death. Six people have been convicted and sentenced to federal prison for their participation in the trafficking scheme that began in 2013.

The hearing comes as the Trump administration has called for amending a law to allow the government to send more migrant children back to their home countries more quickly if they are not at risk of trafficking. The administration also is pushing to terminate the settlement of a class-action lawsuit that ensures unaccompanied minors are housed in the “least restrictive” setting, preferably with their parents or other adult relatives, while they await hearings in immigration court.

Last year, the administration announced it would begin arresting sponsors who had hired smugglers to bring their children into the U.S., a move that sent a shudder through immigrant communities nationwide.

HHS is re-examining its interpretation of existing laws to explore whether the agency is legally responsible for children after they have been released from its placement program, said Steven Wagner, an acting assistant secretary at the U.S. Department of Health and Human Services.

Homeland Security has coordinated the care, custody and removal of unaccompanied minors with its counterparts at HHS, according to an agency official’s testimony.

“DHS has worked closely with the Trump administration and members of Congress to address existing ‘loopholes’ that allow individuals to exploit our immigration laws,” said James McCament, a DHS deputy undersecretary.

Once migrant children turn 18, they are no longer eligible to be held in facilities run by HHS, and the agency is required to let DHS know whether the children should be detained or released into the community. But HHS only forwards those plans for one of every three children, the subcommittee found.

The number of children seeking refuge in the U.S. has not returned to the height of the surge starting in 2013, but spiraling gang and drug violence in Honduras, Guatemala and El Salvador continue to push children, teens and families to migrate northward.

The panel’s top Democrat, Sen. Tom Carper of Delaware, said the agencies need to do more to prevent abuse.

“Given all that we learned in 2015 and 2016, it’s unacceptable that we can still be this bad at keeping track of these children,” Carper said.