More than 300,000 children have been documented traveling unaccompanied around the world in recent years, leaving them highly vulnerable to exploitation, according to a report released last week by UNICEF.

In 2015 and 2016, 100,000 children were found along the U.S.-Mexico border and 200,000 others were found without an adult in other countries, a number that represents a five-fold increase from 66,000 in 2010 and 2011. Aid organizations say that hundreds of thousands of minors are also likely traveling alone but are not counted in the report.

“This is just the tip of the iceberg,” said UNICEF Deputy Executive Director Justin Forsyth. “This is only a small part of a bigger picture. The second part of this is what is happening to children who are increasingly falling into the hands of traffickers and smugglers.”

Forsyth described a bleak scenario for the children migrating alone to Europe or the U.S., leaving them at the mercy of traffickers and smugglers along the route. The unaccompanied minors are predominantly fleeing poverty and war in Africa and destitution and gang violence in Central America.

Children from Nigeria, Eritrea and Somalia represent many of the minors taking the journey from Africa, while in Central America, most come from Guatemala, Honduras and El Salvador, Forsyth said. More than 60 percent of children who traveled from these regions were found to be trafficking victims.

He said that rape, enslavement and forced labor are particularly widespread along routes in Africa, where many migrant children move through Libya on their way to Italy and Greece and attempt to cross a perilous Mediterranean Sea route that killed more than 4,500 people and 700 children in 2016. Others leave Afghanistan and cross through Iran and Turkey to Europe, Forsyth said. 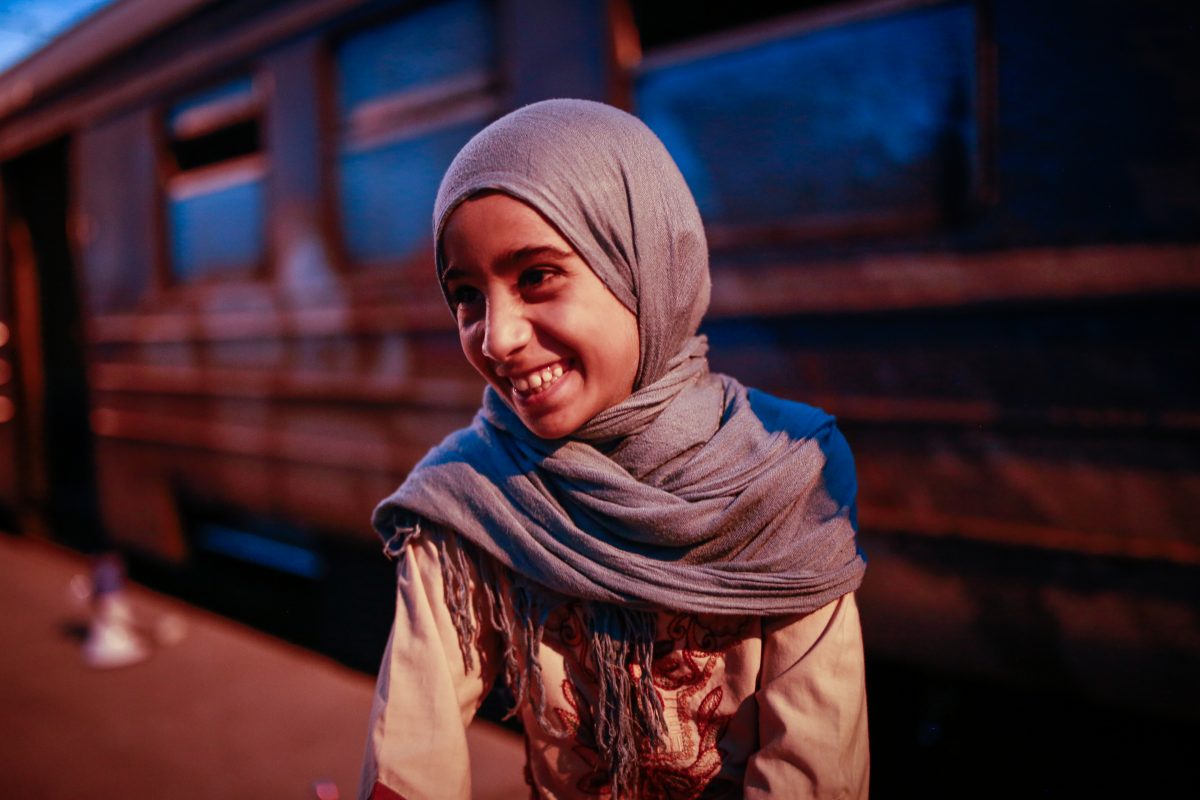 An Afghan girl gets off a train in October 2015 in the former Yugoslav Republic of Macedonia. She planned to walk from the train station in Tabanovce, with hundreds of other migrants and refugees, across the border and into Serbia. Photo courtesy of UNICEF

In 2015 and 2016, children applied for asylum in about 80 countries, and in Italy, 92 percent of all children who arrived by sea in 2016 were unaccompanied. Forsyth said a staggering number of them have told stories of abuse and that all of the young women he’s met, and many of the young men, have survived sexual assault.

One survey by the International Organization for Migration found that roughly three-quarters of children between the ages of 14 and 17 who were polled after arriving in Italy suggested they may have been “trafficked or otherwise exploited.”

“A big group of these children are teenagers, but they go as young as 8, 9,” Forsyth said.

READ NEXT: Photos: What migrants leave behind on their journeys through the desert

While the report says abuse is less common along migrant routes in Mexico and Central America, which have seen a heavy uptick in recent years, U.S. immigration policies sometimes require children to return to countries where they will face the same dangers they were attempting to flee. Those that are found by U.S. authorities are required to attend an immigration hearing to decide their status.

“One of our main concerns with the Central American challenge is children who are sent back where they are abused again,” Forsyth said. “Whether [children] have a representative or lawyer present will determine whether they get the right to stay or not. So many children are sent back after those hearings and we know they are sent back to particularly dangerous environments.” 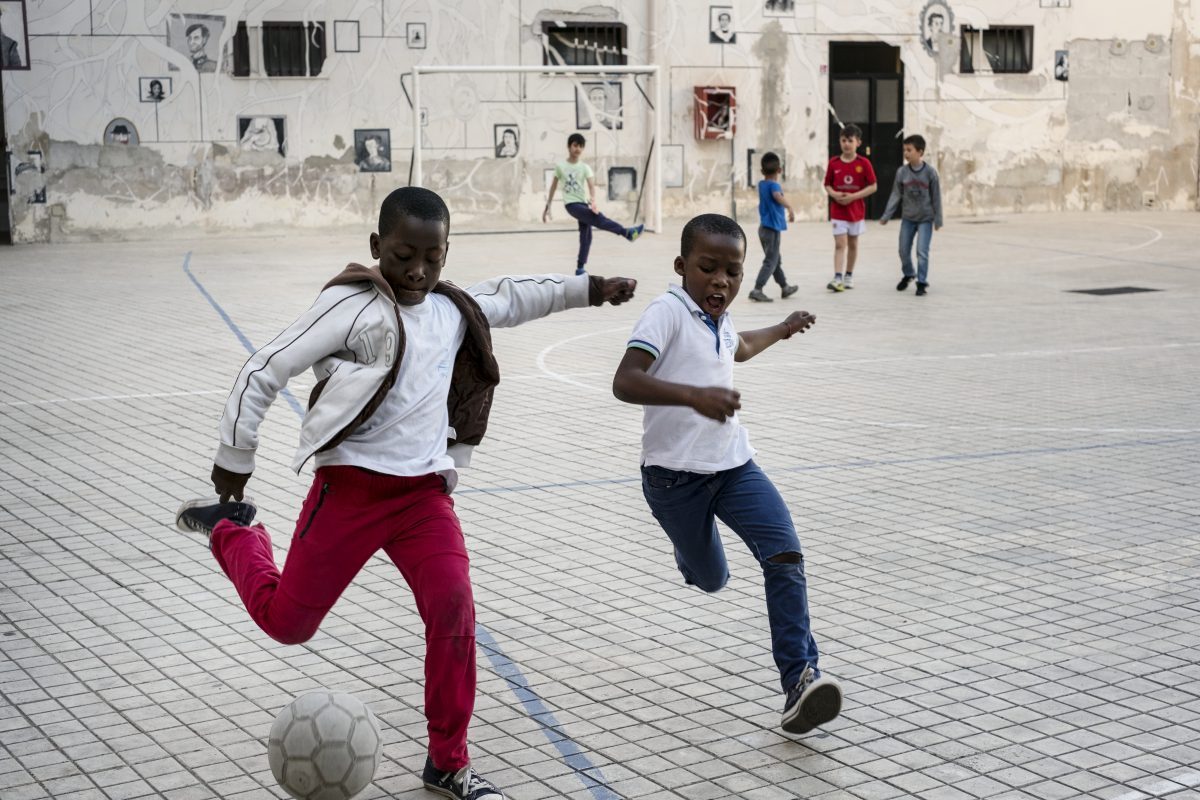 Migrants and Italians play in the Oratorio Santa Chiara, a community space devoted to local residents by the churches father, Padre Enzo, in the Ballaro district of Palermo, Sicily, Italy, on April 26, 2017. Photo courtesy of UNICEF.

According the Migration Policy Institute, the number of unaccompanied minors heading to the U.S. from Mexico increased 90 percent between 2013 and 2014.

“The parents go by themselves, they leave their children behind and once their parents have entered the U.S. and establish themselves and have a place to live and they have some kind of income, then they will send for their children or tell their children to come and meet them,” said Faye Hipsman, a policy analyst with the Institute’s U.S. immigration policy program.

She told the NewsHour Weekend that many children are released to a family member or guardian in the U.S. as they proceed through the immigration court process, which can take years to complete because of backlogs. Hipsman said the smugglers have also caught on to the demand for passage to the U.S., charging an estimated $5,000 to $10,000 for the trip.

“The smuggling industry has shown a real ability to kind of drum up business and create new business models,” she said. “That’s one of the reasons behind the surge, is that smugglers have made it an available and easy trip to take.”

The report also noted that many of the state actors charged with overseeing the children who have fled their countries often leave the young migrants and refugees in crowded shelters, makeshift camps or they “are left exposed to the dangers of life on the street.” A mistrust of authorities or fear of detention and deportation prevents children from seeking help, the report said.

“We have seen a varying degree about how different states take care of minors,” said Amy Richmond, a child protection advisor for Save the Children, a non-governmental group that works closely with UNICEF on the issue of unaccompanied minors.

Richmond said that members of her organization are stationed in countries where many of the unaccompanied children cross through and set up “reception centers” to inform both children and families “what are their rights, where can they access services, and ways to protect themselves along their journeys.

Forsythe said UNICEF intentionally released the report before the G-7 countries meet next month in order to highlight the issue and to push for a six-point plan they say could reverse the rise in unaccompanied children.

“How far they’ll get in the G-7 to agreeing to it, we don’t know,” he said. “There is a quite a lot of disagreement between G-7 countries on migration and refugees in general. But in a way our message is: even is you disagree more generally you can do something for the most vulnerable children.”

Left: Three children look out of the window of a train in Macedonia, as refugees primarily from the Syrian Arab Republic, Afghanistan and Iraq board the train at a reception center for refugees and migrants, in Gevgelija in October 2015. From here, refugees boarded a special train that took them to Tabanovce, close to the border with Serbia. Photo courtesy of UNICEF