NEW YORK — At another time in history, the indictment of two jail guards responsible for monitoring Jeffrey Epstein the night he killed himself might have served as an emphatic rebuttal to suspicions that the wealthy sex offender was actually murdered.

Conspiracy theories continued to flourish, even after prosecutors took pains to point out the ample evidence backing a medical examiner’s determination that Epstein hanged himself.

Video surveillance confirmed, they said in a news release and an indictment, that nobody had entered the area where Epstein was locked in his cell.

The locked door to the unit, they said, could only be opened remotely by an officer in the jail’s control center, plus there was a second locked door to which only correctional officers assigned to the high-security housing unit had the key. Epstein had no roommate, they said, and had died alone.

No matter. Social media buzzed with “Epstein didn’t kill himself” memes, fueled by the financier’s past associations with Britain’s Prince Andrew and U.S. presidents Bill Clinton and Donald Trump.

“Epstein is alive on a beach somewhere in the middle east,” said another.

Democrats and Republicans — and even Epstein’s family and his alleged victims — were united in skepticism that Epstein could have taken his own life a month after his arrest on sex trafficking charges.

At a news conference Thursday, lawyer Gloria Allred, who represents several women who say they were sexually abused by Epstein, said there remains quite a few “suspicious circumstances surrounding his death.” Dr. Michael Baden, the forensic pathologist hired by Epstein’s family to observe his autopsy, also remains incredulous, saying he wanted to hear from the guards before deciding whether it was suicide or homicide. 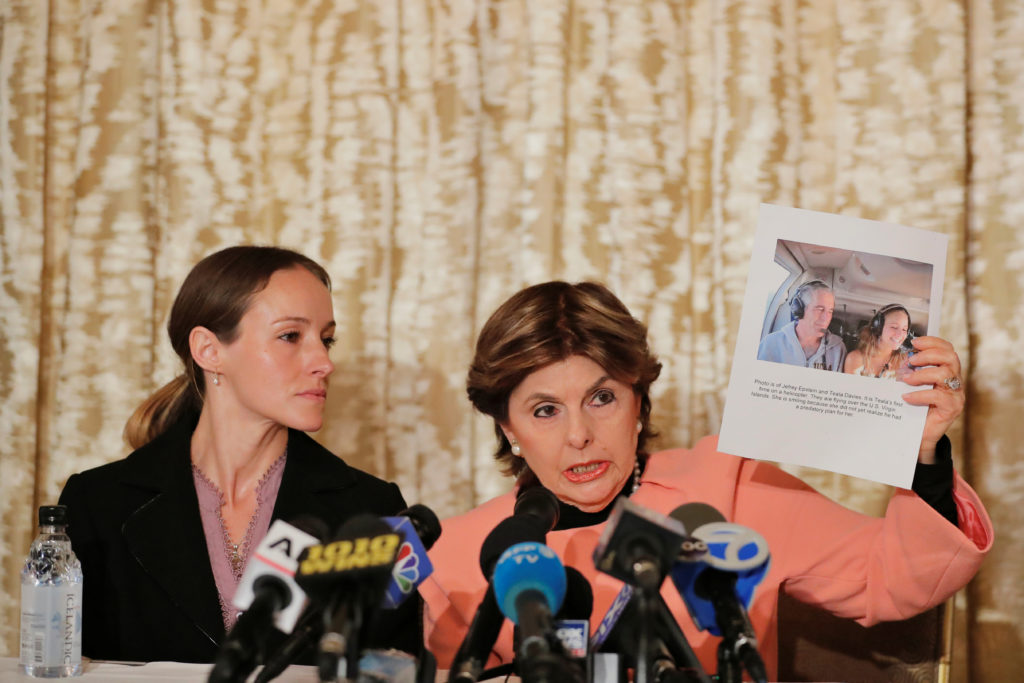 Attorney Gloria Allred holds aloft a photograph of her client, Teala Davies, and Jeffrey Epstein as she speaks in regards to a lawsuit alleging that Davies was assaulted by Jeffrey Epstein for two years during a press conference in New York City, U.S., November 21, 2019. Photo by Lucas Jackson/Reuters.

Eric Oliver, a University of Chicago professor who studies conspiracy theories, said no amount of evidence presented by government authorities is likely to change some people’s minds.

“When there’s already this kind of profound mistrust of the political system, of political institutions, of the media, any kind of official channel that seeks to overturn this belief is likely to be viewed with suspicion,” he said.

Oliver said a survey he conducted two weeks ago found that 30% of respondents believed Epstein’s death was a homicide. Most conspiracy theories gain traction with less than 20% of respondents, he said. The Trump-perpetuated theory that President Barack Obama was not born in the U.S. peaked at about 24%.

The Epstein conspiracy theories also cut across the ideological spectrum, Oliver said, in part because they speak to concerns some Americans have about concentrations of wealth and power: feeling that the wealthy have amassed too much political power.

“The idea that somehow or another they were able to sneak into his jail cell and murder him speaks to both that power — that they’re somehow or another above the law — and the nefariousness of their intentions, that they’d be willing to murder some guy who could potentially expose the wealthy,” Oliver said.

The two corrections officers at the Metropolitan Correctional Center charged in connection with Epstein’s Aug. 10 death are accused of the relatively mundane crime of falsifying prison logs.

Guards Tova Noel and Michael Thomas were supposed to be checking on Epstein every half-hour. But prosecutors said they shirked that duty and were instead sleeping or surfing the internet for bargains on furniture and motorcycles, and Epstein “committed suicide overnight while unobserved.” The guards have pleaded not guilty and are free on bail.

Attorney General William Barr told The Associated Press this week that he initially had his own suspicions about Epstein’s death but came to the conclusion that failures by the jail’s staff had allowed Epstein to take his own life. 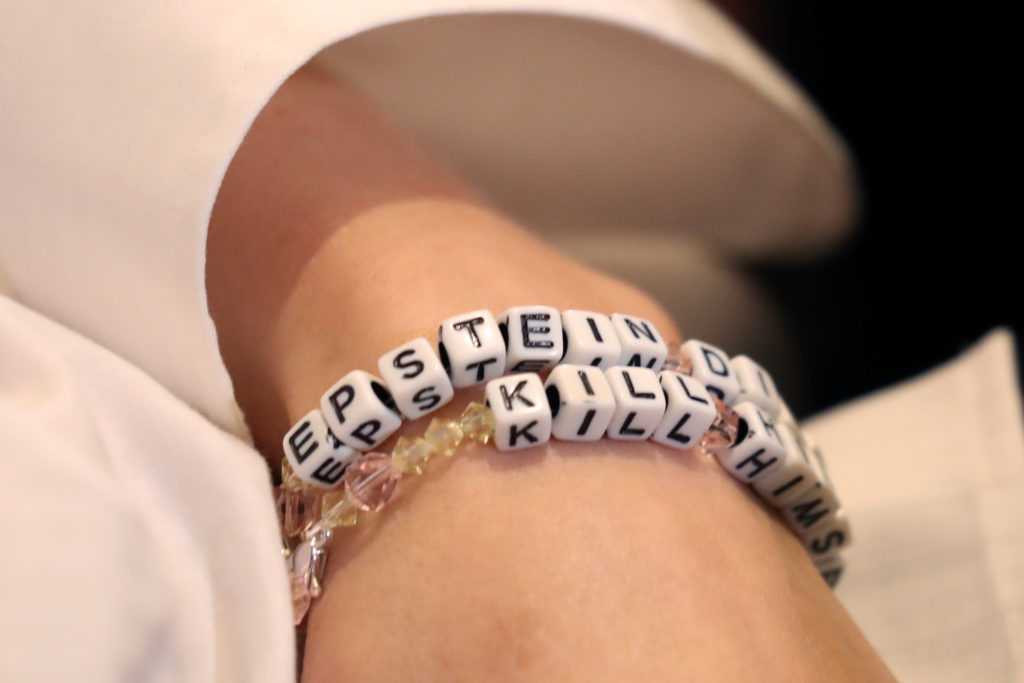 “Jane Doe 15,” a 31-year-old unidentified woman, who accuses the late financier Jeffrey Epstein of sexually abusing her when she was a child, wears a bracelet that reads “Epstein didn’t kill himself” as she speaks at a news conference in Los Angeles, California, November 18, 2019. Photo by Lucy Nicholson/Reuters.

“I can understand people who immediately, whose minds went to sort of the worst-case scenario because it was a perfect storm of screw-ups,” Barr said.

The phrase “Epstein didn’t kill himself” has taken on a life of its own — sometimes more as a pop culture catchphrase than an actual belief.

It has shown up on a screen at San Diego’s airport, on a California brewery’s beer cans and as the name of a new Michigan brew.

This month, a former Navy SEAL appearing on Fox News blurted, “Epstein didn’t kill himself,” during an unrelated interview.

Last week, a man tried to register for a spot on the New Hampshire primary ballot as Rod “Epstein Didn’t Kill Himself” Webber.

On Monday, the day before the officers were charged, a woman who says Epstein sexually assaulted her when she was 15 wore a bracelet to a news conference that spelled out: “Epstein didn’t kill himself.”

Even members of Congress got in on the act.

U.S. Rep. Paul Gosar, R-Ariz., spelled out the phrase with the first letter of each in a series of 23 tweets last week. At a prison oversight hearing on Tuesday, U.S. Sen. John Kennedy said drywall, Christmas ornaments and Epstein were “three things that don’t hang themselves.”

“That’s what the American people think, and they deserve some answers,” the Louisiana Republican said.

Kathleen Hawk Sawyer, the new director of the Federal Bureau of Prisons, said during that oversight hearing that Epstein’s death was “a black eye on the entire Bureau of Prisons.” But in an exchange with South Carolina Republican Sen. Lindsey Graham, she reiterated that it was a suicide.

“Do you have any evidence to suggest otherwise?” Graham asked.