Flooding in Midwest could be historic, National Weather Service says

The National Weather Service is warning that flooding in parts of South Dakota and northern Iowa could soon reach historic levels.

Weather Service hydrologist Kevin Low said during a telephone briefing Wednesday that “major and perhaps historic” flooding is possible later this month at some spots on the Big Sioux and James rivers.

The Big Sioux River in South Dakota and Iowa is expected to reach near-record levels in some places.

The worst of the flooding, caused by snowmelt and heavy rain, has so far been in Nebraska, southwestern Iowa and northwestern Missouri. Hundreds of residents have been displaced and well over 100 miles (160 kilometers) of levees in the three states have been breached or overtopped.

Residents are evacuating a tiny northwestern Missouri town because the Missouri River is approaching near-record levels.

Authorities said Wednesday that most of the roughly 130 people who live in Lewis and Clark Village have already left for higher ground.

Other nearby towns are at risk, too. A levee breach Tuesday unleashed a torrent that overwhelmed a temporary berm guarding the 220-resident town of Craig, which is under a mandatory evacuation.

Water also was lapping at the edge of the tiny community of Fortescue and another levee was at risk of breaching and potentially flooding Forest City. 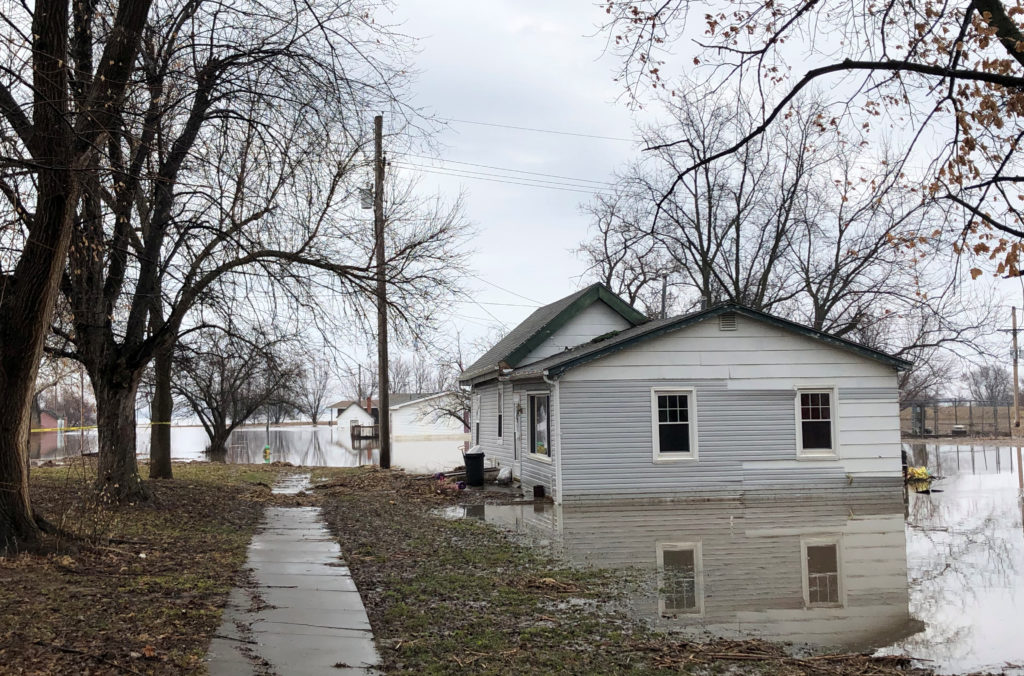 Homes sit in flood waters after leaving casualties and causing hundreds of millions of dollars in damages, with waters yet to crest in parts of the U.S. midwest, in Peru, Nebraska. Photo by Karen Dillon/Reuters

Gov. Pete Ricketts said Wednesday that roads, levees and other infrastructure have sustained an estimated $449 million in damage.

Ricketts says more than 2,000 homes and 341 businesses have been damaged or destroyed in the flood. The damage to private homes and businesses has reached $85 million so far, while farmers have experienced an estimated $400 million in cattle losses and $440 million in crop losses.

Ricketts stressed that the numbers are preliminary and subject to change. The numbers were included in the governor’s request for expedited assistance from the federal government.

The governor says 74 of Nebraska’s 93 counties and 85 of its cities are in a declared state of emergency.

The floodwaters have also damaged hundreds of homes in other Midwestern states and been blamed for three deaths.

Union Pacific says its crews are working around the clock so rail traffic can return to normal in Nebraska and adjacent states hit by flooding from a late-winter storm and snowmelt. 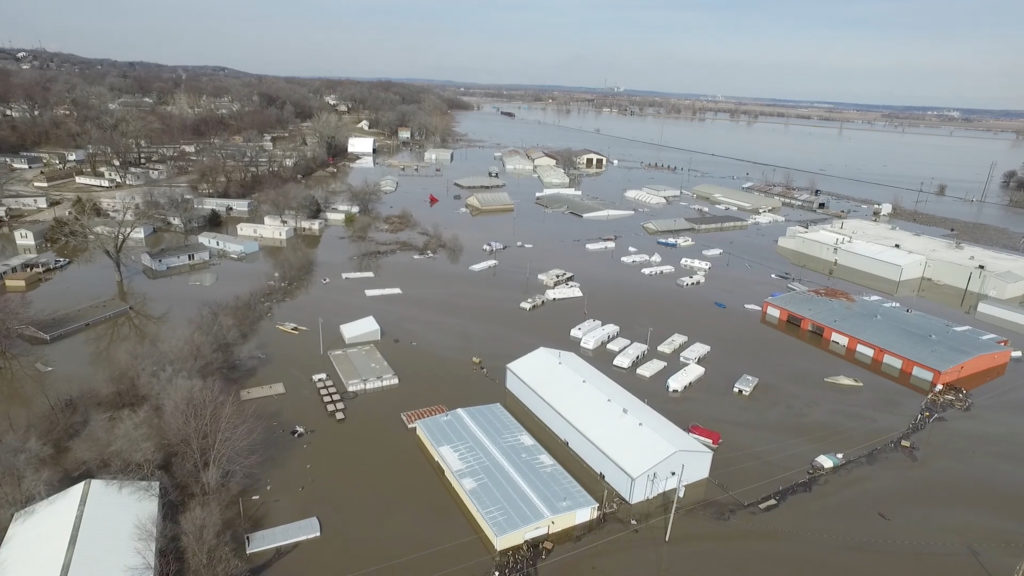 Flooded areas are seen in Bellevue, Nebraska on March 19, 2019 in this still image taken from a video obtained from social media on March 20, 2019. Photo by Bellevue Police Department via Reuters

Spokeswoman Raquel Espinoza said Wednesday that workers are clearing trees and other debris off the Omaha-based railroad’s tracks and have begun repairing them. She says bridges are also being repaired.

Espinoza says water still covers portions of the tracks between the Kansas City area and Council Bluffs, Iowa. The company is unsure when that line can be reopened. Levees have been breached or overtopped in southwest Iowa.

Passenger rail traffic along a popular Missouri route has been suspended and evacuations continue amid flooding along the Missouri River.

Amtrak said Tuesday that it was temporarily halting its Missouri River Runner Service between Kansas City and St. Louis. The company says that because of the flooding, freight traffic has been diverted to tracks Amtrak uses. Buses will transport passengers instead.

In northwest Missouri, two more levees were breached Tuesday and the 220 residents of the town of Craig were ordered to evacuate. Local officials say water also is lapping at the edge of the tiny town of Fortescue, where residents used excavators to create a makeshift levee.

The flooding has also taken a heavy toll on agriculture, inundating thousands of acres, threatening stockpiled grain and killing livestock.

Left: Lanni Bailey and a team from Muddy Paws Second Chance Rescue enter a flooded house to pull out several cats during the flooding of the Missouri River near Glenwood, Iowa, on March 18, 2019. Passport Aerial Photography/Handout via Reuters