Death toll rises to 8 as Florence pours on the rain

NEW BERN, N.C. — The Marines, the Coast Guard, civilian crews and volunteers used helicopters, boats and heavy-duty vehicles Saturday to rescue scores of people trapped by Florence’s shoreline onslaught, even as North Carolina braced for what could be the next stage of the disaster: widespread, catastrophic flooding inland.

“I cannot overstate it: Floodwaters are rising, and if you aren’t watching for them you are risking your life,” Gov. Roy Cooper said.

The death toll from the hurricane-turned-tropical storm climbed to eight.

A day after blowing ashore with 90 mph (145 kph) winds, Florence practically parked itself over land all day long and poured on the rain. With rivers rising toward record levels, thousands of people were ordered evacuated for fear the next few days could bring the most destructive round of flooding in North Carolina history.

More than 2 feet of rain had fallen in places, and the drenching went on and on, with forecasters saying there could be an additional 1½ feet by the end of the weekend. 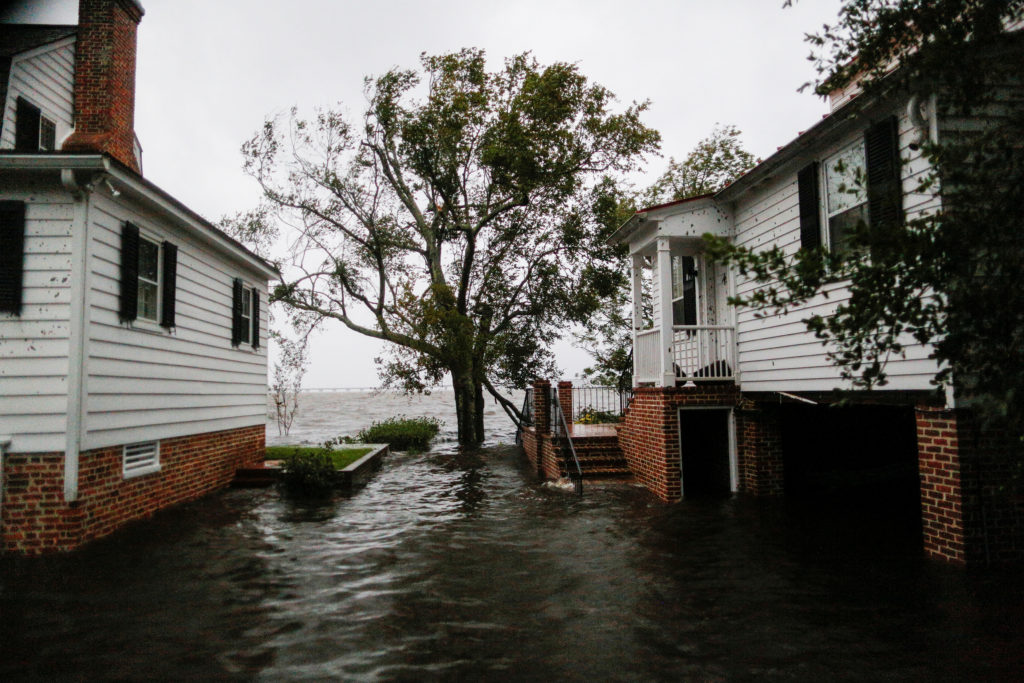 Water from the Neuse river floods the houses during the pass of Hurricane Florence the town of New Bern, North Carolina, on Sept. 14, 2018. Photo by Eduardo Munoz/Reuters

“I cannot overstate it: Floodwaters are rising, and if you aren’t watching for them you are risking your life,” Gov. Roy Cooper said.

As of 5 p.m., Florence was centered about 60 miles (95 kilometers) west of Myrtle Beach, South Carolina, inching west at 2 mph (4 kph) — not even as fast as a person walking. Its winds were down to 45 mph (75 kph). With half of the storm still out over the Atlantic, Florence continued to collect warm ocean water and dump it on land.

In its initial onslaught along the coast, Florence buckled buildings, deluged entire communities and knocked out power to more than 900,000 homes and businesses. But the storm was shaping up as a two-part disaster, with the second, delayed stage triggered by rainwater working its way into rivers and streams. 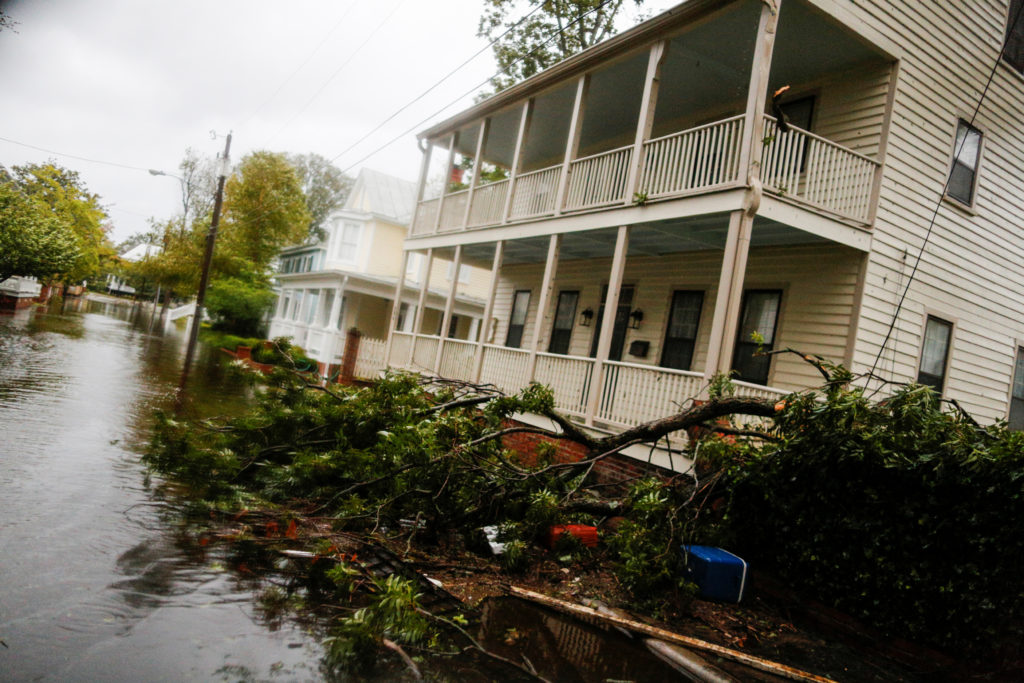 A downed tree and water from the Neuse river are seen on a flooded street during the passing of Hurricane Florence in the town of New Bern, North Carolina, on Sept. 14, 2018. Photo by Eduardo Munoz/Reuters

The flash flooding could devastate communities and endanger dams, roads and bridge.

Authorities ordered the immediate evacuation of up to 7,500 people living within a mile of a stretch of the Cape Fear River and the Little River, about 100 miles in from the coast. The evacuation zone included part of the city of Fayetteville, population 200,000.

Officials in nearby Harnett County urged residents of about 1,100 homes to clear out because the Lower Little River was rising toward record levels.

One potential road out was blocked as flooding forced the shutdown of a 16-mile (26-kilometer) stretch of Interstate 95, the main highway along the Eastern Seaboard.

In New Bern, along the coast, homes were completely surrounded by water, and rescuers used inflatable boats to reach people. More than 360 people had been carried to safety since Thursday night. 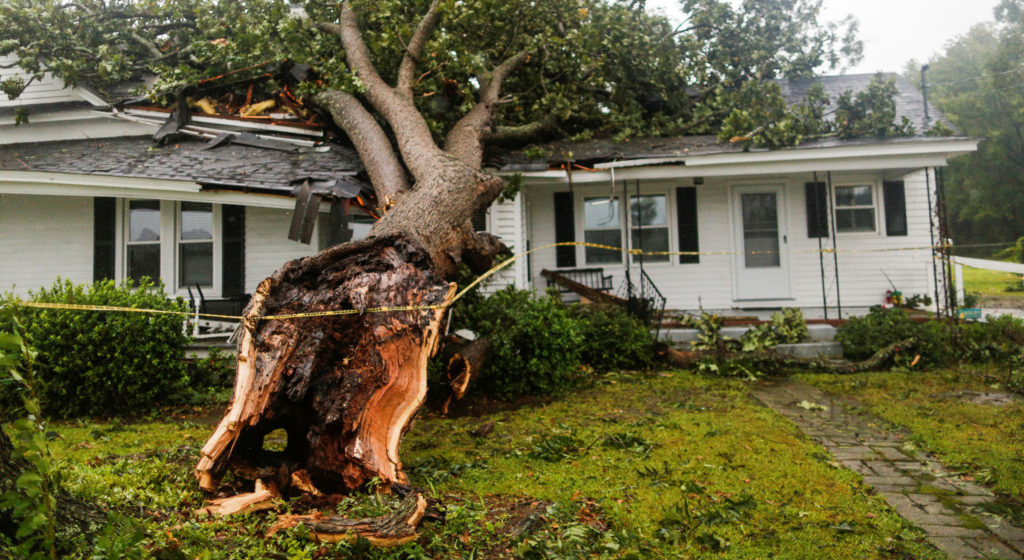 A downed tree rests on a house during the passing of Hurricane Florence in the town of Wilson, North Carolina, on Sept. 14, 2018. Photo by Eduardo Munoz/Reuters

Kevin Knox and his family were rescued from their flooded brick home with the help of Army Sgt. Johan Mackie, part of a team that was using a phone app to locate people in distress. Mackie rode in a boat through a flooded neighborhood, navigating through trees and past a fencepost to get to the Knox house.

“Amazing. They did awesome,” said Knox, who was stranded with seven others, including a boy who was carried out in a life vest. “If not we’d be stuck upstairs for the next … how long? I have no idea.”

Across the Trent River from New Bern, Jerry and Jan Andrews returned home after evacuating to find carp flopping in their backyard near the porch stairs.

Coast Guard helicopters were taking off across the street to rescue stranded people from rooftops and swamped cars. Coast Guard members said that choppers had made about 50 rescues in and around New Bern and Jacksonville as of noon.

Also, Marines rescued about 20 civilians from floodwaters near Camp Lejeune, using Humvees and amphibious assault vehicles, the base reported.

In Lumberton, about 80 miles inland, Jackie and Quinton Washington watched water filling both their front and back yards near the Lumber River . Hurricane Matthew sent more than 5 feet of water into their home in 2016, and the couple feared Florence would run them out again.

“If it goes up to my front step, I have to get out,” Quintin Washington said. 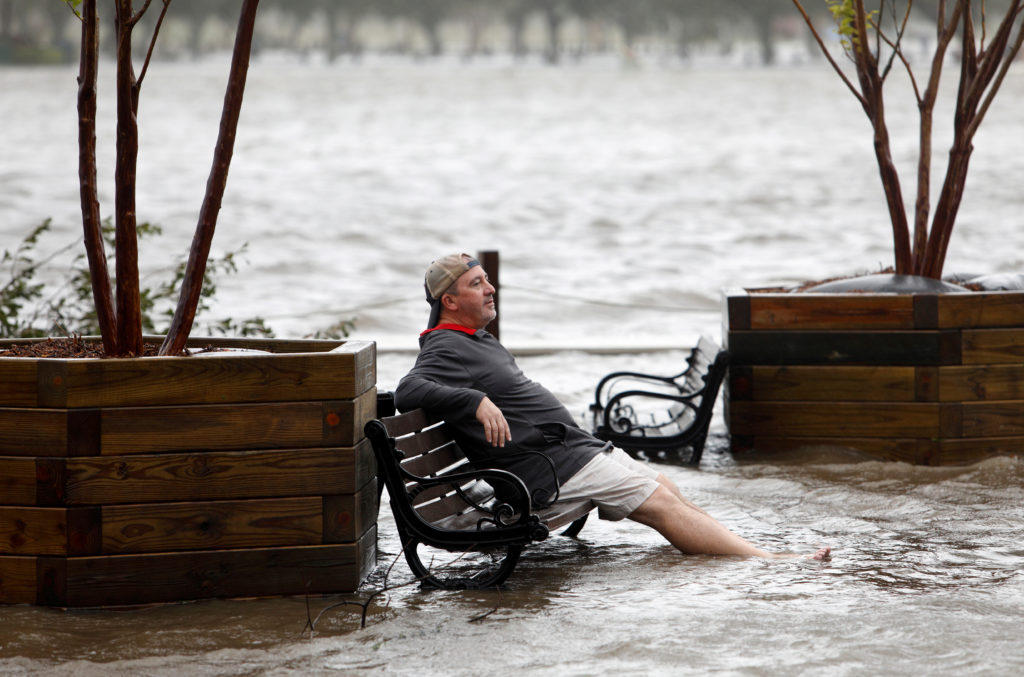 A man sits on a park bench in a flooded park as the Cape Fear River rises above its usual height in Wilmington, North Carolina, on Sept. 15, 2018. Photo by Jonathan Drake/Reuters

The dead included a mother and baby killed when a tree fell on a house in Wilmington, North Carolina. South Carolina recorded its first death from the storm, with officials saying a 61-year-old woman was killed when her car hit a tree that had fallen across a highway. Three died in one inland county, Duplin, because of water on roads and flash floods, the sheriff’s office said.

Retired Marine Garland King and his wife, Katherine, evacuated their home in New Bern on Friday and returned on Saturday, sharing a kiss and joining hands as they drew near their house.

“It was tough. Wobbling. I was looking for water moccasins to hit me at any time,” he said.

They finally made it, and found a soggy, stinking mess.

“The carpets. The floors. Everything is soaking wet,” Katherine King said. “We’re going to have to redo the whole inside.”

The National Hurricane Center said Florence broke a North Carolina rainfall record that had stood for almost 20 years: Preliminary reports showed Swansboro got over 30 inches and counting, obliterating the mark set in 1999, when Hurricane Floyd dropped just over 24 inches on the state.

As of noon, Emerald Isle had over 23 inches of rain, and Wilmington and Goldsboro had about a foot. North Myrtle Beach, South Carolina, had around 7 inches.

Stream gauges across the region showed water levels steadily rising, with forecasts calling for rivers to crest Sunday and Monday at or near record levels. The Little River, the Cape Fear, the Lumber, the Neuse, the Waccamaw and the Pee Dee were all projected to rise over their banks, flooding cities and towns.

The storm interrupted a September rite in the South: college football. Schools canceled, postponed, switched sites or changed kickoff times because of Florence. No. 2 Clemson and Georgia Southern had sunny skies and unseasonably mild weather for the only major conference game being played in the Carolinas and Virginia.

Forecasters said the storm will eventually break up over the southern Appalachians and make a sharp rightward swing to the northeast, its rainy remnants moving into the mid-Atlantic states and New England by the middle of the week.

Left: An abandoned car's hazard lights continue to flash as it sits submerged in a rising flood waters during pre-dawn hours after Hurricane Florence struck in Wilmington, North Carolina, on Sept. 15, 2018. Photo by Jonathan Drake/Reuters