Following verdict in Whitmer kidnapping case, some see freedom and others danger

Outside the Michigan courthouse where a jury did not convict any of the four men charged with planning to kidnap Gov. Gretchen Whitmer, a defense lawyer said jurors saw the alleged plot as what it was: Dirty FBI tactics and “rough talk.”

The men — who were heard on audio during the trial talking about killing Whitmer, blowing up a bridge and other violence — didn’t say anything shocking, attorney Michael Hills said. He noted one of the defense witnesses he considered calling to testify planned to assert that he’s “heard worse from pregnant mothers up on the Capitol.”

But to others, Friday’s outcome following a weekslong trial was a chilling reminder that the political violence that is raging across the U.S. too often goes unpunished. From attacks on social media and elsewhere that disproportionately affect women lawmakers, to the Jan. 6 insurrection at the U.S. Capitol and the plan to abduct Whitmer, people are increasingly angry and feeling emboldened to act on it, they say.

Whitmer, a Democrat, has blamed former President Donald Trump for stoking anger over COVID-19 restrictions and refusing to condemn right-wing extremists. On Friday, her office said people across the country are experiencing “a normalization” of violence. A Democratic state lawmaker said the threats posed won’t be taken seriously “until someone dies.”

“The plot to kidnap and kill a governor may seem like an anomaly. But we must be honest about what it really is: the result of violent, divisive rhetoric that is all too common across our country,” Whitmer’s chief of staff, JoAnne Huls, said in a statement. “There must be accountability and consequences for those who commit heinous crimes. Without accountability, extremists will be emboldened.”

Whitmer has not commented publicly on the outcome of the case. She wasn’t a trial witness and didn’t attend the trial.

Four men — Adam Fox, Barry Croft Jr., Brandon Caserta and Daniel Harris — were arrested in October 2020. Federal prosecutors said they wanted to kidnap Whitmer because they were angry over pandemic restrictions she imposed, and saw her as a “tyrant” who needed to be removed.

The charges came at a particularly divisive time, with debate raging over the pandemic and just weeks before the 2020 presidential election between Trump and Joe Biden. Armed protests were occurring at the Michigan Capitol and elsewhere in the U.S., and in the streets of many cities, demonstrations over the police killing of George Floyd at times turned violent.

Defense attorneys argued that the men were entrapped by the FBI — pulled into an alleged plot they would never have participated in if not for the government and its informants luring them. They painted the men as wannabes who were frequently high and easily influenced, or in one case, a former member of the military who wanted to brush up on firearms training. 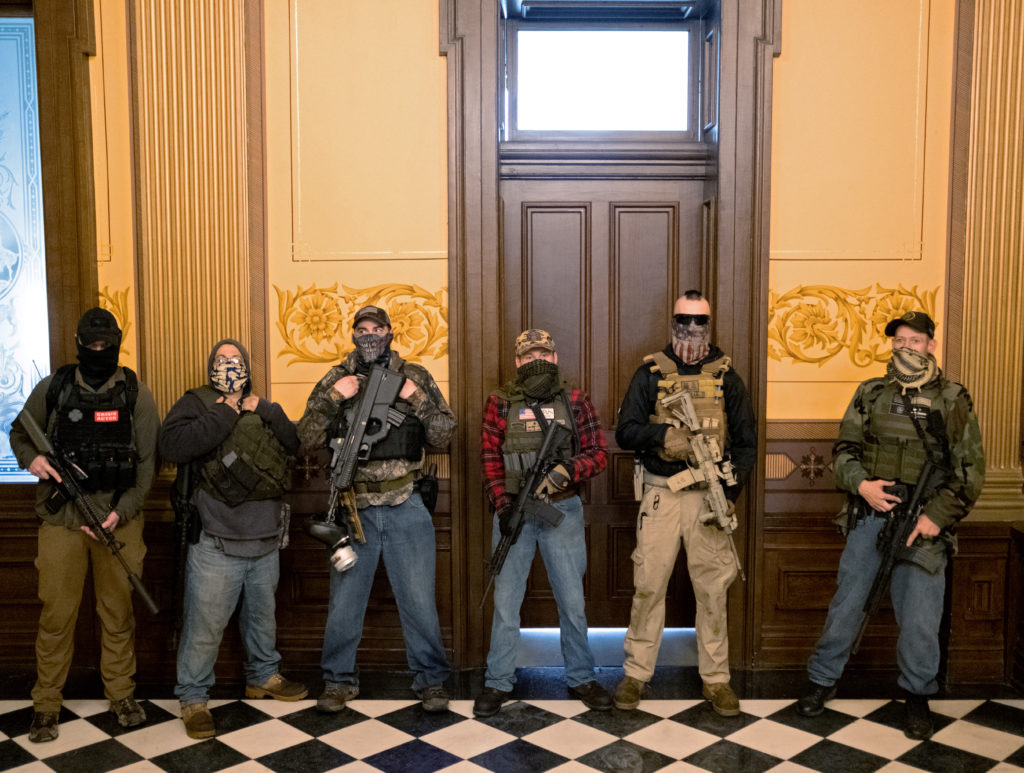 A militia group with no political affiliation from Michigan, including Pete Musico (R) who was charged October 8, 2020 for his involvement in a plot to kidnap the Michigan governor, attack the state capitol building and incite violence, stands in front of the Governors office after protesters occupied the state capitol building during a vote to approve the extension of Governor Gretchen Whitmer’s emergency declaration/stay-at-home order due to the coronavirus disease (COVID-19) outbreak, at the state capitol in Lansing, Michigan, U.S. April 30, 2020. Photo by Seth Herald/Reuters.

Before returning their verdicts, the jury said that after nearly five days of deliberations they could not agree unanimously on all 10 of the charges against the men.

Harris, 24, and Caserta, 33, were found not guilty of conspiracy. Harris also was acquitted of charges related to explosives and a gun.

The jury could not reach verdicts for Fox, 38, and Croft, 46, which means the government can put them on trial again.

U.S. Attorney Andrew Birge said after the verdicts that “We have two defendants that are awaiting trial and we’ll get back to work on that.”

Hills, who defended Caserta, said the outcome was a message to the government that the FBI’s actions were “unconscionable.” He said the federal government should “let it go” rather than take Croft and Fox to trial a second time.

Rep. Marjorie Taylor Greene, a Republican, tweeted after the verdict that the “FBI and DOJ need a complete and total cleansing. … All the rot must be removed and these agencies must be restored.”

Others were stunned by the jury’s decision, and said it set a dangerous example.

U.S. Rep. Debbie Dingell, a Democrat, called for an end to “the hatred and division in this country” and said she is “Deeply concerned that today’s decision in the Whitmer kidnapping trial will give people further license to choose violence and threats.”

Michigan Lt. Gov. Garlin Gilchrist called on elected officials, parents, teachers and others to stand up to “these hateful actions and teach our kids that there is a better way.”

“Our differences must be settled at the ballot box, not through violence,” he said. “We need to be honest and clear about what causes violence by extremists and do all we can to address the root cause of it.”

Michigan state Rep. Laurie Pohutsky, a Democrat, noted on Twitter that a man who threatened to kill her in 2020 was acquitted.

“The next time you ask why we can’t get good people to run for office, consider today’s verdict,” she said, adding, “This won’t be taken seriously until someone dies.”