WASHINGTON — Harold Brown, who as defense secretary in the Carter administration championed cutting-edge fighting technology during a tenure that included the failed rescue of hostages in Iran, has died at age 91.

Brown died Friday, said the Rand Corp., the California-based think tank which Brown served as a trustee for more than 35 years. His sister, Leila Brennet, said he died at his home in Rancho Santa Fe, California.

“The constant Cold War competition raged hot during the Carter administration and preoccupied me throughout the four years.” – Excerpt from book written by Harold Brown

Brown was a nuclear physicist who led the Pentagon to modernize its defense systems with weapons that included precision-guided cruise missiles, stealth aircraft, advanced satellite surveillance and improved communications and intelligence systems. He successfully campaigned to increase the Pentagon budget during his term, despite skepticism inside the White House and from Democrats in Congress.

That turbulent period included the Soviet Union’s invasion of Afghanistan and the Iranian hostage crisis. An effort in April 1980 to rescue the hostages failed when one of the helicopters on the mission struck a tanker aircraft in eastern Iran and crashed, killing eight U.S. servicemen.

“I considered the failed rescue attempt my greatest regret and most painful lesson learned,” Brown wrote in his book “Star Spangled Security.”

Brown faced numerous obstacles when he took the job as Pentagon chief, including pressure to reduce the defense budget both from within the administration and from influential congressional Democrats.

“When I became secretary of defense in 1977, the military services, most of all the army, were disrupted badly by the Vietnam War. There was general agreement that the Soviet Union outclassed the West in conventional military capability, especially in ground forces in Europe,” he wrote later.

Wary of the growing Soviet threat, Brown sought to withstand the pressure to cut defense and, gradually, managed to increase spending.

“The constant Cold War competition raged hot during the Carter administration and preoccupied me throughout the four years,” Brown wrote. He noted later that “the Defense Department budget in real terms was 10 to 12 percent more when we left than when we came in,” which he said was not an easy accomplishment. 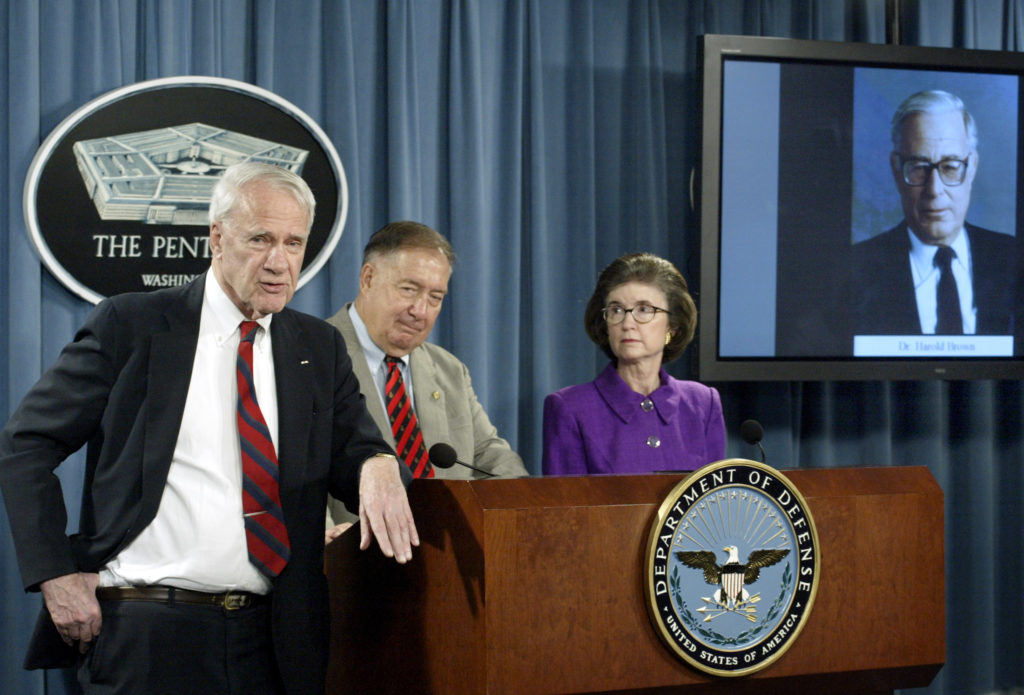 And he cited the technological advances in defense systems, especially weapons systems such as precision-guided cruise missiles, stealth aircraft and advanced satellite surveillance.

“Some of these came to visible fruition 10 years later during Desert Storm, which reversed Saddam Hussein’s occupation of Kuwait,” he wrote. “The Carter administration initiated and developed these programs, the Reagan administration paid for their acquisition in many cases, and the George H.W. Bush administration employed them.”

Brown later maintained that his extensive work with the Soviets on the arms race was not wasted.

“We also reached a specific strategic arms control agreement with the Soviet Union,” he wrote. “Though never formally ratified, the agreement was adhered to by both parties and limited Soviet threats that our other conventional and nuclear weapons programs were designed to counter.”

The acting defense secretary, Patrick Shanahan, said in a statement Saturday that Brown’s “steady leadership piloted our nation through a consequential segment of the Cold War. His focus on deterrence through a strong nuclear triad facilitated long-term peace and stability in the United States and Europe.” Shanahan praised Brown for his “devoted leadership and lifetime of service.”

Brown was born in New York City on Sept. 19, 1927, attended public schools and went to Columbia University on an accelerated wartime schedule, receiving an undergraduate degree in physics in 1945 “when I was not quite 18,” then going to graduate school at Columbia, receiving a doctorate in physics.

Saddened by the loss of this intellectual giant & true public supporter. We are proud of his longtime support of @randcorporation and @pardeerand RIPHarold Brown, Defense Secretary in Carter Administration, Dies at 91 https://t.co/HKsjTs1Bgs

I loved this Harold Brown line about the Soviets: "When we build, they build; when we stop, they build." https://t.co/TeoOJV9cIg

SecDef Ash Carter writes he and SecDef Harold Brown “had a special connection,” in this thoughtful remembrance. pic.twitter.com/NTuFZNi4ga

Not long after graduation he moved to California and went to work on projects that related to the development of plutonium. He then went to work at a nuclear weapons lab. He worked his way up to director of the Lawrence Radiation Laboratory at Livermore in 1960.

In 1961, Defense Secretary Robert McNamara invited him to be director of defense research and engineering in the Kennedy administration. In 1965 he became secretary of the Air Force during the Johnson administration and, as he described it later, “served in that role through some of the most difficult and divisive parts of the Vietnam War.”

After the 1968 election put a Republican, Richard Nixon, back in the White House, Brown accepted the position of president at the California Institute of Technology in Pasadena serving until he went back into government work and was a delegate to the Strategic Arms Limitation Talks in the 1970s,

Carter nominated Brown to be defense secretary in 1977. He was quickly confirmed and served throughout Carter’s term. During the 1980 campaign Brown actively defended the Carter administration’s policies, speaking frequently on national issues in public.

After leaving the Pentagon, he remained in Washington, joining the Johns Hopkins University School of Advanced International Studies as a visiting professor and later the university’s Foreign Policy Institute as chairman. He remained active in matters of national security, including service on the Defense Policy Board, which meets quarterly to offer perspectives to the current secretary of defense. He served as a consultant to many corporations, often serving as a member of the board of directors.

At a farewell address from his job as defense secretary, Brown said: “Most satisfying of all is that for four years our nation remained at peace despite the world tensions and turmoil that constantly pose challenges to our interest and peace.”