Fossil from Ethiopia reveals face for ancestor of famed ‘Lucky’

NEW YORK — A fossil from Ethiopia is letting scientists look millions of years into our evolutionary history — and they see a face peering back.

The find, from 3.8 million years ago, reveals the face for a presumed ancestor of the species famously represented by Lucy, the celebrated Ethiopian partial skeleton found in 1974.

This ancestral species is the oldest known member of Australopithecus, a grouping of creatures that preceded our own branch of the family tree, called Homo.

The ancestral species is the oldest known member of a grouping of creatures that preceded our own branch of the family tree, called Homo.

Scientists have long known that this species — A. anamensis — existed, and previous fossils of it extend back to 4.2 million years ago. But the discovered facial remains were limited to jaws and teeth. The newly reported fossil includes much of the skull and face.

It was described Wednesday in the journal Nature by Yohannes Haile-Selassie of the Cleveland Museum of Natural History and co-authors.

READ MORE: Dinosaurs are back with a climate change warning at the Smithsonian

The face apparently came from a male. Its middle and lower parts jut forward, while Lucy’s species shows a flatter mid-face, a step toward humans’ flat faces. The fossil also shows the beginning of the massive and robust faces found in Australopithecus, built to withstand strains from chewing tough food, researchers said. 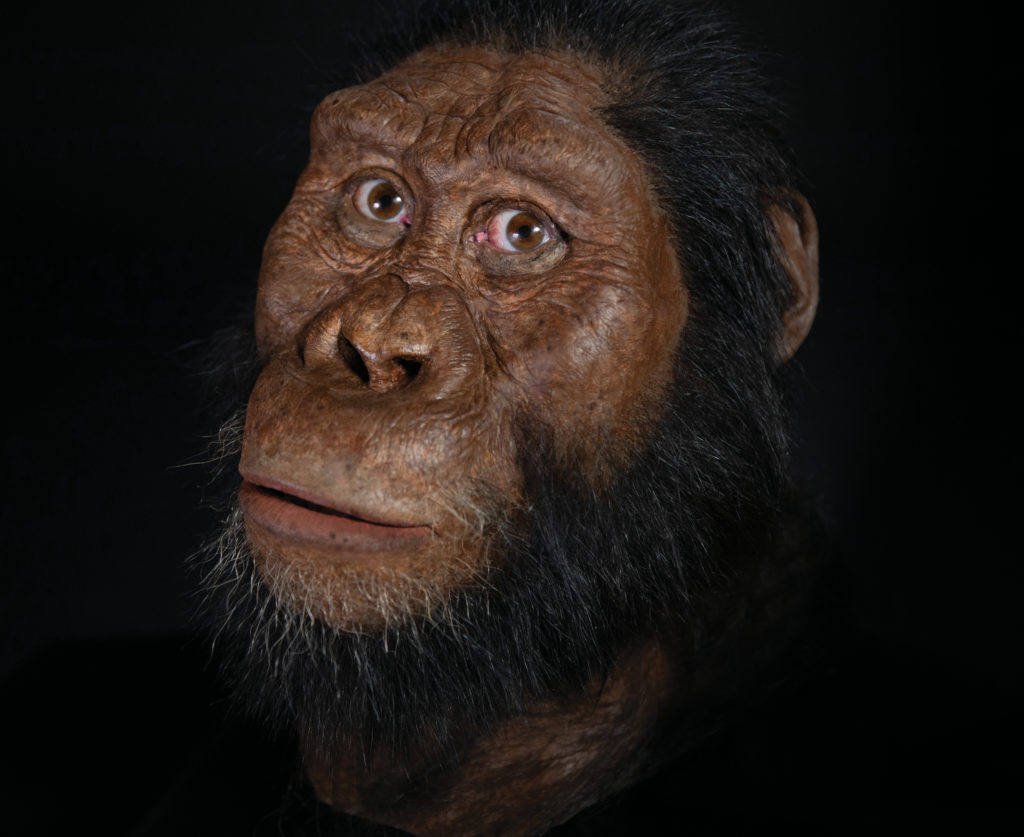 Facial reconstruction by John Gurche made possible through generous contribution by Susan and George Klein. Courtesy of the Cleveland Museum of Natural History

The fossil was found in 2016, in what was once sand deposited in a river delta on the shore of lake. At the time the creature lived, the area was largely dry shrubland with some trees. Other work has shown A. anamensis evidently walked upright, but there’s no evidence that it flaked stone to make tools, said study co-author Stephane Melillo of the Max Planck Institute for Evolutionary Anthropology in Leipzig, Germany.

Experts unconnected to the new study praised the work. Eric Delson of Lehman College in New York called the fossil “beautiful” and said the researchers did an impressive job of reconstructing it digitally to help determine its place in the evolutionary tree.

With a face for A. anamensis, said Zeray Alemseged of the University of Chicago, “now we know how they looked and how they differed from the Lucy species.”

The question of just how Lucy’s species arose from the older one remains open.

William Kimbel, who directs the Institute of Human Origins at Arizona State University, said the discovery helps fill a critical gap in information on the earliest evolution of the Australopithecus group.

The study’s authors said the finding indicates A. anamensis hung around for at least 100,000 years after producing Lucy’s species, A. afarensis. That contradicts the widely accepted idea that there was no such overlap, they wrote.

Scientists care about overlap because its presence or absence can indicate the process by which one species gave rise to another. The paper’s argument for overlap rests on its conclusion that a forehead bone previously found in Ethiopia belongs to Lucy’s species.

But several experts, including Kimbel, were not convinced that conclusion is correct. So the question of just how Lucy’s species arose from the older one remains open, Kimbel said in an email.

Left: Facial reconstruction by John Gurche made possible through generous contribution by Susan and George Klein. Courtesy of the Cleveland Museum of Natural History