Dinosaurs are back with a climate change warning at the Smithsonian

One hundred and eight years is just a blink of an eye for ancient bones and rocks. Yet since the Hall of Fossils first opened at the Smithsonian National Museum of Natural History in 1911, humans have fought two world wars, developed a global economy and entered the digital age. We’ve also forced changes to the planet at a speed previously only witnessed through “Deep Time,” the millions and billions of years that define how Earth evolved.

Just a century of relentless carbon emissions and dramatic shifts in resource use have lead to the extinction of hundreds of vertebrate species and other profound changes that parallel prehistoric upheavals. The time had come for a fossil hall update.

Taking environmental lessons buried across Deep Time as its central theme, the David H. Koch Hall of Fossils opens to the public on June 8, after a four-year renovation. 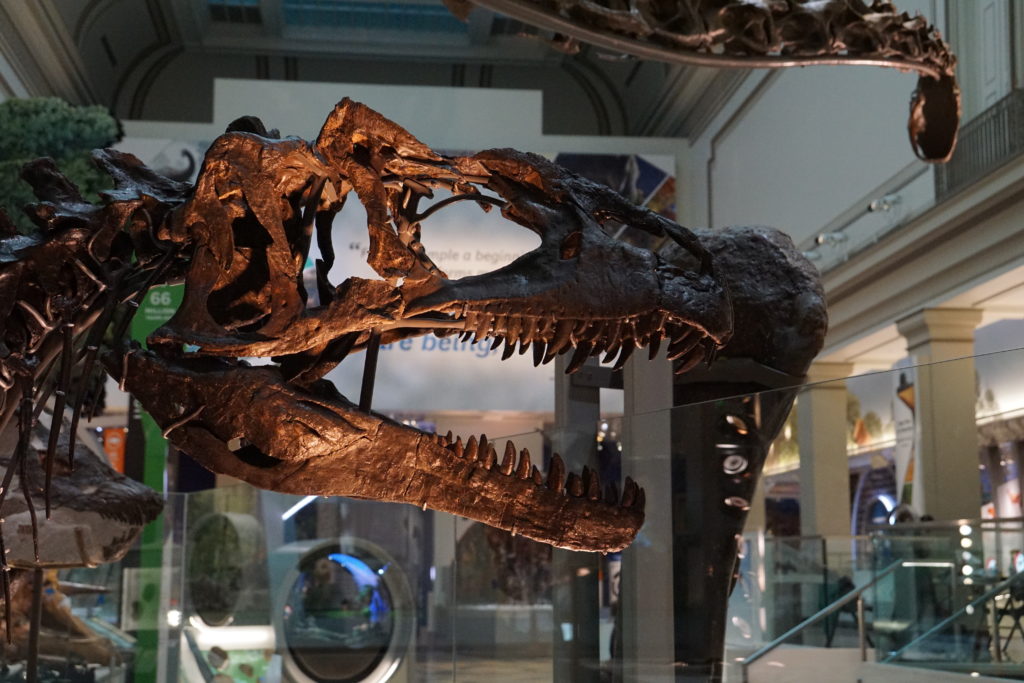 An Allosaurus skeleton is one of more than 700 specimens in the new Hall of Fossils at the National Museum of Natural History. Image by Vicky Stein

“Dinosaurs are a point of entry for visitors of all ages — families, individuals — into this great story,” said Siobhan Starrs, the project manager for the exhibit. “As you journey back into deep time you can see the same types of things happening on the planet that we see happening today written in the rock, written in the fossils.”

The PBS NewsHour was invited to tour the hall in its final preparations. Along with the new theme, its exhibits remain packed with fossils — more than 700 specimens in all, from tiny teeth to the massive, blockbuster beasts. The museum’s beloved Triceratops, estimated to be 66 million years old and on display since the original opening, is in a completely new pose — as prey for the Tyrannosaurus rex. 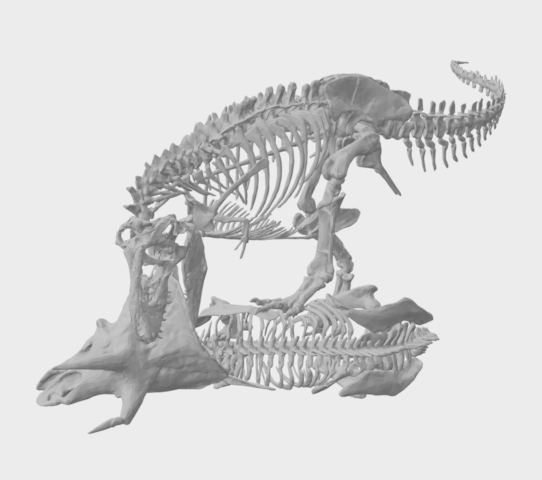 Like the 90-foot-long Diplodocus stretching its long neck and tail across the room, the idea of sweeping change hangs over the hall. Looking back through our planet’s epochs, those historical changes can shed light on the climate crisis we’re seeing today.

Discoveries in the new hall

When the museum staff started disassembling all the old armatures and removed specimens, they discovered wonders buried within the walls themselves.

“It was almost like a second field expedition all over again,” Starrs said.

For example, the old hall featured a duck-billed dinosaur, otherwise known as an Edmontosaurus, embedded in a wall 35 feet above the ground. Yet when they peeled away the plaster, the team discovered parts of the specimen remained encased in rock — the skeleton had never been fully excavated. 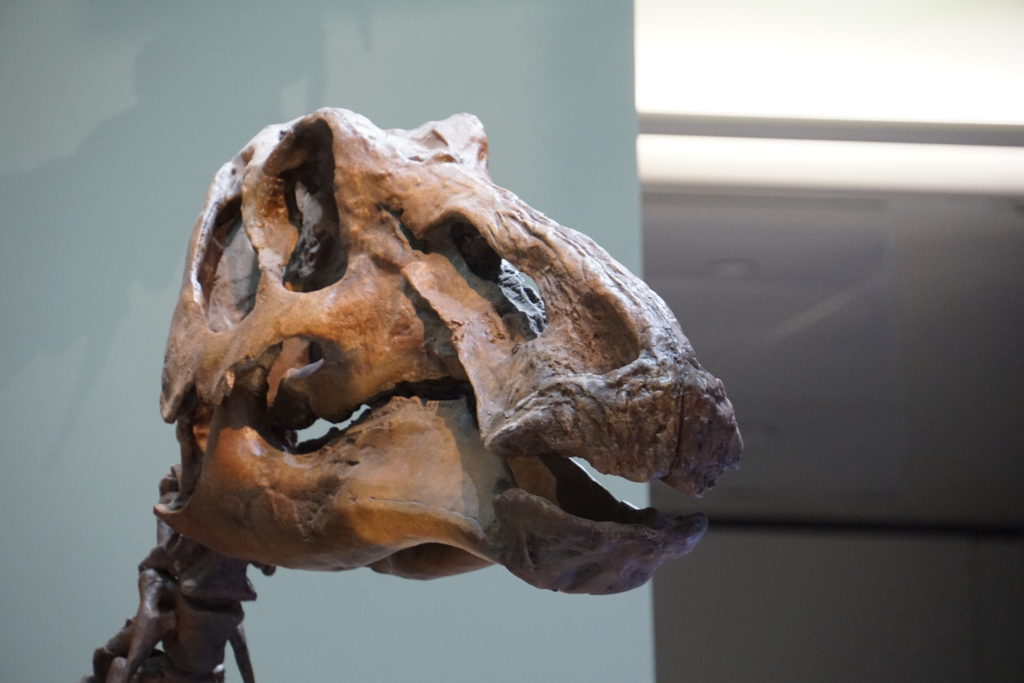 This Edmontosaurus was half-hidden in a wall, still embedded in the same rock where its bones were first discovered. Now the team has fully excavated it so that the animal stands on its own once more. Image by Vicky Stein/NewsHour

Scientists chipped away the rock to get a full view, uncovering “perfectly preserved tendons and muscles” that no one had ever seen before, Starrs said. The renovation unearthed two other fossils — the predatory Ceratosaur and a Tylosaur, a marine reptile — that had been partially concealed by the old walls, likely as a cost-saving measure during their original installation.

“Back in the day they used to actually drill holes up inside the bones and snake wire through to help mount them upright,” Starrs said.

That Triceratops-turned-rex-food is one example — some of its fossilized bones were irreparably damaged by previous attempts to pose them. “That’s something that we would never do today because we know in doing that you are coring away at real fossil material that you can never again get back,” Starrs said. 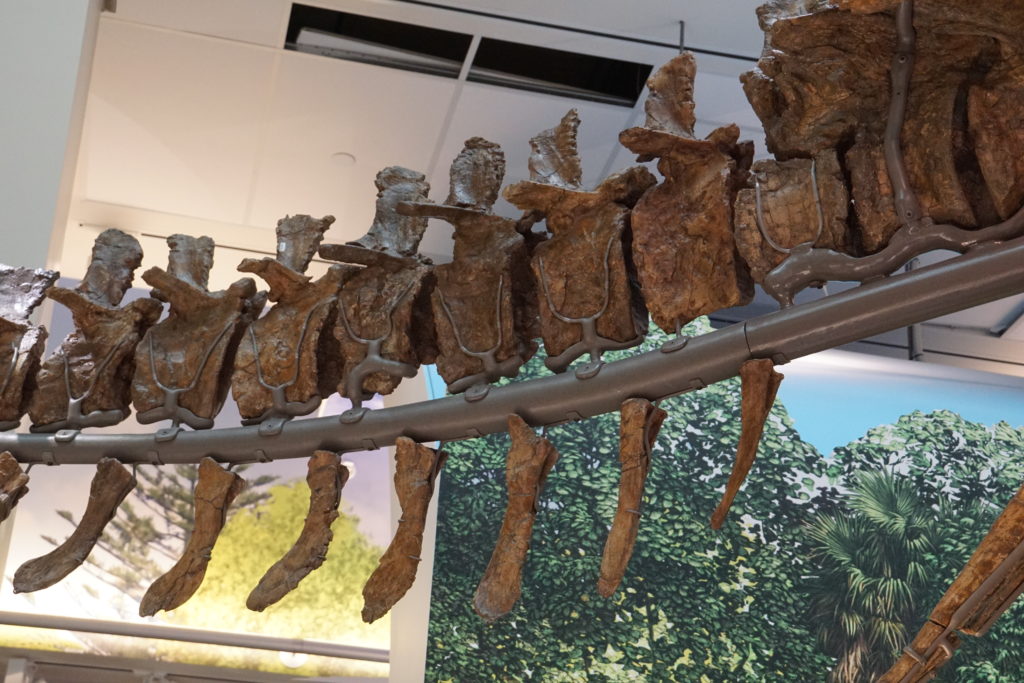 Viewers can identify which bones are real fossils and which are custom replicas by checking which pieces are carefully cradled by metal brackets and which are directly attached to the metal frame. Image by Vicky Stein/NewsHour

These days, they construct careful brackets for each and every bone, and make casts or replicas for missing bones out of realistic-looking, lightweight (and fire-safe) composite materials. The skeletons are posed based on scientists’ best understanding of how these animals would have lived. Some are mid-run, some squat next to their eggs. The intimidating T. rex and defeated Triceratops are posed together because they did, in fact, live at the same time and in the same area — both would have been found in North America during the late Cretaceous period.

As a bonus, the brackets on the fossils are individually removable, so that bones can be studied by interested researchers without disassembling the entire skeleton on display.

The dynamically posed fossils are the point of entry — they’ve long been a big draw for one of the world’s most-visited science museums. But Starrs and the exhibit designers hope that visitors leave with more than awe for long-dead dinosaurs and a tusked mastodon, and take away an echo of history.

The process of becoming a fossil turns bone into rock — heavy and brittle — and according to architect Pauline Dolovich, the original hall just wasn’t designed to hold up the weight of so much stone. For more than a century, all of that material and all those visitors have been supported from below by terra cotta archways.

In the new exhibit, a steel lattice criss-crosses under the floor. It’s hidden from view but provides vital support to the metal structures that hold up free-standing fossils like the massive Diplodocus.

That allowed designers to place skeletons anywhere in the hall, where they best fit with the storyline. Creating hidden structural support from below also allowed them to restore much of the original character of the hall. Given it is a historic building, each doorway, window and marble panel had to be put back in its original place.

About 56 million years ago, the planet warmed rapidly due to a sudden release of carbon dioxide into the atmosphere.

“That ancient event was at least 10 times slower than the change we’re causing now, but the amount of carbon that was released is probably similar to the amount of carbon that’s in all the world’s fossil fuel reservoirs,” curator and paleobotanist Scott Wing said, after pointing out an area of the exhibit that displays fossils from the Paleocene–Eocene Thermal Maximum. During this period, the oceans acidified and atmospheric patterns shifted, presaging current-day climate crises.

Paleontologists can read the results of increased carbon dioxide in the rocks themselves. Changes in the way sediment is laid down reveals where a climate changed from seasonal rain to long periods of drought punctuated by short flash floods. Preserved bug bites in fossilized leaves show how plant pests became more active as temperatures rose.

One of the weirdest shifts: Dwarfs showed up. Not Snow White-style dwarfs, but animals — insects, horse ancestors, worms — that decreased in size generation by generation as temperatures warmed.

“It could be that the warming itself led the smaller individuals to be more successful,” Wing said. But it’s also known from experiments today that increasing the amount of carbon dioxide in the atmosphere can cause plants to make less protein.

Those ancient plants became less nutritious for the animals that ate them, making it harder to grow large, Wing added. The most successful animals were those that reproduced at a smaller size. That pattern repeats in the modern day — the same body size shrinkage has been seen in beetles, fish, birds and bison in our lifetime. 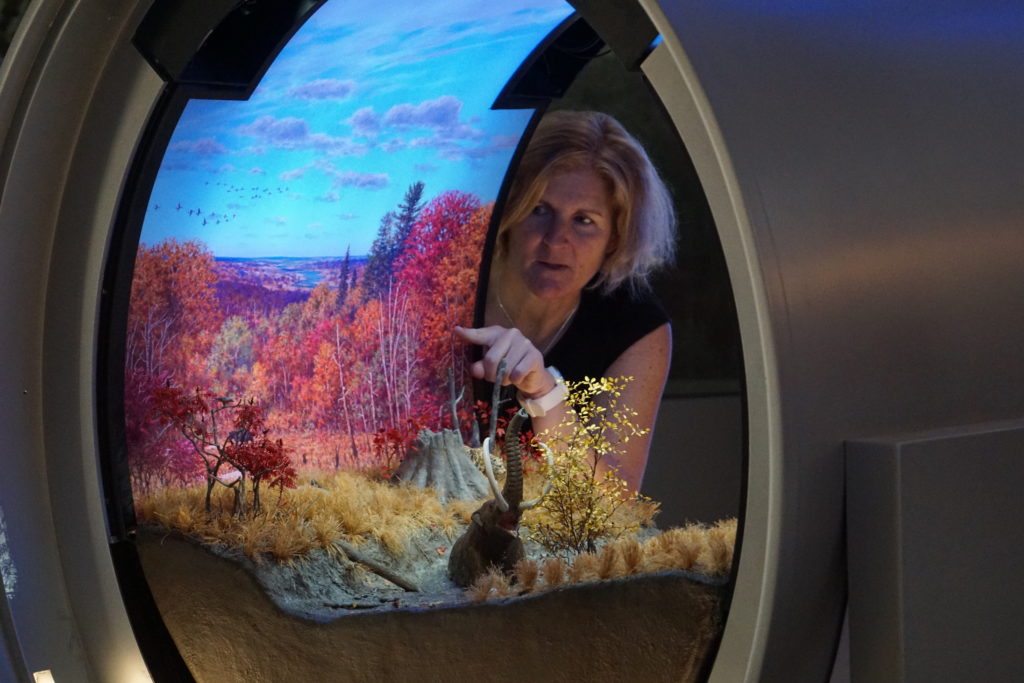 Project leader Siobhan Starrs points out the details in one of the new miniature dioramas that will give a glimpse of life on Earth thousands or millions of years ago. Image by Vicky Stein/NewsHour

When people walk in the door, they’re greeted by a life-size bronze statue of their own ancient ancestor, a woman carrying a baby who would have lived during the most recent ice ages. “It’s really our story,” Starrs said.

The hope, she said, is that the long lens we use to view the past could help visitors understand the present and the future that we are now creating.

Left: The new David H. Koch Hall of Fossils encompasses a sweeping arc of time, with old favorite fossils like Triceratops and Diplodocus as well as new interactive features. Image by Vicky Stein/NewsHour

At Smithsonian’s renovated Hall of Fossils, dinosaurs are just the beginning