Free speech, and what came after

I used to keep a gas mask and a police-style helmet in the back of the car. That was when I was reporting on the Berkeley campus of the University of California for the NBC television station in Sacramento. It was during the Vietnam War in the early 1970s, and the anti-war movement was in full swing. Berkeley was action central for marches and confrontations with the police, which occurred — as I remember it — like clockwork.

And my gas mask and helmet didn’t stay in the car: there was plenty of anger in the streets, plenty of action. Tear gas and police batons often filled the air on and off campus. Emotions ran high. Often the reason behind the demonstrations and marches — ending the war — was lost in the battles between the protestors and the cops. Who was provoking who became the issue, and certainly it made exciting television. Homegrown battles filled the airwaves, to the point where they eventually became routine. How many of those marchers were actually students wasn’t ever clear, but U.C. Berkeley became the symbol of anti-establishment, anti-war, anti-military activism.

Why bring this up now? Because 50 years ago this month a student movement began that morphed into those huge demonstrations. Long before the Vietnam War, in 1964, students on the Berkeley campus ignited protests over a ban on political activity. Civil rights advocates, some of whom had gone to the Deep South to protest segregation, were trying to organize on campus, and the university administration said no. An activist graduate student named Jack Weinberg was arrested, put into a police car, stayed there for 32 hours as crowds built up and kept the car from moving. That was the beginning of the Free Speech Movement (FSM).

Here’s the way Weinberg, now a global environmental consultant, back on campus for the 50th anniversary of the Free Speech Movement, told me about it:

“We set up a big table and were trying to tell the story of the right to engage in the civil rights movement that the university was stopping, and the dean came up to me and told me to take down the table. And I said, ‘I’m sorry. I can’t do that. I can’t cooperate with you.’ And so he, the campus police put me under arrest, and then they made the mistake of bringing a police car onto campus.” 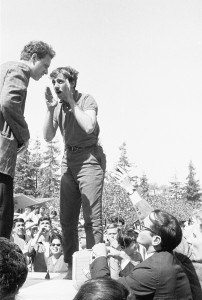 Student activists Jack Weinberg and Mario Savio speaking to each other on top of the police car. Photo by U.C. Berkeley, Bancroft Library

The FSM had limited goals, and even today its founders claim it was orderly and disciplined and intellectual. But its hero, Mario Savio, was a firebrand speaker who inspired his new followers to organize and speak out, not politely asking for but demanding political freedom. And when it won that freedom, it didn’t just fade into the woodwork. It had set in motion a model that was followed all across the country in a variety of causes.

What happened next — the massive and sometimes violent demonstrations over civil rights, women’s causes and the war — was more divisive than the FSM itself had been. A few former members of the group who have become more conservative have spoken out saying the movement went too far, that it got out of hand, that it didn’t really support free speech for anyone but itself, that it swallowed left-wing ideology without criticism. And that led to unruly, undemocratic protests that did more harm than good.

“You can have peace and quiet in a cemetery … When people have the right to express themselves and organize for whatever they are, you’re always going to find some things that you find objectionable … But I think that American society is much better off today than it was in the ’50s when there was very little freedom of any kind. Unless you were dressed the right way and spoke the right way and thought the right way, you were marginalized.“ 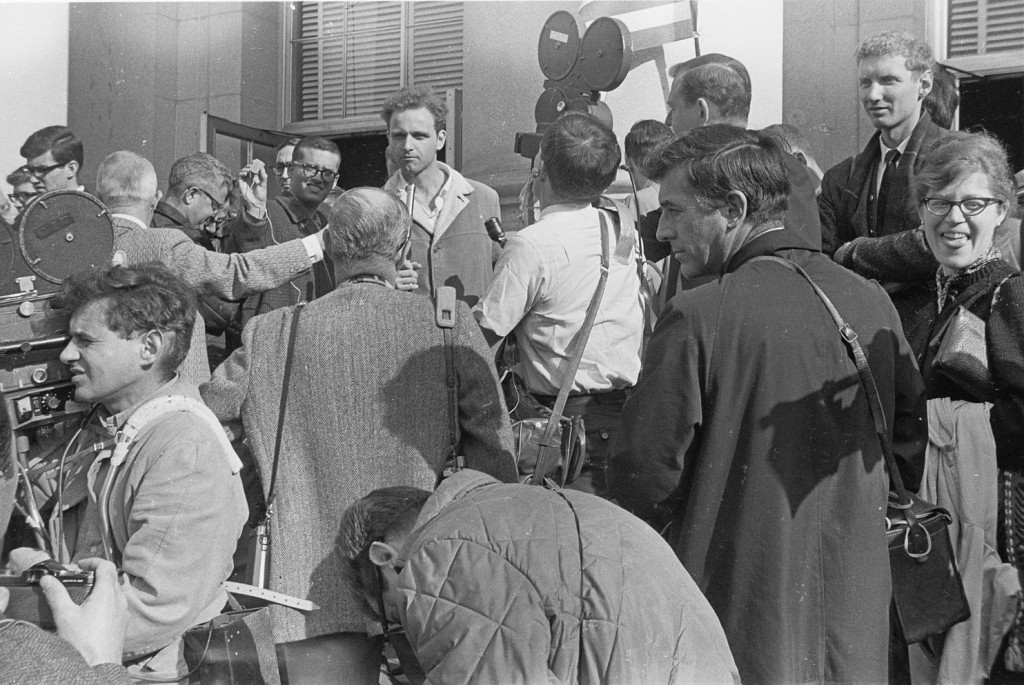 Fifty years after the FSM was born, the debate over what it wrought continues, though not with as much urgency as during the ’70s. The official anger at the movement has turned into a kind of pride, at least in some circles. On the Berkeley campus, guides take visitors and prospective students to the Free Speech Movement café, tell them about the movement, and show them the “Mario Savio Steps” at Sproul Hall, the site of hundreds of battles and demonstrations in the past. This semester, the university encouraged classes that study the FSM and Savio, and debated anew the philosophy, tactics and legacy of former students, who are now in their 70s and 80s.

These days, massive protests are few and far between; campus activism has a new, more digital face, though “Occupy” and Ferguson, Missouri, have sparked some big demonstrations around the country.

I got rid of my gas mask and helmet decades ago, but the era of student protests and what they evolved into remain part of this country’s history and my own involvement in it.

Watch the NewsHour tonight at 6 p.m. EDT for special correspondent Spencer Michels’ report on how campus activism has changed 50 years after the Berkeley protests launched the Free Speech Movement.