From shell-shock to PTSD, a century of invisible war trauma

In the wake of World War I, some veterans returned wounded, but not with obvious physical injuries. Instead, their symptoms were similar to those that had previously been associated with hysterical women – most commonly amnesia, or some kind of paralysis or inability to communicate with no clear physical cause.

English physician Charles Myers, who wrote the first paper on “shell-shock” in 1915, theorized that these symptoms actually did stem from a physical injury. He posited that repetitive exposure to concussive blasts caused brain trauma that resulted in this strange grouping of symptoms. But once put to the test, his hypothesis didn’t hold up. There were plenty of veterans who had not been exposed to the concussive blasts of trench warfare, for example, who were still experiencing the symptoms of shell-shock. (And certainly not all veterans who had seen this kind of battle returned with symptoms.)

We now know that what these combat veterans were facing was likely what today we call post-traumatic stress disorder, or PTSD. We are now better able to recognize it, and treatments have certainly advanced, but we still don’t have a full understanding of just what PTSD is.

The medical community and society at large are accustomed to looking for the most simple cause and cure for any given ailment. This results in a system where symptoms are discovered and cataloged and then matched with therapies that will alleviate them. Though this method works in many cases, for the past 100 years, PTSD has been resisting.

We are three scholars in the humanities who have individually studied PTSD – the framework through which people conceptualize it, the ways researchers investigate it, the therapies the medical community devises for it. Through our research, each of us has seen how the medical model alone fails to adequately account for the ever-changing nature of PTSD.

What’s been missing is a cohesive explanation of trauma that allows us to explain the various ways its symptoms have manifested over time and can differ in different people.

Nonphysical repercussions of the Great War

Once it became clear that not everyone who suffered from shell-shock in the wake of WWI had experienced brain injuries, the British Medical Journal provided alternate nonphysical explanations for its prevalence:

Shell-shock went from being considered a legitimate physical injury to being a sign of weakness, of both the battalion and the soldiers within it. One historian estimates at least 20 percent of men developed shell-shock, though the figures are murky due to physician reluctance at the time to brand veterans with a psychological diagnosis that could affect disability compensation.

Soldiers were archetypically heroic and strong. When they came home unable to speak, walk or remember, with no physical reason for those shortcomings, the only possible explanation was personal weakness. Treatment methods were based on the idea that the soldier who had entered into war as a hero was now behaving as a coward and needed to be snapped out of it. 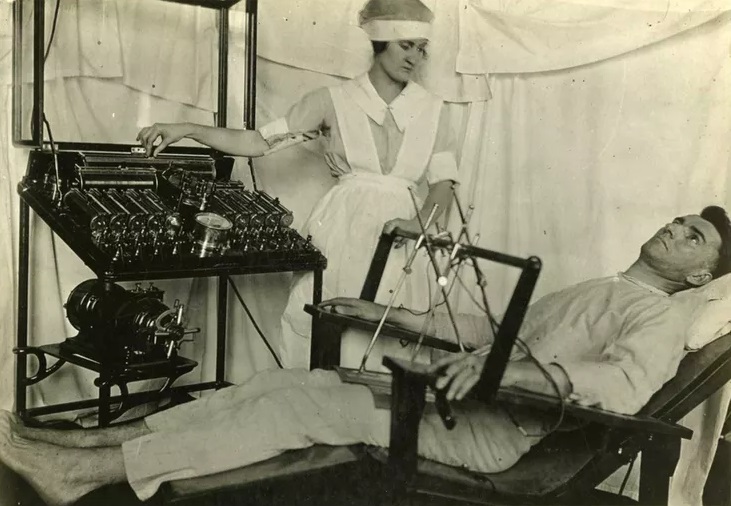 Lewis Yealland, a British clinician, described in his 1918 “Hysterical Disorders of Warfare” the kind of brutal treatment that follows from thinking about shell-shock as a personal failure. After nine months of unsuccessfully treating patient A1, including electric shocks to the neck, cigarettes put out on his tongue and hot plates placed at the back of his throat, Yealland boasted of telling the patient, “You will not leave this room until you are talking as well as you ever did; no, not before… you must behave as the hero I expect you to be.”

Yealland then applied an electric shock to the throat so strong that it sent the patient reeling backwards, unhooking the battery from the machine. Undeterred, Yealland strapped the patient down to avoid the battery problem and continued to apply shock for an hour, at which point patient A1 finally whispered “Ah.” After another hour, the patient began to cry and whispered, “I want a drink of water.”

Yealland reported this encounter triumphantly – the breakthrough meant his theory was correct and his method worked. Shell-shock was a disease of manhood rather than an illness that came from witnessing, being subjected to and partaking in incredible violence.

Evolution away from shell-shock

The next wave of the study of trauma came when the Second World War saw another influx of soldiers dealing with similar symptoms.

It was Abram Kardiner, a clinician working in the psychiatric clinic of the United States Veterans’ Bureau, who rethought combat trauma in a much more empathetic light. In his influential book, “The Traumatic Neuroses of War,” Kardiner speculated that these symptoms stemmed from psychological injury, rather than a soldier’s flawed character.

Work from other clinicians after WWII and the Korean War suggested that post-war symptoms could be lasting. Longitudinal studies showed that symptoms could persist anywhere from six to 20 years, if they disappeared at all. These studies returned some legitimacy to the concept of combat trauma that had been stripped away after the First World War. 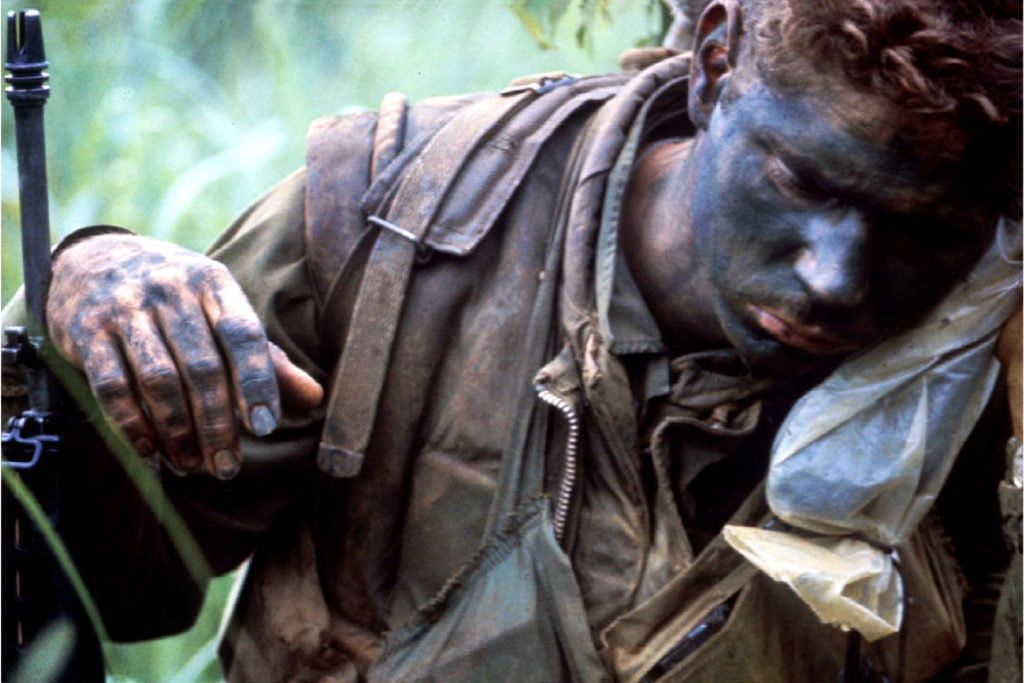 Vietnam was another watershed moment for combat-related PTSD because veterans began to advocate for themselves in an unprecedented way. Beginning with a small march in New York in the summer of 1967, veterans themselves began to become activists for their own mental health care. They worked to redefine “post-Vietnam syndrome” not as a sign of weakness, but rather a normal response to the experience of atrocity. Public understanding of war itself had begun to shift, too, as the widely televised accounts of the My Lai massacre brought the horror of war into American living rooms for the first time. The veterans’ campaign helped get PTSD included in the third edition of the Diagnostic and Statistical Manual for Mental Disorders (DSM-III), the major American diagnostic resource for psychiatrists and other mental health clinicians.

The authors of the DSM-III deliberately avoided talking about the causes of mental disorders. Their aim was to develop a manual that could simultaneously be used by psychiatrists adhering to radically different theories, including Freudian approaches and what is now known as “biological psychiatry.” These groups of psychiatrists would not agree on how to explain disorders, but they could – and did – come to agree on which patients had similar symptoms. So the DSM-III defined disorders, including PTSD, solely on the basis of clusters of symptoms, an approach that has been retained ever since.

This tendency to agnosticism about the physiology of PTSD is also reflected in contemporary evidence-based approaches to medicine. Modern medicine focuses on using clinical trials to demonstrate that a therapy works, but is skeptical about attempts to link treatment effectiveness to the biology underlying a disease.

People can develop PTSD for a number of different reasons, not just in combat. Sexual assault, a traumatic loss, a terrible accident – each might lead to PTSD. The U.S. Department of Veterans Affairs estimates about 13.8 percent of the veterans returning from the wars in Iraq and Afghanistan currently have PTSD. For comparison, a male veteran of those wars is four times more likely to develop PTSD than a man in the civilian population is. PTSD is probably at least partially at the root of an even more alarming statistic: Upwards of 22 veterans commit suicide every day.

Therapies for PTSD today tend to be a mixed bag. Practically speaking, when veterans seek PTSD treatment in the VA system, policy requires they be offered either exposure or cognitive therapy. Exposure therapies are based on the idea that the fear response that gives rise to many of the traumatic symptoms can be dampened through repeated exposures to the traumatic event. Cognitive therapies work on developing personal coping methods and slowly changing unhelpful or destructive thought patterns that are contributing to symptoms (for example, the shame one might feel at not successfully completing a mission or saving a comrade). The most common treatment a veteran will likely receive will include psychopharmaceuticals – especially the class of drugs called SSRIs. 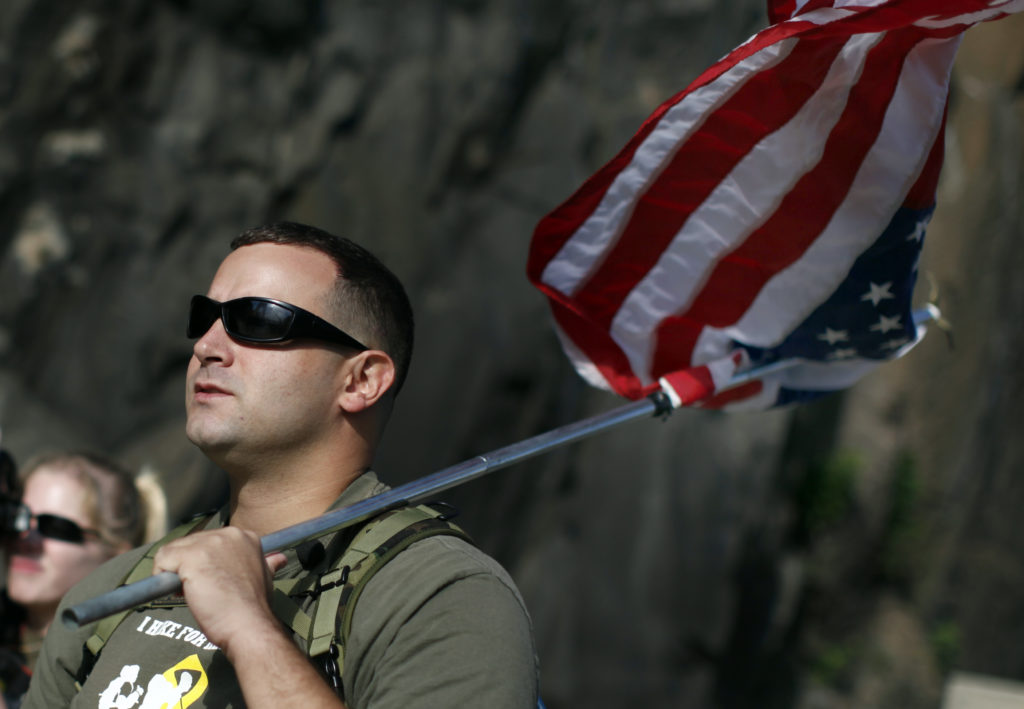 Mindfulness therapies, based on becoming aware of mental states, thoughts and feelings and accepting them rather than trying to fight them or push them away, are another option. There are also more alternative methods being studied such as eye movement desensitization and reprocessing or EMDR therapy, therapies using controlled doses of MDMA (Ecstasy), virtual reality-graded exposure therapy, hypnosis and creative therapies. The military funds a wealth of research on new technologies to address PTSD; these include neurotechnological innovations like transcranial stimulation and neural chips as well as novel drugs.

Several studies have shown that patients improve most when they’ve chosen their own therapy. But even if they narrow their choices to the ones backed by the weight of the National Center for PTSD by using the center’s online Treatment Decision Aid, patients would still find themselves weighing five options, each of which is evidence-based but entails a different psychomedical model of trauma and healing.

This buffet of treatment options lets us set aside our lack of understanding of why people experience trauma and respond to interventions so differently. It also relieves the pressure for psychomedicine to develop a complete model of PTSD. We reframe the problem as a consumer issue instead of a scientific one.

Thus, while WWI was about soldiers and punishing them for their weakness, in the contemporary era, the ideal veteran PTSD patient is a health care consumer who has an obligation to play an active role in figuring out and optimizing his own therapy.

As we stand here with the strange benefit of the hindsight that comes with 100 years of studying combat-related trauma, we must be careful in celebrating our progress. What is still missing is an explanation of why people have different responses to trauma, and why different responses occur in different historical periods. For instance, the paraylsis and amnesia that epitomized WWI shell-shock cases are now so rare that they don’t even appear as symptoms in the DSM entry for PTSD. We still don’t know enough about how soldiers’ own experiences and understandings of PTSD are shaped by the broader social and cultural views of trauma, war and gender. Though we have made incredible strides in the century since World War I, PTSD remains a chameleon, and demands our continued study.

Left: U.S. reinforcements land on Omaha beach during the Normandy D-Day landings near Vierville sur Mer, France, on June 6, 1944 in this handout photo provided by the US National Archives via Reuters.

MaryCatherine McDonald is a assistant professor of philosophy and religious studies at Old Dominion University.

Marisa Brandt is a assistant professor of practice at Michigan State University.

Robyn Bluhm is a associate professor of philosophy at Michigan State University.