ANNAPOLIS, Md. — The historic state capital of Annapolis is draped in grief from a shooting attack on the local newspaper, which killed journalists who chronicled soccer games, art exhibits and the fabric of small-city life.

A sign outside The Annapolis Bookstore, a block from the Maryland State House, starkly expresses the depth of sorrow many are feeling in this quaint waterside capital of about 40,000 near the Chesapeake Bay. “There are no words,” it says. 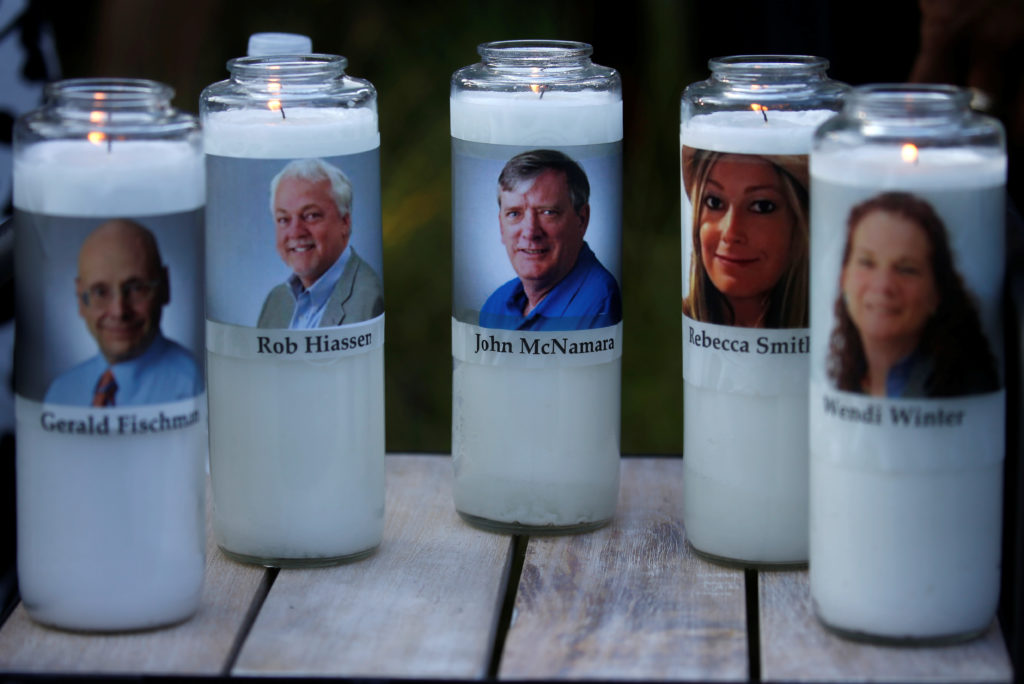 Candles representing the slain journalists of Capital Gazette sit on display during a candlelight vigil held near the Capital Gazette, the day after a gunman killed five people inside the newspaper’s building in Annapolis, Maryland, U.S., June 29, 2018. Photo Leah Millis/Reuters

With its weekly sailboat races and picturesque downtown, residents were settling into summer’s languid rhythms when the shooting shattered the usual tranquility. In a quiet town where the incoming class of the U.S. Naval Academy just arrived this week and residents take pride in a rich colonial legacy, the shooting at The Capital that claimed five lives opens a new chapter in its long history.

“It feels so personal,” said Mary Adams, who owns The Annapolis Bookstore and knew two of the victims. “It has shifted our community, and maybe it’s made us more attuned to the fact that we are all in this together.”

The Rev. M. Dion Thompson, who worked as a journalist at The Baltimore Sun for 15 years, made the sadness a focus of his sermon at St. Anne’s Episcopal Church in Annapolis on Saturday evening. He also highlighted journalism as a force to comfort the afflicted, as he sought to comfort people saddened by the killings. 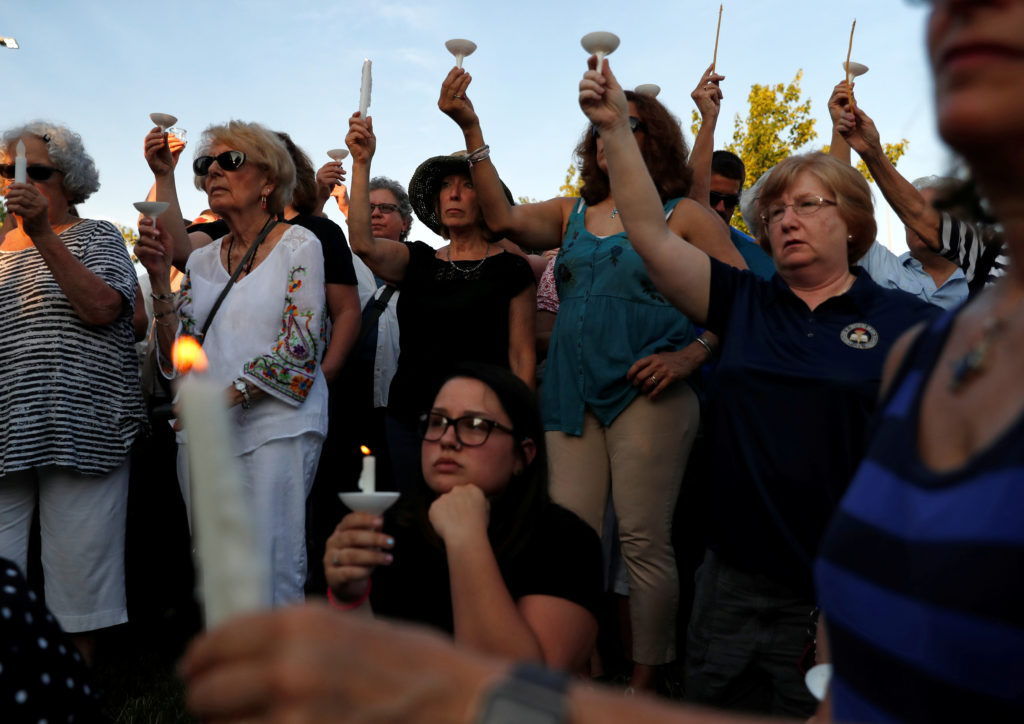 People take part in a candlelight vigil near the Capital Gazette, the day after a gunman killed five people inside the newspaper’s building in Annapolis, Maryland, U.S., June 29, 2018. Photo by Leah Millis/Reuters

“Not that it’s awakened the community, but I think our community now joins so many others in feeling this intense harm that has been done to us,” Thompson said after the service. “The Capital is not a giant newspaper. Annapolis is not a giant town, so people know who we are talking about.”

“I’m just so sad that this happened to … the people and their families,” Adams said. “They’re all good people just trying to support a local newspaper, and now everyone is wondering how could this have happened.” 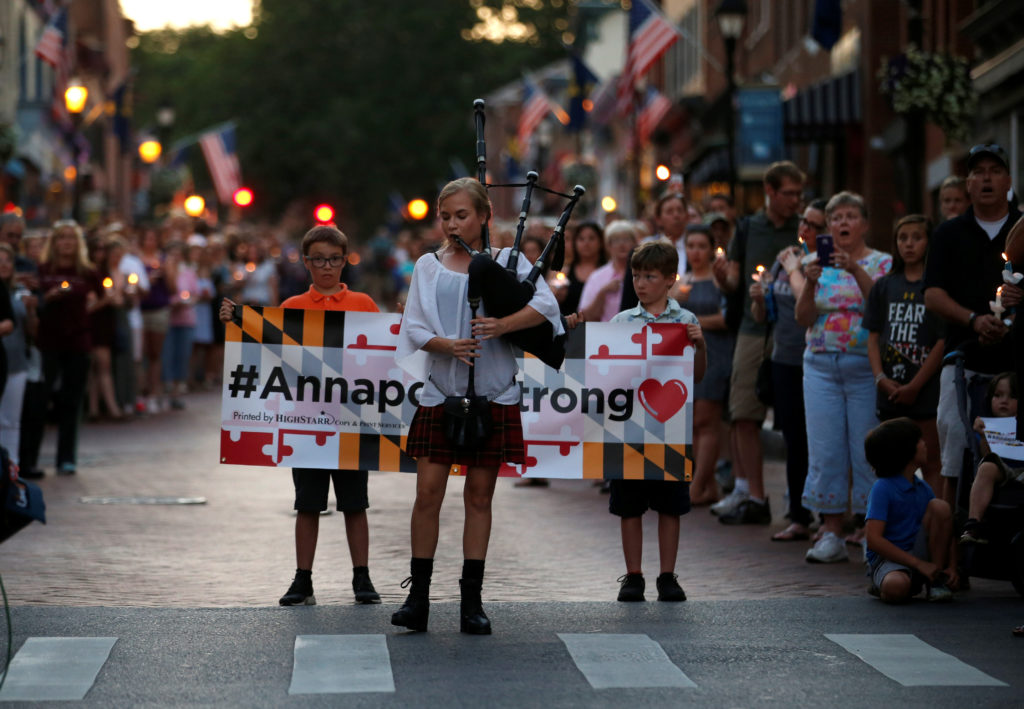 People line the street as a woman plays “Amazing Grace” on a bagpipe during a candlelight vigil in downtown Annapolis to honor the five people who were killed inside the Capital Gazette newspaper the day before in Annapolis, Maryland, U.S. June 29, 2018. Photo by Leah Millis/Reuters

Jarrod W. Ramos has been charged with five counts of first-degree murder. Authorities say he had a longtime grudge against the paper, suing it in 2012 for an article it ran about him pleading guilty to harassing a woman. A judge later threw it out as groundless. In past years, Ramos repeatedly targeted staffers with angry, profanity-laced tweets.

Designed more for an age of horses and buggies than SUVs, Annapolis has a baroque street plan of downtown traffic circles and diagonal streets that can make it feel distant from modern times. For some, that sense of withdrawal made Thursday’s tragedy all the more shocking.

Lisa Quina, owner of an interior design studio called Barefoot Dwelling, recently moved from Baltimore — a city struggling for years to lower a high homicide rate — in search of a smaller, safer community.

One of the considerations for choosing Annapolis was its close-knit nature.

“I guess it’s a wakeup call in any community,” Quina said. “Despite how quaint or how historic, how uncomplicated some of our day-to-day challenges are, we are vulnerable to the worst possible scenario.” 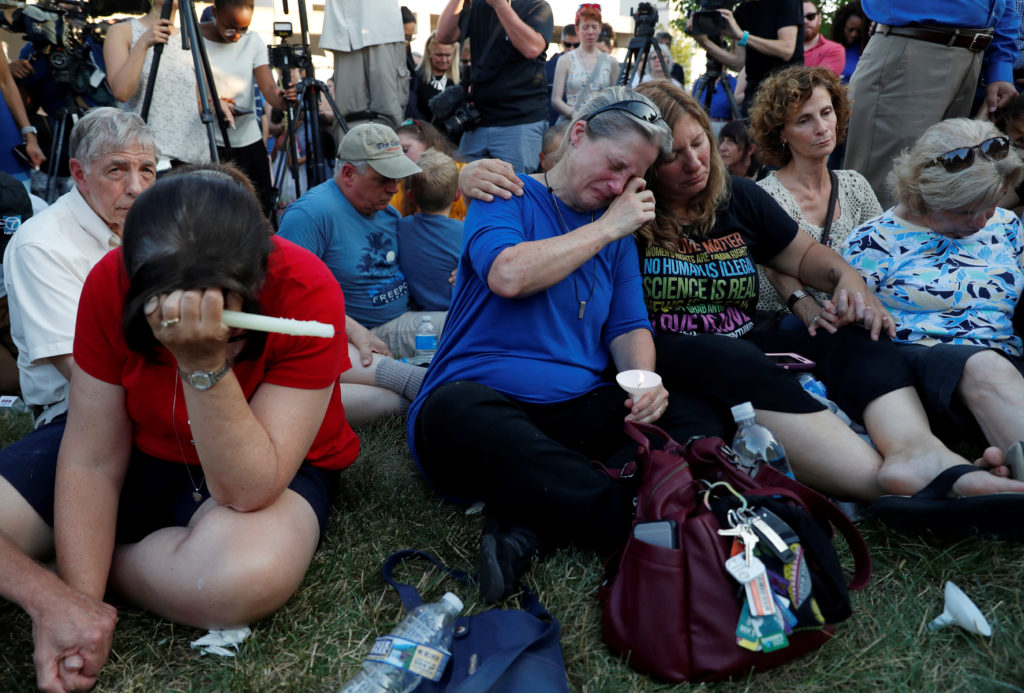 Community members Carol Geithner, center left, and Yasemine Jamison take part in a candlelight vigil with Una Cooper, (L) and others near the Capital Gazette, the day after a gunman killed five people inside the newspaper’s building in Annapolis, Maryland, U.S., June 29, 2018. Photo by Leah Millis/Reuters

Caitlin Walls, who works as an assistant interior designer at the shop, said Annapolis has always felt to her like a safe place to be. “It’s sad it’s such a growing reality in places that you thought were the safer places,” Walls said of the shooting.

And for some raised in Annapolis, like New England Patriots coach Bill Belichick, the tragedy hits hard even after they’ve gone elsewhere. Born in Tennessee, Belichick graduated from Annapolis High in 1970 and has strong ties from when his father was an assistant coach at Navy. 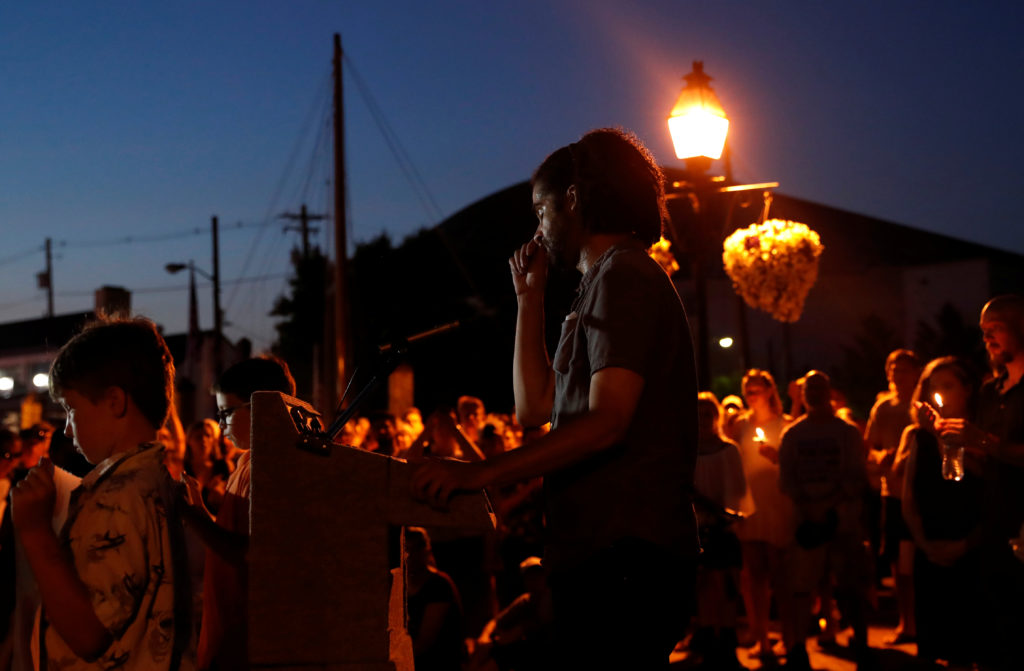 Capital Gazette staffer Phil Davis says a few words during a candlelight vigil in downtown Annapolis to honor the five people who were killed inside the Capital Gazette newspaper the day before in Annapolis, Maryland, U.S. June 29, 2018. Photo by Leah Millis/Reuters

“For my entire life, The Capital has been my hometown newspaper. My family and I have enjoyed special relationships with many great people who have worked for the newspaper,” Belichick said. “My heart goes out to the victims, their families and the entire Annapolis community.”

Steve Samaras, who owns Zachary’s Jewelers on Main Street near the City Dock, said he attended a vigil Friday night with his 12-year-old niece. He said she already was grappling with consequences of gun violence, because a friend of hers who had moved to Florida had attended Marjory Stone Douglas High School in Parkland, where 17 people died in a shooting in February.

More than 1,000 people streamed through Annapolis on Friday evening to remember the victims.

Samaras has experienced the resilient side of Annapolis first hand. In 2005, the building that housed his business was destroyed by a fire, and he had to relocate. Seven days later, he said, the community made sure he was open at his present location.

“So, the resilience, the determination that they showed me, that’s what we’re going to see happen here,” he said.