Five people were shot dead Thursday in what authorities described as a “targeted attack” at an Annapolis, Maryland, newsroom.

Two people also sustained superficial wounds in the shooting, police said, presumably not from gunfire. The suspect, later identified as a white male, is in custody. He was charged with five counts of first-degree murder Friday, court documents showed.

“This person was prepared to shoot people,” William Krampf, deputy police chief of Anne Arundel County, told reporters in a briefing hours after the shooting, adding that the gunman had a grudge against the Capital Gazette newspaper staff. “His intent was to cause harm,” Krampf added.

Annapolis, Maryland, officials held a final news briefing on the Capital Gazette shooting Friday. Watch their remarks in the player above.

A preliminary motive started to emerge later Thursday when The Baltimore Sun reported that the gunman had lost a years-long defamation case against the newspaper that was initially filed in 2012.

The deputy police chief said the suspect “looked for his victims.” However, authorities have yet to officially confirm the motive.

Here’s what we know about Thursday’s shooting in Maryland’s capital. 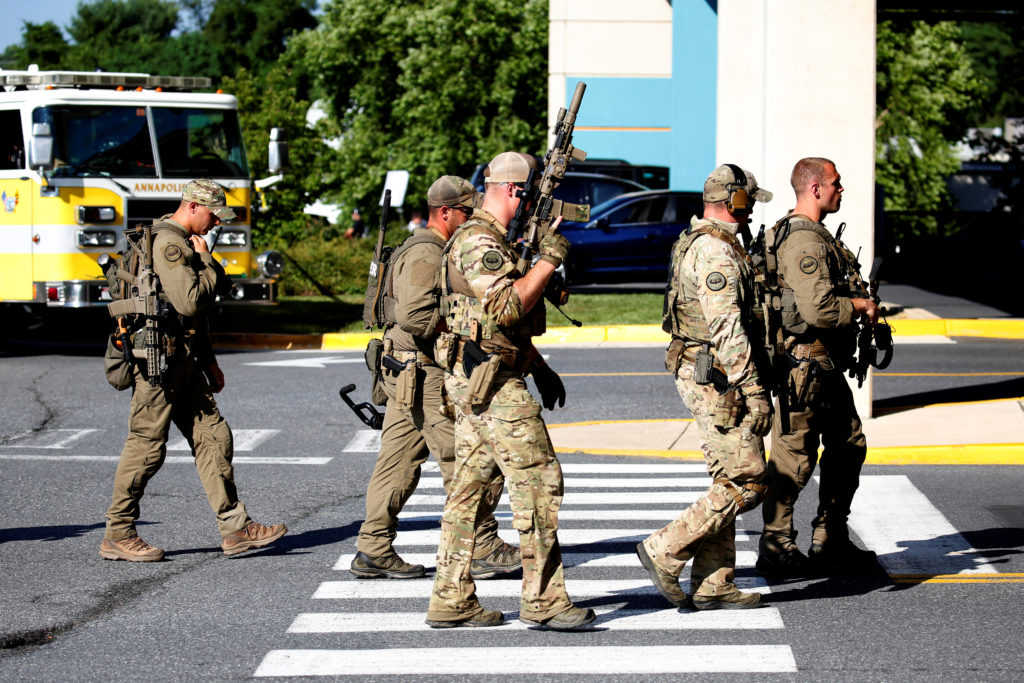 Around 2:40 p.m. EDT Thursday, police received reports of an “active shooter,” which was later confirmed on their official Twitter account. Although authorities have yet to give a more detailed breakdown on how the shooting unfolded, Krampf said the gunman used detonated smoke grenades when he entered the first floor of the building.

Police said the suspect, later identified as a man in his 30s, was armed with a “long gun.” Police later specified that a pump-action shotgun was used in the shooting. Krampf did say that “general threats” had been made against the newspaper, but stopped short of directly connecting them to the suspect. “They indicated violence,” he said.

Later, Police Chief Timothy Altomare said the suspect made threats over social media against the paper in 2013. The paper didn’t press charges for the incident.

Altomare also said that reports of the suspect mutilating his fingertips were “absolutely untrue.” Police has said the suspect was uncooperative, following his arrest.

One of the first signs of the shooting came from the Twitter account of Anthony Messenger, an intern at the newspaper. The tweet read, “Active shooter 888 Bestgate please help us.” The Gazette, among several other tenants, are housed in a building at that location.

Messenger told NBC’s “TODAY” show that the tweet wasn’t sent out by him; he had given his phone to another journalist while they were hiding under a desk in the far corner of the office.

“In that moment, I thought I was going to die, I thought we were going to die” Messenger said. He had managed to call the police a couple of times and send a text to a friend. His colleague then used his phone to tweet out the call for help.

Prosecutor Wes Adams told reporters Friday that the gunman had barricaded one of the two entrances to the office, preventing staff members from escaping.

Shortly after the shooting, Gazette crime reporter Phil Davis said in a series of tweets that the gunman shot through a glass door and opened fire on multiple people.

“There is nothing more terrifying than hearing multiple people get shot while you’re under your desk and then hear the gunman reload,” he tweeted.

In another interview on the Capital Gazette’s website, Davis said the shooting in the newsroom “was like a war zone.”

“I’m a police reporter. I write about this stuff — not necessarily to this extent, but shootings and death — all the time,” he said. “But as much as I’m going to try to articulate how traumatizing it is to be hiding under your desk, you don’t know until you’re there and you feel helpless,” he said.

Davis also said he and others were hiding under their desks when the gunman stopped shooting. Soon after, police entered the building to arrest the attacker. 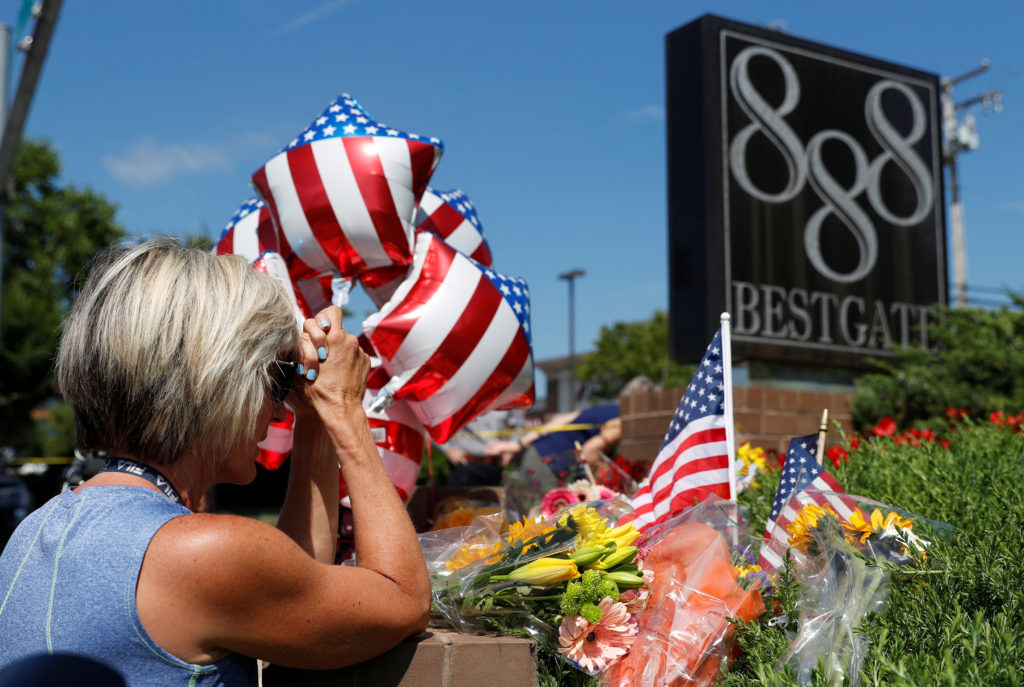 Kim Wither says a prayer at an impromptu memorial outside of the Capital Gazette, the day after a gunman killed five people inside the newspaper’s building in Annapolis, Maryland. Photo by Leah Millis/Reuters

Officials released the names of the five victims Thursday evening, most of them Gazette journalists. The Sun and the Gazette published obituaries for each of them.

The two injured Gazette employees, Rachael Pacella and Janel Cooley, have since been treated and released.

A fellow journalist set up a GoFundMe page for the Gazette. To date, the account has raised more than $50,000 since the shooting.

“Our hearts break for our colleagues in Annapolis,” the page says, adding that this was an effort to help the newsroom with medical bills, funeral costs, newsroom repairs, “any other unforeseen expenses that might arise as a result of this terrible shooting.”

Gazette journalists reported on the shooting in their own newsroom, during and after the incident, and worked with The Sun staff to update their own website. Hours after the shooting, the staff vowed to continue working.

Photojournalist Joshua McKerrow promised a “Capital Friday,” while reporter Chase Cook said on Twitter, “I can tell you this: We are putting out a damn paper tomorrow.”

I can tell you this: We are putting out a damn paper tomorrow.

The Gazette’s morning edition went out Friday with the headline, “5 Shot Dead at The Capital.” Pictures of all five of the staff’s slain colleagues are on the front page.

A sign of defiance and resiliency this morning. The staff at the Capital Gazette in Annapolis has published a morning edition of its paper. The headline: 5 Shot Dead at The Capital with pictures of the victims, their own colleagues. We are LIVE this morning in Annapolis @ABC7GMW pic.twitter.com/hwbMEKi28t

Following the shooting, editor Jimmy DeButts said on Twitter that he was “devastated and heartbroken.”

Devastated & heartbroken. Numb. Please stop asking for information/interviews. I’m in no position to speak, just know @capgaznews reporters & editors give all they have every day. There are no 40 hour weeks, no big paydays – just a passion for telling stories from our communty.

“There are no 40-hour weeks, no big paydays — just a passion for telling stories from our community,” he added. 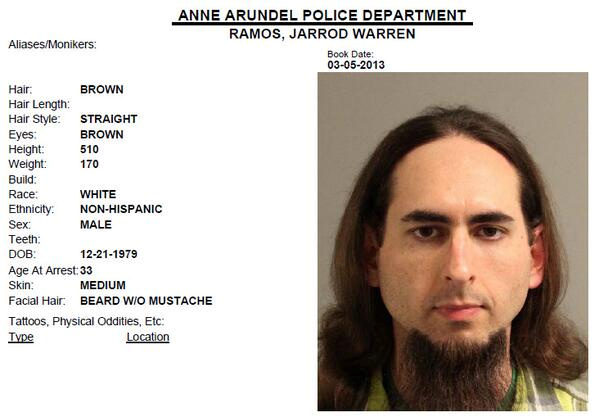 Authorities arrived at an address in Laurel, Maryland, connected to Ramos, the newspaper reported, adding that the suspect had a long-standing fued with the paper that stemmed from 2011. Then, columnist Eric Hartley wrote about a criminal harassment case against Ramos, who filed a defamation lawsuit against the writer, editor and publisher Thomas Marquardt the following year. Years later, the case ended when the court ruled in the Gazette’s favor.

Neither man is still employed by the Gazette, The Sun reported, nor did they witness the shooting. 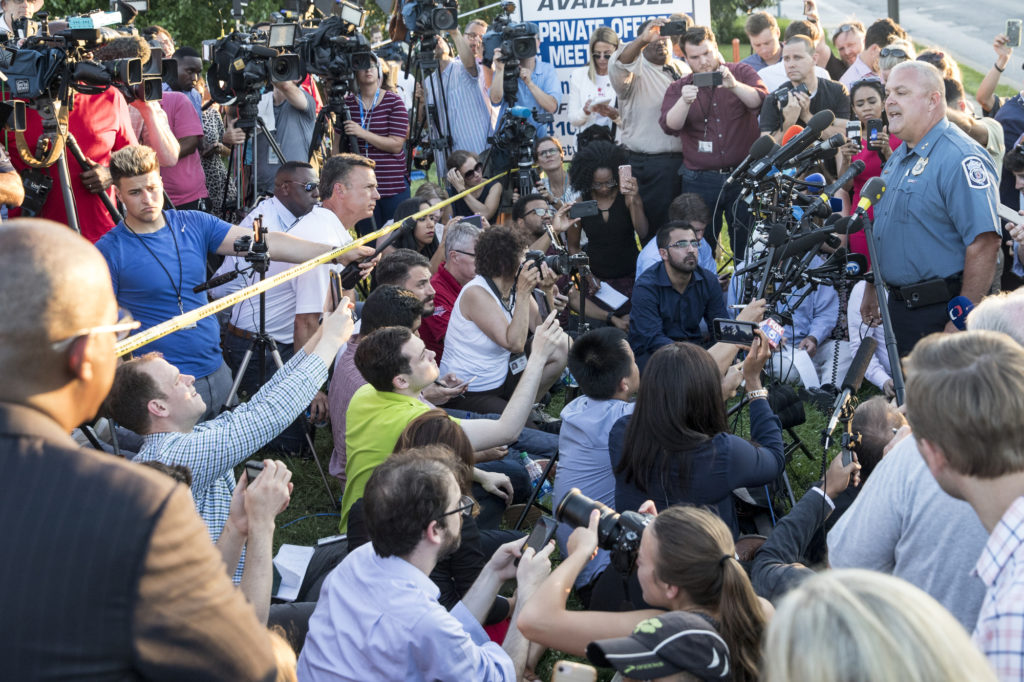 Maryland Gov. Larry Hogan said on Twitter that he was “absolutely devastated” to hear about the shooting.

President Donald Trump said he was briefed on the Maryland shooting late Thursday. “My thoughts and prayers are with the victims and their families. Thank you to all of the First Responders who are currently on the scene,” he wrote.

White House press secretary Sarah Sanders also responding to the shooting in a tweet, saying, “Strongly condemn the evil act of senseless violence in Annapolis, MD. A violent attack on innocent journalists doing their job is an attack on every American. Our prayers are with the victims and their friends and families.”

Strongly condemn the evil act of senseless violence in Annapolis, MD. A violent attack on innocent journalists doing their job is an attack on every American. Our prayers are with the victims and their friends and families.

Speaking with CNN, Gazette reporter Selene San Felice said, “I’m going to need more than a couple days of news coverage and some thoughts and prayers, because it’s our whole lives have been shattered. And so thanks for your prayers, but I couldn’t give a f**k about them if there’s nothing else.”

Capital Gazette reporter on CNN: "I'm going to need more than a couple days of news coverage and some thoughts and prayers, because it's our whole lives have been shattered. And so thanks for your prayers, but I couldn't give a fuck about them if there's nothing else." pic.twitter.com/rbjxtV1UbH

Ramos appeared in a Maryland courtroom via video feed for his bond hearing Friday morning. He was denied bail. Judge Thomas Pryal said Ramos likely posed a danger and ordered for him to be detained. He is being represented by a public defender.

The City of Annapolis announced on Facebook that a vigil will be held at 8 p.m. EDT tonight at a public square near the Capitol. Then, there will be a march to City Dock for a service by the water.

READ MORE: 5 important stories that have nothing to do with the civility debate

Left: Steve Schuh, the County Executive of Anne Arundel County, Maryland, holds a copy of the Capital Gazette as he is interviewed the day after a gunman killed five people and injured two others at the newspaper's offices, in Annapolis, Maryland. Photo by Joshua Roberts/Reuters