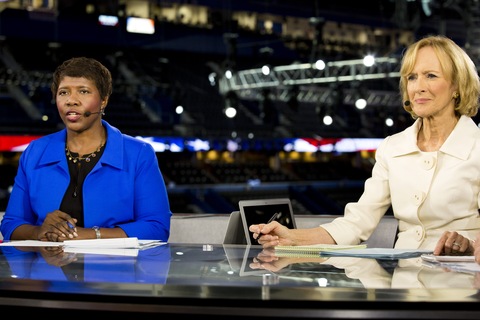 Gwen Ifill, left, and Judy Woodruff co-anchored all PBS NewsHour’s special election coverage during the 2012 season. The veteran correspondents will expand their roles for the NewsHour and Ifill will continue her role as the host of the weekly news program Washington Week. Photo by PBS NewsHour

On Tuesday, Paula Kerger, president and CEO of PBS, announced that Gwen Ifill and Judy Woodruff have been named co-anchors of the PBS NewsHour. The veteran correspondents were also named managing editors of the weekly news program. Kerger made the announcement at the Television Critics Association Press Tour in Los Angeles.

The news comes about a month after the announcement of the launch of the PBS NewsHour Weekend, which is set to begin airing Sept. 7.

Read the press release below for more details:

Los Angeles, Calif. — Aug. 6, 2013 — Today at the Television Critics Association Press Tour, it was announced that Gwen Ifill and Judy Woodruff will be co-anchors and managing editors for the PBS NEWSHOUR. Ifill and Woodruff will anchor the broadcast together Monday through Thursday each week. On Fridays, Woodruff will anchor solo as Ifill hosts WASHINGTON WEEK that evening. This will mark the first time a network broadcast has had a female co-anchor team.

It was also announced that Hari Sreenivasan will serve as Senior Correspondent for the PBS NEWSHOUR with Gwen Ifill and Judy Woodruff, reporting several times a week from WNET’s Tisch Studios in New York, along with his duties anchoring PBS NEWSHOUR WEEKEND Saturdays and Sundays beginning September 7.

“This marks an exciting new chapter in the history of PBS NEWSHOUR,” said Linda Winslow, executive producer for PBS NEWSHOUR. “Gwen and Judy have been the heart and soul of NEWSHOUR for years, so it’s wonderful to formalize these new roles and give them an opportunity to provide even more input on the content and direction of the show. It’s also great to have talented correspondents like Jeff, Ray, Hari and Margaret available to help us get out in the field to explore topics that point up their in-depth knowledge of the subjects they’ll be covering.”

“I am so pleased to be taking on this new role alongside my colleague and dear friend Judy Woodruff,” Ifill said. “We’ve successfully worked side-by-side for many years covering conventions, elections and countless other news events. We make a great team.”

“Gwen and I love working together and appreciate the trust viewers put in the PBS NEWSHOUR, both on TV and online,” said Woodruff. “Working with Linda and this entire terrific team, we’ll do our best to make sure the next chapter for the NEWSHOUR upholds its reputation for excellence, independence and integrity.”

“We are so pleased about these new roles for Gwen, Judy and the NEWSHOUR team,” said Beth Hoppe, PBS Chief Programming Executive and General Manager, General Audience Programming. “Together with the weekend edition from New York, PBS NEWSHOUR is solidly positioned to continue its long track record of providing context, in-depth reporting and analysis as one of the most important programs in public broadcasting.”

This announcement follows the recent announcement of PBS NEWSHOUR WEEKEND, which will feature a summary of the day’s national and international news, using renowned experts to offer analysis. Each weekend broadcast will contain original, in-depth field reporting on topics including education, healthcare, the economy, energy, science and technology, religion, finance and the arts. PBS NEWSHOUR correspondent Hari Sreenivasan will anchor PBS NEWSHOUR WEEKEND every Saturday and Sunday from the Tisch WNET Studios at Lincoln Center.

These changes will go into effect in September.