It’s easy to get outraged about the obvious. Barbie on the cover of Sports Illustrated? Really? Darkening O.J. Simpson’s features to make him seem more sinister? Ridiculous. But they both happened.

I once worked for a newspaper where editors thought nothing of slapping a feature photo on Page One that depicted young black children (in the back of a wagon, as I recall it) happily munching on watermelon. They were baffled at my objection.

But day after day, we are exposed to sneakier outrages – images that reinforce stereotypes and suppress ambition, especially in young women.

I had the chance to talk to Facebook Chief Operating Officer Sheryl Sandberg about that this week at the Makers Conference in California.

Sandberg, whose book about women’s empowerment, “Lean In: Women, Work and the Will To Lead,” has sold 1.5 million copies, noticed the image problem too. “Leadership looks white and looks male to most people, because that’s what history has taught us,” she told me.

Stock photos of women used to illustrate advertising campaigns as well as news stories invariably show them submissive, half-naked or harried. Where were the confident, powerful, aspirational images we could show our daughters?

Sandberg’s LeanIn.Org, the nonprofit she launched to pick up where her book left off, set out to change the formula by partnering with Getty Images, the photo agency that is the source of 150 million stock images for 2.4 million subscribers around the world. By creating the Lean In collection of more than 2,500 images to begin with, clients are one click away from a more diverse and complete representation of who women are today. Check it out.

The most remarkable part of this project for me is that it addresses a problem that I had not previously given much thought to. That’s what makes it insidious. One gender researcher told Sandberg that she once searched the web for women plumbers, and what popped up were women in lingerie holding wrenches.

“Let’s give people images that enforce the right stereotypes, and stop reinforcing the wrong ones,” Sandberg said. 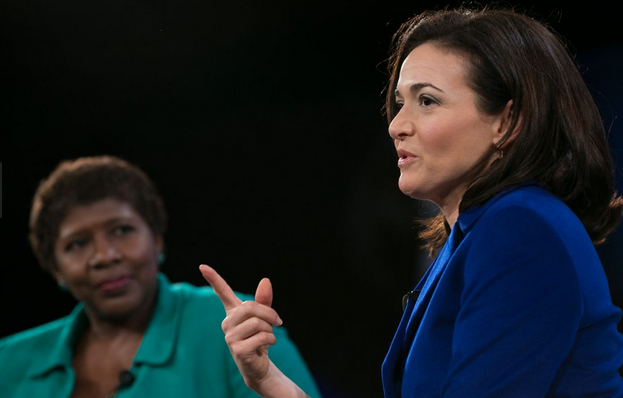 Sheryl Sandberg talks with Gwen Ifill about the journey since her best-selling book “Lean In” was released. Photo by Makers Conference

So instead of seeing only the nurturing, the sexy or the supportive (and there is nothing wrong with any of that), we also see girls with robots, older women in charge in business settings, fathers with children.

It’s way past the time to change the definitions and the stereotypes too. And, by the way, let’s set politics aside. There’s a reason Sarah Palin quoted Hillary Clinton when she talked about cracking the glass ceiling in 2008. They both saw their campaigns sucked into the stereotypical rabbit hole.

Expanding the ways we see ourselves to reflect reality can only help us all.