Gwen’s Take: Who We Are and How We Vote – Connecting the Dots 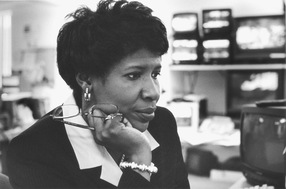 Paul Taylor, the executive vice president of the Pew Research Center, has long experience explaining why things happen. When we chatted on the PBS NewsHour this week, the subject was the widening chasm of economic segregation.

At first blush, this seems obvious. Isn’t that the way it’s always worked? Well, no. And there is a price to be paid for that growing social isolation.

At the end of our conversation, Taylor, who in a former life was one of the nation’s top political reporters, closed that loop. By living in a divided world, he said, many Americans know and care less about each other. They’re not even curious.

As we watch the chasm grow wider, we have to start looking at our differences differently. Segregation is no longer solely about race. Migration is about retirement destination and upward mobility as much as it is about crossing U.S. borders. We are all on the hunt for new definitions as well as on the lookout for new wedge issues.

On the day we chatted, people who live in one silo were at war with folks who live in another – over chicken sandwiches, of all things. Thanks to gay marriage advocates on the left and conservatives on the right, a statement of personal belief by a fried chicken entrepreneur morphed into another skirmish in the culture wars.

This tone of instant insult leaks over into the presidential campaign on a daily basis. It is no longer enough for one side to question another’s policy. Each now steps right up to the edge of accusing the other of breaking the law. And it’s not enough for one side to explain why the other shouldn’t win. Any effort to try is now denounced as a “pipe dream.”

And no, I am not making that up. Both charges were uttered within hours of one another Thursday on conference calls by Democratic and Republican campaign officials.

The standard bearers – President Obama and Gov. Romney – decry all this. Each accuses the other of shrinking the debate or of taking statements out of context. Chances are the charges and countercharges cancel each other out.

But they may have an unintended, unfortunate fallout. These arguments could make voters throw up their hands and force Americans indoors and away from each other. And then we all stop listening.

It’s early. It’s August. Once the Olympics are over, the party conventions begin and voters will start paying attention. It would be nice if, when that happens, they have something ennobling to listen to.

WATCH: Restaurants in much of New York get green light for outdoor dining

Rubber bullets are supposed to be ‘less than lethal,’ but they can still kill or maim