Nearly two and a half years after she moved to the U.S., Kriti learned that she may no longer be allowed to work.

Now a software engineer in Seattle, Kriti — who requested that her name be changed out of concern for her job — had worked at a software giant in Bengaluru, India’s tech capital before she got married and relocated to the U.S. in 2015. That year, she became one of thousands of immigrants who could work for the first time under an Obama-era rule that allowed some people on H4 visas to be employed.

Last December, the Trump administration proposed rescinding that rule, and in February, citing the need for “new economic analysis,” the Department of Homeland Security stated in a court filing that it anticipated publishing a new rule in June. Now, as July begins with no update, thousands of people — many of whom are Indian women — remain in limbo. 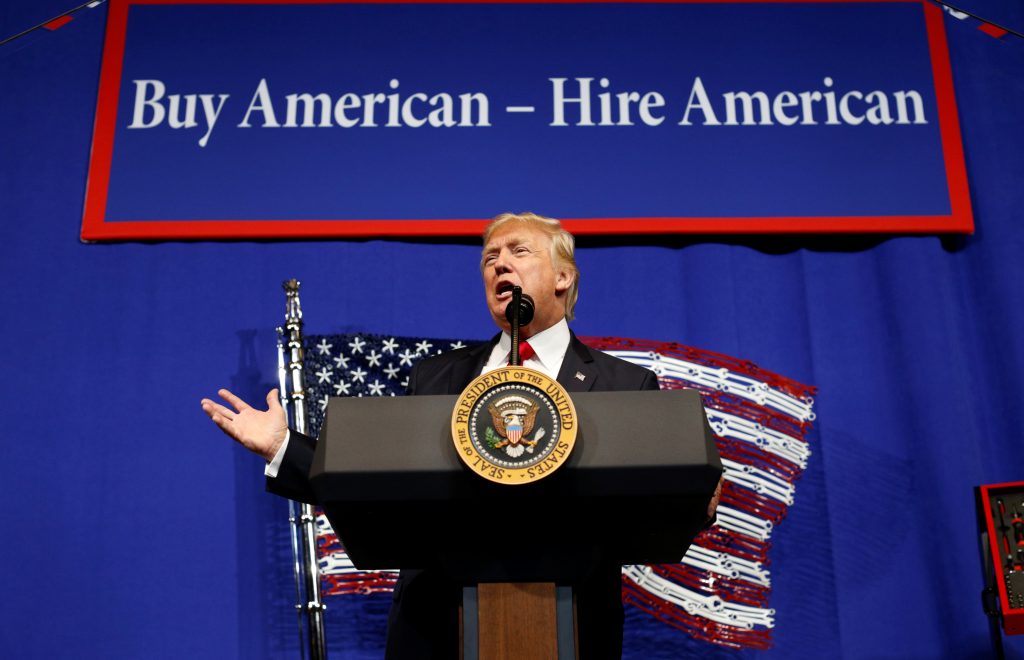 U.S. President Donald Trump speaks before signing an executive order directing federal agencies to recommend changes to a temporary visa program used to bring foreign workers to the United States to fill high-skilled jobs during a visit to the world headquarters of Snap-On Inc, a tool manufacturer in Kenosha, Wisconsin, on April 18, 2017. Photo by Kevin Lamarque/Reuters

Given to spouses of people with an H-1B visa, a nonimmigrant visa for foreign workers, the H4 visa allows people to live but not work in the U.S. This changed under the Obama administration in May 2015, when H4 visa holders became eligible for an EAD, or employment authorization, after their spouse’s petition for permanent residence or green card had been approved. (That approval is only the second step in the long process to get the final green card.)

The H4 EAD had come as a relief to all those who had applied for a green card, but in the meantime remained stuck in a years-long backlog — one that disproportionately affects Indian citizens.

Indians accounted for more than 75 percent of all H-1B visas in fiscal year 2017, but are allotted a maximum of seven percent of all green cards annually. This has resulted in a long wait for green cards among Indian citizens — and means that a large number of H-1B spouses, mostly women, depend on the H4 EAD to work. China and the Philippines are also disproportionately impacted.

From fiscal years 2015 to 2017, USCIS approved more than 104,000 H4 EADs. Now, with their future uncertain, “the environment at home is tense,” Kriti said. “There’s nothing [else] I talk about. I can’t concentrate on anything… This is the only thing on my mind. If I am watching the news, I am just waiting for something on H4 EAD, if I am searching online, it’s about H4 EAD … My entire life is revolving around this.”

Kriti had an arranged marriage and said that she only tied the knot after she was assured that she could apply for work authorization after she moved. While the withdrawal of her H4 EAD would bear a significant economic cost — including putting her mortgage at risk — she said the uncertainty has also had a huge emotional impact on her, especially since her family back in India has been pressuring her to have children.

“Life is so uncertain right now I don’t know what’s going to happen tomorrow,” she said. “If I am not able to work, I don’t want to stay here anymore.”

Kriti eventually found solace in “SaveH4EAD,” a Facebook group she joined in January. With nearly 6,400 members in 22 states, the group has been raising awareness and advocating for H4 EAD holders. 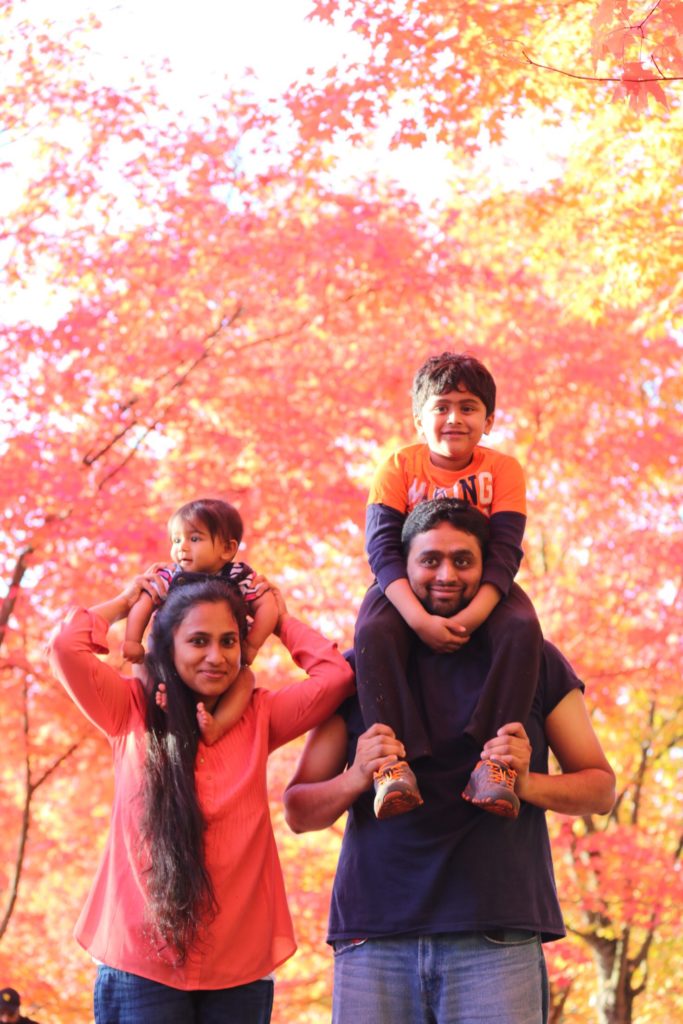 Priya Chandrasekaran, a leader of the advocacy in Washington state, said that the group has met lawmakers of both parties as well as tech giants like Microsoft, Facebook and Amazon.

Now a Seattle-based staff accountant, she had been unable to work for five years after moving to the U.S. in 2010. She said that throwing herself into advocacy has helped her emotionally as well.

“[I] felt like there were other people in the same boat. I feel very motivated and energetic when I get up and see my WhatsApp and my messages and see the girls saying, alright, what are we going to do today?” she said. “You feel like you’re not just working for yourself, but for a whole bunch of women.”

According to a survey conducted by the group of H4 EAD holders in California, nearly 60 percent of its 2,411 responders have professional or graduate degrees, 43 percent bought homes after receiving their EAD and 49 percent have an individual income of more than $75,000.

In a bipartisan effort in May, Rep. Pramila Jayapal (D-WA) and Rep. Mia Love (R-UT) penned a letter signed by 130 members of Congress to Homeland Security Secretary Kirstjen Nielsen, arguing that revoking those work permits would hurt the U.S. economy.

The Information Technology Industry Council, a tech lobby, also sent a letter in support of the work authorization to the U.S. Citizenship and Immigration Services in January.

U.S. Citizenship and Immigration Services told the NewsHour Weekend in an email that it was still reviewing the rule based on President Donald Trump’s April 2017 “Buy American and Hire American” executive order, which lays out policy guidelines that include increased scrutiny and transparency in hiring foreign workers.

“The agency is considering a number of policy and regulatory changes to carry out the President’s Buy American, Hire American Executive Order, including a thorough review of employment based visa programs,” Michael Bars, a USCIS spokesperson, said in a statement to NewsHour Weekend. 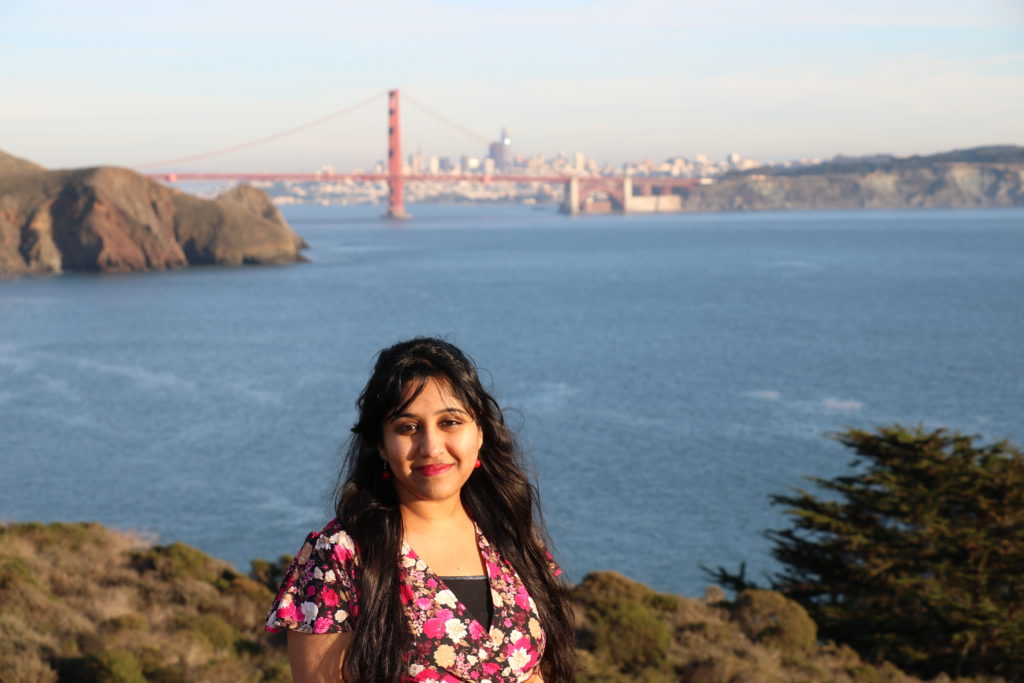 Molika Gupta pursued her masters degree after she moved to the U.S. in 2013. An auto company filed for her H-1B but it wasn’t picked up in the lottery. Photo courtesy of Molika Gupta.

Molika Gupta, a 32-year-old patent licensing professional in Detroit, moved to the U.S. after tying the knot in 2013. She pursued a master’s degree here but her H-1B visa, filed by an auto company in Detroit, was not picked up in the lottery, leaving her without a way to work.

“It was absolutely horrendous,” she said.

She waited for two years before receiving her EAD.

“It was the most dark phase of my personal and professional life … I was not prepared for [going from] attending meetings on Monday morning to making chapattis to watching Netflix on the same Monday mornings,” said Gupta, who also holds a master’s degree in biotechnology. “It was mixed with emotions of depression, loneliness and questions on self-esteem and self-worth, and not being able to accept the fact that this happened to me.”

Today, Gupta is still working to find a full-time job while freelancing in Detroit.

The H4 EAD program has been legally challenged before.

Just before the rule change under Obama took effect, a group called Save Jobs USA, created by former employees of Southern California Edison, filed a case in Washington, D.C., alleging that they had been replaced by H-1B workers. The group’s attorney alleges that the H4 EAD program makes the H-1B visa more attractive, endangering American jobs. “The president has no authority to declare that a class of aliens can work in the United States,” Save Jobs USA attorney John Miano told the NewsHour Weekend.

Rejecting their argument, Shoba Wadhia, a professor of immigration law at Penn State Law, said that the tall task of qualifying and applying for the H-1B visa already checks any potential impact on American jobs. “We’re talking about just a fraction [of H4 visa holders] and that happens to be investing in the American dream,” referring to the green card backlog, which has delayed their eligibility to work in the U.S.

The Save Jobs USA case was dismissed in September 2016, but the group appealed the decision.

Wadhia believes that restricting employment opportunities, especially to those that are highly educated, is detrimental to the U.S. economy.

“Why not give them the opportunity to apply those degrees in a meaningful way that is good for their own well-being and for America?” she said.