What happened to the remnants of the World Trade Center?

They come in various forms and sizes, collected from the wreckage of the World Trade Center buildings in the months following the attacks of Sept. 11, 2001.

Fifteen years later, some of the rusted pieces of twisted steel, tattered emergency vehicles, signs, clothing and other relics, which numbered in the thousands, have been disseminated to all 50 states and to the far reaches of the world. Many of them now stand as memorials to 9/11.

More than 2,600 artifacts collected from the site were housed inside Hangar 17 at John F. Kennedy International Airport in New York, under the purview of the Port Authority of New York & New Jersey.

Under the Port Authority program, which began in 2010 and ended last month, the items were given out to 1,585 fire and police departments, museums, municipalities and organizations in an effort to remember the nearly 3,000 people who died that day.

Most of the requests came from the tri-state area and California, according to the Port Authority. Among the artifacts were 1,944 pieces of steel.

New York (291), New Jersey (271) and California (65) received the largest number of artifacts. At least 10 countries, including China, Russia, England and Canada also received pieces of the World Trade Center or other relics from Ground Zero.

Amy Passiak, who served as an archivist and project manager for the artifact program, spoke to the NewsHour this week about her experiences with the project.

Tell us about your role in this program.

As archivist, I oversaw the cataloging, storage, environmental conditions of the hangar, controlled access to the facility, and coordinated assignments and pickups and shipments of artifacts. Early on in the project, my primary goal was to assess the complete collection of materials as well as quantify the requests. Assessment included a re-inventory of artifacts, sizes, estimated weights, types of materials, photography, display and care recommendations. I also developed and managed an archive that recorded all of this data for easy sorting and tracking.

During this project, I was an employee with Art Preservation Services, under the principal Steven Weintraub, who is a trained object conservator specializing in preventive conservation. This type of conservation assesses conditions — like relative humidity, temperature and light — for better object care and storage to prevent any or further degradation. Weintraub and APS were therefore brought in by Port Authority to initially assess the storage of these artifacts and to oversee the initial preservation efforts on the last beam removed from the World Trade Center site, which was covered with ephemera by emergency personnel. 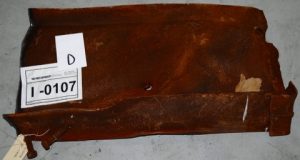 This piece of steel labeled item 0107d was given to the U.S. Embassy in Berlin as part of the Port Authority’s “cutting” program. Photo By PANYNJ Staff

In 2009, when the Port Authority decided to begin the give-away program in earnest, Weintraub then realized they needed a collections-trained staff member to oversee the assessment and sorting of the artifacts for better and more efficient distribution. I was working at the National September 11 Memorial & Museum at the time in collections and was recruited.

Throughout the project, I assessed requests in order to best match up the appropriate size, weight and material. Some groups were requesting large artifacts to display outside, others were requesting small artifacts to display inside an interior case. In order to fulfill more requests, we instituted a “cutting” program, where larger steel beams were cut into smaller sections. This allowed us to fulfill requests under 150 lbs that could be shipped to groups who could not logistically make the trip to New York City. Anything larger had to be picked up from our facility, and in the later years of the project, I coordinated these pickups and facilitated on site. 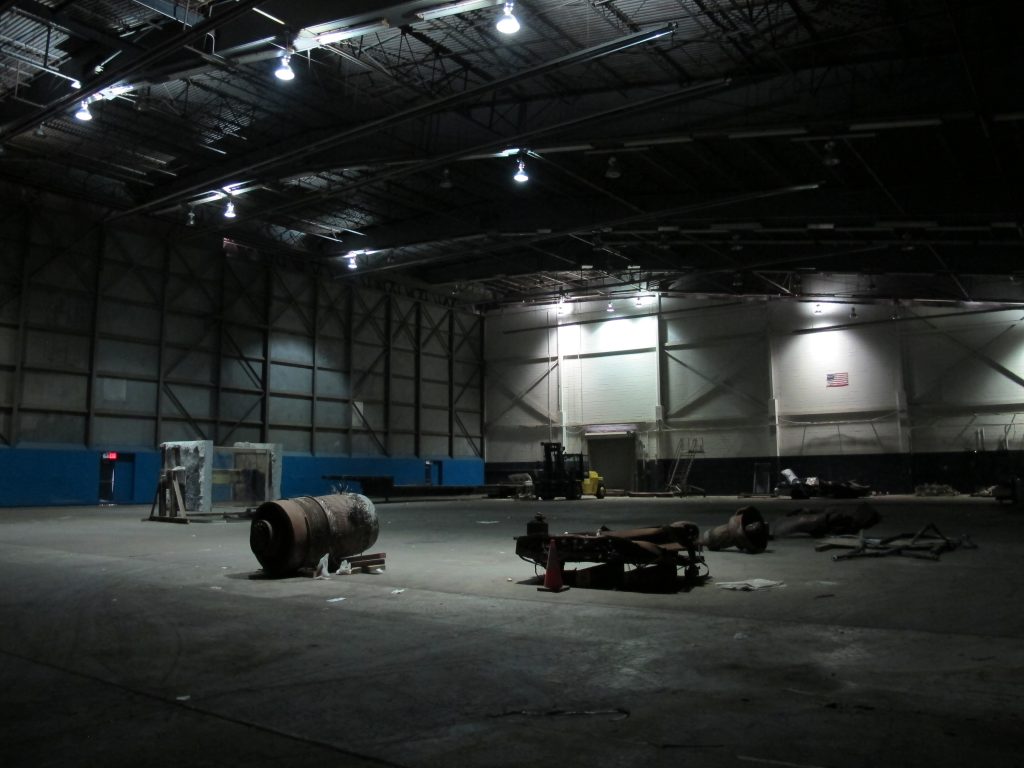 A scene of a mostly empty Hangar 17 with just a few of the remaining remnants including elevator motors, an elevator cab and a portion of the World Trade Center parking structure. Photo by Amy Passiak

Where were the artifacts before the program began in 2010?

A few artifacts were distributed in 2008 and 2009, including to the Newseum and New York State Museum. The organization that is now the National September 11 Museum was also assessing potential artifacts for their collection during this time.

Previous to this time, the artifacts sat in storage at Hangar 17. Until legally released, they were technically still part of evidence for September 11 according to the FBI. Legal orders listing all artifacts were issued in 2009 and 2010 in order to fulfill the give-away program. 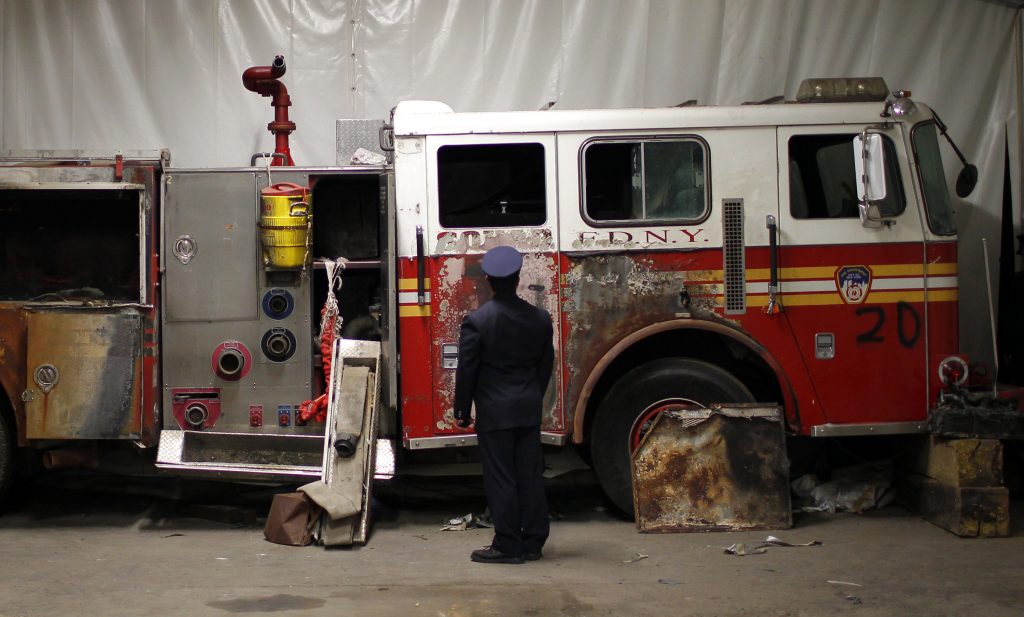 What was the application process, and how did the Port Authority decide who would get the artifacts?

The application process was originally handled by the Port Authority marketing department and then taken over by the department of Government and Community Relations in early 2014.

A formal request letter had to be addressed to the Port Authority executive director and sent to these departments for review. The requesting groups had to be a non-profit or government agency who would display the requested artifacts as part of a memorial accessible by the public. The idea of memorial is somewhat fluid, as some of the requesting groups were museums who were either creating new exhibitions featuring the artifacts, or incorporating into already existing exhibits.

It was also stipulated that the pieces must preserve the integrity of the artifact, meaning they could not be drastically altered. The artifacts could also not be given away to another organization in either piece or whole, without permission by the Port Authority.

Additionally, the Port Authority requested that the following acknowledgement, or something similar, be included in the memorial: 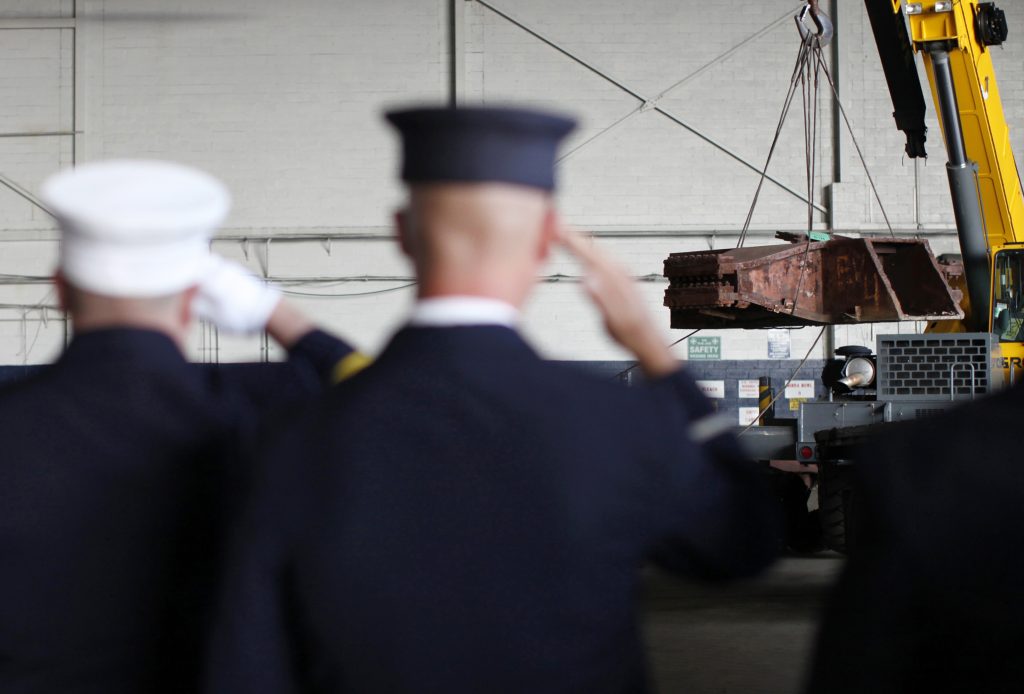 What kinds of displays or memorials were created as a result of the program?

There is every type of memorial, from small to large. The smallest pieces were about 6 inches and largest up to 36 feet in length. There is actually a page online where organizations can self-register their memorials.

Not all of these have pieces incorporated from the artifact program. You can search this by location and also search if it includes World Trade Center steel.

Some of the first memorials built with steel or artifacts from this project include the USS New York, the Newseum, the First Responders Park in Hilliard (Ohio), Westerville Firefighters memorial in Ohio, Mendon Fire Department memorial in Massachusetts, Keane Foundation memorial in Connecticut and the Glens Falls memorial in New York. 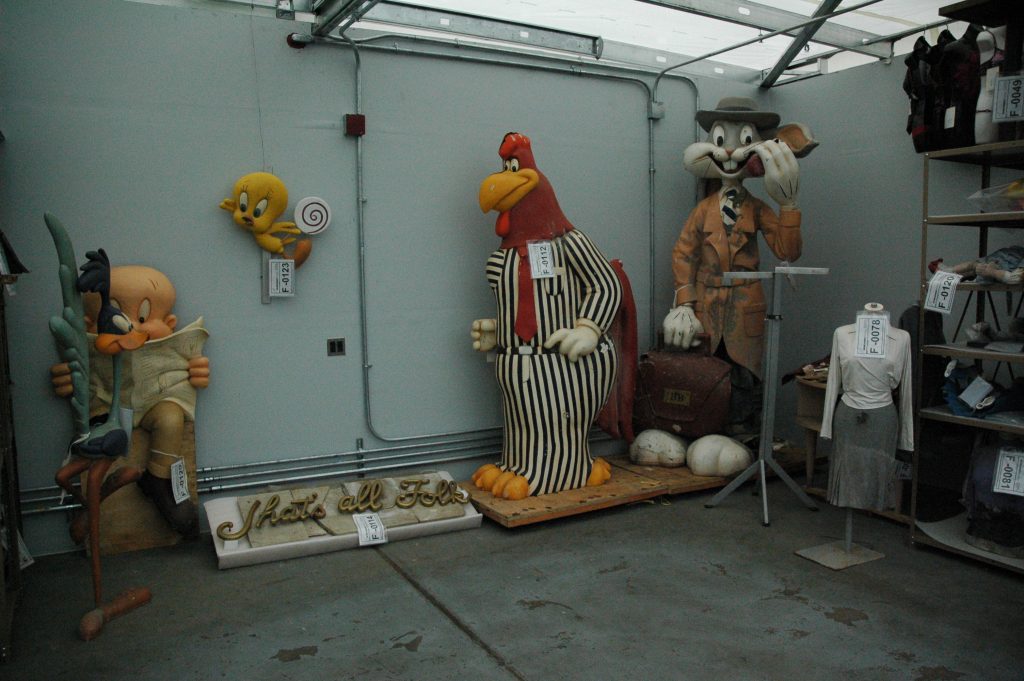 Warner Bros. items shown in 2008 inside Hangar 17 that were collected from the ruins of the concourse level at the World Trade Center mall. Photo By Peter Gat

What were some of the most memorable moments of the program?

Most of my memorable moments involve interacting with and meeting individuals who were requesting or picking up steel. I have worked with anyone from a Boy Scout from Berwick, Pennslyvania, building a 9/11 memorial as part of his Eagle Scout project, to meeting the art students at Fulton-Montgomery Community College who were going to design their 9/11 memorial with a large piece of the antenna to helping retirees at the Sons of American Legion Post 419  to working with staff and students at Cracker Trail Elementary in Florida. The list goes on and on.

I also found it fascinating to see the fire engines that were going to the National September 11 Memorial & Museum be prepped for transport at the hangar. They had to be lowered into the museum through an opening. Cradles were built and secured around the engines so that they could be lifted and lowered on end into the site.

One time we were visited at the hangar by Richard Riley, a union worker who had helped to install and maintain the broadcasting equipment in the antenna. He passed away in 2011.

I was also able to witness several moving ceremonies during pickup. Some emergency services groups picking up were accompanied by members of their organization and performed an honor ceremony while their piece was loaded and upon exiting the hangar grounds. One of the more recent ones was Huntington Manor Volunteer Fire Department, who brought along a piper.

A fascinating aspect during pickups, was the bonding of attending organizations. We would generally try to schedule between five to 20 groups, and these would be conducted during a specified time slot on first-come basis. Several groups would arrive at the same time and, while waiting for their turn to load, would exchange information and stories. Although from different states or type of organizations, these groups were always so grateful to meet each other and exchange information for future contact and updates. Sometimes, I would even witness shared connections between seemingly very different organizations.

An old family friend is a volunteer at the West Chester Railroad in West Chester, Pennsylvania. This is a historical railroad site. His organization had requested a portion of the PATH train rail from our project and was approved. I was then able to help facilitate the assignment of a piece and pickup. This was a really special moment. They recently discovered the stamping of Bethlehem steel in Pennsylvania on the piece, and were able to acquire original Bethlehem hardware in order to secure the piece for memorial display within their historic railway station. 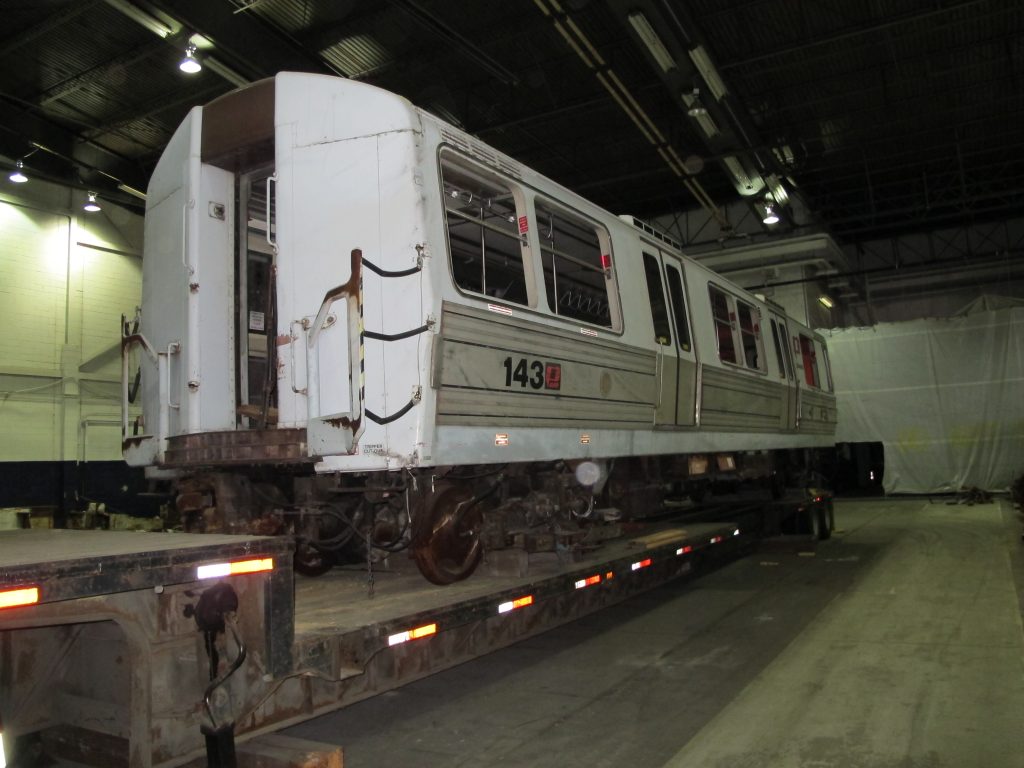 A portion of rail car #143 that once shuttled passengers between New York and New Jersey is shown here in 2011. The artifact was eventually donated to the Shore Line Trolley Museum in Connecticut. Photo By Amy Passiak

What else do you want people to know about the project?

I think one of the most amazing aspects of this project is its far reach. Many of the requesting organizations were emergency services, and of those there were quite a few volunteer departments. Because of this project, there are now memorials in cities, and also rural communities. The project has definitely created a network that will continue the memory of 9/11 through history. Although many groups are still working to build their memorials, I feel that the lasting legacy of this project is not yet fully realized. I look forward to traveling more extensively around the U.S. and being able to visit memorials that I was able to help facilitate.

See below for more photos of the project. 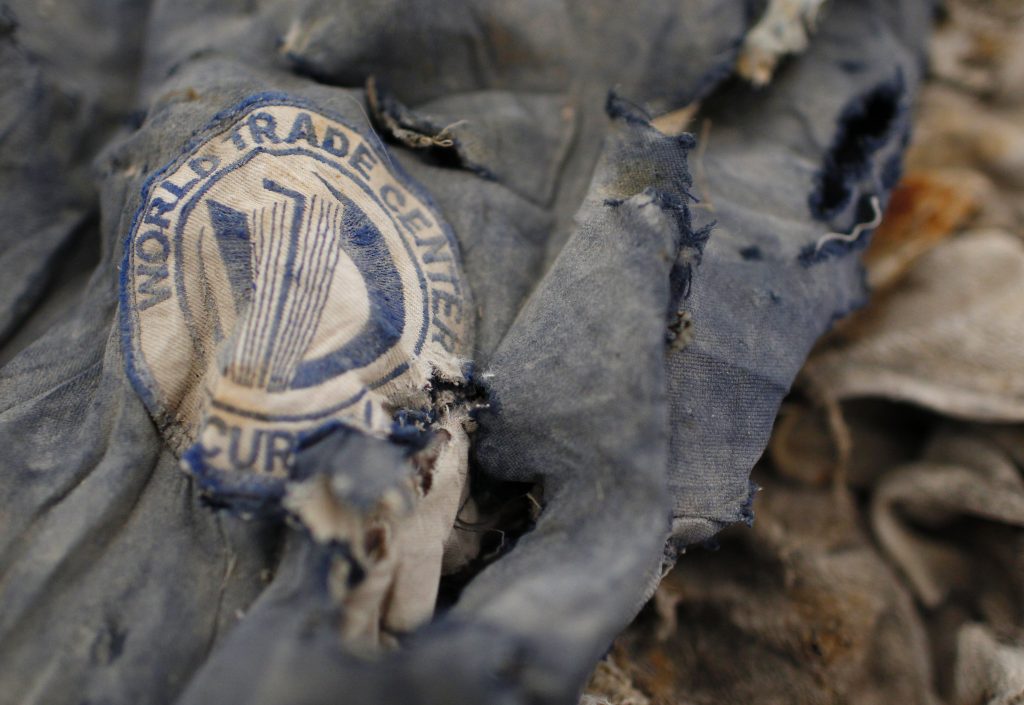 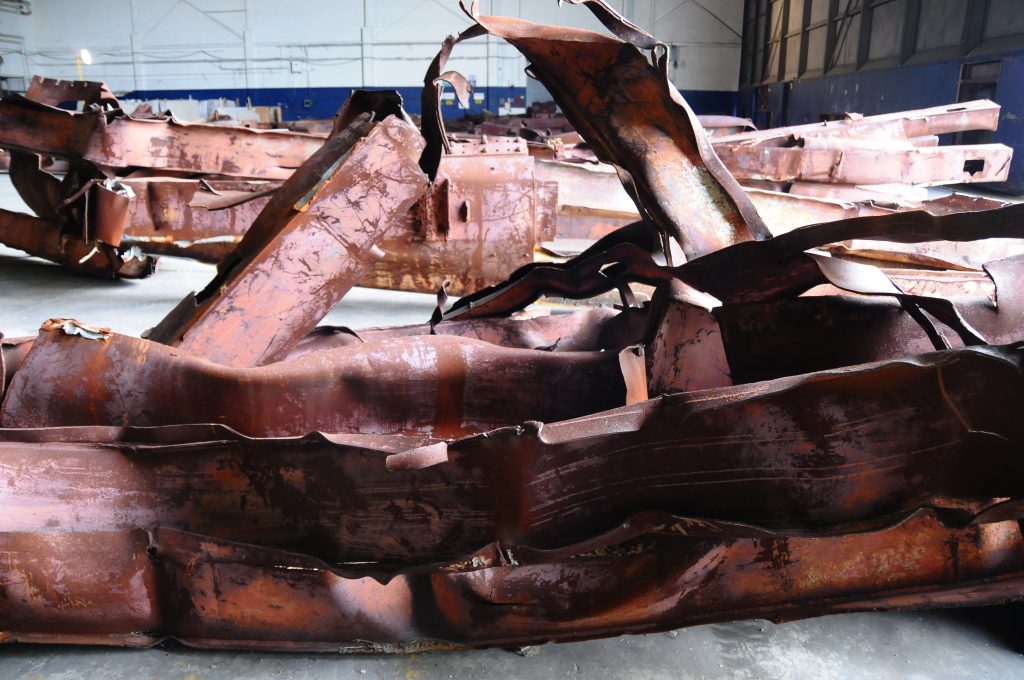 Steel beams shown in 2009 were once analyzed by the U.S. Department of Commerce’s National Institute of Standards and Technology. analysis project. Photo By Peter Gat 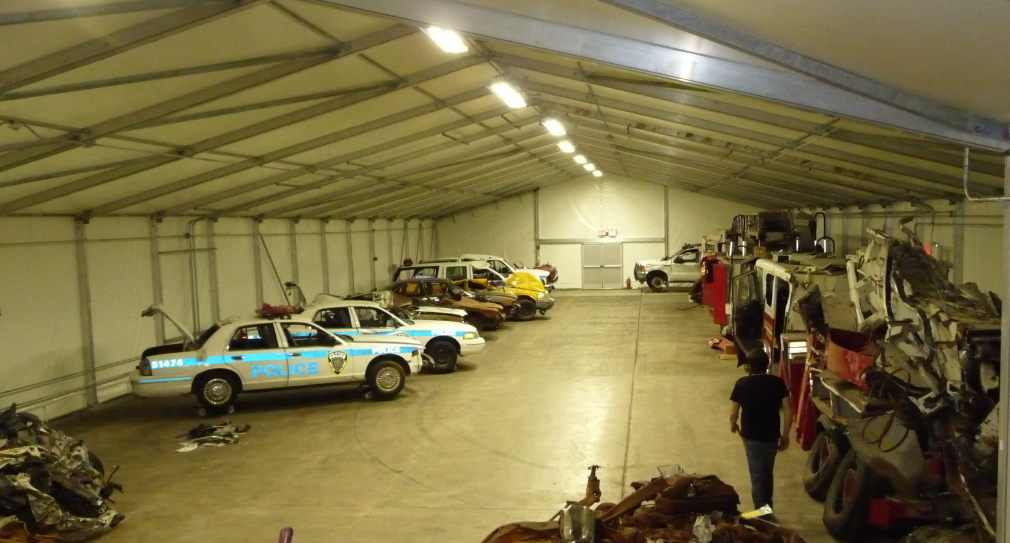 This enclosure inside the hangar shown in 2010 was created to house emergency vehicles damaged during the attacks of 911. Photo By Peter Gat 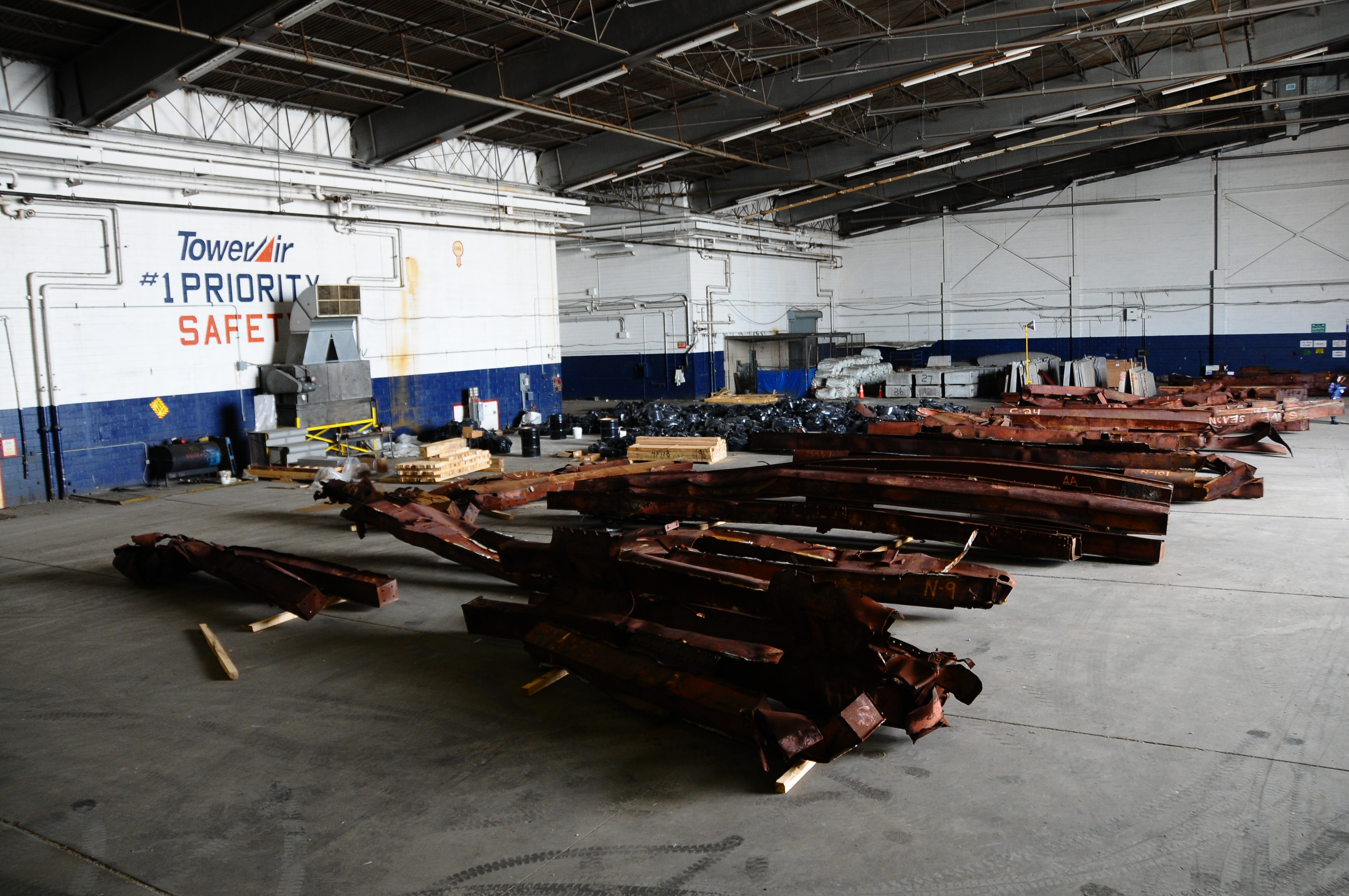 Steel beams analyzed by the National Institute of Standards and Technology rest in 2009 inside a hangar once occupied by Tower Air at JFK airport in New York. Photo By Peter Gat

Left: Pieces of steel from the wreckage of the World Trade Center buildings rests in Hangar 17 at the John F. Kennedy International airport below an American flag. A program to give away relics from the attacks of Sept. 11, 2001 in New York for memorials ended in August. Photo By Peter Gat