Three months after Hurricane Harvey struck the shores of Texas, some local environmental groups say they are in the dark about the safety of federal Superfund sites damaged during the storm.

In the days following the hurricane that made landfall there on Aug. 25, the U.S. Environmental Protection Agency said at least 13 of the 34 federal Superfund sites located in the path of the storm had been affected by widespread flooding and heavy rains. By Sept. 8, Texas Gov. Greg Abbott said only two of those sites had incurred damages.

Since the hurricane, the EPA mandated that two companies deemed responsible parties spend at least $115 million cleaning up one: the San Jacinto River Waste Pits. The site is located in the middle of the San Jacinto River about 20 miles east of Houston, where “highly toxic dioxin contamination,” known to cause host of health problems including cancer and developmental and reproductive issues, leaked out after flood waters tore through it.

But some residents are questioning the methods used to test that site and surrounding communities, as well as the EPA’s designation of at least 12 other federal Superfund sites “cleared” from damages since Hurricane Harvey. These concerns come as officials said that the amount of dioxin released into the San Jacinto River may never be known.

The lack of information about how the Superfund sites might influence the river’s overall water quality and surrounding communities worries Jackie Young, founder of the environmental group Texas Health Environment Alliance.

The San Jacinto River Waste Pits date back to the 1960s when toxic waste from paper mills was routinely dumped. The pits were designated a Superfund site in 2008. Since 2011, the waste, which is made up of dangerous dioxins and furans, has been temporarily held in place by an “armored cap.” The site is located in proximity to some of Harris County’s more than 4.5 million residents, including the city of Houston. 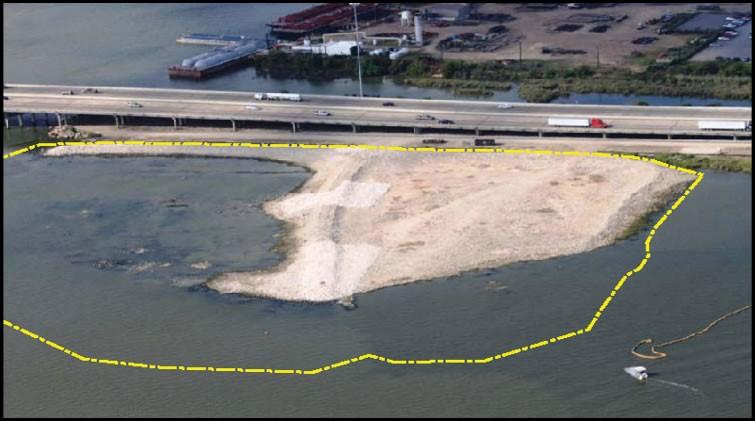 Aerial view of San Jacinto cap. Photo from the EPA

Preliminary data from the EPA indicated that in sediment samples taken around the site, dioxins levels spiked 2,300 times above acceptable levels.

Part of the EPA’s recovery plan is to remove most of the nearly 212,000 cubic yards of toxic waste at the San Jacinto site in the coming years. But it’s difficult to establish how much of the waste escaped into the river and nearby bayou, Samuel Coleman, the EPA’s acting regional administrator, told NewsHour Weekend.

He told a Congressional subcommittee in November testimony that one of the tactics the EPA used in the aftermath was a mobile lab capable of evaluating water samples “that proved to be invaluable in an area this is devastated and lacking in basic infrastructure.”

But more than a week after Harvey bore down on Texas on Aug. 25, the flooded Superfund sites had received only aerial inspections, EPA officials said.

Federal and local officials contend that access to those sites in the wake of the late August storm was limited, and that they quickly determined some sites, including the San Jacinto River Waste Pits and another called the U.S. Oil Recovery, had released toxic waste into surrounding waterways.

Bob Allen, the director of the Harris County Pollution Control Services, cited the complications of observing possible breaches at Superfund sites as flooding continued to grip the Houston area.

“Yes, waste got out in the river but how much is difficult to determine,” Allen said. “I think that both the locals and the feds and the state, we’re doing as much as we can. It’s a difficult site. It’s probably the most challenging site I’ve ever seen and I’ve been here almost 40 years.”

What about the surrounding community?

Rosanne Barone, of the advocacy group Texas Campaign for the Environment, said she worries about the river and several downstream bays that are popular with fishermen and for recreational use, both of which help feed the local economy.

Barone added that while many of the Superfund sites have been deemed secure by federal officials, a dearth of public data also raises questions about the potential long-term health effects on residents of the community.
“As far as damage to the other sites and cleanup, still not much is known,” Barone said.

“These are people who can literally see the waste from their homes.”

Young said in some cases it took the EPA, and companies responsible for overseeing some of the Superfund sites, weeks to begin conducting thorough inspections after the flooding.

A NewsHour Weekend analysis of EPA documents showed that some soil and water sampling from two Superfund sites began on Sept. 4. Sampling at 11 other sites that were flooded during the storm did not begin until at least Sept. 10.

“These are people who can literally see the waste from their homes,” Young said. 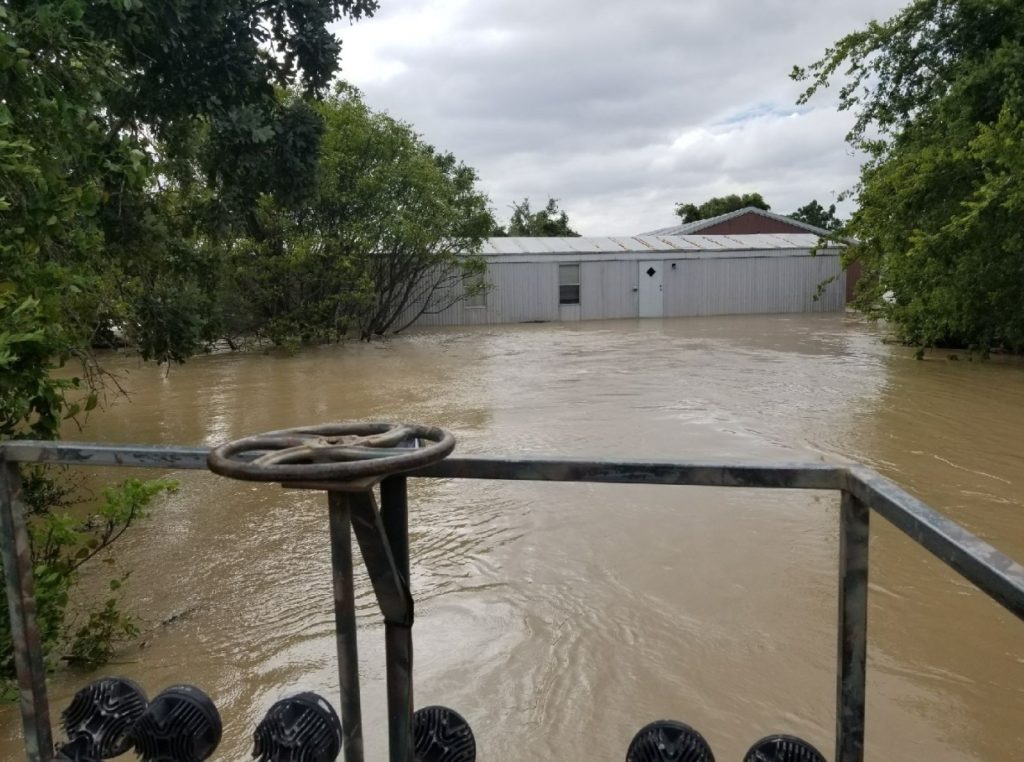 Greg Moss, 62, is a retired boat mechanic who lives just upriver from the San Jacinto River Waste Pits. His home and workshop are located adjacent to the river and two blocks from the Superfund site.

Moss said since the 1990s he has lived in the San Jacinto River Estates neighborhood known to locals as “River Bottom.” But he said he wasn’t aware of the toxic waste that was found nearby until 2011, long after he would ride his jet skis through the river’s murky waters or take joy-rides on his four-wheeler through the mud of the Superfund site. 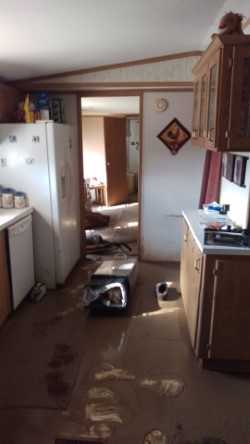 Moss said when the “tide surge” from Hurricane Harvey caused water to rise 113 inches into the shop he uses to fix motor boats, and 8 inches into his elevated home next door, he was trapped for days along with his dog until rescue workers took them out by boat.

A week later, when he returned home, the stench of mud and foul water was overwhelming and the months-long cleanup process was just beginning.

Moss cut out the damaged floor of his house and a portion of his wall, and used vinegar and peroxide to scour his shop. All the while, he said, he worried about how many toxins were now in his home.

Allen said he doesn’t necessarily agree that the federal government was slow to release information to the public, citing a confluence of data from various governmental agencies and private companies in the months following the storm.

“As soon as Harvey happened, as soon as it was safe enough to look at these sites the EPA was down here,” Allen said.

And Coleman said federal employees conducted a “detailed inspection” of the San Jacinto site, using boats to survey at least two areas that were breached and putting divers in the water amid zero visibility to collect water and sediment samples.

But Coleman said “historic contamination” predating Hurricane Harvey has also created problems in the nearby Houston Ship Channel and other local waterways including the San Jacinto River.

“The San Jacinto Waste Pits was a contributor to that, not the only contributor,” he said. 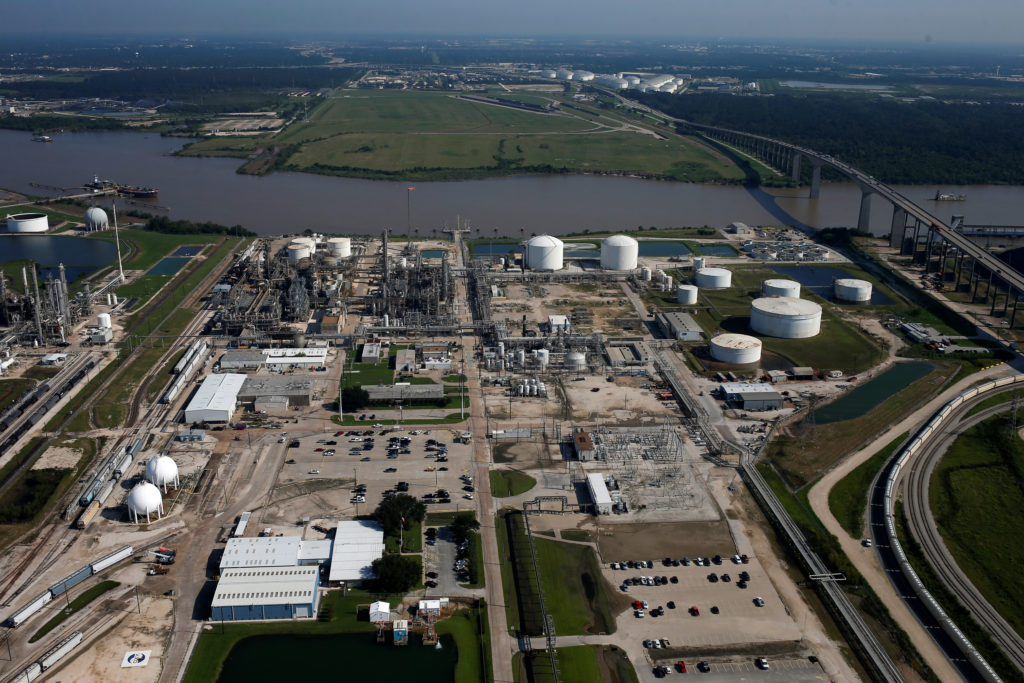 Coleman said after the hurricane, federal officials have left some of the testing and research on potential health effects up to state and county officials.

Scott Jones, of the Galveston Bay Foundation, said his group recently secured a $250,000 grant to test fish populations in the San Jacinto River and other nearby waterways after Harris County officials called for additional studies. But the results of those tests will be unavailable for at least a year.

“There’s just multiple sites unfortunately in this area with all of the petrochemical we’ve had in the past and we had a lot of you know past practices or lack of practices way back in the day,” Jones said. “So I hear from people mainly around the center of the waste pits that they’re definitely concerned about it.”

But Coleman said the process to clean up the San Jacinto River Waste Pits would likely take more than four years. The first year or two would be spent in negotiations with the two companies — International Paper and McGinnis Industrial Maintenance Corporation — which would be responsible for the cleanup.

And in a region known for storms and hurricanes, some advocates say that timeline could make the situation even more tenuous.

“The whole Superfund process is just so screwed up for a number of reasons that these sites just sit there with these highly toxic materials just sitting there right in the open, right in the middle of people’s areas where they live,” Barone said. “They were causing problems anyway and then when a hurricane hits it just makes it a million times worse.”