HIV Behind Bars: How Prisons and Jails Are Battling an Epidemic

BULAWAYO, Zimbabwe – The hand-written notice is pinned in a dark corner inside the main entrance of Khami Maximum Security Prison:

“It was observed that there was a movement of three lions within the farm prison recently … Officers, you are advised to warn your dependents and yourself.”

But people like prison medical officer Dr. Taurai Rugara, don’t stop often to read signs like that. On this prison farm in the middle of the Zimbabwean countryside, there’s something much more deadly lurking than big game: HIV. Approximately 28 percent of the 2,500 inmates here are infected with it — nearly double the prevalence rate in the rest of the country.

And fighting the disease in a place like this isn’t easy. “We’ve got challenges,” Rugara said. To name just a few: The cornmeal and beans given to most inmates don’t come close to the “high-protein” diet advised for most HIV-positive patients. The machines are slow and outdated. And when electricity blinks out, as it does often, everything remains dark and warm for days — a major problem for medication and blood supplies that need to be refrigerated. Sometimes the medical team even needs to perform surgery by candlelight.

And that’s aside from the recent Zimbabwe parliamentary report that made public the fact that — at least in some places in Khami’s four prison facilities — the inmates sleep on the floor, rain leaks into their cells, toilets don’t work and “plastic and cardboard box materials were put up as doors.” After years of debilitating economic inflation and political unrest, the Zimbabwean government simply has no money to fix all the problems. 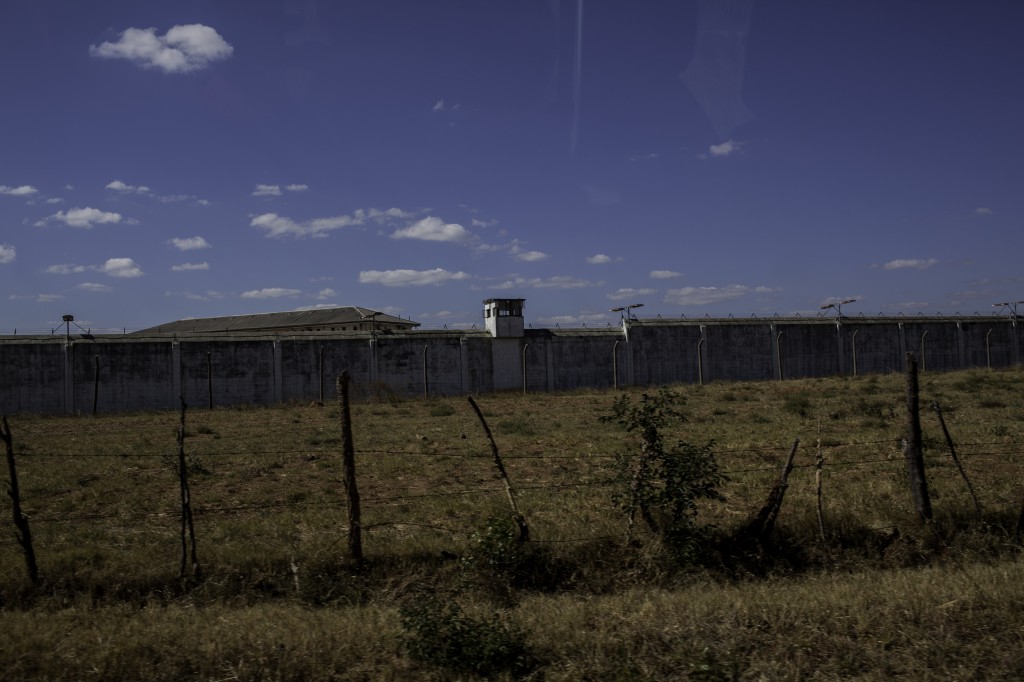 At Khami Prison in Matebeleland North, approximately 28 percent of the 2,500 inmates are infected with HIV. Photo by the Global Fund/Charlie Shoemaker.

“But we are trying,” Rugara said, pointing out that the news isn’t all bad. Despite the challenges, HIV-positive inmates are usually much healthier in Khami than before (and often after) they’re incarcerated.

Prisoners are among the 400,000-plus Zimbabweans currently receiving antiretrovirals — the life-saving drugs provided overwhelmingly by international groups like the Global Fund to Fight AIDS, Tuberculosis and Malaria and USAID. “There’s no stigmatization for the prisoners to access treatment,” said Perry Mwangala, the Global Fund’s senior portfolio manager for Zimbabwe.

And the confined nature of a complex like Khami also inadvertently gives prisoners an advantage: they can access those drugs without the long trips and long waits often necessary to receive the treatment at community clinics throughout the rest of Zimbabwe.

That means people like Biggie Dube have no trouble keeping up with their daily dose of antiretroviral drugs. The former pastor of a Church of Christ was locked up a little over a decade ago when women at his church accused him of rape. Two of his wives and six of his children became infected with HIV before the women spoke out against his behavior.

“Now I am serving 30 years,” he said. “I know that I wasn’t supposed to do these things as a pastor.”

But he doesn’t like to dwell on all that. Instead, he’s quick to turn the subject to the HIV support group he created for infected inmates a few years ago — a group that coordinates testing events, prevention workshops, and counseling sessions.

Dube said there’s a waiting list of 123 inmates that want to be tested. All of them now know how HIV is passed from one person to another, he said, and not a single one would participate in the type of risky sexual behavior that would further spread the HIV virus within the all-male prison.

“We don’t want homosexuals inside here,” he said flatly. “It’s very bad. Everyone believes that.”

Rugara himself said the condom distribution policy doesn’t really qualify as one of the prison’s many obstacles. “By and large, most of these prisoners come here infected and we just look after them,” he said. “There is not much transmission of HIV here.”

WASHINGTON | Chances are high that HIV was transmitted at the D.C. Jail.

There’s certainly no way to prove it, but before condoms were distributed at the correctional facility on Capitol Hill, some inmates were known to tell health officials straight-out that they were having unprotected sex there. With thousands of them cycling through the facility every year, many of whom are HIV-positive, it’s a simple matter of probability.

That’s why Traci Outlaw, the no-nonsense HIV testing coordinator for Unity Health Care, now hand-deliver condoms to the cells of transgender inmates, bisexual men or anyone else who wants them on her daily walks through the wards.

“There’s no point in wearing blinders — we know that they’re having sex,” Outlaw said. “We can’t answer how or where, but it happens and we know that. And if we don’t put tools in place to ensure that this virus can at least be arrested, it’s not going to go away.” 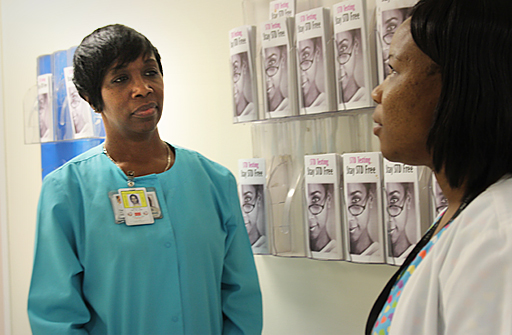 Traci Outlaw (left), the HIV testing coordinator at the D.C. Jail, talks with a nurse in the facility’s clinic.

The D.C. Jail became an outlier among U.S. correctional facilities in 2005 when it lifted its ban on condoms. Sex is still illegal here — as in almost every other jail and prison in the nation — but D.C.’s stubborn HIV/AIDS prevalence rate of around 3 percent eventually convinced officials that the condom ban had a greater potential to encourage the spread of HIV than to discourage sex.

And if sex is happening in the cells (which usually hold two inmates each), it’s extraordinarily important that it’s safe sex, Outlaw said. On any given day, 4.5 percent of the population in the jail is infected with HIV, according to the Department of Corrections and Unity Health Care.

The relatively high rate is partially driven by the fact that inmates here are more likely to have previously engaged in some of the risky behaviors — including unprotected sex and injectable drug use — that transmit the virus so well.

But there’s another reason the rate is higher, Outlaw said: The D.C. Jail is also identifying more formerly undiagnosed HIV-positive residents than nearly any other testing site in the city. In fact, it’s now the largest testing site in Washington. Just about every inmate admitted to the jail receives a voluntary HIV test as “the fifth vital sign” at intake, making it as routine as TB testing, and the physical and mental health screenings.

Those who are newly diagnosed are connected immediately with medical care, medication, and counseling. And at discharge, the facility puts them in touch with a medical provider in the community to make sure their treatment continues without interruption.

It’s widely regarded as an efficient and effective program — and one Dr. Taurai Rugara might emulate in Zimbabwe, if for only a more reliable flow of electricity and resources.

But it hasn’t always been this way.

“All of the areas where they’re now doing a good job, they were not doing a good job when we first reviewed their work,” said Walter Smith, executive director of D.C. Appleseed, a public interest organization that grades the city on its initiatives to combat HIV/AIDS.

When Appleseed launched its first annual report card in 2005, Smith said the testing, treatment and counseling programs at the jail needed quite a bit of improvement. The condom distribution policy seemed “haphazard,” he said, and the discharge procedures to connect HIV-positive inmates with medical resources in the community also weren’t “very well thought-out.”.

In part due to the spotlight of the DC Appleseed report cards, things started changing after 2005. And for the last four years in a row, “HIV/AIDS Among the Incarcerated” is the only category that’s landed straight As.

“Now don’t get me wrong, they’re not perfect. They’re not testing everybody. They’re not suppressing the viral load of everybody or perfect in their discharge processes. But they’re very, very good in all of these areas,” Smith said. “And it’s really quite remarkable that the area where things are really successful now is at the D.C. Jail.”

Even so, that success can be fleeting, Outlaw said.

Just as in Zimbabwe, the inmates eventually leave. And when a medical officer isn’t standing there to watch them take their daily medication, some simply won’t do it. Others will re-engage in risky habits as soon as they’re released. And still others will be transferred to a federal correctional facility where condoms aren’t permitted and unprotected sex is likely.

Outlaw repeats the same words to nearly all of them: “HIV doesn’t have a face, so you just have to be real cautious of who you become engaged with.”

With each discharge or transfer, she’s fully aware that many of them will return. She just hopes they’ll still be relatively healthy when they do.

Jason Kane traveled to Zimbabwe with the Global Fund to Fight AIDS, Tuberculosis and Malaria. To read part 1 of this series, “The Forgotten AIDS Orphans, From D.C. to Zimbabwe,”  click here.

EDITOR’S NOTE: Zimbabwe and the District of Columbia. They’re 8,000 miles apart and nearly as distant economically. But the two share at least two things in common: Both have some of the highest HIV/AIDS rates in the world. And in both places, ordinary people face remarkably similar challenges. As Washington prepares to host the International AIDS Conference July 22-27, the PBS NewsHour will profile some of the parallel stories unfolding around the epidemic on opposite ends of the globe. We continue our series with a look at correctional facilities.

Left: Dr. Taurai Rugara, the prison medical officer at Khami Prison in Zimbabwe, discusses the status of the HIV program with fellow officers. Photo by the Global Fund/Charlie Shoemaker.