Hot weather is intensifying hold on much of East, Central US

NEW YORK — Americans from Texas to Maine sweated out a steamy Saturday as a heat wave canceled events from festivals to horse races and pushed New York City to order power-saving steps to avoid overtaxing the electrical grid.

The National Weather Service said “a dangerous heat wave” was expected to break record highs in some places, particularly for nighttime. Daytime temperatures were poised to hit the mid- to upper 90s (about 34 to 37 degrees Celsius), with high humidity making it feel considerably hotter.

“It’s brutal,” Jeffrey Glickman said as he paused during a run Saturday morning in Washington.

The 37-year-old got out early to try to escape the worst heat but still planned to cut his route short on an already 90-degree (32-degree Celsius) morning.

“You just have to power through it the best you can,” he said.

In Norwich, Connecticut, Larry Konecny watched as one of his workers a couple of stories up in a boom lift cleaned the outside of an office building. The pair had no choice but to work in 90-degree heat and stifling humidity because the job needed to be done when office workers were away, Konecny said.

“He’s pressure-washing, so the water is splashing. So at least there’s some degree of refreshment,” he said.\ 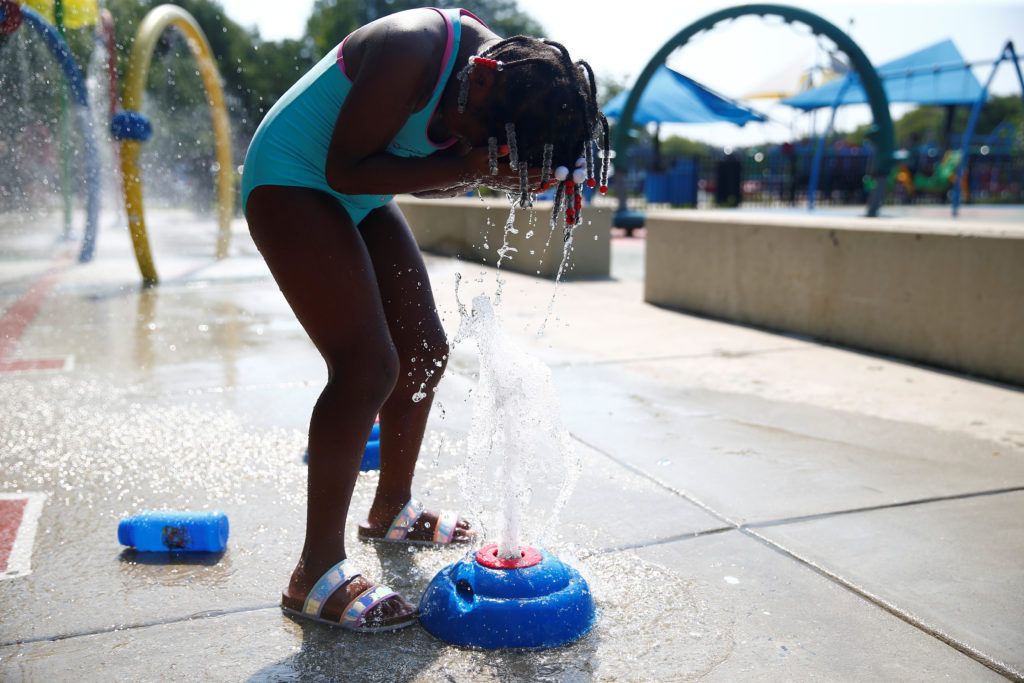 A child cools off in a water feature at a park in the Shaw neighbourhood during a heat wave in Washington, U.S., July 20, 2019. Photo by Eric Thayer/Reuters

The city also directed owners of many office buildings to set thermostats no lower than 78 degrees (26 degrees Celsius) through Sunday to reduce strain on the electrical grid.

The measure came after a power outage — related to an equipment failure, not heat — caused a roughly five-hour blackout July 13 that affected a 40-block stretch of Manhattan, including Times Square and Rockefeller Center.

In Michigan’s Lower Peninsula, storms packing strong winds, hail and lightning knocked out power to more than 200,000 people. The storms left about 20,000 customers without electricity in Wisconsin, toppling trees as wind gusts reached more than 80 mph.

In Philadelphia, several hundred people were evacuated from a retirement community due to a partial power outage, though it wasn’t immediately clear whether the problem was heat related. Residents were taken to a nearby shelter, and police said some went to a hospital for evaluation.

In Chicago, heat forced organizers of the Humana Rock ‘n’ Roll Marathon series to cancel one of three weekend races. Saturday’s 5K is off, but a 10K and half marathon are expected to go ahead Sunday.

In New Jersey, operators of the Monmouth Park horse racing track were considering whether to push back the $1 million Haskell Invitational later in the evening. Maximum Security, the horse that crossed the finish line first in this year’s Kentucky Derby and then was disqualified, was among those scheduled to run. 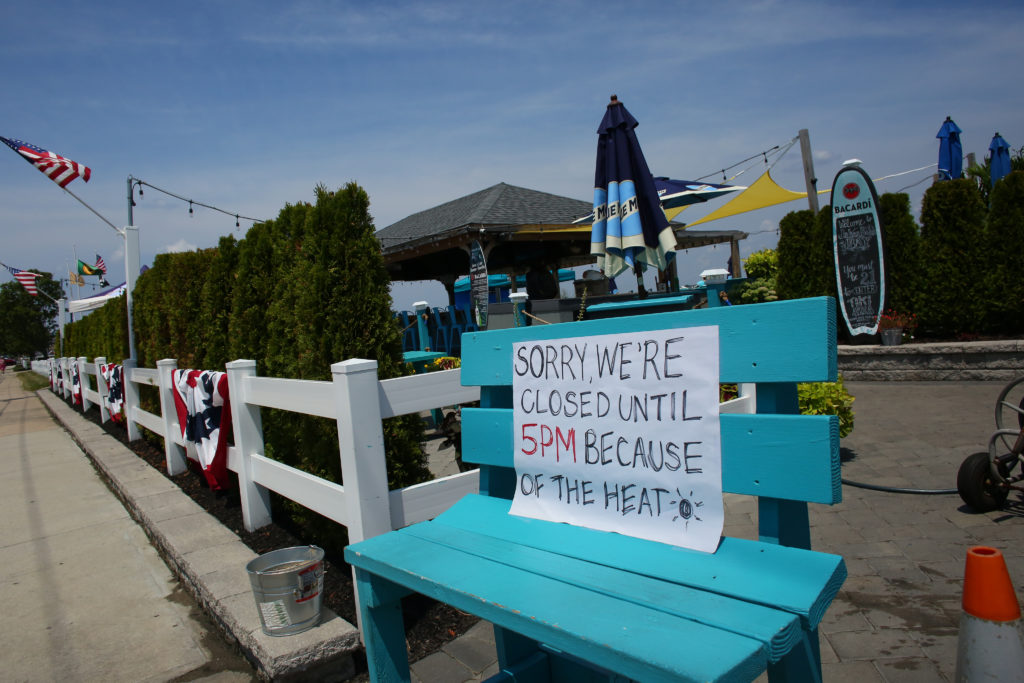 UNION BEACH, NJ – JULY 20: A poster is displayed outside a bar that is closed due to the heat on July 20, 2019 in Union Beach, New Jersey. An excessive heating warning designated for this weekend is affecting nearly two-thirds of the United States where more than 195 million people will experience temperatures above 90 degrees over the next few days. Photo by Kena Betancur/Getty Images

The track set up misting fans in the paddock and saddling areas for the 14-race card, and there were plans for shorter post parades before the race starts to limit track time for the horses.

Amid pressure over a series of horse deaths in California, several tracks have canceled their Saturday races, including Saratoga Race Course and Finger Lakes in New York and Laurel Park in Maryland.

At Yankee Stadium, where the home team was set to face the Colorado Rockies, extra hydration stations were set up in all three decks and the bleachers. Announcements reminded fans to keep drinking water.

Yankees manager Aaron Boone said he was mindful of the heat, too.

“You tend to monitor guys a little more closely, want to see how your pitchers are doing,” he said.

Left: WASHINGTON, DC - JULY 20: A man wears an umbrella to try to stay cool during an excessive heatwave on July 20, 2019 in Washington, DC. An excessive heat warning remains in effect throughout the weekend according to the National Weather Service. Photo by Alex Wroblewski/Getty Images