How cities are rebuilding to be more resilient to natural disasters

Fourteen years after Hurricane Katrina, the neighborhood of Gentilly, New Orleans, is still in the process of rebuilding.

Even after experiencing the costliest natural disaster in U.S. history, residents wanted to stay in their neighborhoods– going so far as to fight the city’s controversial “green dot” plan, which would have abandoned neighborhoods like Gentilly and turned them into wetlands.

In response to the pushback, New Orleans came up with an alternate solution: allow residents to remain in their homes, but also retrofit the area’s landscape to help the neighborhood better withstand the next natural disaster. The plan included new ditches, rain barrels and dry creeks designed to hold substantial amounts of water and reduce runoff that could destroy homes and other property.

New Orleans is not alone in its efforts to build communities that are more “resilient.” Cities, residents and businesses across the U.S. and the world are seeking ways to end the expensive cycle of rebuilding after natural disasters. Instead, they are boosting efforts to design buildings and local infrastructure to withstand hurricanes, floods or wildfires.

The efforts are being made even more urgent as climate change is expected to lead to more extreme weather events.

The goal: to rethink how cities and buildings are designed and offer real-world protections against natural disasters and climate change.

In response to the threat that rising sea levels pose to the town of San Rafael, California, Rebuild by Design competitors proposed solutions that would shift the city’s resources away from the current pump and levy system, build bike lane levees that double as flood protection, and gradually elevate highways and structures in the area. 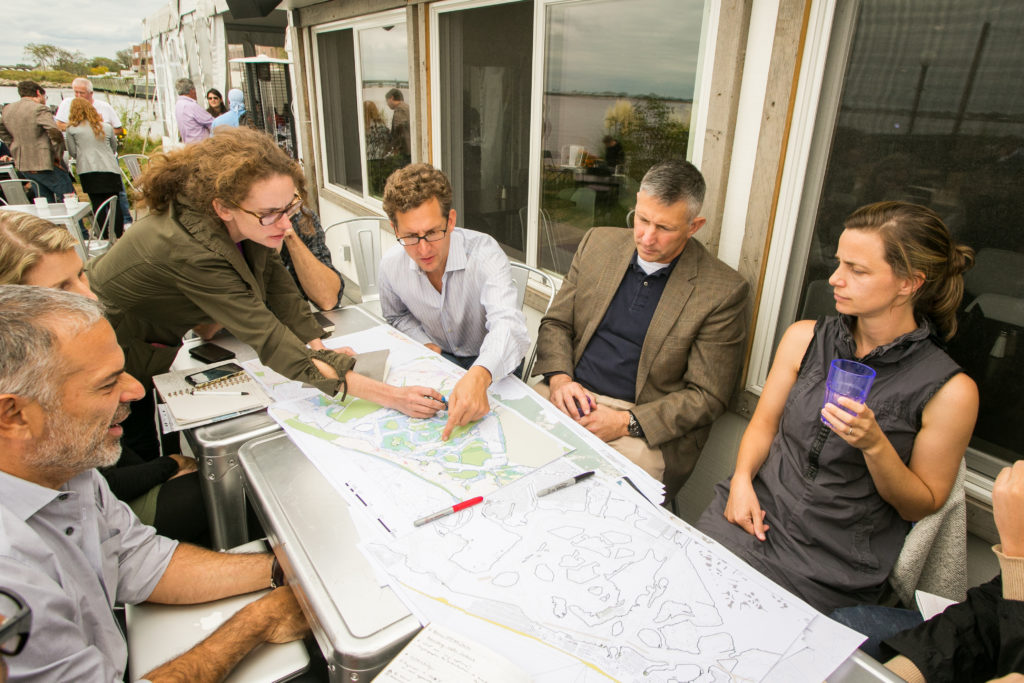 “Universally, we see that people understand that climate change is going to affect them — but they don’t actually understand how and what to do about it,” said Amy Chester, managing director of Rebuild by Design. “When you stand there with maps and say, ‘Hey, look, this is what’s going to happen here,’ it kind of transforms the thinking about the future and how we want to prepare our communities.”

Those calling for retrofitting cities with a focus on disaster mitigation argue that it will not only save lives and neighborhoods — it will also save money in the long-term.

A 2018 National Institute of Building Sciences report found that for every one dollar invested in disaster mitigation, six dollars can be saved in future disaster recovery.

“If cities, regions, states or governments would spend money up front, we would be much better off,” Chester said.

In the past three years, extreme weather has cost U.S. towns dearly. The NOAA reported a total loss of $329.9 billion and 3,318 lives.

Outside the U.S., the organization Build Change is on a mission to make disaster-resilient infrastructure commonplace and accessible to the world’s hardest-hit areas– training workers in Asia, Latin America, and the Caribbean to build with durable configuration, and with local materials and technology.

“We try to understand why buildings collapse and why they don’t,” CEO Elizabeth Hausler told the NewsHour. She said heavy roofs on weak walls, poorly-connected columns or bad quality building materials can all make buildings less stable. “It does cost money to retrofit, but it will save money in the long run,” she added.

After the 2015 earthquake in Nepal, Build Change saw an opportunity to make resilient homes affordable to those affected. Working with Nepal’s government, the company estimated tearing down and rebuilding damaged homes would cost $20,000 in total.

But instead of tearing down the buildings, Build Change designed a solution to rehabilitate the houses and make them more likely to withstand earthquakes in the future — all for less than $3,000.

“We can show a clear cost-benefit in terms of the value of the building — but that doesn’t even consider the reduction in lives lost, reduction in loss to GDP because people are still working,” Hausler said. 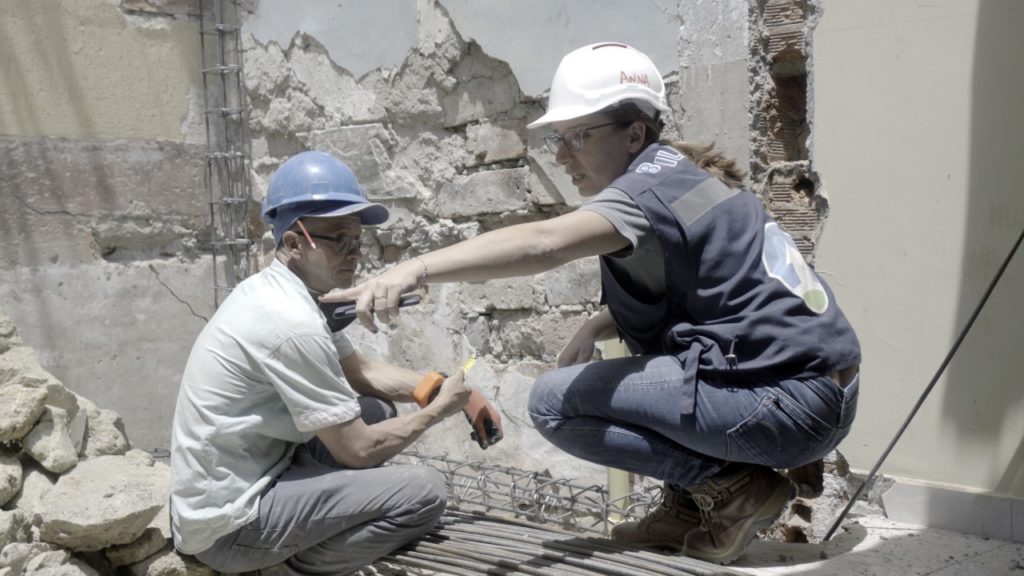 Build Change staff on the site of a house strengthening project in Colombia. Credit: Build Change.

Architecture at a Local Level

While some companies are hoping for big-picture, structural change in cities and communities, architectural firms are already retrofitting individual buildings within their communities.

After the winds of Hurricane Sandy had subsided in New York City, architect Jonathan Marvel walked down to the waterfront near the Brooklyn Bridge, and realized after surveying the high levels of river water that the 1 Hotel Brooklyn Bridge, then sitting at sea level in Brooklyn Bridge Park, would have to be redesigned. It would have to be elevated substantially to prepare for the next storm, adapting to a changing climate that will make hurricanes like Sandy more frequent and severe.

Marvel and his team raised the entire building five feet, installing flood gates at the garage doors on the ground level. So the new elevated podium did not stick out glaringly in the natural space, Marvel planted indigenous shrubbery, trees and flowers. 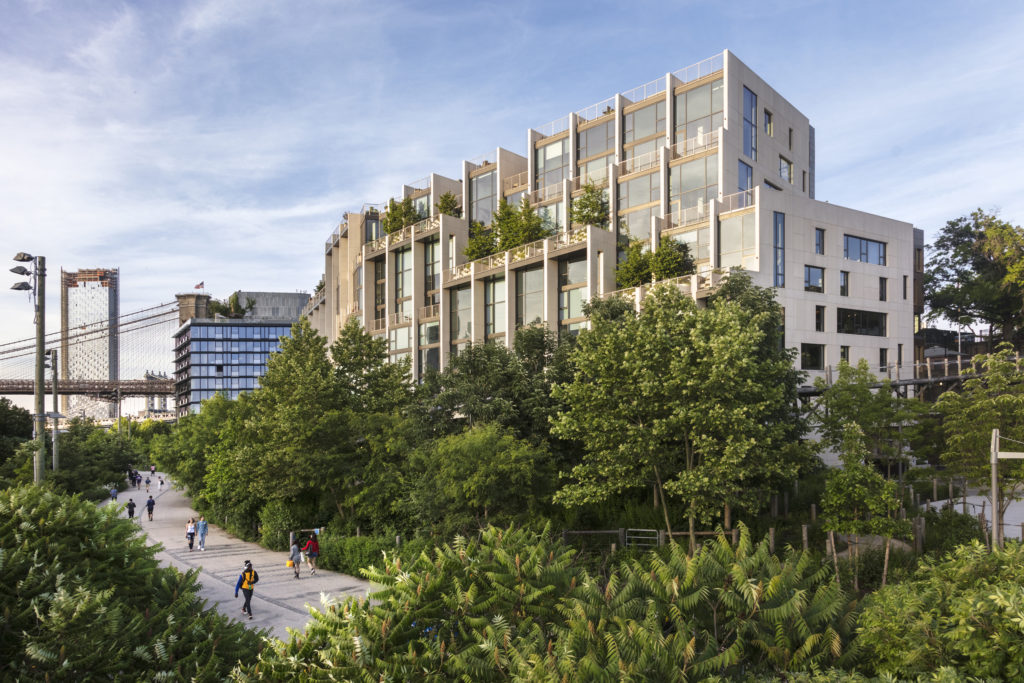 A view of 1 Hotel Brooklyn Bridge, a waterfront hotel in New York City that was resigned to better withstand flooding. Photo by David Sundberg/ESTO.

Waterfronts often take the biggest hit from storm surges and hurricane-force winds, which is why some critics say they shouldn’t be occupied at all. But Marvel argues cities can provide more recreation, education and entertainment near waterfronts by “building better, more resistant parks and public spaces” that incorporate new advances in architectural design.

A big part of retrofitting communities is understanding the experience of the people who live there.

“I want to be very clear: it’s not only about economics,” said Chester of Rebuild by Design. “It’s also about people’s lives. Building back is very, very traumatic.”

In New Orleans, Design Jones LLC is one of two landscape architecture firms working on the city’s adaptation project. A major feature of the project is new infrastructure that will reduce the potential for leaving homes completely damaged. 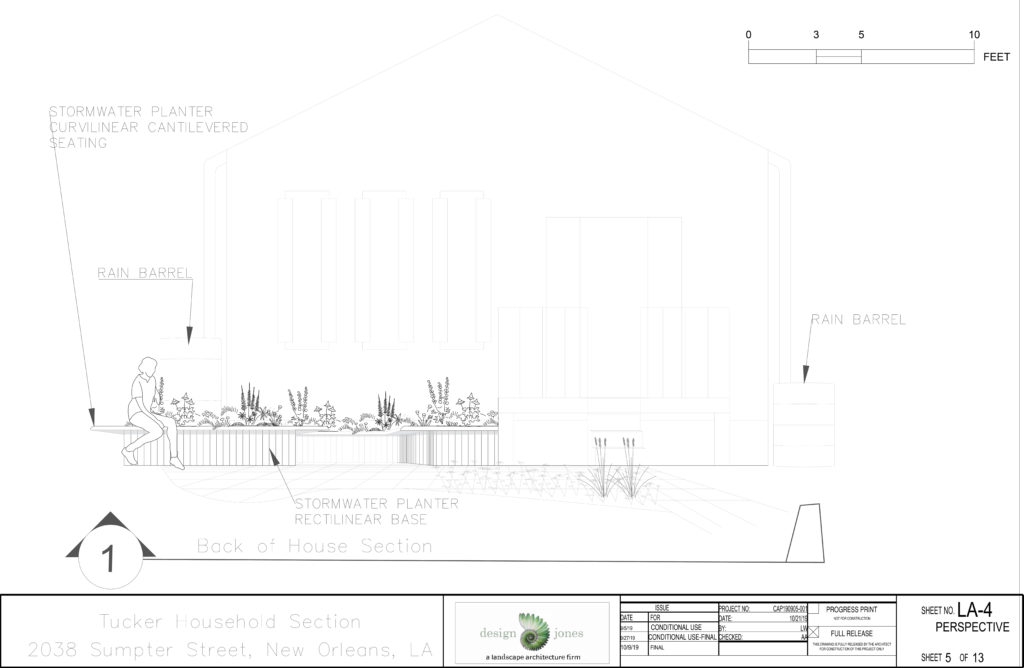 A Design Jones LLC landscape plan. Stormwater planters and rain barrels built into the design of the home are meant to reduce the likelihood of flooding. Credit: Lauren Williams.

“Out of necessity, people are thinking, ‘I need a home,’” said Diane Jones Allen, principal landscape architect of Design Jones LLC, who admits rethinking how infrastructure and cities are designed is a slow process. “It took awhile for people to understand that we have to do more than housing if we’re going to deal with the impacts of climate change.”

But the project has received interest from around 400 families in the area, and is expanding to surrounding neighborhoods in New Orleans.

Allen said it’s important that landscape designers come to the area with an understanding of what the residents of Gentilly have been through. “It’s a working, middle-class neighborhood,” she said. “People’s homes — it’s their pride. They’re still in this community even after all of the flooding.”

In meeting with members of the community, the firms bring examples of potential designs, hoping to give residents a connection to the project. “We will bring actual materials, show them drawings,” said Allan. “We want it to be beautiful because it’s somebody’s home.”

Left: Rebuild by Design visited communities in the region affected by Hurricane Sandy. This house, located on the Connecticut shoreline was raised in response to the storm. Credit: Cameron Baylock for Rebuild by Design.