How do U.S. gun laws compare to other countries?

The debate over gun control in the United States has waxed and waned over the years, stirred by a series of mass shootings by gunmen in civilian settings. In particular, the killing of twenty schoolchildren in Newtown, Connecticut, in 2012 prompted a new national discussion about gun laws. However, legislation that would have banned semiautomatic assault weapons was defeated in the Senate despite extensive public support. In 2017, mass shootings at a music festival in Las Vegas and at a church near San Antonio have rekindled the gun control debate and invoked comparisons of U.S. gun policies and those of other wealthy democracies.

Gun ownership in the United States is rooted in the Second Amendment of the Constitution: “A well-regulated Militia, being necessary to the security of a free State, the right of the people to keep and bear Arms, shall not be infringed.”

However, the right is not unlimited. The U.S. Supreme Court has upheld some firearms restrictions, such as bans on concealed weapons and on the possession of certain types of weapons, as well as prohibitions against the sale of guns to certain categories of people. The Gun Control Act of 1968 prohibits persons under eighteenyears of age, convicted criminals, the mentally disabled, dishonorably discharged military personnel, and others from purchasing firearms. In 1993, the Brady Handgun Violence Prevention Act mandated background checks for all unlicensed persons purchasing a firearm from a federally authorized dealer.

At the same time, the U.S. Supreme Court has rolled back certain gun laws. In 2008, the court struck down a Washington, DC, law that banned handguns. 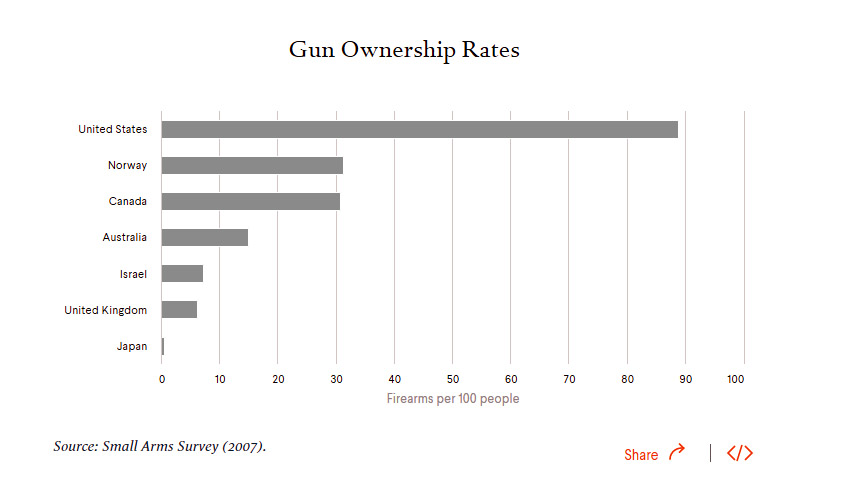 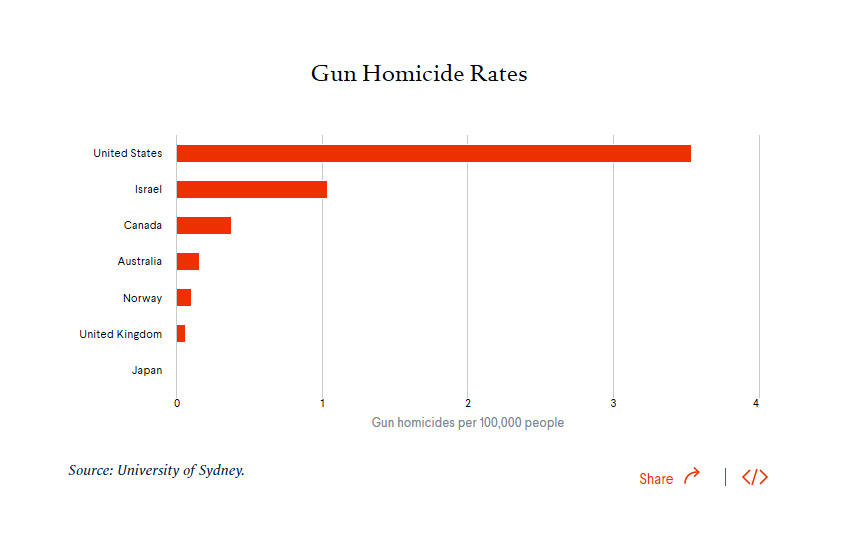 Federal law provides the basis for firearm regulation in the United States, but states and cities can impose further restrictions. Some states, such as Idaho, Alaska, and Kansas, have passed various laws attempting to nullify federal gun legislation, but legal analysts say these are unconstitutional.

As of 2017, there were no federal laws banning semiautomatic assault weapons, military-style .50 caliber rifles, handguns, or large-capacity magazines. There was a federal prohibition on assault weapons and large-capacity magazines between 1994 and 2004, but Congress allowed these restrictions to expire. In the days after the mass shooting in Las Vegas, in October, some lawmakers expressed provisional support for a federal prohibition of so-called bump fire stocks, devices that allow semiautomatic guns to fire at a rate approaching that of automatic weapons.

The United States, with less than 5 percent of the world’s population, has about 35–50 percent of the world’s civilian-owned guns, according to a report by the Switzerland-based Small Arms Survey. It ranks number one in firearms per capita.The United States also has the highest homicide-by-firearm rate among the world’s most developed nations. But many gun rights proponents say these statistics do not indicate a causal relationship and note that the

As in the United States, Canada’s national government sets gun restrictions that the provinces, territories, and municipalities can supplement. And like its southern neighbor, Canada’s gun laws have often been driven by gun violence. In 1989, a student armed with a semiautomatic rifle killed fourteen students and injured more than a dozen others at a Montreal engineering school. The incident is widely credited with driving major gun reforms that imposed a twenty-eight-day waiting period for purchases; mandatory safety training courses; more detailed background checks; bans on large-capacity magazines; and bans or greater restrictions on military-style firearms and ammunition.

Changes to the law in 1995 required individuals to obtain a license to buy guns and ammunition, as well as register all firearms. However, in 2012, the requirement to register nonrestricted guns was dropped, and related public records were expunged.

The inflection point for modern gun control in Australia was the Port Arthur massacre of 1996, when a young man killed thirty-five people and wounded nearly two dozen others. The rampage, perpetrated with a semiautomatic rifle, was the worst mass shooting in the nation’s history. Less than two weeks later, the conservative-led national government pushed through fundamental changes to the country’s gun laws in cooperation with the various states and territories, which regulate firearms.

The National Agreement on Firearms all but prohibited automatic and semiautomatic assault rifles, mandated licensing and registration, and instituted a temporary gun buyback program that took some 650,000 assault weapons (about one-sixth of the national stock) out of public circulation. Among other things, the law also required licensees to demonstrate a “genuine need” for a particular type of gun and take a firearm safety course. After another high-profile shooting in Melbourne in 2002, Australia’s handgun laws were tightened as well. Many analysts say these measures have been highly effective, citing declining gun death rates and the absence of gun-related mass killings in Australia since 1996.

Military service is compulsory in Israel, and guns are a part of everyday life. Much of the population has indirect access to an assault weapon by either being a soldier or a reservist or a relative of one. By law, most eighteen–year-olds are drafted, psychologically screened, and provided at least some weapons training after high school. After serving typically two or three years in the armed forces, however, most Israelis are discharged and subject to civilian gun laws.

The country has relatively strict gun regulations, including an assault-weapons ban and a requirement to register ownership with the government. To become licensed, an applicant must be an Israeli citizen or a permanent resident, be at least twenty-one-years-old, and speak at least some Hebrew, among other qualifications. Applicants must also show genuine cause to carry a firearm, such as self-defense or hunting.

Modern gun control efforts in the United Kingdom have been precipitated by extraordinary acts of violence that sparked public outrage and, eventually, political action. In 1987, a lone gunman armed with two semiautomatic rifles and a handgun went on a six-hour shooting spree roughly seventy miles west of London, killing more than a dozen people and then himself. In the wake of the incident, known as the Hungerford massacre, Britain introduced the Firearms (Amendment) Act, which expanded the list of banned weapons, including certain semiautomatic rifles, and increased registration requirements for other weapons.

A gun-related tragedy in the Scottish town of Dunblane in 1996 prompted Britain’s strictest gun laws yet. A man armed with four handguns shot and killed sixteen schoolchildren and one adult before committing suicide in the country’s worst mass shooting to date. The incident sparked a public campaign known as the Snowdrop Petition, which helped drive legislation banning handguns, with few exceptions. The government also instituted a temporary gun buyback program, which many credit with taking tens of thousands of illegal or unwanted guns out of supply.

Gun control had rarely been much of a political issue in Norway—where gun laws are viewed as tough, but ownership rates are high—until right-wing extremist Anders Behring Breivik killed seventy-seven people in attacks in Oslo and at an island summer camp in 2011. Though Norway ranked tenth worldwide in gun ownership, according to the Small Arms Survey, it placed near the bottom in gun homicide rates. (The U.S. rate is roughly sixty-four times higher.) Most Norwegian police, like the British, do not carry firearms.

In the wake of the tragedy, some analysts in the United States cited Breivik’s rampage as proof that strict gun laws—which in Norway include requiring applicants to be at least eighteen years of age, specify a “valid reason” for gun ownership, and obtain a government license—are ineffective. “Those who are willing to break the laws against murder do not care about the regulation of firearms, and will get a hold of weapons whether doing so is legal or not,” wrote Charles C. W. Cooke in National Review. Other gun control critics have argued that had other Norwegians, including the police, been armed, Breivik might have been stopped earlier and killed fewer victims. After the massacre, an

Gun control advocates regularly cite Japan’s highly restrictive firearm regulations in tandem with its extraordinarily low gun homicide rate, which is the lowest in the world at one in ten million, according to the latest data available. Most guns are illegal in the country and ownership rates, which are quite small, reflect this.

Under Japan’s firearm and sword law [PDF], the only guns permitted are shotguns, air guns, guns with specific research or industrial purposes, or those used for competitions. However, before access to these specialty weapons is granted, one must obtain formal instruction and pass a battery of written, mental, and drug tests and a rigorous background check. Furthermore, owners must inform the authorities of how their weapons and ammunition are stored and provide their firearms for annual inspection.

Some analysts link Japan’s aversion to firearms with its demilitarization in the aftermath of World War II. Others say that because the overall crime rate in the country is so low, most Japanese see no need for firearms.

This backgrounder first appeared on the Council on Foreign Relations’ website. View the original report here.

Left: A Chicago police officer examines a gun that was handed over as part of a "Gun Turn-in" event in Chicago on May 28. Photo by Jim Young/Reuters