MIAMI — When Florida began administering the COVID-19 vaccine, Maria Martinez assumed it wouldn’t be difficult for her to get vaccinated as a 65-year-old essential worker in the agriculture sector.

But Martinez is an undocumented immigrant from Mexico who doesn’t have official identification or paperwork proving that she lives in Florida, a requirement for receiving the vaccine under the state’s eligibility guidelines.

Martinez had been waiting months to get vaccinated when she heard that her county health department in the Orlando area would be holding a vaccination event where residents would not be asked about their immigration status.

“I know other [undocumented immigrants] who aren’t getting [the vaccine] because they think they’ll get arrested” if they show up without an ID, Martinez said in Spanish on a recent evening, as she waited at the vaccination clinic for her first shot. But the risk was worth it, she added. “If you don’t get the vaccine, you can get sick and die.”

Florida opened up access to the COVID-19 vaccine to all adult residents on April 5. But the stringent proof of residency requirement has created a significant obstacle for undocumented workers, many of whom hold seasonal agriculture or food industry jobs and have helped keep Florida’s economy afloat during the past year.

The Mid-County Senior Center in Lake Worth, Florida, hosted a COVID-19 vaccination event on April 24, 2021. Photos by Eva Marie Uzcategui

The hurdles in Florida — a state that has faced scrutiny at different points in the pandemic for allowing businesses to remain open despite soaring infection rates — underscores a nationwide problem as the vaccine rollout continues: how to reach millions of undocumented immigrants who fear that coming in contact with local, state or federal authorities could lead to detention or deportation.

Some states, like New York, have gone to great lengths to make clear that all of their residents are eligible to get vaccinated, regardless of whether they entered the country legally. But Florida has made it harder for undocumented workers to get COVID-19 vaccines, immigrant rights advocates argue. 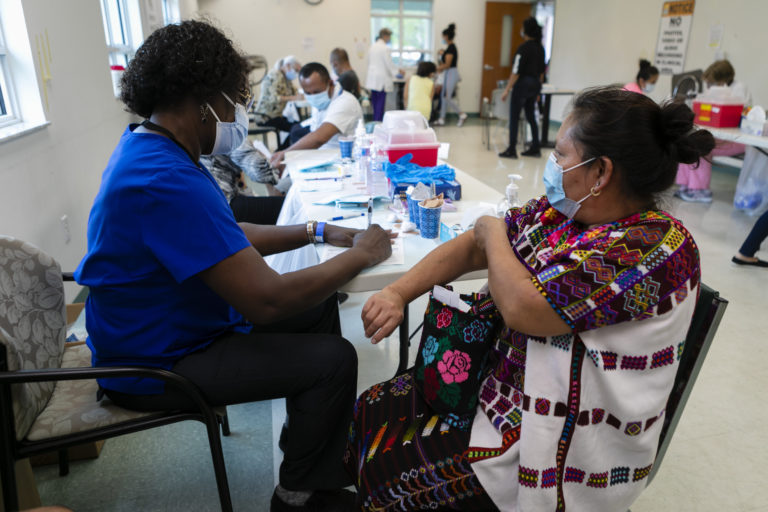 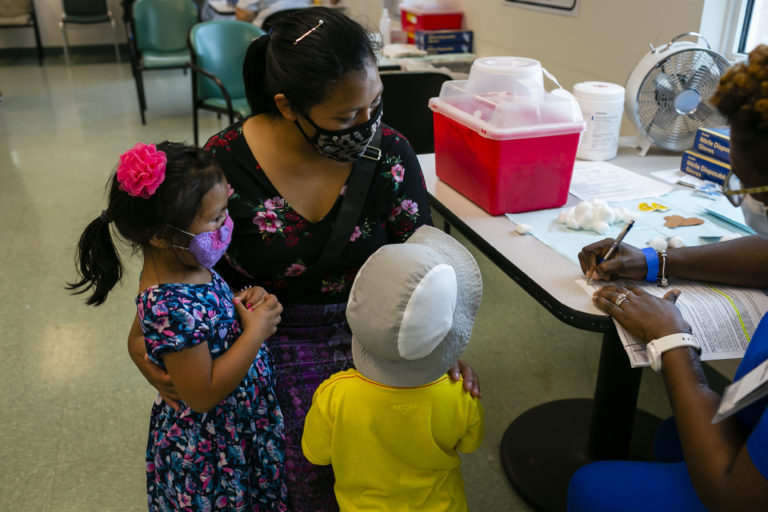 Left to right: Some caption here.

Most of the criticism has been directed at Republican Gov. Ron DeSantis, a close ally of former President Donald Trump, who resisted pressure to shut the state down in the early days of the pandemic and later banned local governments from enforcing mask mandates.

DeSantis sparked a backlash last year when he blamed a surge in coronavirus cases in Florida on the state’s “overwhelmingly Hispanic” farmworker population.

DeSantis has been “playing politics” with the vaccine rollout while scapegoating immigrants and farmworkers in particular, Florida Agriculture Commissioner Nikki Fried, a Democrat, said in an interview.

“A lot of our farmworkers don’t trust the government, and have really not been treated well during this pandemic,” Fried said.

The governor’s office did not respond to requests for comment.

“The message [from the state] has been that you have to have an ID and be able to prove that you’re a legal resident of Florida. It’s keeping people away from coming to vaccination centers,” said Neza Xiuhtecutli, the head of the Farmworker Association of Florida.

In addition to posing a public health risk, the approach could hurt a key sector that helps power the state economy, Xiuhtecutli and others said.

Florida is the nation’s leading citrus and sugarcane producer, and ranks second behind California in greenhouse, nursery, and other horticultural production, according to state data. Florida generated $7.7 billion in agricultural cash receipts in 2019, federal statistics show.

Florida’s agriculture sector employs 150,000 to 200,000 farmworkers each year. Thousands are undocumented, though the precise number is unknown since the population of illegal residents in the state is difficult to track.

Advocacy groups wrote to DeSantis in mid-January as Florida ramped up its vaccine rollout urging him to prioritize farmworkers, arguing that the agriculture sector was a key part of the state economy.

But less than two weeks later, Florida Surgeon General Scott Rivkees issued an executive order on Jan. 22 establishing the proof of residency requirement for COVID-19 vaccines. Rivkees said the new guideline was aimed at preventing residents from other states from obtaining the vaccine in Florida.

DeSantis echoed the sentiment at a press conference that day in which he said the state was prioritizing getting seniors vaccinated.

The COVID-19 vaccine is “not for people that are just visiting,” DeSantis said at the time.

Under the rules, people living in Florida must show a valid state driver’s license or a separate identification card issued by the state highway and motor vehicles department.

If they don’t have either form of ID, residents can qualify by showing two documents from a list that includes items such as a mortgage statement, lease agreement, utility bill, or a piece of mail from a government agency.

Critics blasted the residency rule after it went into effect, but DeSantis rejected calls to drop it and in March announced that the state would not take jobs into account in the vaccine rollout, ending advocates’ hopes that farmworkers would be prioritized in the first round of vaccines.

In recent weeks, as the vaccine has become more widely available, farmworker and immigrant rights groups have raced to get seasonal workers vaccinated before many start migrating north next month for jobs in other states.

Some advocacy groups have convinced county health departments conducting vaccination events to accept forms of identification that don’t qualify under the state residency guidelines — such as membership cards from their organizations, passports, and other documents — in order to help undocumented workers get vaccinated.

The Guatemalan-Maya Center helped more than 700 people get vaccinated on April 24 at an event in Lake Worth, where health officials did not require residents to present a state ID.

“We vaccinated community members with any identification they had, even their birth certificates,” said Mariana Blanco, the center’s assistant executive director.

Blanco and the leaders of other advocacy groups who have followed a similar approach said they weren’t clear what penalties they would face if the state health department decided their actions violated the residency guidelines. None said they had been contacted by the state regarding their vaccination events.

Still, the effort has been slow, and groups have struggled to find ways to make the vaccine more accessible to immigrants who work long hours or live in remote, rural places.

Herlinda, an undocumented immigrant who asked that her last name not be used, is still waiting to get the vaccine. In a recent interview at her apartment roughly an hour north of Miami, the 39-year-old mother of two said she was forced to miss two weeks of work at a flower nursery last year after coming down with COVID-19.

The experience left her eager to get vaccinated, but Herlinda said she still worried she might not qualify, despite reassurances from a local community group that her immigration status wouldn’t be an issue.

“I’m scared because I’ve heard that the government won’t let illegal immigrants get vaccinated,” she said. “I don’t have any identification. I have a Guatemalan ID and that’s it.”

False rumors that the vaccines aren’t safe have created another obstacle in getting more people vaccinated, said Arturo Lopez, the head of the Coalition of Florida Farmworker Organizations.

“We’re dealing with a lot of myths [in the immigrant community], like it’ll make you age faster or you won’t be able to work,” said Arturo Lopez, the head of the Coalition of Florida Farmworker Organizations.

At the vaccination event in Apopka where Martinez waited for her first shot, she said she was more concerned about getting sick and missing work than anything else. “A lot of people are scared of the vaccine but I’m not,” she said.

Martinez opened her wallet and pulled out her consular card from Mexico. It’s the only ID she had, and Martinez said that she hoped it would work.

Left: Volunteers assist a woman seeking the COVID-19 vaccine at the Mid-County Senior Center in Lake Worth, Florida, on April 24, 2021. Photo by Eva Marie Uzcategui