How Muslim families are celebrating a second pandemic Ramadan

This week will mark the end of Ramadan for Muslim families across the world, and even though vaccinations, mask mandates and social distancing have slowed the spread of COVID-19 in much of the United States, the pandemic is still hampering what’s meant to be a deeply communal holiday.

For Rizwan Bhatti and his wife Farah, that means they’ve spent the last two holidays in the close company of their three teenage children at home in Southern California.

“We miss a lot of the opportunities we normally had to socialize with our community, friends and family,” said Farah.

A major holiday for over 2 million followers of Islam in the U.S., Ramadan is commonly observed by fasting each day of the holiday, from sunrise to sunset, often broken by large meals, called iftar, held at community centers or in people’s homes. Rizwan explained that it’s a way to refocus on what’s important in life and be thankful for what you have.

“It’s really an opportunity to reconnect with God, a recharging of your spirituality,” he said.

It’s also a time when observers visit their mosque or community center almost every day and focus their energies on charitable acts. These rituals make the season an extremely hectic and social period, filled with time spent with family and friends.

Inevitably, the social distancing measures needed to curb the virus have harshly limited traditional observances, especially at centers of prayer.

Inside the Islamic Community Center of Phoenix (ICCP),  a lot of the familiar staples of the pandemic era can be found beside traditional essentials of the mosque. Next to water bottles and religious pamphlets are hand sanitizer and disposable face masks. On the floor, where repeating patterns designated an individual’s space for prayer, there is blue tape marking the socially-distanced area of worship.

“We’re trying to compromise and find a balance between spiritual needs and being safe,” said Usama Shami, the chairman of the board at the center in Phoenix.

These scenes are occuring in mosques and community centers all over the world as Muslims observe the second Ramadan season during the COVID-19 pandemic. 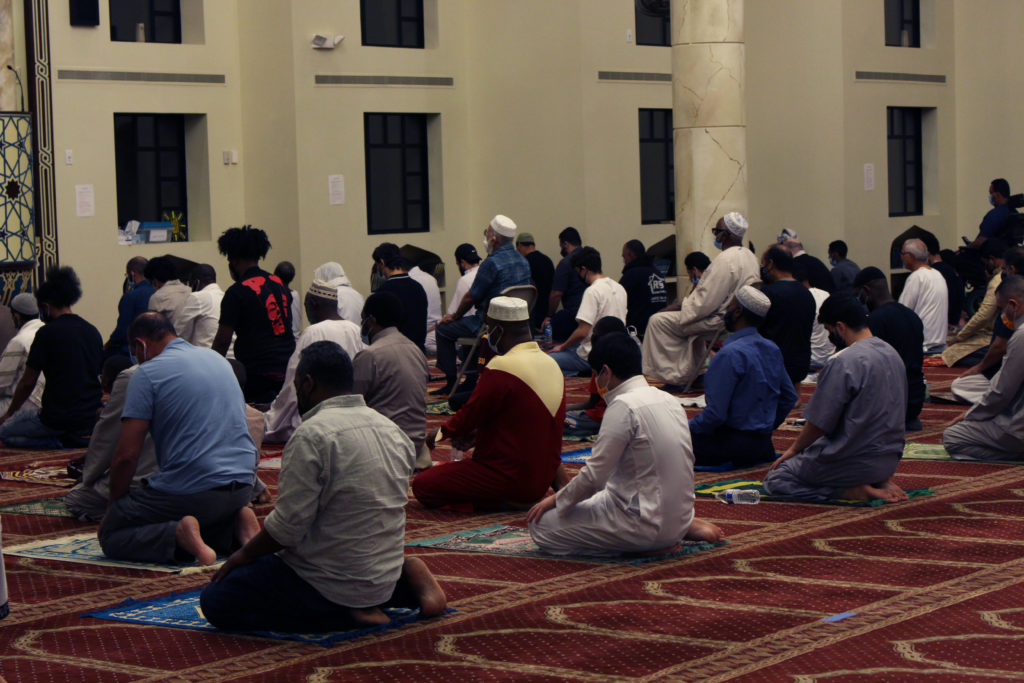 Congregants observing an evening prayer at the Islamic Community Center of Phoenix on April 29, 2021. Photo by Justin Stabley/PBS NewsHour

Hurunnessa Fariad, the director of outreach for the All Dulles Area Muslim Society (ADAMS), said that while the center has been able to allow services this year, they have to maintain restrictions by limiting daily guests, doing temperature checks and serving food outside in packaged meals.

“It’s a bare minimum we’re giving the community so they feel connected,” she said. “In Islamic tradition, saving life takes precedence over ritual and communal prayers.”

Last year, many mosques closed down entirely, opting to stream their prayer services online. For the community centers, this has caused a steep drop in donations, pushing many organizations to dip into savings.

“If you are not coming, then you don’t think of giving as much,” said Maqsood Quadri, chairman of the Downtown Islamic Center in Chicago.

Attendance is less than a quarter of what it usually is during normal years, Quadri said. Shami believes many families are also struggling with unemployment or other job issues, which may also contribute to the decline in donations.

During the 2020 Ramadan season, the traditional evening meals were absent, daycare services were reduced or eliminated and Muslims were largely severed from their friends and family.

“During normal Ramadan, this was a time for kids to play and gather nightly,” said Shami. “They can go to different schools, but when they come to the mosque, they see their friends from the mosque, and that connection has been lost.”

Rizwan said it was also difficult for their kids since they couldn’t visit their friends or travel to see their grandparents and cousins in the Midwest. But he said the silver lining of the Ramadan spent in quarantine was that it allowed for more time to reflect and more time to spend with his family.

“There was no rush, we enjoyed each other’s company, did the online program at home, so, in a way, it was great,” he said. “Last year at this time, there was so much uncertainty with the COVID situation. Nobody knew what was going on. And the one certainty we had in our life was Ramadan.”

Farah agreed, explaining there were some benefits to being home for the holiday.

“When you go to a gathering, kids separate, men sometimes sit together, women are talking with their friends,” Farah added. “But at home it was all five of us experiencing it together the same way.”

During this second Ramadan season of the pandemic, observers have had time to adapt to health standards and rituals that were distressingly unfamiliar last April, but are now a part of daily life.

“We’re getting a little case of the way it used to be, but it’s a hybrid Ramadan,” said Farah.

For Fariad, the eased restrictions have allowed her to connect back with other congregants.

“This [year] is actually nice since I get to see my coworkers, I get to see my community members,” said Fariad. “Even though it’s behind a mask, at least we’re seeing each other … and I think as human beings we need that interaction.”

However, it’s still difficult for large groups of people to attend services in person, much less have a full communal experience.

“A lot of people are feeling isolated, especially the elderly who would come to prayer to meet their friends and talk and go have coffee,” said Fariad.

The evening meals are also still absent in their traditional form at many mosques.

“We had a lot of people calling, asking if we’re doing the iftar, and they’re disappointed that it’s not happening,” said Shami.

In the spirit of charity, many centers have continued to make an effort to offer food for community members who are less fortunate. Both the ICCP and ADAMS Center have been packaging meals from various restaurants and offering them via drive thru donations.

“This is the month of charity,” Shami said, and “helping the needy is one of the themes of Ramadan.”

Fariad said only a few dozen people are taking advantage of this service at the ADAMS Center, when they would normally accommodate hundreds of people each day. She said this is likely because congregants attended these meals for the social interaction and not simply for the food. Still, she said it’s an important part of their mission, especially during this season. 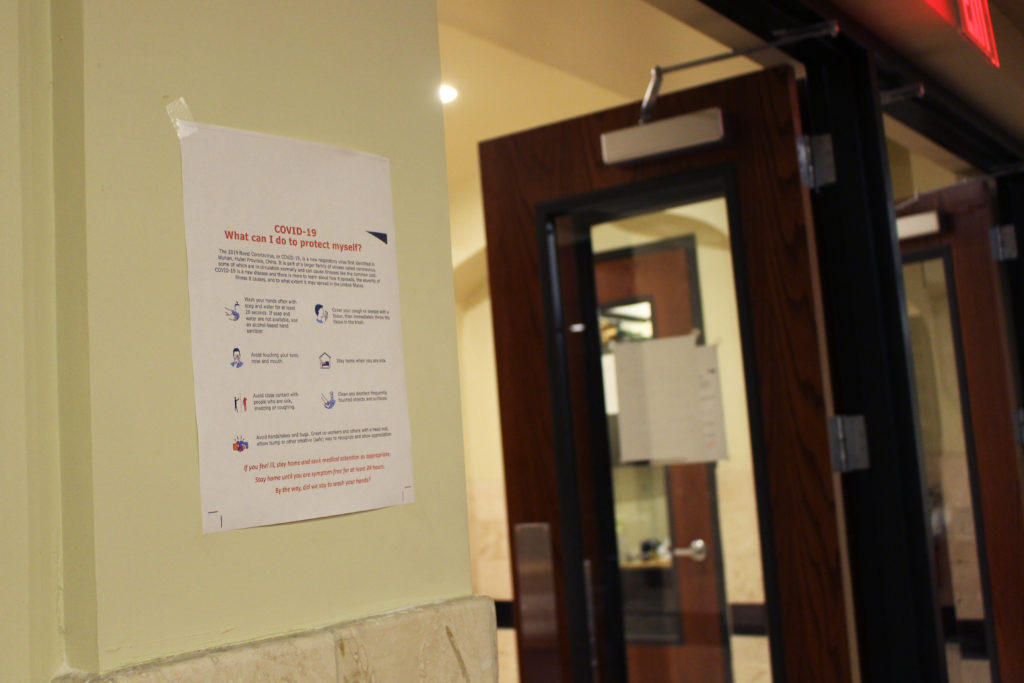 A sign informing observers of COVID-19 safety procedures at the Islamic Community Center of Phoenix on April 29, 2021. Photo by Justin Stabley/PBS NewsHour

“As Muslims, it’s incumbent on us to make sure that we’re not only taking care of our immediate family and community, but the large community that lives around us,” she said. “We’re still connected to them and we’re still responsible for them.”

Just like last year, Rizwan and many other Muslims have found benefits to celebrating the holiday in unprecedented times.

“It’s been nice to have all the kids around at home,” Rizwan said. “Despite all the uncertainty, knowing that they’re here, it’s made things a little bit easier to deal with.”

“I’m really grateful that it’s given opportunities for families to slow down,” said Fariad, who has also spent time celebrating the holiday with her close family. “My kids were home, so that was great that I got to see them more.”

To navigate the remaining COVID restrictions, Farah said some members in the community are holding backyard iftars, and video calling and social media have become the main way to connect with relatives.

“I think I talked to parents and sisters way more than I normally would have … because we had a lot more time on our plate,” Farah said.

Shami said he thinks people are still hesitant to attend social gatherings, even after being vaccinated, and it will take a year or two before people are fully comfortable returning to normal life.

Still, there’s optimism for next year when the spread of the coronavirus is expected to be greatly reduced in much of the United States. Because of this, Quadri said he and other Muslims in his community are looking forward to a time when they can gather like it’s a normal year.

“The spiritual feeling that you get when you go to the mosque is not 100 percent there,” he said. “But still, it’s better than last year. God willing, next year, we’ll do it full swing and get that feeling back.”

Left: A table with face masks and hand sanitizer at the Islamic Community Center of Phoenix on April 29, 2021. Photo by Justin Stabley/PBS NewsHour