Editor’s Note: Thomas Piketty is famous in America for predicting continuing economic inequality, and if you want to get wonky, for a simple formula (return > growth) that explains the persistence of that inequality.

But what does that formula mean? (Watch Paul Solman’s animated explanation.) Abbreviated as R > G, that relationship basically says that what makes a few people rich is growing faster than what makes the rest of us rich.

As Piketty points out, for most of history, the return on capital could be understood as the value of land. Think about Downton Abbey. Lady Grantham doesn’t know what a weekend is because her family never worked. But yet, before the wars anyway, between help from wealthy relatives and the value of Downton, the Granthams were always well-off. Or imagine Jane Austen’s Mr. Darcy. The wealth he reaps from Pemberley Mansion is self-perpetuating. Return on capital, then, is how much you get for every dollar (or pound) that you invest. In the 19th century, and again today, that rate has been high.

Economic growth — the “G” that’s growing much more slowly — is a percentage increase from one year to the next in total output of goods and services in a given country. Today, we measure that output in the Gross Domestic Product. (As author Zachary Karabell recently noted on Making Sen$e, much of the economic growth the GDP measures goes to the wealthy, so it’s not always an indicator of the economic prosperity of average citizens.) 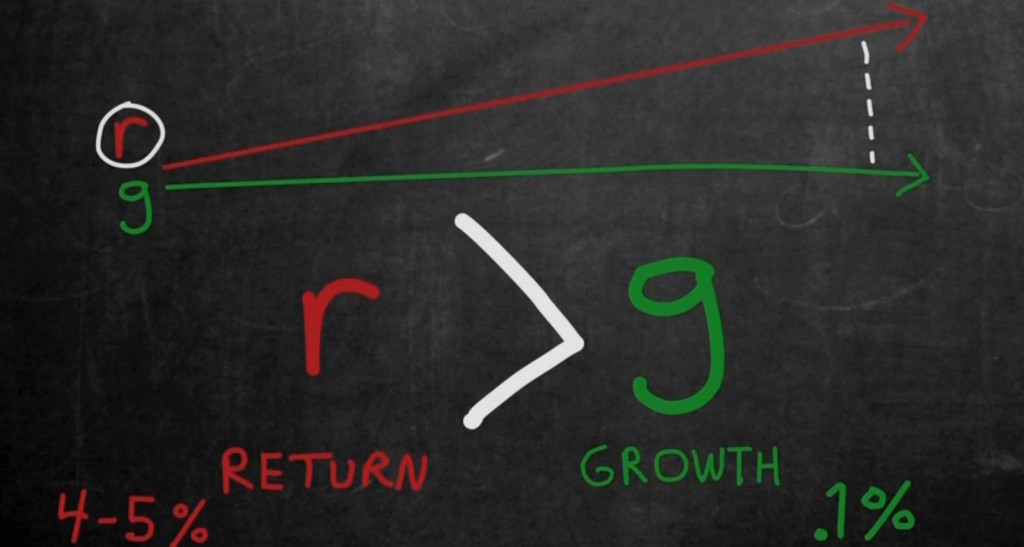 English (or French, for that matter) majors trying to understand Piketty are in luck. The French economist alludes to Victorian literature to explain the high concentration of wealth seen in the 19th century, the post-war blip, and the rise of inequality again today. Read more of that explanation in a condensed and edited excerpt of Piketty’s conversation with Paul Solman below.

Paul Solman: The key to your book, or at least your analysis of inequality, is this relationship between the rate of return on wealth capital and the economic growth rate of a society, right?

Thomas Piketty: Exactly. So the fact that we have this long-run tendency of the rate of return on capital to exceed the economic growth rate is one of the key economic forces that can push toward very high concentrations of wealth and very high inequality. It explains the very large concentration of wealth that we had, not only in traditional agrarian society with a landed aristocracy, but also in the industrial countries of the 19th century up until World War I.

Paul Solman: Is it because the rate of return on wealth (or capital) was so high during these periods or because growth was relatively low?

Thomas Piketty: During most of human history, growth was close to 0 percent because population was stagnating and agricultural productivity was rising very slowly — less than 0.1 percent per year. But the rate of return on capital was typically 4 to 5 percent.

So for instance, if you want 1,000 pounds in annual income, you need 20,000 pounds capital value because 5 percent of 20,000 is going to give you 1,000 return. And this was, in many ways, the basis of society because this is what allowed a class of landowners to live off their wealth and to care about other things than their own survival.

Paul Solman: So this is in almost every Victorian novel. From Jane Austen up through Anthony Trollope, you keep hearing about what kind of an income the prospective bride or groom has. And you don’t hear about a rate of return.

Thomas Piketty: You don’t hear about it because it’s implicit. Everybody knows how you can translate this touch of capital into a flow of income, and it’s completely obvious that the value of a property is typically between 20 and 25 years of annual return, which corresponds in our long range to a rate of return of 4 or 5 percent.

Paul Solman: So when I read Anthony Trollope and he talks about somebody who’s a really good prospect for marriage because it’s an income of 5,000 pounds, all the readers knew that meant the land would be worth 20 to 25 times that because that’s what the rate of return would be on the land?

Thomas Piketty: Yeah, everybody would know that. And if you read any novel by Jane Austen or Balzac, you will see all the time that the novelist will switch from the hierarchy of capital ownership to the hierarchy of income stream and can flow from this cast ownership. They change all the time and no reader at that time would be lost because it was these social forces that really mattered for the deep working of society.

Paul Solman: So capital, being mostly land, gets a 4 or 5 percent return a year. What about growth?

Thomas Piketty: Up until the Industrial Revolution it’s less than 0.1 percent per year — almost 0 percent. So this means that you don’t really need to re-invest much of the return to keep up with growth. You can just consume most of the return and this is what property is here for: you can live off of it and you can do with your life something else than what concerns your own survival.

Paul Solman: So the real payoff was to somehow come by land, and if you grabbed it or the king gave it to you, that was wealth?

Thomas Piketty: That was wealth, and you can perpetuate that through time; the basic structure of society can reproduce itself from one generation to the next. You always have limited mobility – some people dilapidate the wealth or some people manage to access wealth through connections or other means.

The question is, what did the Industrial Revolution really change about the kind of patrimonial society that we have in the novels of Jane Austen? The Industrial Revolution brought a higher growth rate, of course, than the 0 percent growth rate of pre-industrial societies. It went to 1 to 1.5 percent in the 19th century, which makes a big difference for the improvement of living standards. But as compared to a rate of return of 5 percent, which increased to 6 percent with new industrial capital and investment, the gap between the rate of return and the growth rate did not change dramatically as compared to pre-industrial society.

Paul Solman: So there isn’t enough growth to make a change in the relationship?

Thomas Piketty: Exactly. Industrial growth per se was not sufficient to really make this change. There are really only two forces that made a change historically. In the 20th century, you had very unusual shocks that altered this logic. The succession of World War I, the Great Depression and World War II reduced the return to capital to a very low level because of capital destruction, because of inflation, because of taxation to finance the war, and so the rate of return to capital between 1940 and 1945 was not 4 or 5 percent. Sometimes it was negative and it fell to 1 percent or very close to 0 percent.

Then the growth rate after World War II increased enormously. You had a growth rate of 4 or 5 percent per year in the 1950s, 1960s and 1970s in Germany, Japan and France that was largely because of the post-war recovery.

The wars had reduced the very sharp inequalities of wealth of the past. Very high growth rates in the ’50s, ’60s and ’70s made it easier to accumulate wealth and, for the first time in history, there was really significantly higher upward mobility.

Paul Solman: Growth is a function of productivity; how much more efficient we get, right?

Thomas Piketty: And population. So there are two ways to make your GDP rise: you can have higher productivity or higher population (more people working) or both. Historically both have been very important.

Having more people who can work, that comes from immigration and fertility and life expectancy increasing. But this part of growth is now going down.

Paul Solman: Because people are having fewer kids?

Thomas Piketty: Because people are having fewer kids. Growth rates can seem a bit abstract when we talk about them in the media on an annual scale. When we say we have a 1 or 1.5 percent annual growth rate, this is very small. Maybe a more concrete way to understand growth is to look at the level of a generation — over a 30 year period. It’s important to realize that even 1 percent per year, or 1.5 percent per year, means that over a generation, or a 30-year period, you have one-third or one-half of extra output. So this means, in effect, that there is one-third or one-half of the economy that has been renewed.

Thomas Piketty: Yeah, and this also means that you have to upgrade your skills [to keep up]; you have to have an education systems that gives everyone a chance to find a job. This is very substantial growth as compared to previous societies, but this is not enough to counteract the fact that the rate of return to capital earnings can typically be 4 or 5 percent.

Watch Paul Solman’s interview with Piketty about the success of his book in America below.

Left: For most of history, Thomas Piketty explains, the return on the value of land has exceeded economic growth, which helps explain why Victorian characters like Mr. Darcy seem so effortlessly wealthy. Photo by Flickr user Tim Venn.