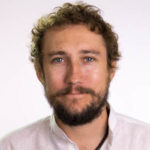 How smoke from California’s fires is harming the most vulnerable

David Ewing wore a bright white dust mask, his face behind it puffy and red, as he sat on a stone bench in downtown Santa Barbara, California. A fine layer of ash covered the pavement at his feet, dirty residue from wildfires ravaging the region.

“When I woke up yesterday I couldn’t breathe,” said Ewing, who is homeless and has been diagnosed with cancer. He spent the previous night sleeping behind a Saks department store. “This stuff is just wiping me out.”

Ewing is among the tens of thousands of homeless in Southern California who are struggling to escape the smoke as wildfires tear through the region. Experts caution against spending time outdoors when it’s smoky, but for many, staying inside isn’t an option.

Smoke from the Thomas Fire, viewed from Santa Barbara on Dec. 5, 2017.
Photo by Doc Searls/Flickr

Wildfire seasons have been growing longer and more severe throughout the American West. Heat-trapping pollution and the effects of weather cycles have pushed up temperatures. Meanwhile, saplings and other fuel for fires has accumulated in forests. That’s stoking blazes that are undermining long-running efforts to clean the air using environmental regulations.

“When we have warm conditions, that tends to draw more moisture out of vegetation,” said John Abatzoglou, a geographer at the University of Idaho who studies climate change and wildfires. “It tends to accelerate the rate at which vegetation dries up and becomes receptive to igniting and carrying fire.”

Smoke contains chemicals from burning rubber and homes. It can also worsen ozone pollution. And it’s filled with tiny particles known as PM2.5, which can lodge inside lungs, trigger coughing, worsen diseases like asthma, and lead to long-term damage including cancer.

Climate change-focused research published in the journal Environmental Research Letters a year ago concluded smoke could send 30 more people to hospitals across the West each year during the late 2040s than was the case 40 years earlier as smoke waves become more frequent and severe, mostly in the late summer and early fall. Some counties were projected to see little or no change. Impacts could be heavy in parts of central Colorado and Washington — and in Southern California.

“The larger the fire, the more people are affected, and the worse the health impacts will be,” said Loretta Mickley, a Harvard University researcher who worked on the study. “It’s just one more consequence of our love of emitting these greenhouse gases. So it’s one more reason to think about, ‘OK, let’s cut these emissions back.’” 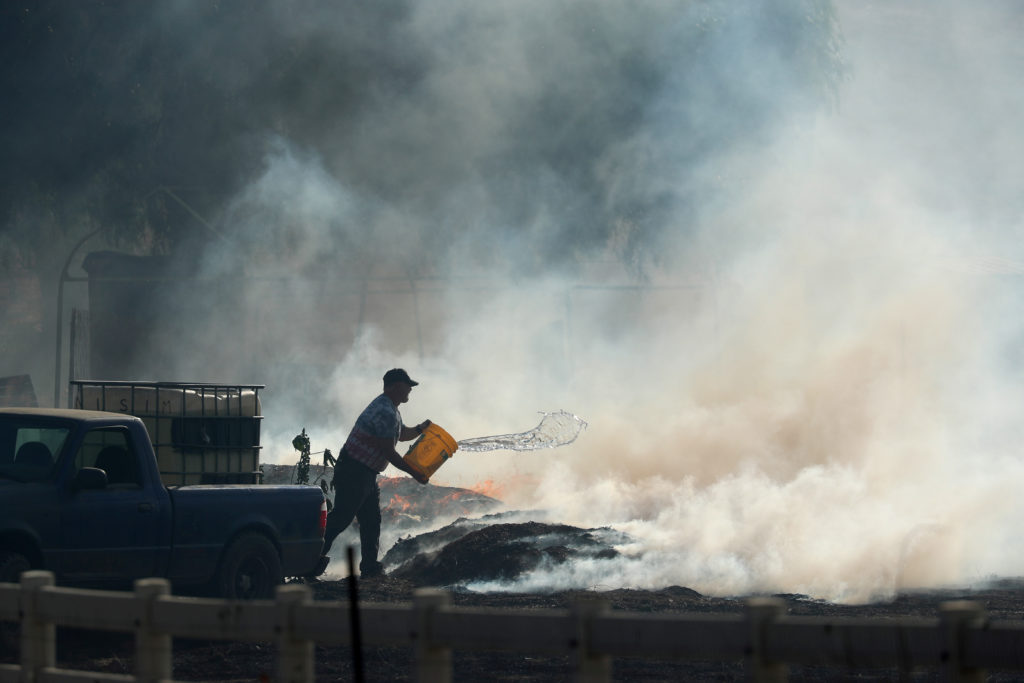 A rancher does what he can to try and put out flames after the Lilacfire, a fast moving wild fire, came through Bonsall, California, U.S., December 7, 2017. Photo by Mike Blake/Reuters

Even a state with some of America’s most rigorous and progressive pollution standards can do little to protect itself. “Our state laws and policies and local efforts are all working to drive down smog and soot pollution,” said William Barrett, a policy analyst in California at the non-profit American Lung Association, which has been providing masks to the Red Cross to give to the needy. “But now with our changing environment, we’re seeing longer and more severe fire seasons and, along with that, greater impacts to air quality.”

As with most pollution, the poorest and frailest are the most vulnerable to smoke waves. A U.S. EPA study of emergency room visits linked to a North Carolina wildfire that burned in 2008 showed health risks from PM2.5 increased in the counties with the poorest residents and with the greatest levels of income inequality.

In California, where a fast-growing population is fueling a housing crisis, officials and non-profits have been working to protect the homeless population, such as by providing masks. Non-profit workers have also been providing masks to farm workers. Homeless people and farm workers can be especially vulnerable because they often have limited access to health care and have trouble sheltering inside when the smoke outside is heavy. 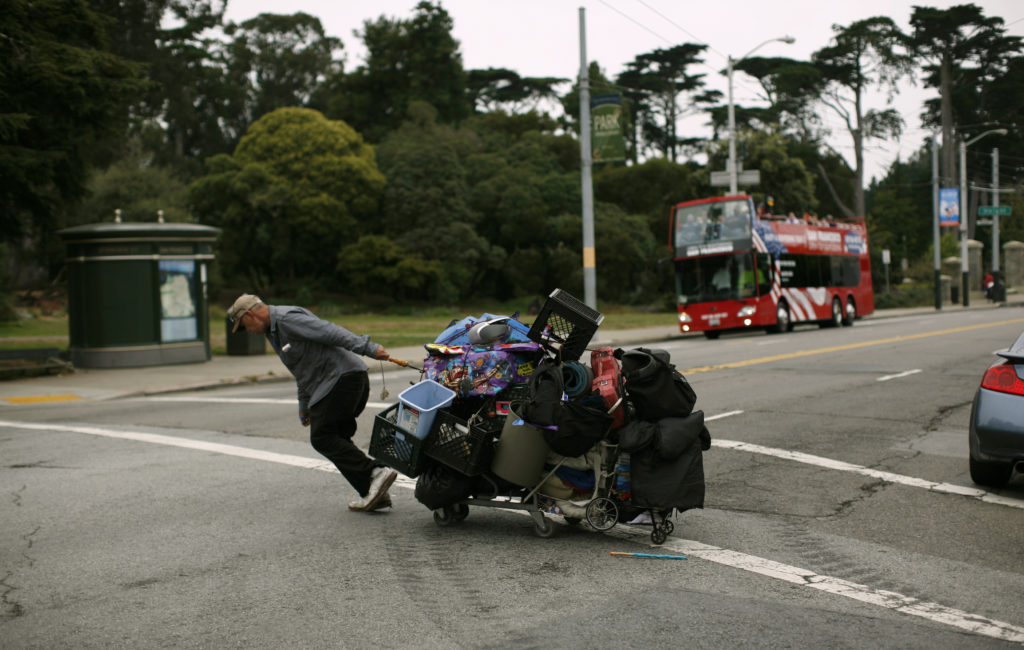 A homeless man hauls his possessions in a shopping cart in the Haight Ashbury neighborhood in San Francisco, California August 22, 2011. Photo by Robert Galbraith/Reuters

Wildfires tore through Southern California this week fueled by hot and dry seasonal winds — called Santa Ana winds — blowing over landscapes left parched by an unusual absence of fall storms. The largest blaze, the Thomas Fire, which raced across the hills of Ventura, was stopped only by the Pacific Ocean after the flames hopped the 101 freeway. At least three others scorched the hills above Los Angeles.

“This is probably one of the worst times I’ve had to deal with it,” said Kevin Ellis, 49, a marijuana farm worker who was walking his gray pit bull next to eerily empty volleyball courts on Santa Barbara’s East Beach on Friday. “It bothers me, I’ve been working in it — I worked 13 hours yesterday — but I’ve got a mask.”

While California’s wildfire trends have in the past been linked to global warming, the fires ravaging Southern California this week have been driven largely by the whims of the weather. “Global warming is there and it’s having an influence,” said Park Williams, a climate and ecology researcher at Columbia University’s Lamont-Doherty Earth Observatory. “But there’s a bunch of other stuff going on too.”

The conditions stoking the blazes in Southern California are projected to become more common and severe in the years ahead as greenhouse gas pollution from fossil fuel burning, deforestation, farming and other industrial practices accumulates in the atmosphere, changing temperatures and rainfall patterns.

As a thick yellow haze filled the air this week, air quality alerts went out warning residents outside of evacuation zones to seek shelter. Winds late in the week were pushing the smoke far up the California coast, over the Silicon Valley and into San Francisco, affecting millions. 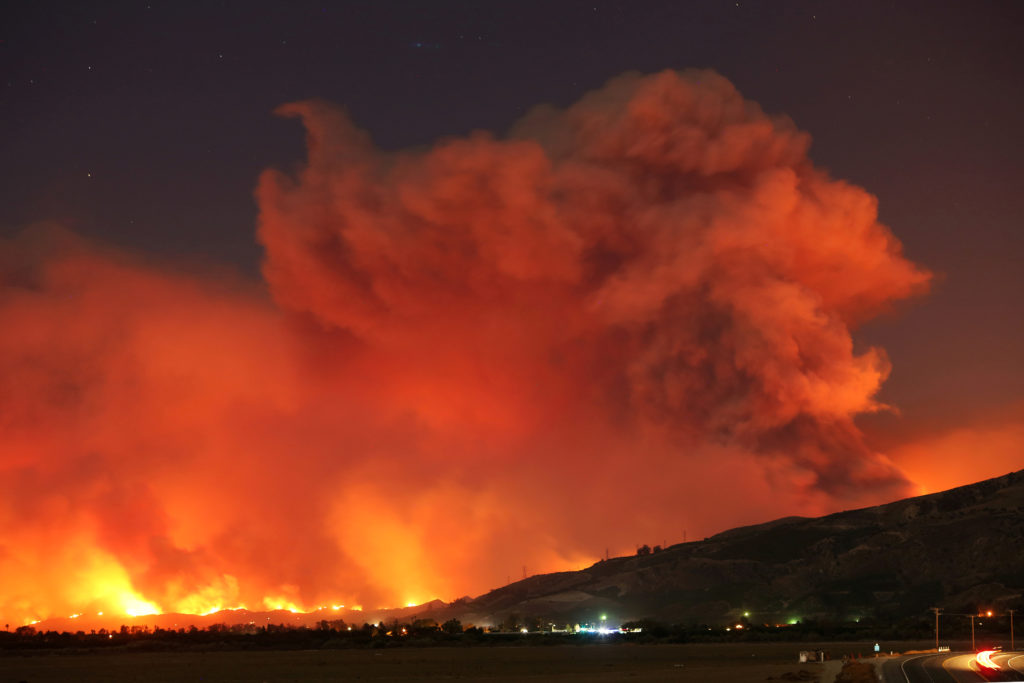 “It’s been very difficult for outpatients to breathe,” said Laren Tan, a pulmonologist at Loma Linda University in San Bernardino County. He tells patients to stay inside as much as possible when smoke waves hit, and to close their windows and use air filters.

But even getting indoors can be a major challenge for the homeless in L.A., one of the only U.S. cities where homelessness is rising. In 2017, the number of homeless people climbed to over 55,000 — up more than 13,000 from the year prior. L.A. also has the largest unsheltered subpopulation of any big city, according to Colleen Murphy, an outreach coordinator for the L.A. Homeless Services Authority.

Since the fires began, outreach teams, which sometimes include medical and mental health professionals, have fanned out across the city to try to get people off the streets and into the city’s shelters or a Red Cross facility. 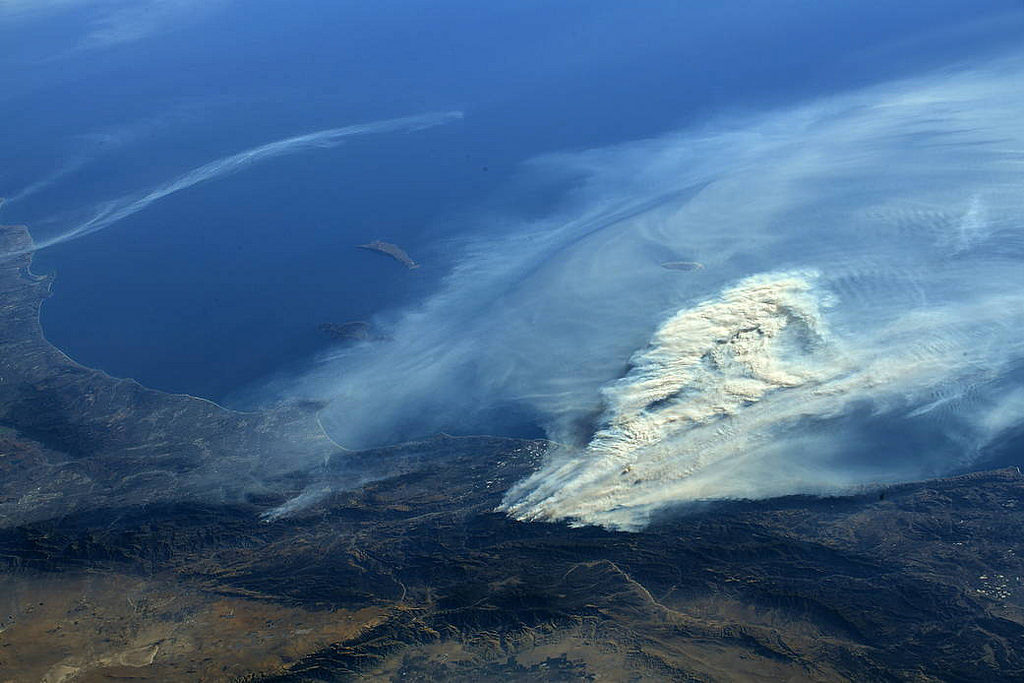 The southern California wildfires could be seen by the International Space Station crew from their vantage point in low Earth orbit. Photo by NASA/flickr

“We’ve mobilized our street teams, because we do get that extra bump of beds available during the winter months,” Murphy said. “We’re trying to let people know, ‘Hey the winter shelters are open, so please let us take you there.’”

In Ventura County, where as of Friday the Thomas Fire had burned 132,000 acres and more than 400 buildings, workers at the transitional living facility operated by county officials were handing out masks. Some of the homeless are turning up at evacuation shelters as well.

The fires have struck Southern California at an unusual time and with rare ferocity, bookending a deadly wildfire season that destroyed neighborhoods and killed dozens in wine country north of San Francisco and filled the sweeping Central Valley farming region with smoke from forest fires in mountains nearby.

The blazes are part of a years-long fiery crisis for the West — one that’s only expected to get worse.

“How much longer are we going to go through this?,” Ewing said, as he sat on the stone bench, his backpack and a large black garbage bag at his feet. “I’m homeless and I have to breathe it all day long.”

This story was produced through a partnership between Climate Central and Pacific Standard and reproduced with permission. It is part of a Climate Central series on wildfire pollution, climate change and public health supported by the Bill Lane Center for the American West at Stanford University. Climate Central also published a research report on this topic.

John Upton is a features journalist at Climate Central.