The COVID-19 outbreak that is rapidly growing across the U.S. could also hinder how many people the U.S. census bureau can reach in its once-a-decade count — and, along with it, how funding is distributed to state and local communities for years to come.

Census officials have said they are on track to deliver the count on time, including for a Dec. 31 deadline for data the government uses to draw congressional districts. Some advocates have called for that deadline to be pushed back.

There are several ways people can file their census data: by phone, mail, or for the first time this year, online. But the bureau has suspended all in-person census surveys until further notice, and has stalled field operations until at least April 15. And those parts of the process, like in-person enumerating, are a key part of accounting for communities in group living situations — such as nursing homes or prisons — or with hard to reach populations, such as the homeless, those without a stable address and immigrants who may fear how the data they share will be used by the government.

On top of the issues created by the coronavirus pandemic, the census is still dealing with some of the challenges it has always faced in reaching immigrant and minority communities, including language barriers, cultural barriers and messaging.

Why is the census so important?

Mandated by the United States Constitution, the decennial census shapes much of public life. The census is used to allocate hundreds of billions of dollars of federal funding for schools, hospitals and programs like the Supplemental Nutrition Assistance Program (SNAP). Getting an accurate count will help determine how much money to distribute into communities.

The census also has significant political impact– it is also used to redraw electoral districts and determines the number of seats each state has in the House of Representatives.

“For us, it’s most important to have resources to provide a good quality of life to our residents,” said Maria De la Luz Garica, director of the census 2020 initiative at the Los Angeles Mayor’s Office.

The Census Bureau began its big push around the survey in March. As the month wore on, a growing number of schools and businesses closed, as state and federal officials encouraged people to stay home.

The bureau’s changes to their operational strategies because of the novel coronavirus affect a small number of people, relative to everyone who will complete the survey. But that small group has been historically difficult to reach.

While 95 percent of Americans receive their census invitation to self-respond in the mail, 5 percent require an in-person census taker.

Garcia and her team have been working for the past three years to focus their census outreach efforts on these “hard-to-count” populations — communities that are difficult to reach or don’t respond to the census for a variety of geographic, economic or social and cultural reasons. This includes groups that are hard to locate, contact or persuade, like short-term renters, homeless people and minorities.

“…It’s hard to reach immigrants, whether it’s because they have limited english proficiency and language barriers, or have anxiety about sharing personal information with the government,” Garcia said, though the census does not share personally identifiable information with other agencies, including law enforcement.

Map: Watch the real-time spread of coronavirus in the U.S.

In their efforts to reach these communities, Garcia’s program trained a little more than 1,000 volunteers from the same neighborhoods where these historically undercounted, or hard to reach people, live.

“We’re training them from those neighborhoods so they can help us be that trusted messenger,” she said.

Between April 9 and May 4, the census was planning to dispatch around 140,000 census workers to camp grounds, marinas, hotels and other places where people may not have permanent addresses. But now due to the delay in field operations, this will be pushed back.The delay also affects counting those in group quarters, like nursing homes and prisons, and the non response follow up, where census takers knock on doors of households that did not self respond to remind them to do so.

Despite years of planning, organizers and city officials like Garcia could not predict a global pandemic impacting their efforts.These volunteers are now on hold because of the coronavirus. Still, representatives from the bureau say they believe that the lack of field operations would not hinder the count. In a statement last week the bureau reminded people that “it has never been easier to respond on your own, whether online, over the phone or by mail—all without having to meet a census taker.”

The census’ real-time response map shows that 38 percent of households have self-reported as of April 1.

Census advocates like Beth Lynk, director of census counts at the Leadership Conference for Civil Rights, echoed the bureau’s message.

“What we’re really focused on is that folks know how easy and important it is to respond, you can do it in your own home online, by mail,” said Lynk, who added that she’s impressed by the innovation of census organizers and advocates in reaching people.

Because of the coronavirus, advocates who have long worked to bring awareness of the census to their communities are changing their canvassing strategies.

While the bureau itself deals with these changes, census advocates who have long worked to bring awareness of the census to their communities are also changing their canvassing strategies. Instead of door-to-door leafleting or tabling, they’re phone banking and putting up fliers at essential locations still open during nationwide quarantines, like supermarkets. They’re also focusing on online outreach, with online happy hours, zoom conferences, posts in Facebook groups, and live streams or video chats.

Despite scaling back its in-person field work and issuing a hiring freeze till April 1st, the Census Bureau is hoping to hire as many as 500,000 workers this year, and has 31,000 employees so far.

The census bureau did not immediately respond to a request for comment on staffing issues. 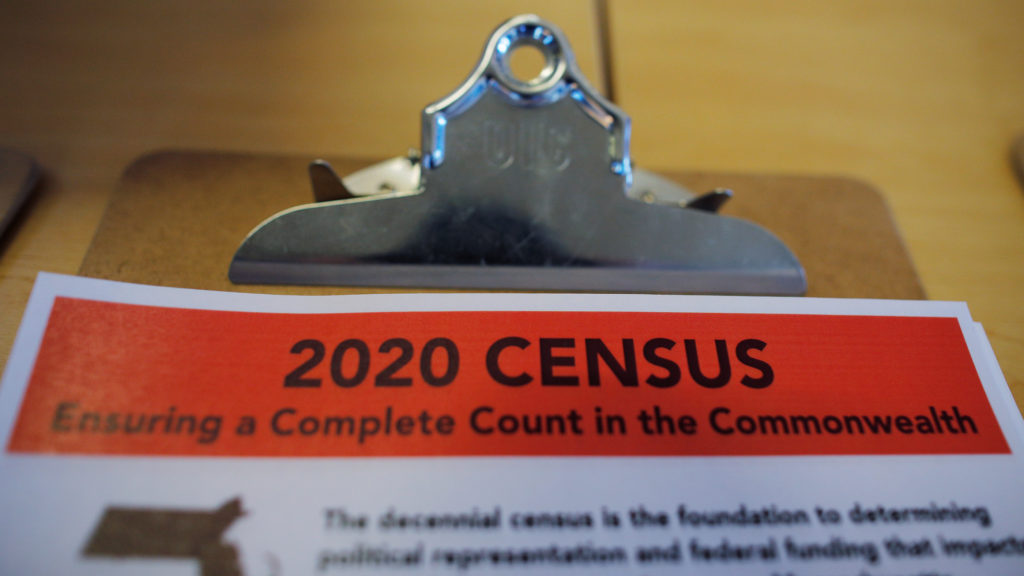 An informational pamphlet is displayed at an event for community activists and local government leaders to mark the one-year-out launch of the 2020 Census efforts in Boston, Massachusetts, U.S., April 1, 2019. Photo by REUTERS/Brian Snyder

While states, cities and municipalities start planning for the census years in advance, the actual self response period began on March 12. From March through August, households can respond via mail, phone or online to the questions. Reminders to self respond go out to households throughout these months.

Along with the decision to suspend field operations until April 15, the bureau delayed its early non-response follow-ups from April 9 to April 23, and suspended all in-person census surveys until further notice. But census advocates said that from the guidance they’ve received, the Bureau is planning on sending out census takers come May 28th, only a few weeks behind their original plans.

The census bureau did not respond to questions about changes to the timeline of the survey.

“As we continue to monitor the evolving COVID-19 outbreak, we will adjust census taker and survey operations as necessary in order to follow the guidance of federal, state and local health authorities,” the bureau said in a statement.

Other challenges with the count

Every person must be counted, citizens and non-citizens included, but it’s not always clear that non-citizens should also participate in the survey. Chan-Smitham said her organization’s research around the census found that less than half of Asians in the U.S. knew that everyone, regardless of immigration status, is meant to be counted.

Other minorities and immigrant communities have similar anxieties. According to the Arab American Institute, there are nearly 4 million Arab Americans, but the U.S. Census Bureau estimates there to be about 2 million. The 2020 census questionnaire lists those from Egypt and Lebanon (Middle Easterners) as examples of those who should be categorized as “white.” Arab Americans have lobbied for years to include a “MENA” category for those from the geographic Middle East and North Africa. The census rejected a petition to add the category in 2018. When asked about the “MENA” category, a spokesperson for the bureau told the PBS NewsHour that the census adheres to the Office of Management and Budget’s standard for race, which does not include this category.

“It’s hard to engage with these communities when you don’t understand their language or have a level of cultural competency.” – Suher Adi, head of the census campaign at the Arab American Institute.

“It’s hard to engage with these communities when you don’t understand their language or have a level of cultural competency,” said Suher Adi, who is leading the census campaign at AAI.

Adi and Chan-Smitham both mention the significance of language and culture. A 2007-2009 survey done by the American Community Survey estimated that roughly one in five Asian American households have limited-English proficiency. And research done by the Census Bureau found that Arabic is one of the fastest growing languages in the country– growing by 42 percent from 2010 to 2017. Among those who speak Arabic at home, 37 percent are not proficient in English. There are also 41 million Spanish speakers in the country and only 40 percent are English proficient.

While the 2020 Census does offer the opportunity for people to respond in 12 non-English languages, there are a multitude of languages spoken in the Asian American community, many of which are not listed by the Census Bureau. Organizations like Chan-Smitham’s and Adi’s are setting up hotlines that provide language support beyond those offered by the bureau

To add to the language barrier, last year the Trump administration attempted to have a citizenship question added to the census. The move was blocked by the Supreme Court, and does not appear on the 2020 census forms, but stigma still exists in immigrant communities about information-sharing with the government.

“In this current political climate there is distrust and confusion,” Chan-Smitham said. But, she flagged that there are strong laws and harsh penalties that protect census information from being shared or exploited. The Census will never ask about people’s social security numbers, their citizenship status, money or donations or personal bank statements or anything on behalf of a political party.

“So much is at stake if we’re not counted,” Chan-Stantham said. “Billions of dollars in federal funding going to hospitals, schools, roads and all sorts of programs and also our political representation is shaped by this … an accurate count is going to get us our share of resources.”