How to plug holes in your Medicare coverage

Editor’s Note: The open enrollment period for Medicare extends to Dec. 7. To help readers navigate this complicated process, Making Sen$e turns to journalist Philip Moeller, who writes widely on health and retirement, to answer your Medicare questions in a new column on this page, “Ask Phil, the Medicare Maven.” Read Phil’s past columns and keep sending your questions.

Phil Moeller is a research fellow at the Center on Aging & Work at Boston College and co-author of “How to Live to 100.” Follow him on Twitter @PhilMoeller or e-mail him at medicarephil@gmail.com.

Medicare supplement policies, also known as Medigap plans, plug some, but not all, of the biggest coverage gaps in Parts A and B of Medicare (which are often called basic Medicare). Basic Medicare covers only 80 percent of most covered services, for example, leaving seniors to pay the other 20 percent. And there is no ceiling on those co-payments, so many enrollees look for other sources of insurance protection.

Medigap policies also can help pay some of the coinsurance and deductibles of Medicare. Past Ask Phil pieces have explained these basics as well as Part C plans (Medicare Advantage) and Part D drug plans.

Medigap plans are offered by private insurers and their purchase is not limited to the annual enrollment period. However, because Medigap plans may influence your open enrollment choices, they should be evaluated as part of your overall Medicare insurance needs.

Also, while in theory you can buy or switch between Medigap policies at any time, the private insurers who sell Medigap policies may not have to do business with you.
Medicare is a so-called “guaranteed issue” product available to all seniors. Guaranteed access to Medigap policies is limited to the period when people first sign up for Medicare. Afterwards, consumers with health problems may not be able to get the Medigap policy they want, or may have to pay more for it due to their health condition. If you already have a Medigap policy it can’t be cancelled on medical grounds. But you may have trouble switching to a new type of Medigap policy.

“If you love playing alphabet soup with the various parts of Medicare, you will be ecstatic with your Medigap choices.”

Some states provide consumer safeguards for better access to policies, so you need to check out the rules where you live before assuming whether you can or cannot get a Medigap policy. Free counseling is offered by the government-funded State Health Insurance Assistance Programs.

If you love playing alphabet soup with the various parts of Medicare, you will be ecstatic with your Medigap choices. There are no fewer than 10 different types of Medigap policies. They are lettered A through N.

How are Medicare Part D plans changing in 2015?

Gold stars if you noted correctly that these actually are 14 letters. Not to worry. Plans E, H, I and J are no longer sold, which brings us down to 10. (Although, if you had one of these plans when they were discontinued, you were allowed to keep it.) Plans D and G were changed after mid-2010 but they stuck around.

Oh, and if you live in Massachusetts, Minnesota or Wisconsin, your Medigap policies are a little different from those in other states. And in some other states, you can get a cheaper Medigap plan called Medicare SELECT. It lowers costs by requiring you to use hospitals and even doctors within a medical network. Medicare provides a ZIP code-based tool so you can find out which types of Medigap plans are offered where you live.

Moving on, Medicare requires each type of Medigap lettered policy to offer the same terms, so pretty much all Type A policies will be the same, regardless of which insurer sells them. The key, then, is to determine which of the 10 plans best meets your health and pocketbook needs. Not surprisingly, the plans that cover the most also cost the most. But the plans that cover most of your needs might not. Here are the major provisions of the different policies in Medicare’s 2015 Guide to Medicare: 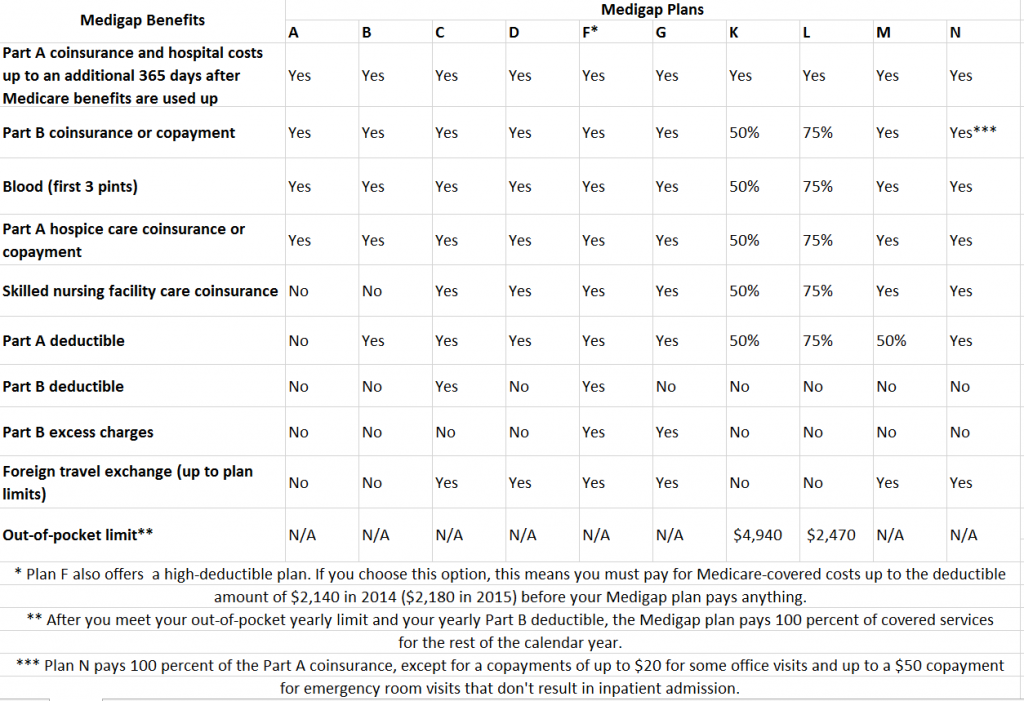 About 10.5 million people had Medigap policies at the end of 2013, according to Tricia Blazier, product manager at Allsup Medicare Advisor, a fee-based consulting company that helps consumers with their insurance choices. Type C and F plans are known as “first dollar” plans because they may cover all or nearly all of your medical expenses that are not paid by Medicare. Type F plans provide the broadest coverage for most people and have more than half the Medigap market. Type C plans are about an eighth of the market, with smaller shares for the rest.

While Medigap plans offer standardized coverage, private insurers are free to charge their own rates. “Premiums vary widely, even for plans of the same type,” Blazier says. And each geographic market can be different. Allsup offered to do a detailed look at one market and, vaudeville lover that I am, I picked Peoria, Illinois. Monthly premiums for those popular Type F plans just in Peoria ranged this year from $118 to $262! And for all 10 plan types, the monthly premium range in Peoria was $30 to $318.

More than 300 insurers around the country issued Medigap policies in 2011, according to a report from the National Association of Insurance Commissioners. Premiums totaled $21.4 billion and companies paid out about 80 percent of this amount in direct claims totaling $17.1 billion. UnitedHealthcare, with $6.1 billion in 2011 Medigap premiums, had 28.4 percent of the market – more than five times the business of the next largest Medigap insurer.

“The Midwest, by the way, is the closest thing to heaven that a Medigap insurer can find.”

The Midwest, by the way, is the closest thing to heaven that a Medigap insurer can find. In 2010, about half of all Medicare beneficiaries in Iowa, Kansas, Nebraska and North Dakota had Medigap policies, and a whopping 75 percent of all sales were for Type F plans.

I’m a big believer in informed consumers being able to make solid decisions on their own. But this may be one instance where it makes sense to find a good insurance agent who specializes in health plans. Medigap plans complement not only basic Medicare (Parts A and B) but employer-provided health insurance for retirees and possibly other plans as well. Also, provisions of Medigap policies can be affected by state laws.

Packaging all these needs into the best insurance package is not easy. You can pay up to several hundred dollars if you use a consultant. If a licensed insurance broker helps you, keep in mind that his or her commissions can hinge on the private policies you buy.

Left: If you love playing alphabet soup with the various parts of Medicare, you will be ecstatic with your Medigap choices, says Phil Moeller. Photo by John Moore/Getty Images