Food shortages, damaged homes, fear of death, loved ones leaving. The cumulative stresses of Hurricane Maria contributed to thousands of schoolchildren developing symptoms of post-traumatic stress disorder, or PTSD, in Puerto Rico, according to a study published Friday.

The study in JAMA Network Open found that 7.2% of the students reported “clinically significant” symptoms of PTSD. More girls tended to show signs of PTSD than boys.

Researchers surveyed 96,108 public school students five to nine months after the 2017 hurricane. The cohort included youth in third through 12th grades across different regions of the island.

That just speaks to how big Maria was, how destructive Maria was island-wide. And it didn’t matter what your income was or your location was on the island — you were affected.

The Puerto Rico Department of Education — which partnered with the Medical University of South Carolina for this study — is using the data to target areas with the greatest need for mental health services, the study said.

Maria, which struck the island as a Category 4 hurricane in September 2017, killed an estimated 2,975 people within the American commonwealth. Residents struggled to access clean water and some remained without electricity nearly a year after the storm.

It had dramatic effects on the students. Nearly 46% said their home was damaged. More than 32% experienced shortages of food and water. And roughly 58% reported they had a friend or family member leave the island. The effects did not vary based on where the students lived or their families’ income.

Rosaura Orengo-Aguayo, a clinical psychologist at the Medical University of South Carolina and the study’s lead author, said the findings show the breadth and indiscriminate nature of the devastation.

“That just speaks to how big Maria was, how destructive Maria was island-wide,” she said. “And it didn’t matter what your income was or your location was on the island — you were affected.”

Similar problems have been reported among children in other parts of the Caribbean also affected by hurricanes in 2017.

Congress is at a stalemate in passing an aid bill that would send more resources to Puerto Rico and other areas affected by natural disasters. President Donald Trump has expressed his reluctance to provide more money to the island. 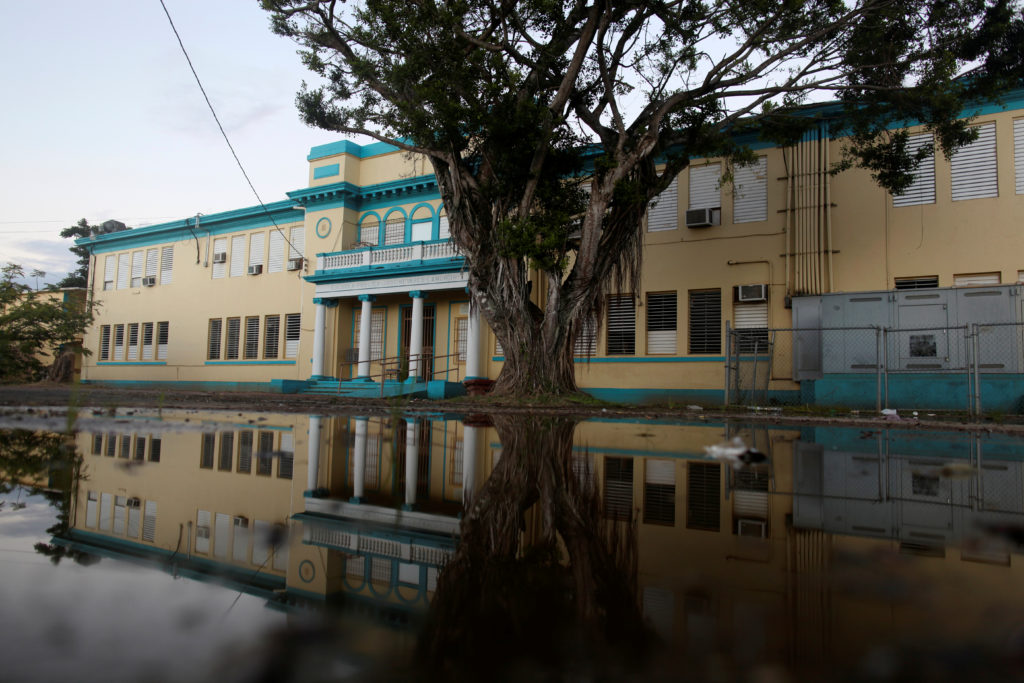 A shut-down elementary school is reflected in a puddle of water in Toa Baja, Puerto Rico, on February 5, 2018. Photo by Alvin Baez/Reuters

The trauma caused by a natural disaster can manifest itself in a variety of ways, said Frank Zenere, district coordinator of the crisis management program at Miami-Dade County Public Schools, who was not associated with the study. Family units can break down through divorce or domestic violence, he said. Young children can revert to thumb-sucking or wetting the bed. Teens sometimes try to exert control by acting out or turning to drugs to self-medicate.

To be sure, Zenere said, most people who survive a natural disaster do not develop long-term mental health conditions.

“They’re distressed by it. It has impact on their life — yes,” said Zenere, who helped coordinate mental health efforts in Puerto Rico in Maria’s aftermath. “But the great majority are not going to develop psychiatric illness.”

Zenere said the differences by gender found among students reporting symptoms of PTSD align with existing literature — boys are more likely to act out, while girls are most likely to show depression and anxiety.

The study’s authors said the loss and disruption caused by Maria contributed about 20% toward the youth’s symptoms of PTSD. While the researchers did not measure what other circumstances played a role, Orengo-Aguayo said, other “protective factors” — like eventually securing basic needs and community support — influence resiliency.

Notably, Orengo-Aguayo said, the level of PTSD symptoms reported in the study is lower than what was expected. Some studies show up to a third of children will develop chronic symptoms after surviving a natural disaster, the authors wrote.

Familial ties or the fact that the study was conducted several months after the storm could have played a role in the children’s resilience, she said. Or the children might still be attuned to trying to survive.

“What we might be seeing is that children at that stage were still focused on getting access to basic needs,” she said.

Regan Stewart, a clinical psychologist at the Medical University of South Carolina and a study co-author, said the team has secured two grants from the federal Substance Abuse and Mental Health Services Administration to continue work on the island for at least three more years. It plans to use telehealth to expand access to mental health services and train school staff and mental health professionals on trauma-focused interventions.

However, public schools in Puerto Rico are burdened by economic constraints. The island — already facing a budget crisis — closed 300 schools over the past two years due to a lack of enrollment exacerbated by Hurricane Maria.

Zenere said school staff members are among those who need to be cared for first, “because they’re going to be the glue that keeps it together for that classroom of 20 children or so.”