“They’re not ‘okay’ and we want to talk about how not ‘okay’ they are,” said Bonilla, who is from Puerto Rico and an associate professor of Latino and Caribbean studies at Rutgers University.

With sleepless nights and anxiety exacerbated by President Donald Trump lashing out at a public official who begged for help, Bonilla and other Puerto Ricans on the mainland are navigating unique traumatic experiences. As they wait to hear about whether their families are in danger and when they hear about the circumstances, their reactions can range from sadness, helplessness, anguish and survivor guilt to anger or depression.

“We feel guilty that we’re not there experiencing what our family members and their kids are experiencing,” she said. “Everyone I know here is completely sleep-deprived.”

There are an estimated five million Puerto Ricans in the mainland United States, many of whom have families on the island but have yet to hear from them. The hurricane wiped out power across the island, which might not be fully restored for a year. Many people, especially those outside major cities, have been without food or water since the storm.

On Saturday, Trump criticized San Juan Mayor Carmen Yulín Cruz for “poor leadership” after she spoke of devastation and “horror” on the island in the aftermath of Hurricane Maria and pleaded for help and support from the federal government.

And when Lt. Gen. Jeffrey S. Buchanan, the Department of Defense’s primary military liaison with FEMA, toured the damage in for the first time just hours later, he told the NewsHour, “this is the worst I’ve ever seen.”

Bonilla said she feels fortunate because her mother has a landline that remained intact and she was able to hole herself up in a safe room in the middle of their home in San Juan with a D battery, a radio, water and snacks in case she became stranded.

“She was fully dressed in case she had to run out in the middle of something. She didn’t want to get caught in her pajamas,” Bonilla said, and she was also wearing a whistle “in case she fell and had a stroke, she could signal for help.”

Her mother survived, but emerged to a humanitarian crisis on an island that now has little clean water, electricity, money or food, to people growing desperate and stealing generators and other belongings and the smell of waste and animal carcasses rotting on the streets.

Bonilla started to choke up when she described her mom as a “warrior,” who has survived breast cancer and open-heart surgery and uses a pacemaker.

Bonilla said she has started to feel more of a connection to the Black Lives Matter movement and to black communities that struggled in the aftermath of Hurricane Katrina in New Orleans. Before now, it was a movement she supported but did not feel any personal connection to.

“That need to say that our lives matter,” she said. “I really connected to those phrases, ‘stop killing us, stop letting us die.’”

She bought a ticket to the mainland on every airline for her mom until she finally made it on Friday, packed as if she is not returning. 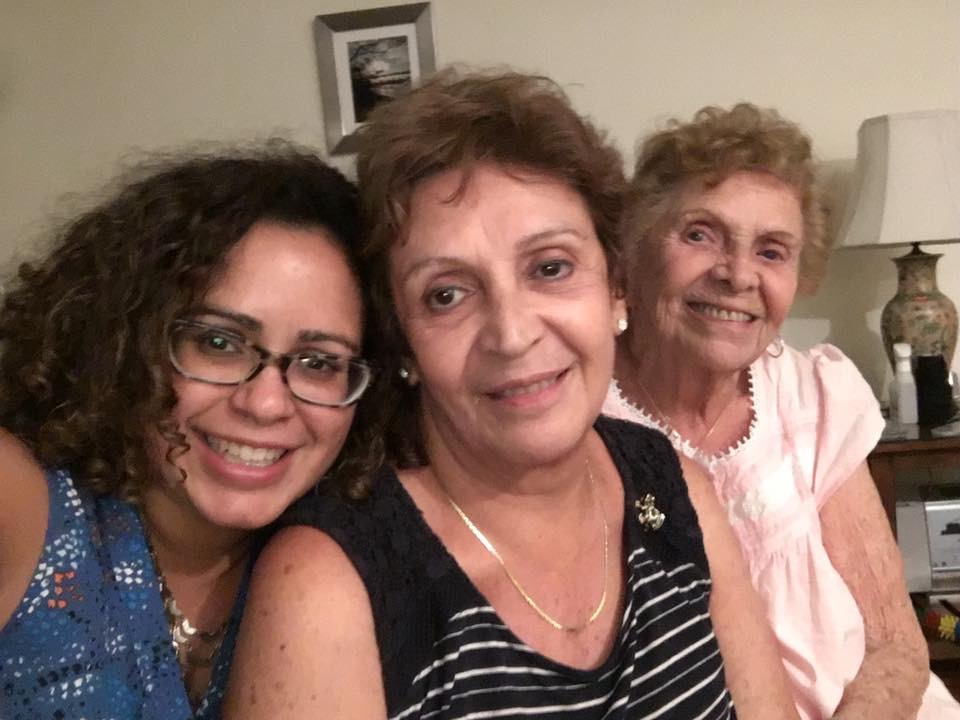 It’s too soon to tell whether such reactions will lead to prolonged mental health issues. Psychiatrists say that generally, only a small percentage of people exposed to trauma develop long-term repercussions and that they can vary, depending on the severity, the person who is experiencing it and the access to help that they have.

But in the 12 years after Hurricane Katrina, psychologists at the American Psychological Association found that nearly half of survivors developed anxiety, depression or another mood disorder, and rates doubled for suicide and suicidal thoughts. The association’s report, released in March, also said that one in six met the diagnostic criteria for Post-Traumatic Stress Disorder.

Psychologists have since recognized the need for immediate mental health aid after natural disasters. The Texas Psychological Association, for example, has set up a network of more than 100 psychologists who are volunteering their time to help people cope with the aftermath of Hurricane Harvey.

Dr. Rebecca Hamlin, who co-chairs the association’s disaster resource network, said most often people just need to talk to someone without fear they are forcing someone else to relive the experience.

“Sometimes, it means just being able to talk about their experiences overall,” Hamlin said. “Some people just need to hear, ‘You’re not going crazy. You’re having a typical response,’”

But this type of grassroots network has not been established as part of the aid response to Puerto Rico, neither for the survivors on the island, who are almost entirely off the grid, nor for the families waiting in angst on the mainland. 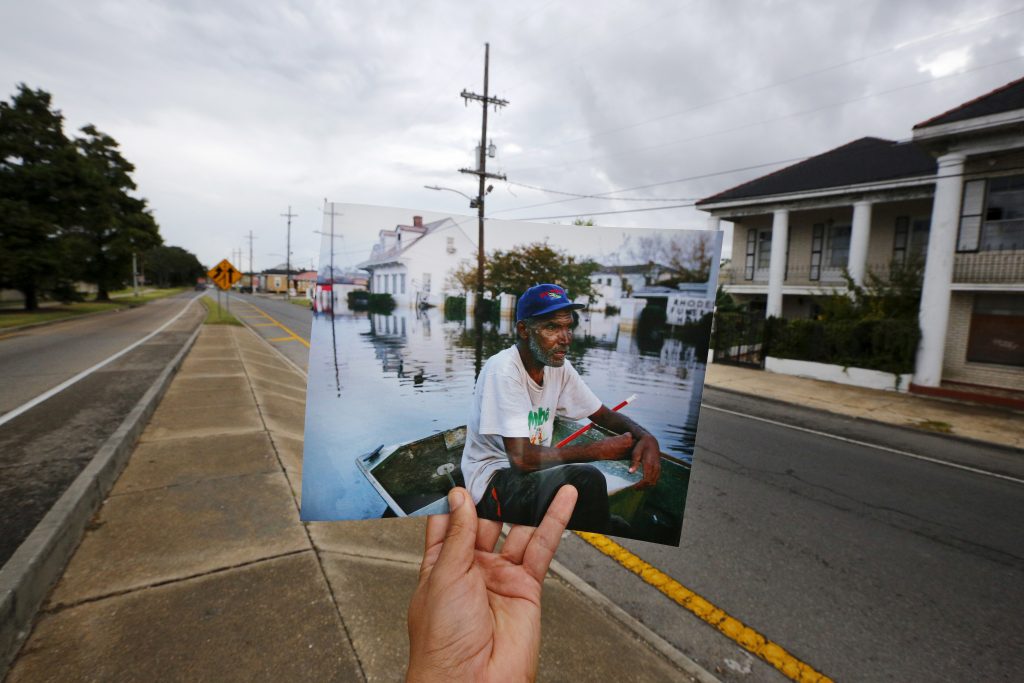 Photographer Carlos Barria holds a print of a photograph he took in 2005, as he matches it up at the same location 10 years on, in New Orleans, United States, August 16, 2015. The print shows Errol Morning sitting on his boat on a flooded street September 5, 2005, after Hurricane Katrina struck. Photo by Carlos Barria/Reuters

Susan Clayton, professor and chair of psychology at the College of Wooster, compared the response Puerto Rico is getting from the federal government to New Orleans in 2005. She said that a feeling of neglect among disenfranchised communities could make some individuals even more vulnerable to trauma.

The unevenness of how communities or even neighbors are affected by natural disasters as well as the flow of resources can be a major source of strain, Clayton said, and she will be paying close attention to the mental toll Maria takes. 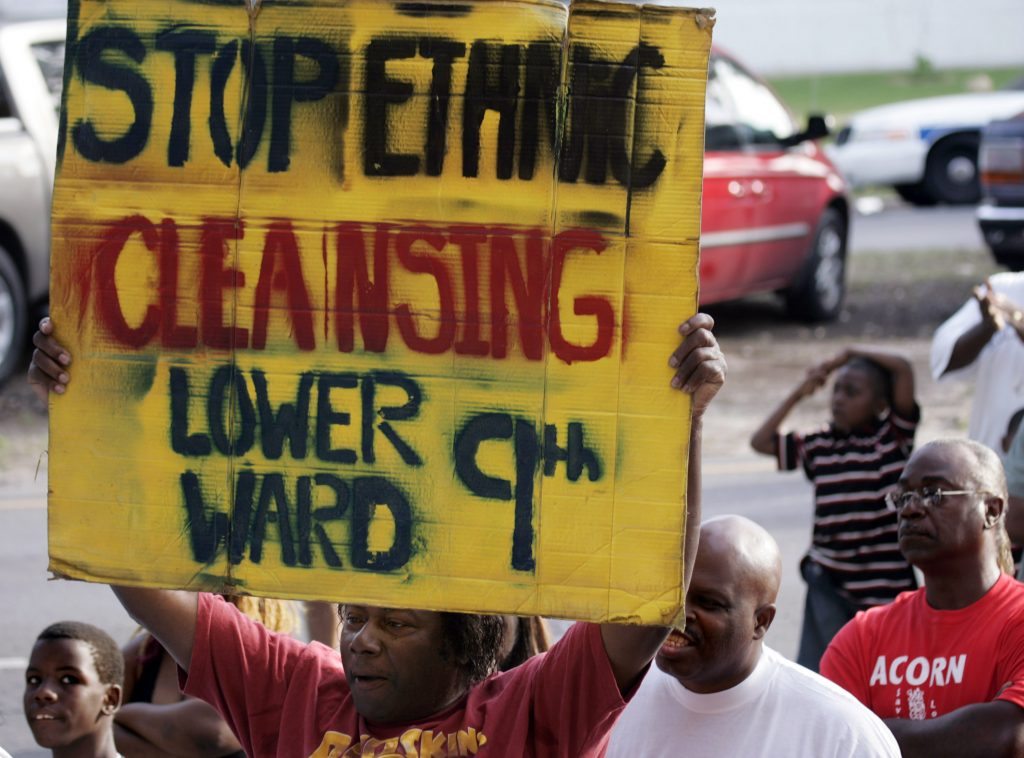 Robert Richardson, a resident of the Lower Ninth Ward, holds a sign during a rally, calling for the rights of residents displaced by Hurricane Katrina to return and rebuild their homes, in New Orleans April 28, 2007. Photo by Lee Celano/Reuters

“It’s really too soon to tell. There might be strong community bonds but there might also be a sense of being ignored or overlooked,” she said. “And of course there was also the sense that there might have been a racial component.”

Clayton, a lead author on the American Psychological Association’s report, said she hopes these impacts will become better researched and discussed as more extreme weather events are provoked by climate change.

Dr. Carol North, a crisis psychiatrist with the O’Donnell Brain Institute at UT Southwestern, said that reassurance, support and spending time with loved ones are all part of an approach to disaster response called psychological first aid.

“Another thing is that sometimes people can be helped by a mild sedative, because you feel a lot better if you can sleep,” North said.

Bonilla said she has a strong community in the mainland who are in constant contact online, in person and through social media networks, but she is still working on sleeping.

“One night I was talking to my friends and was asking, ‘Does anyone have like a Valium?’” she said, laughing. “One of them told me to just take a Benadryl, that’s a poor man’s Valium.”