Hurricane Maria’s official death toll is 46 times higher than it was almost a year ago. Here’s why

For months after Hurricane Maria devastated Puerto Rico, the official death count remained at 64 lives lost to the storm.

That changed this week when Puerto Rican governor Ricardo Rossello substantially raised the official estimate to nearly 3,000 deaths related to the hurricane, following the release of a commissioned, independent study from George Washington University.

“This is unprecedented devastation,” Gov. Ricardo Rossello said, following the release of the new figure, according to CNN. The governor cautioned that the number could change as officials continued to investigate the hurricane-related deaths.

Puerto Rico governor: "The focus shouldn't be, you know, 'hey, let's blame all these folks.' The the focus should be, 'who is going to be accountable and who is going to take the action so that this doesn't happen again.'" https://t.co/fgsbSepxgi pic.twitter.com/C9Bp0Qc3FV

Even before the official death toll count was revised, advocates and politicians were skeptical about the government’s data on deaths that resulted from Hurricane Maria. A number of news outlets launched their own estimates, and researchers used several different methodologies to reach conclusions, too. Despite discrepancies among the estimates, they all pointed to the same conclusion: Far more than 64 people died from this storm.

“If we undercount, we’re just saying nothing happened,” said Alexis Raul Santos, a demographer at Pennsylvania State University who worked on one such study last year. “And that certainly wouldn’t help if you’re going to make the case for additional resources.”

Here’s a closer look at all the different estimates of the death toll count and why, for the longest time, they didn’t match the official post-hurricane count.

A look at the numbers 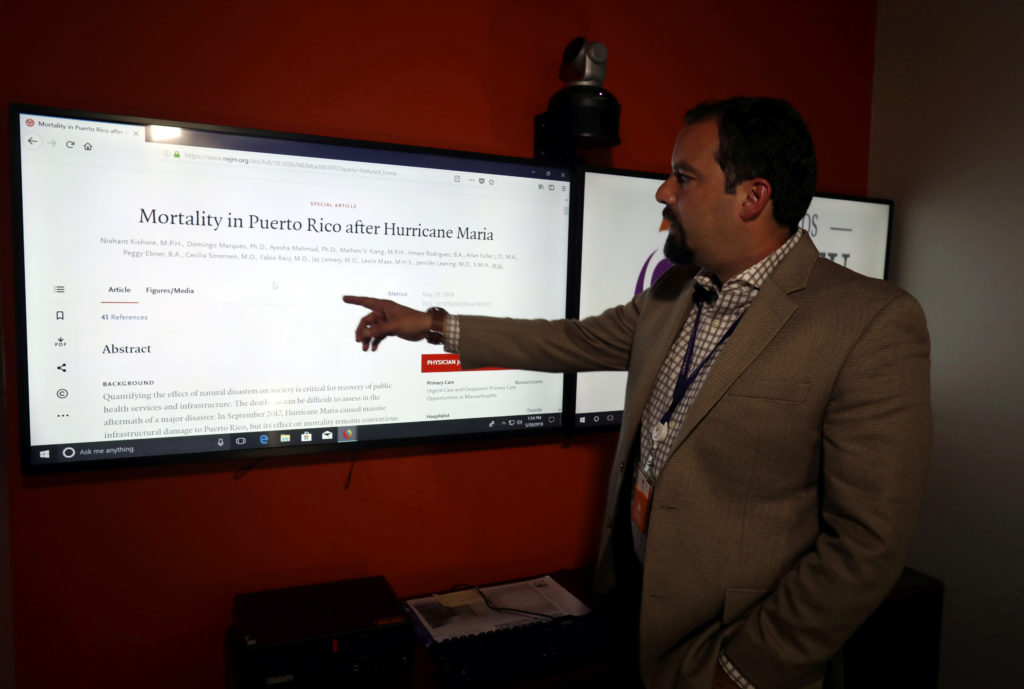 Domingo Marquez, associate professor at the University of Carlos Albizu and member of a research team led by Harvard University, talks to Reuters about Hurricane Maria claiming the lives of 4,645 people and not the 64 long pegged by the island’s government as the official death toll, in San Juan, Puerto Rico. Photo by Alvin Baez/Reuters

Santos, who has been studying Hurricane Maria’s impact on the U.S. territory, was part of the first formal effort to better tally the number of deaths that followed the storm. He also asked Puerto Ricans, in the months after Maria made landfall, about the quality of the government-provided information after the hurricane made landfall.

Here’s a look at all of the different estimates, in the order in which they were released:

Up until GWU’s study, several of the studies relied on publicly available information, which started to thin after officials stopped sharing mortality data beyond December. The Harvard study noted that the Puerto Rican government denied their request for mortality data past that point.

GWU researchers appeared to have greater access to data, resources and personnel within the government who could answer questions, something likely not available to other independent researchers.

Why the discrepancies among the numbers?

After Hurricane Maria, experts grew increasingly concerned over how officials were recording the deaths when the Puerto Rican government’s death toll count stayed at 64.

Santos said ever since Hurricane Hugo hit Puerto Rico in 1989, killing 61 people, “the CDC has been telling governments that death tolls are not only limited to drownings, and other direct deaths, but deaths that wouldn’t have happened under normal circumstances,” Santos said in an email.

In short: There needed to be better, more careful accounting of fatalities that occur during and after a disaster.

Unlike “direct deaths” that occur during a hurricane — such as a death from flying debris or flooding according to the CDC — there are also the indirect deaths that result from a lack of access to hospitals or medical supplies, especially in the far-flung or low-income neighborhoods on the island, Santos said. Puerto Rico’s power grid was also severely damaged by the storm, creating what some called the “largest blackout in American history,” which could have also contributed to some “indirect deaths.”

It should be noted that there isn’t a national standard for counting the deaths related to disasters, although the CDC’s guidelines do exist.

The newest death count, provided by GWU researchers, pointed to “inadequate preparedness” among medical personnel to properly classify hurricane-related fatalities on death certificates and among the Puerto Rican government for not provided sufficient training for the hurricane season. These factors partly contributed to the “the perceived transparency and credibility of the Government of Puerto Rico,” the study said.

Researchers also noted that “key leader interview respondents,” including physicians, different community leaders, emergency responders, funeral directors, thought the death count ought to be higher and believed “government leadership was disconnected from the realities of Puerto Rican communities, that there not transparency in reporting, that information was intentionally withheld to evade blame and that adequate systems were not in place to track the death count.”

The fight for more information

Earlier this summer, the Puerto Rico Institute of Statistics, PRIS, sued the island’s health department and demographic registry for better and more frequent data on the number of deaths after the storm.

Despite the heightened calls for greater transparency, officials declined to release the information, saying it needed to be thoroughly reviewed.

Now, it seems the fight over this mortality data is drawing to a close.

On Thursday, PRIS announced that demographic registry has begun to comply with its transparency concerns and anticipates closing the lawsuit as early as next week.

PRIS’ board of directors had wanted a daily, open-sourced dataset that provided more comprehensive mortality data, including information on the specific causes of death, the month of the death, the type of death, among other personal, biographical information for each registered death.

PRIS said the health department agreed to update the dataset on a weekly basis instead, provided there isn’t an emergency.

“Mortality statistics from the Department of Health take a long time to prepare and publish,” Mario Marazzi-Santiago, the institute’s director, said in a statement. “The newly published data help to perceive mortality in the short-run, without the extensive protocol required by official statistics,” adding that these actions will help the island be “better prepared to respond more quickly to the mortality that could occur after the next hurricane.”

Marazzi-Santiago also said this data will be available if there’s a blackout on the island.

“This disclosure literally saves lives. It is the least we can do to recognize and honor the memory of the thousands of people who died on account of Hurricane Maria,” he added.

President Donald Trump, whose administration has been heavily criticized for its response in the wake of the storm, has not publicly commented on the latest estimate.

Following GWU’s study, Gov. Ricardo Rossello said the government would create a registry of vulnerable people, such as the elderly and the sick, ahead of future storms. This year’s hurricane season started in June.

Nearly a year after Maria hit Puerto Rico, the island has yet to fully restore its power.

As noted by the Associated Press, GWU’s study didn’t include its methodology. The study has yet to be published in a scientific journal, which often requires peer review.

The researchers said that additional research was needed — through interviews with family members, among others — to assess how the impact of the hurricane on each individual death. This is part of GWU’s hope for a second phase for the study.

Left: Graves destroyed during Hurricane Maria in September 2017, are seen at a cemetery, in Lares, Puerto Rico. Photo by Alvin Baez/Reuters