Why more than 1,000 deaths are missing from Puerto Rico’s official death toll

“If you don’t get away from those areas, you are going to die.” That phrase concluded Puerto Rico Secretary of Public Safety Héctor Pesquera’s press conference before Hurricane Maria.

Three months after the storm, he is one of the fiercest protectors of the official death count. As of Dec. 29, the Department of Public Safety had certified 64 deaths due to Hurricane Maria.

However, estimates reported by CNN, The New York Times and others tell a very different story.

I was part of the team of demographers that developed the first independent estimates of excess deaths, with the objective of informing the public. Like the estimates published by those media outlets, our numbers contrasted significantly with the official figure. The most shocking results from our study suggest that deaths in September and October were 25 percent above the historical patterns – with about 1,085 added deaths following the hurricane.

Determining the number of excess deaths after a natural disaster is not only a mathematical exercise. Undercounting deaths reduces the attention to the crisis Puerto Ricans live day by day. It can also delay international recovery efforts and the approval of policies to help those who need it the most. 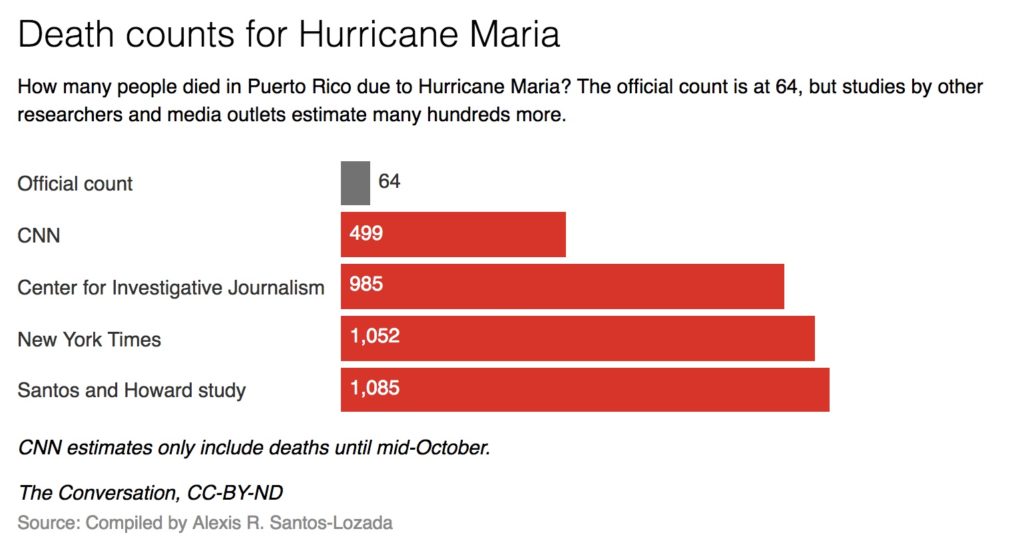 Chart by The Conversation

Our study compared preliminary data from the Department of Public Safety with historical patterns for the same months in the past decade. In other words, we compared the number of deaths in September and October last year with data from the same period of time in 2010 to 2016. This is how we concluded that there were 1,085 extra deaths, in excess of historical ranges.

So why are more than 1,000 deaths missing from the official count? My colleagues and I suspect it may come down to how deaths are recorded by government officials.

In Puerto Rico, deaths are recorded using international classifications. This system doesn’t capture all of the circumstances surrounding a death that happens following a natural disaster. The death may have been accelerated by some conditions – like difficulty communicating during the emergency.

Deaths associated with a particular natural disaster can be classified as direct or indirect deaths. According to the Center for Disease Control and Prevention, direct deaths are those “directly attributable to the forces of the disaster or by the direct consequences of these forces, such as structural collapse, flying debris or radiation exposure.” 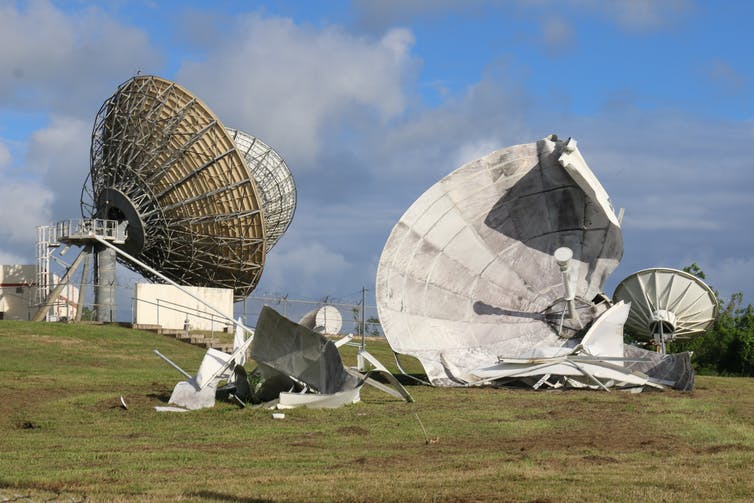 “Indirect deaths” may be associated with any unsafe or unhealthy conditions before, during and after the natural disaster.

For example, Hurricane Maria destroyed Puerto Rico’s power grid. So, someone whose life depended on a dialysis machine would no longer be able to use one. In official certificates, their death would be classified as kidney-related and not attributed to the hurricane – even though the death was accelerated by lack of resources required by the patient to stay alive.

The same would happen to someone whose life depended on respiratory aid. Their death would be classified as pulmonary-related.

Or, say a person feels chest pain and suspects a heart attack. Their immediate reaction might be to call 911. A working communications structure may be able to get help in time and save a life. But in the days following Hurricane Maria, only 25 percent of the cellphone towers were working. Communication was virtually impossible.

Under the international system, a death resulting from these circumstances would be classified as a result of a cardiovascular conditions, and would not be attributed to the hurricane either.

In light of the mounting evidence, Governor of Puerto Rico Ricardo Rosselló has ordered a review of the causes of death for those who died after Hurricane Maria.

The review is a step in the right direction. But will the official count change? Probably not. As of today, the government is requiring families to visit the Department of Public Safety and to report if a death was related to Hurricane Maria. But merely revising the causes of death is not enough to determine whether that death was indirectly related to Hurricane Maria. Those in charge of the death count review will need to interview families and ask them about the conditions surrounding the tragedy.

Following the impact of hurricanes Harvey, Irma and Maria, the CDC published guidelines that state and territorial governments should follow to determine if a death is related or not to a specific event. Following these guidelines could provide the government of Puerto Rico with a more realistic death count. It remains to be seen if the new count will follow this protocol. 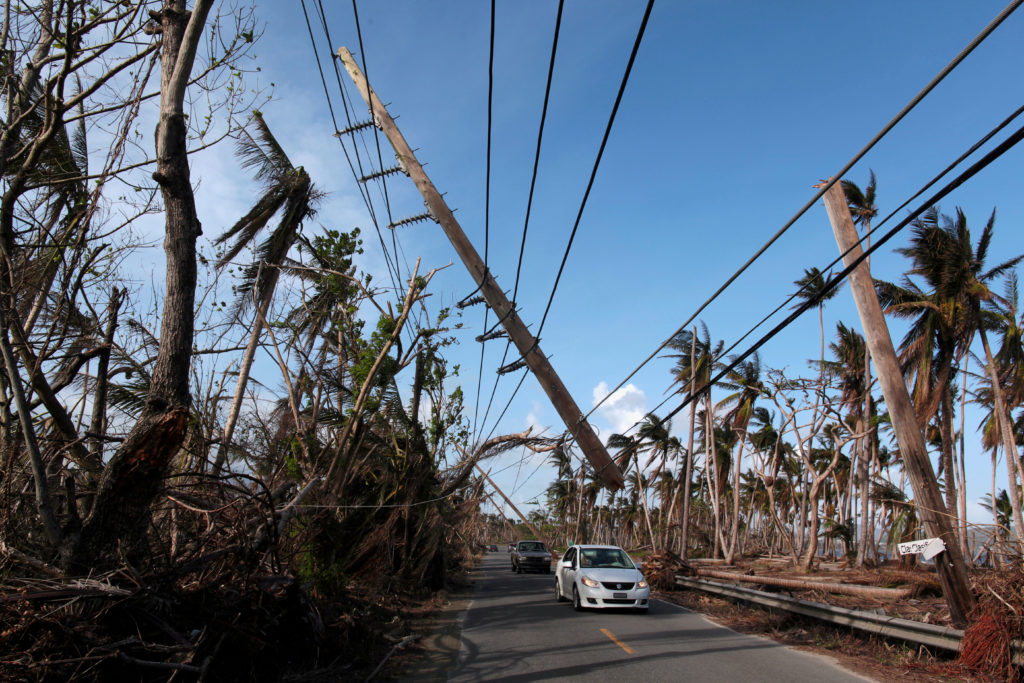 Cars drive under a partially collapsed utility pole, after the island was hit by Hurricane Maria in September, in Naguabo, Puerto Rico October 20, 2017. Photo by Alvin Baez/REUTERS

An accurate death count could be used to inform policies, supplement requests for aid in the national and international context and inform local governments as they prepare for future natural disasters that may impact Puerto Rico, particularly extreme weather events now that climate change is expected to worsen. Hurricane Maria was the first storm to destroy the power grid in Puerto Rico. Puerto Rico is six months away from the next hurricane season and experts predict it will be an active one.

Finally, minimized figures could weaken efforts to provide relief to communities affected by the hurricane at the local and international level. Given that Puerto Rico does not hold political power in Congress, and that the only representative does not vote, it’s crucial to convey the reality to all elected officials, so that their votes align with the necessities of those who are still in Puerto Rico.

Alexis R. Santos-Lozada is an assistant teaching professor in sociology and director of applied demography at Pennsylvania State University. This article was originally published on The Conversation on Jan. 3, 2018. Read the original article.

Left: A woman uses a flashlight at her home, after Hurricane Maria hit the island in September and damaged the electrical grid, in Dorado, Puerto Rico on November 17, 2017. Photo by Alvin Baez/REUTERS