Jamie Shupe entered the military years before most of the country had heard of the word “non-binary.”

Shupe, who uses the pronoun “they,” was born in 1963 and grew up in southern Maryland knowing that the way the rest of the world saw them — male — was wrong. But any efforts to correct that, or act less masculine, were met with abuse: a slap from their mother, someone calling them a “sissy.”

So they grew up side-stepping the issue by hiding how they felt. They always dated women — “that was shielding me” from more abuse, they said. At 19, after graduating from high school and looking for the next step, they entered the armed forces and stayed there for 18 years.

The next part of their story reveals a gap between the words that people like Shupe use to describe themselves and those that the state assigns. Now — in part because of Shupe, and buoyed by a growing movement for LGBTQ rights — state and federal agencies are confronting those issues as they apply to IDs for the first time. What happens next could make a huge difference for people who are neither male nor female, marking a new chapter in our understanding of gender. 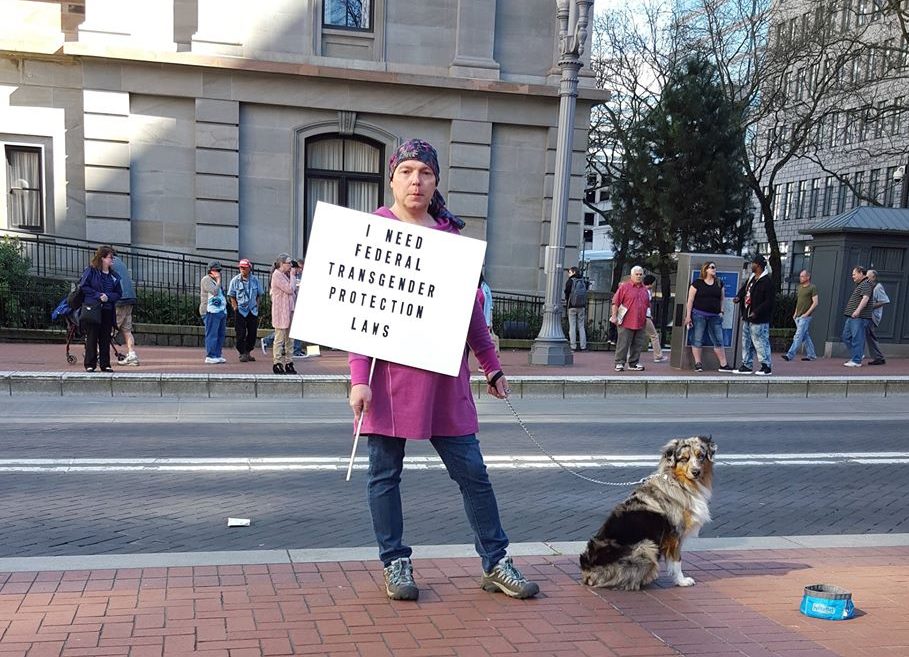 Jamie Shupe appears at at Pioneer Courthouse Square in Portland, Oregon, on March 31, 2016, on Transgender Day of Visibility. Photo courtesy of Jamie Shupe

‘One battle after another’

There were no openly transgender or gender nonconforming people in the military, Shupe said. “I was totally living in fear,” they said.

In the unit’s morning meetings, Shupe said the unit’s first sergeant, a religious Christian, would preach about Sodom and Gomorrah. Meanwhile, at home, Shupe was beginning to experiment with wearing women’s clothing, trying to understand why they felt so out of place. “I didn’t have an understanding that I was transgender,” they said.

The definition of “non-binary” and “genderqueer” can vary for different people, but both convey the feeling of living outside of the gender binary — in other words, outside of the “male vs. female” structure that is so predominant in everyday life. Some people who identify as non-binary are also transgender or intersex, and while some use the pronoun “they,” others stick to “he” or “she.”

READ NEXT: Exploring the genderqueer community

Nearly a decade into their service, Shupe’s gender dysphoria had intensified, and another few years later, they were discharged with an injury (unrelated to their gender identity), causing them to go into early retirement as their depression became worse and worse. After coming across a Reddit forum for transgender people and talking to their wife, they decided to transition to female.

But in rural western Maryland, where they were living at the time, “getting medical care was next to impossible,” they said. Shupe and their wife moved to Pittsburgh, where they found a clinic that allowed Shupe to begin hormone treatment. And in 2014, they filed to change the sex marker on their driver’s license from M to F.

The process to do this varies by state, and in about half the states in the U.S., a person must provide proof that they have medically transitioned with surgery or hormone therapy in order to change their license. In others, a note from a physician is sufficient. Shupe’s doctor helped them fill out the necessary papers, and they were able to get a license marked “F” from the state of Pennsylvania.

But Shupe was coming to realize that they did not identify with other transgender women. “The reason I wasn’t fitting in was because I wasn’t one,” they said. They moved to Oregon in November 2014, where they joined a genderqueer support group. “They totally clicked with me,” Shupe said.

In April, Shupe petitioned the Multnomah County court for a sex change — this time as non-binary. Petitioning a court is a standard procedure in states that require a court order before changing a person’s license. Though when the court granted the order, it was the first time that anyone had been legally designated as non-binary in U.S. history.

Shupe was thrilled and LGBTQ advocates celebrated as the case made headline after headline. But when it came to getting a license, “I knew right off the bat it was just going to be one battle after another,” Shupe said.

Nearly four months after filing that petition, Shupe doesn’t have a license that reflects their gender and no idea of when they ever will.

“When we have a change that goes through the legislature, we have months to study it and prepare for it before laws pass. This is different, because this came out of the blue. We didn’t have any advance warning of this,” he said.

Now, the agency is researching the question of how changing their system would affect how other agencies — for example, law enforcement — use and store shared data. From their research, “not a lot of jurisdictions” in the U.S. have ever looked into this before, House said.

When the decision came out, the Oregon DMV asked the state Department of Justice to research “what needs to change” in order for them to comply with the court’s decision, House said. But the department has not issued any guidance to them so far. “It’s going to be months or perhaps more than a year” before Shupe has an accurate license, House said.

The DMV isn’t the only one looking at these questions — so is the federal government. That case revolves around Dana Zzyym, an intersex and non-binary person who sued the State Department after they were denied a passport.

While filling out the forms to apply for a passport, Zzyym saw that the only available options were “male” or “female.” Instead of choosing one, they wrote “intersex,” which is not currently an available option for U.S. passports. After they were denied, LGBTQ advocacy organization Lambda Legal filed suit on their behalf against the U.S. State Department, seeking a gender-neutral option for U.S.-issued passports, according to Paul Castillo, who is currently representing Zzyym. 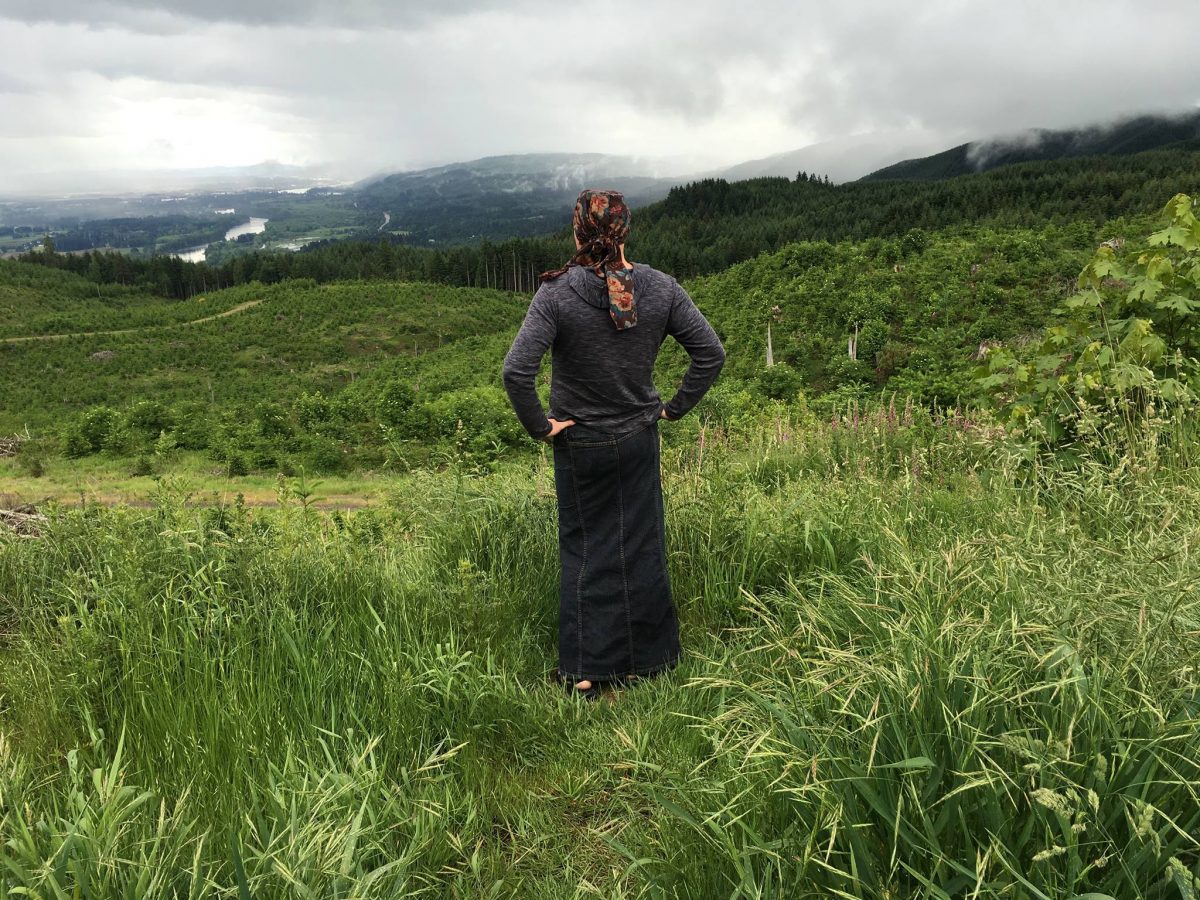 Jamie Shupe is awaiting word from the Oregon DMV on whether they can issue a license that reflects their gender. Photo courtesy of Jamie Shupe

Some groups, including Lambda Legal, believe that identification should leave off sex altogether. Some already do: New York City IDs, Social Security cards and a number of others do not require sex. Another option is to make the letter “X” an option for licenses and passports as an alternative to “M” or “F,” which is already in use in several countries, including Australia and New Zealand, under an existing international standard, Castillo said.

The U.S. currently recognizes passports from other countries that are labeled with an “X.” People holding those passports “are able to enter and exist in the U.S., assuming they meet all other visa requirements. Yet, our own citizens who are non-binary cannot even leave the U.S. with an accurate passport,” Castillo said.

In filings for the case, the State Department said that “Allowing passports with sex markers other than ‘F’ or ‘M’ would compromise the department’s efforts to prevent identity theft and passport fraud by upending the department’s long-established system for validating the identity and citizenship of passport applicants and requiring the department to rely on less reliable and less uniform identification documents.”

If the court issues a decision in Zzyym’s favor, it won’t be the first time the federal government has recognized the existence of nonbinary people. Castillo pointed to Section 1557 in the Affordable Care Act, the part of the law that prohibits discrimination based on gender identity. The section specifies that an individual’s gender “may be male, female, neither, or a combination of male and female.”

The Federal Register’s website provides more context on why the section reads that way: “The insertion of this clause helps clarify that those individuals with non-binary gender identities are protected under the rule.”

Castillo said a ruling in the Zzyym case may come within the next 1-2 months, which could affect existing standards for U.S.-issued passports. Meanwhile, in Oregon, the DMV “needs more time,” House said.

For people whose IDs are already inconsistent with their presentation, having an accurate ID could mean the difference between safety and harassment.

Ellie*, a transfeminine non-binary person in their late 20s, always feels nervous using their driver’s license as ID, since it lists their sex as male. “‘That’s not you’ [is] a frustrating response for me to get when I show someone my ID,” they said. “I feel better about having an ID symbol that I might need to explain to people than one they’ll think is incompatible with my appearance.”

And having an accurate ID may help public understanding of what non-binary means in general, said Michel*, who requested anonymity because they have not come out to many people.

“I have no intentions of coming out to my employer at the moment, primarily because they don’t seem to have a decent grasp on basic trans issues. Having an official form or ID might make it easier to come out,” they said.

For others, having another ID option would help mitigate the complications that arise when different documents say different things in situations like health care.

For Cyree Jarelle Johnson, these complications were particularly damaging. Johnson, who has lupus, had insurance documents labeled with an M, but their state ID was labeled F. That discrepancy meant that their primary care provider could not continue treating them under their insurance, and cost them months of care while they changed their driver’s license to match the insurance. If they had a gender-neutral option the first time they applied for an ID, they said, that conflict could have been avoided.

“It was extremely distressing,” they said. “I’m trans, I’m just not a trans man.”

Michele Herzog, who is 22 years old and non-binary, was shocked during a routine visit to a Planned Parenthood in Massachusetts to find that their forms only included a “male” or “female” option.

“I have a dating app that lets me choose from over 20 gender options, and a medical provider only gave me two?” she said. “I am a firm and trusting believer in Planned Parenthood, and I felt as though an organization I was proud of suddenly didn’t apply to me.” Planned Parenthood responded to her concerns on Twitter:

Each affiliate has their own forms. It would be great if you could reach out to the health center w/ your feedback as well (2).

When asked for comment, Planned Parenthood spokesman Liz Clark said that people’s experiences at different health centers may vary when it comes to patient intake forms, since the organization does not have one set of medical forms it uses across the country. She added:

We provide guidance in our national Medical Standards and Guidelines on creating a transgender-friendly health center — and that includes the need to recognize and respect a patient’s preferred name, pronoun and gender by ensuring that intake forms and electronic health records provide choices for gender and sex other than just male and female; and having a space for ‘preferred name’ and ‘preferred pronoun’ on all forms.

Even though some non-binary people worry a mark on their ID will invite more discrimination or harassment, Michel said, “any kind of legal recognition is better than nothing.”

*Name has been changed.

Left: Jamie Shupe is the first person in the U.S. to be legally designated as nonbinary. Photo courtesy of Jamie Shupe