In Denver, an immigration judge and her family are in self-quarantine after a doctor said she likely contracted COVID-19, the disease caused by the novel coronavirus. In Boston, immigration courts temporarily closed for deep cleaning after an attorney came down with virus symptoms. In Atlanta, an attorney who appeared in immigration court also felt unwell after worrying that he or she too had contracted the virus.

These scenes are unfolding across the country, where judges, lawyers and courtroom personnel are worried that the coronavirus could be spreading during ongoing immigration hearings, while much of the nation has hunkered down to blunt the virus’ transmission. That concern has led many of the people involved in those proceedings to band together to demand that the Trump administration stop all in-person immigration hearings, close down immigration courts and move to a system using telephonic or video conferences.

“At every court, everyone is in basically panic mode because the appropriate measures have not been taken to protect people from exposure.”

“At every court, everyone is in basically panic mode because the appropriate measures have not been taken to protect people from exposure,” said Ashley Tabaddor, the president of the National Association of Immigration Judges.

President Donald Trump has made cracking down on undocumented immigrants and illegal immigration a signature part of his agenda since taking office. He has separated immigrant families and their children, repeatedly accused undocumented immigrants of being criminals, and forced thousands of asylum seekers coming from the southern border to remain in Mexico as their cases move through the courts. Now, Tabaddor fears the Trump administration’s interest in prosecuting immigration cases is unnecessarily exposing people to the new coronavirus.

“It appears the health and safety of the community are secondary to law enforcement prerogatives of the department, or whatever other politics might be at play,” Tabaddor said.

The American Federation of Government Employees Local 511, which represents Immigration and Customs Enforcement (ICE) prosecutors, the National Association of Immigration Judges, and the American Immigration Lawyers Association are all urging the Department of Justice to make the changes as the U.S. government and top health officials stress the importance of social distancing as a public health necessity.

“The Department of Justice’s (DOJ) current response to the COVID-19 pandemic and its spread is insufficient and not premised on transparent scientific information,” the groups said in a joint statement Sunday. “The DOJ is failing to meet its obligations to ensure a safe and healthy environment within our immigration courts.”

The groups in recent days have increased pressure on the Executive Office for Immigration Review (EOIR), the arm of the Justice Department responsible for adjudicating all immigration cases. When asked about the pandemic, a spokesperson for the office said the office “continues to evaluate the information available from public health officials to inform the decisions regarding the operational status of each immigration court.” The official added that people working in the immigration courtrooms should “follow CDC guidance regarding hygiene practices.”

The guidance, from the White House and health professionals, has been to maintain at least 6 feet between each person. But that’s almost impossible to enforce, Ostrow said.

“The immigration courts need to close. Period,” said Jeremy McKinney, second vice president of American Immigration Lawyers Association, on a call Tuesday talking about the issues. “The status quo presents a grave danger to public health, not only to the litigants and EOIR employees, but also to the community at large.” 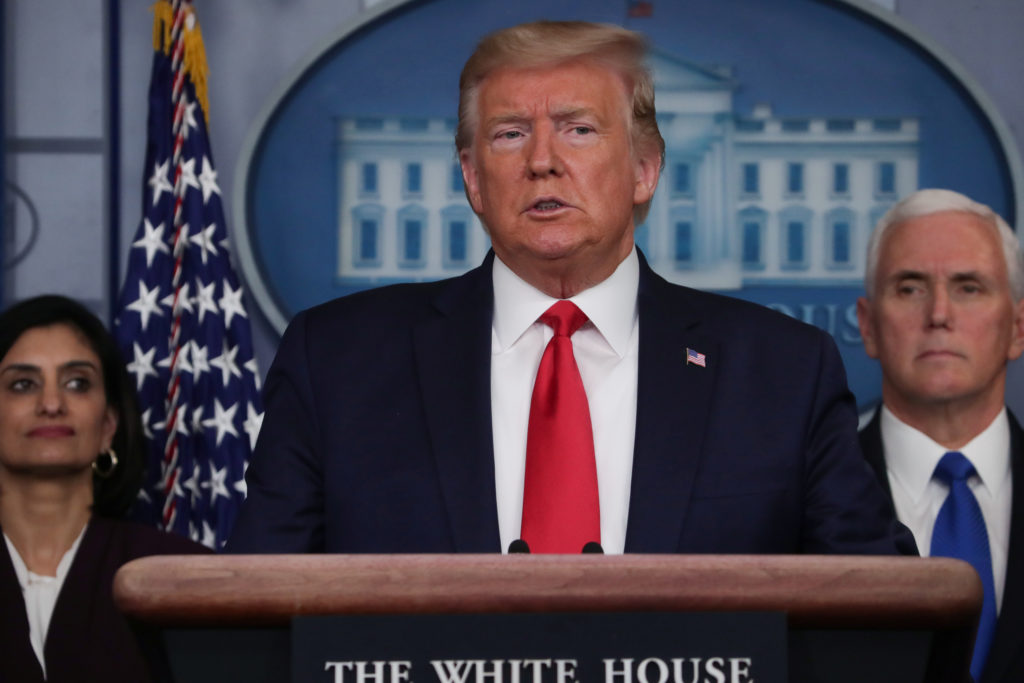 President Donald Trump addresses the daily coronavirus response briefing as Seema Verma, administrator of the Centers for Medicare & Medicaid Services, and Vice President Mike Pence look on at the White House in Washington, on March 18, 2020. Photo by REUTERS/Jonathan Ernst

The three groups believe keeping the courts operating in the current conditions is endangering the lives of everyone in the courtrooms and facilities, including judges, prosecutors, courtroom staffers, and migrants. There is also concern about the ripple effect those exposures could have on those people’s respective families. Because tests are not widely available across the country, judges and court workers are not sure whether people showing up for hearings are infected with the virus and spreading it to others.

“Guidelines from administration on social distancing require a 10 person limitation to congregating in one place,” said Fanny Behar Ostrow, president of the American Federation of Government Employees (AFGE) Local 511, which represents ICE prosecutors. “None of this is possible if the immigration courts remain open in accordance with the status quo. Immigration courtrooms are not large enough, and parties sit within arm’s reach of each other.”

She said something needs to change.

“Waiting rooms, elevators and hallways are crowded, particularly in large courts, such as in New York, Los Angeles and Miami,” she said. “Bathrooms are not safe because they are only cleaned once a day. Hand sanitizers are rarely available. In today’s climate holding in-person hearings is exacerbating these dangerous conditions.”

Without more specific guidance, the groups calling for the changes say immigration judges and other courtroom personnel have been largely left to make their own decisions on how to stem the spread of the virus. Those decisions include determining if someone who appears ill needs to be removed from court buildings.

When judges have tried to take individual action, the groups say, the Justice Department has intervened. Last week, the National Association of Immigration Judges sent out posters and encouraged judges to post them in English and Spanish so migrants and others in courtrooms could easily see best practices to prevent spreading the virus, including washing hands frequently and coughing into elbows. The posters were approved by the CDC, but the group says Justice Department officials quickly told judges the posters needed to be removed because judges didn’t have the authority to post the posters, even though the flyer had been federally approved. But within a day, the Justice Department reversed course and said the posters should never have been removed.

Outside of the courts, President Donald Trump has made a host of other immigration changes as the coronavirus outbreak grows.

On Wednesday, Trump announced that he would be “temporarily closing” the northern border of the United States with Canada to “non-essential traffic” and that a similar action on the southern border would soon follow. The move, which officials said will not apply to American citizens, Canadians or those with green cards, nor commercial traffic or goods, allows U.S. Border Patrol agents to stop anyone without proper documentation from entering the U.S. Agents would immediately return them to either Mexico or Canada without due process or any sort of court hearings. Those picked up by border agents would not be held for any length of time in an American facility.

Meanwhile, at immigration courtrooms nationwide, there is no change in guidance in sight, which means chaos and confusion around how to handle coronavirus will continue.

“There is constant fear and constant exposure,” said Tabaddor, the head of the immigration judges’ union. “It is so upsetting.”