In Biden’s unusual inauguration, many find optimism despite challenges ahead

President Joe Biden took the same oath of office as his 45 predecessors Wednesday, with his hand on a family Bible as past presidents and leaders in Congress looked on in a ceremony at the U.S. Capitol.

But in almost every other way, Biden and Vice President Kamala Harris’ inauguration did not resemble the transfers of power Americans have become accustomed to.

Biden, Harris and the other dignitaries on stage wore face masks, a symbol of the coronavirus pandemic that has killed more than 400,000 people in the United States. In another concession to the times, there were no spectators on the National Mall, which was fenced off after the attack on the Capitol two weeks ago that left five people dead. The Capitol complex was guarded by roughly 25,000 National Guard troops from across the country — more than at any time since the Civil War.

And in yet another break from tradition, former President Donald Trump, who one week ago was impeached by the House for inciting the attack on the Capitol and is now facing a trial in the Senate, was not on hand to welcome his successor to Washington, becoming the first outgoing president to skip an inauguration since 1869.

Biden attempted to turn the page on Trump’s tumultuous presidency in his inaugural address. The 46th U.S. president vowed to restore a sense of national purpose and unity following four years of deepening political and culture division.

But while the day belonged to Biden and Harris — the latter of whom became the first woman elected to the White House, as well as the first Black vice president and first of South Asian descent — the festivities were overshadowed to some degree by Trump’s final hours in office, and the presence of thousands of armed troops called in to ensure a peaceful transition.

The day started off with Trump bucking tradition by leaving the White House instead of sticking around to witness his successor take over. Trump’s absence was not a surprise; he said ahead of the inauguration that he would not attend.

Yet Trump still managed to send a shockwave through Washington in his last act as president, by staging a farewell sendoff at Joint Base Andrews that broke from every norm for an outgoing commander-in-chief.

Speaking to a small crowd of supporters, Trump took a victory lap in which he claimed that his administration laid the foundation for Biden to defeat COVID-19, at a time when the country is struggling to distribute vaccines and has seen record numbers of infections and deaths.

“You should start to see really good numbers over the next few months. I think you’re going to see those numbers really skyrocket downward,” Trump said. On Tuesday, the incoming head of the Centers for Disease Control and Prevention said another 100,000 Americans are expected to die from the virus by February.

Trump also touted his achievements in office, falsely claiming that he had delivered the “largest tax cut and reform” in the history of the country. He ended by promising that the country had not seen the last of him. “So, have a good life. We will see you soon,” Trump said.

With that, Trump and his family, including his adult children, boarded Air Force One and departed for the former president’s private club, Mar-a-Lago, in Florida. 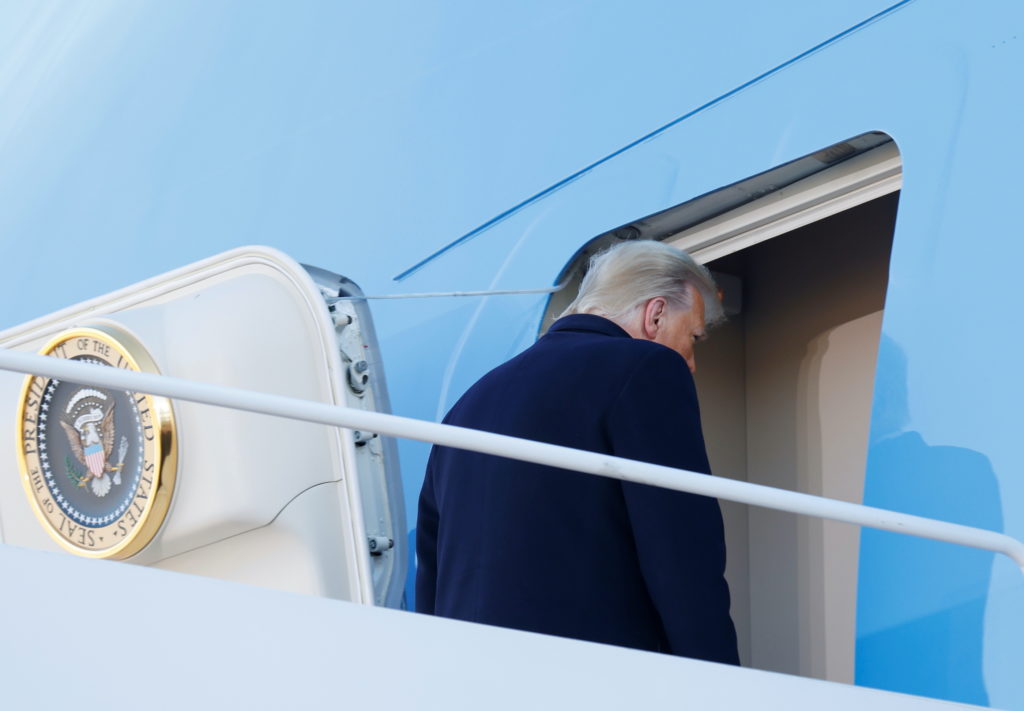 Minutes after he left, Biden and first lady Jill Biden left the Blair House, where they had spent the night, to attend mass at the Cathedral of St. Matthew the Apostle in Washington, D.C. Harris also attended the service, as did House Speaker Nancy Pelosi and other congressional leaders.

Hours later the country’s leaders assembled on the West Front of the Capitol. Former Presidents Bill Clinton, George W. Bush and Barack Obama shared a stage with members of Congress and Biden and Harris’ families. Former President Jimmy Carter, who is 96, did not attend.

Vice President Mike Pence represented the outgoing administration, a conspicuous stand-in for
Trump, who refused to concede the election and spent months after his Nov. 3 defeat insisting falsely that the election was stolen from him.

Reminders of Trump’s failed attempt to overturn the election, which culminated with the riot at the Capitol on Jan. 6, were everywhere. The Capitol was heavily fortified, with National Guard troops and law enforcement officials blocking access to the complex and shutting down traffic across downtown Washington.

The overwhelming show of military force appeared to work. There were no major protests or violence in Washington or at state capitols across the country, something officials had feared might take place on Inauguration Day. The streets around the Capitol were mostly empty, with few people out and about. It was a markedly different atmosphere from recent inaugurations, when hundreds of thousands of people flocked to the National Mall to watch a change in administrations.

Biden alluded to the Capitol siege in his inaugural speech, without once mentioning Trump by name.

“Here we stand just days after a riotous mob thought they could use violence to silence the will of the people, to stop the work of our democracy, to drive us from this sacred ground. It did not happen. It will never happen, not today, not tomorrow, not ever,” Biden said.

Biden acknowledged that the country’s political divisions were real. But left unsaid in his speech was the fact that he faces a complex series of immediate obstacles, including confirming Cabinet nominees, and balancing his legislative agenda with the looming Senate trial on Trump’s impeachment. Democrats and Republicans are debating when the trial should start and how it should proceed.

The inaugural address lasted a little more than 20 minutes. Once it was over Biden left to drop by the Capitol and Arlington Cemetery, review the troops and finally make his way to the White House, where he got to work signing his first round of executive orders. Many of them were aimed at dismantling Trump’s policies on climate change, immigration and other issues.

With that, the Biden presidency got underway.

Biden’s allies said he met the moment, projecting calm in a moment of national crisis. Many Democrats also said they breathed a deep sigh of relief when Biden was sworn in and Trump was officially no longer in charge.

“His message that we can find ways to disagree without being disagreeable — he’s been saying that since he got into the presidential race. He’s been saying that for years, ” said Steve Schale, who ran the main pro-Biden super PAC during the campaign.

Even Republicans, at least on Biden’s first day as president, said there was reason to feel some optimism about the country’s future.

“A presidency is ultimately measured by what is accomplished. Speeches don’t solve problems,” said Matt Mackowiak, a Republican strategist. Nevertheless, he said he felt encouraged by Biden’s call for bipartisanship, and his refusal to criticize Trump in his first speech as president. “He didn’t give an cheap shots. Biden is not a cheap shot kind of guy.”

Left: Joe Biden is sworn in as the 46th president of the United States by Chief Justice John Roberts as Jill Biden holds the Bible during the 59th Presidential Inauguration at the U.S. Capitol in Washington, U.S., January 20, 2021. Andrew Harnik/Pool via REUTERS