When a mass shooting happens, the events that follow are increasingly familiar. But what’s happening before someone pulls the trigger?

Following this week’s mass shooting in San Bernardino, California, the PBS NewsHour analyzed news reports of 354 shootings where at least four people were killed or wounded to understand where and when gun violence erupts in America.

Through Dec. 4, 464 people died and 1,318 people were wounded as a result of such shootings this year, according to data pulled from the Guns Are Cool subreddit group and the Mass Shooting Tracker dataset, which the group maintains through crowdsourced reporting. 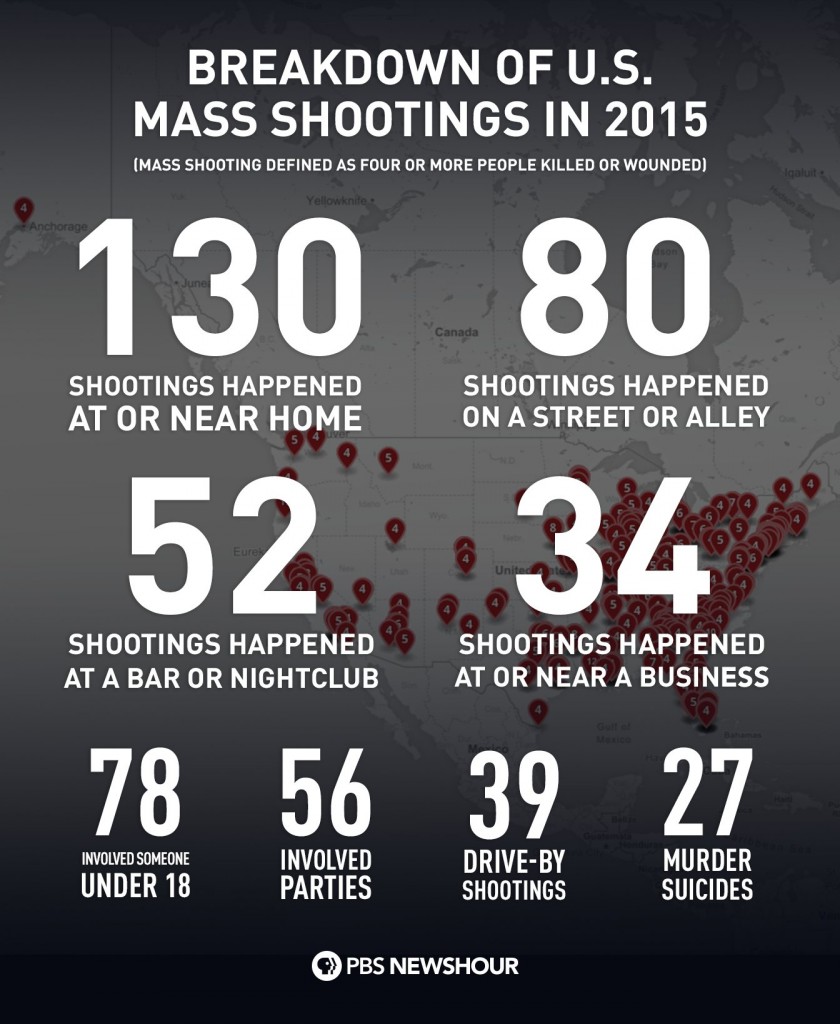 Of those victims mentioned in initial media reports in 2015, about one-fifth were under the age of 18, the data shows.

More than one-third of victims in this dataset were in or near their homes when a shooting occurred.

Often, these people were shot while they sat in a living room, relaxed in a backyard or chatted with neighbors on an apartment building’s stoop, according to the data.

One out of six took place during parties, often while celebrating a birthday or graduation. About the same number unfolded in or near a bar or nightclub, the data says.

And about one out of 12 of these shootings were murder-suicides that usually unfolded in a family home.

The Mass Shooting Tracker data, however, is not perfect. For example, Adam Lankford, a criminal justice professor at the University of Alabama, said some people might argue that the dataset’s threshold is overly broad.

He pointed to a 2014 study from the Federal Bureau of Investigations that defined and counted mass shootings more conservatively but still showed a rise in such violence in the last decade.

But one reason why the Mass Shooting Tracker data exists is that there is no single official way to define a mass shooting.

Since 1996, the Centers for Disease Control and Prevention has not researched gun violence in America, the Washington Post reported. And the absence of a formal definition for major shooting events hinders further research about mass shootings.

And the absence of a formal definition for major shooting events hinders further research about mass shootings.

“However you talk about the problem, or type of shooter or shooting, that defines your results,” Lankford said.