Everything we know about the San Bernardino shooting

Two assailants shot and killed 14 people and wounded 21 others at a holiday party for county employees in San Bernardino, California, on Wednesday.

The suspects were identified as Syed Rizwan Farook, 28, and his partner Tashfeen Malik, 27. Authorities said they had assault rifles and semi-automatic handguns, and were dressed in “assault-style clothing,” reported the Associated Press.

The assailants stormed the Inland Regional Center in the city of about 200,000, directly east of Los Angeles, at about 11 a.m. Pacific Time on Wednesday.

The San Bernardino County Department of Public Health had rented the space for a banquet.

RELATED RESOURCE: Map of all the mass shootings in 2015

Farook, who was born in Illinois and grew up in Southern California, was an environmental inspector for the county’s health department, where he worked for five years. A witness said Farook attended the banquet with his colleagues, stepped out briefly, and the shooting began. The suspects fired between 65 and 75 rounds at the center, the police said. It was unclear whether they were targeting anyone in particular.

Farook and Malik, who relatives said were married, fled the scene in a dark-colored SUV. After a tip led police to an SUV that matched the description, authorities pursued and surrounded the vehicle. The suspects were killed in a confrontation with police on a suburban street.

One body lay in the street and another was removed from the backseat of the SUV. Two officers sustained non-life-threatening injuries during the crossfire.

Farook and Malik had dropped off their 6-month-old daughter with Farook’s mother earlier Wednesday morning, saying they were going to a doctor’s appointment, according to Hussam Ayloush, executive director of the Council on American-Islamic Relations.

“Why would he do something like this? I have absolutely no idea,” said Farhan Khan, who identified himself as married to the sister of one of the suspects, at a press conference the next day. 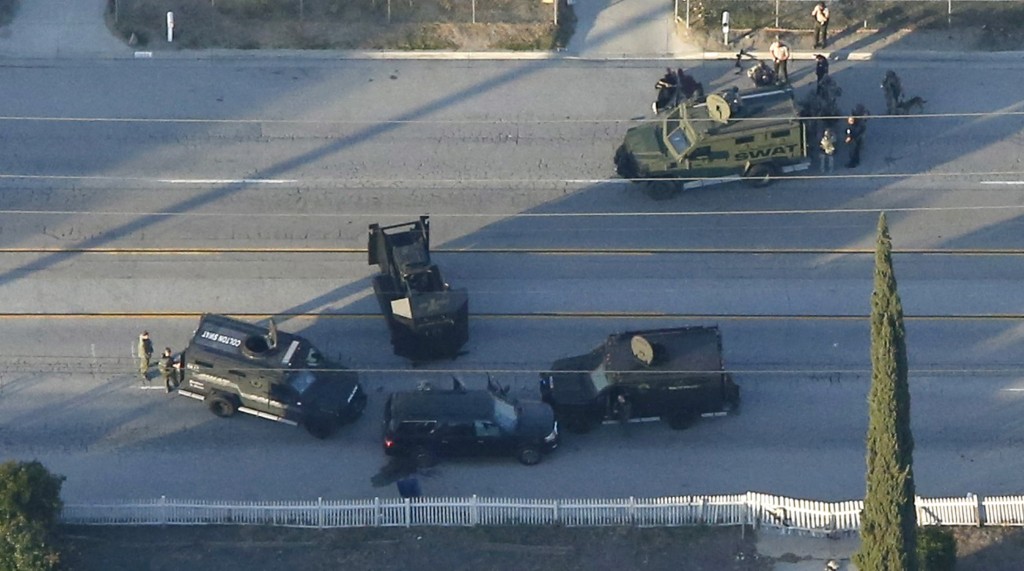 Police say the SUV they stopped was the getaway vehicle from a shooting in San Bernardino, California, on Wednesday. Photo by Mario Anzuoni/Reuters

The FBI investigated the mass shooting as an “act of terrorism” and determined that the two killers were not part of any terrorist network or cell, said FBI Director James Comey on Friday.

He said the investigation so far did not yield any contact between either of the killers and terrorist organizations that would have raised them on the FBI’s radar.

San Bernardino Police Chief Jarrod Burguan said there was “some degree of planning” at a press conference on Thursday.

All four guns recovered from the scene were legally purchased, police said, adding that two of the weapons belonged to Farook.

Police detonated three explosive devices left at the center. All three bombs were attached to a remote control device that didn’t go off.

Police said they also found 12 pipe bombs, more than 4,500 rounds of ammunition and hundreds of bomb-making tools in the garage of a California home that was searched after the shooting.

At their home, the shooters appeared to have crushed their cell phones and attempted to destroy their digital fingerprints, said David Bowdich, assistant director of the FBI’s Los Angeles division.

Malik reportedly used an alias on Facebook to show support for the Islamic State group’s leader, but deleted the message before Wednesday’s attack.

Farook was in contact on social media with possible extremists, a senior U.S. law enforcement official told the AP. An unnamed official, however, told the Washington Post that some of these connections were years old and not substantial.

Authorities released the names of the 14 people killed:

Thousands gathered Thursday night for a prayer vigil at a minor-league baseball park in the city.

Speaking from the Oval Office that day, President Barack Obama said the nation needed to take basic steps to make it harder, not impossible, for people to get access to guns.

“We see the prevalence of these kinds of mass shootings in this country,” the president said. “And I think so many Americans sometimes feel as if there’s nothing they can do about it.”

Reaction on Twitter included commentary on gun laws and words of comfort for the suffering:

This hate between liberals and conservatives is sickening. Lives are lost. Where’s the UNITED in United States? #SanBernadino — Christine Macdonald (@thatgalkiki) December 3, 2015

Wishing for a world with no violence. My heart goes out to #SanBernadino — Intern Joe (@MrJoeExtreme) December 3, 2015