Across the country, advocates say a growing number of cities have been criminalizing homelessness. 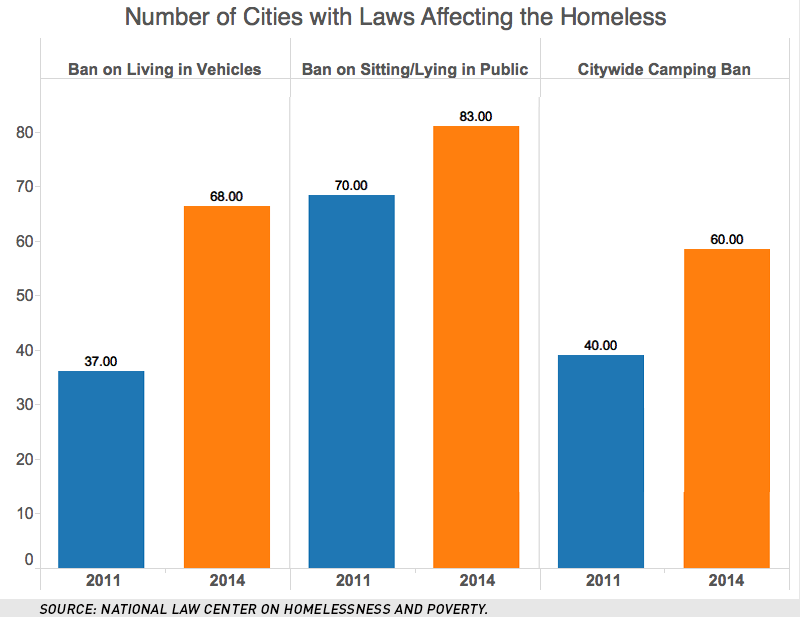 According to a 2014 survey of 187 cities by the National Law Center on Homelessness and Poverty, the number of cities with municipal bans on camping or sleeping outside has increased 50 percent since 2011.

The bans included various activities from camping and sitting in particular outdoor places to loitering and begging in public to sleeping in vehicles.

(The bar chart to the left shows the proliferation of ordinances banning these activities.)

Nearly a third of homeless individuals were considered “unsheltered,” or living on the street, parks or in vehicles, in 2015. While that figure has been on the decline since 2007, it still remains stubbornly high in major cities.

Last year, the nation’s 50 largest cities saw an overall 11 percent increase in ‘unsheltered’ homeless individuals, according to the U.S. Department of Housing and Urban Development.

Using data from the 2014 report “No Safe Place” by National Law Center on Homelessness and Poverty, the interactive map below shows the cities across the country that have instituted bans on sleeping outdoors, sitting and loitering in public places and living in vehicles.

Watch the full report from PBS NewsHour Weekend on the debate over how to treat the homeless in Sarasota, Florida, as more cities crack down.

Chasing the Dream: Poverty and Opportunity in America is a multi-platform public media initiative that provid es a deeper understanding of the impact of poverty on American society. Major funding for this initiative is provided by The JPB Foundation. Additional funding is provided by Ford Foundation and the Annie E. Casey Foundation.